Two revellers have been treated for suspected drug overdoses at Festival X, just hours after a man was rushed to hospital from Spilt Milk, and a second treated at the party.

A man was found unresponsive on a park bench during Festival X at Sydney Olympic Park, about 4pm on Saturday, The Daily Telegraph reported.

Paramedics treated the man, aged in his 30s, outside the main entrance to the showground, while police watched on.

After the man was revived, he was taken by buggy into the festival’s medical section.

A man, believed to be in his 20s, was partying at the Spilt Milk festival (pictured) at Victoria Park in Ballarat, on Saturday

Another reveller was treated at Festival X by emergency services for a suspected overdose at about 8pm, The Daily Telegraph reported. The partygoer was then taken to hospital.

In Victoria, two men were treated for suspected drug overdoses at Spilt Milk on Saturday.

A man, believed to be in his 20s, was rushed from the festival at Victoria Park in Ballarat to Ballarat Base Hospital where he is fighting for his life.

The young man could be moved to Melbourne hospital if his condition worsens, Nine News reported.

Another man at the same festival is also undergoing treatment following a suspected drug overdose. His condition is unknown.

Hundreds of extravagantly-dressed attendees started filtering into the Sydney Showgrounds from 1pm in preparation for a star-packed line-up set to rock the city’s west. 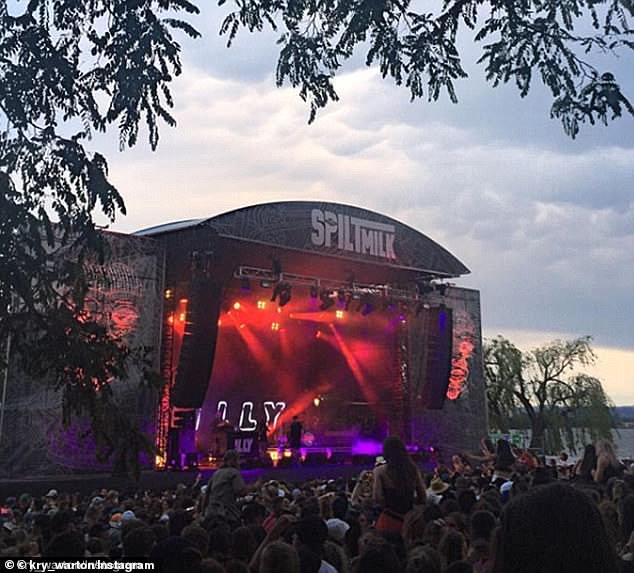 They were joined by a heavy police presence and a team of sniffer dogs in an effort to stamp down on drug usage.

Dozens of police officers were positioned at the main gates as revellers made their way into the venue early on Saturday afternoon.

The festival will move onto Melbourne on Sunday.

The heavy policing comes after an inquest on music festival deaths in New South Wales in July.

Daily Mail Australia does not suggest anyone pictured in this article is involved with drug use.