Two Britons working on the party island of Ibiza decided to make the most of finding a fellow countryman’s mobile phone after he lost it at a club – and held it for ransom in exchange for pizza.

They were able to make contact with the owner, Adam Fleming from Birmingham, and agreed to return the phone the following day, if he brought them a meal from Pizza Hut.

The pair even included a series of warnings, including a funny snap of the mobile phone tied to a chair, and that the phone would ‘lose a button’ if he went to a cheaper takeaway.

When Mr Fleming tried to barter – offering onion rings instead – they sent a photo of the phone dangling precariously over a toilet to show they meant business.

However, the tale had a happy ending, with the pranksters returning the phone and Mr Fleming gratefully handing over a pizza as thanks for them finding and giving it back.

Now back on home soil, Mr Fleming has commended the pair for their creativity and admits he was just glad it didn’t get into the hands of thieves.

Mr White, from Tamworth, Staffordshire, said: ‘We were at Privilege and Kelly-Anne found the phone when it started ringing. 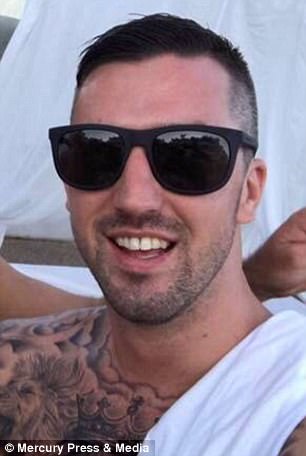 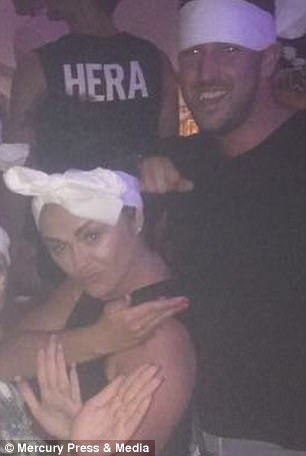 Reiss White, pictured left and right with Kelly-Anne Philipp, found the phone in a nightclub on the Spanish party island of Ibiza and demanded pizza in exchange for its safe return 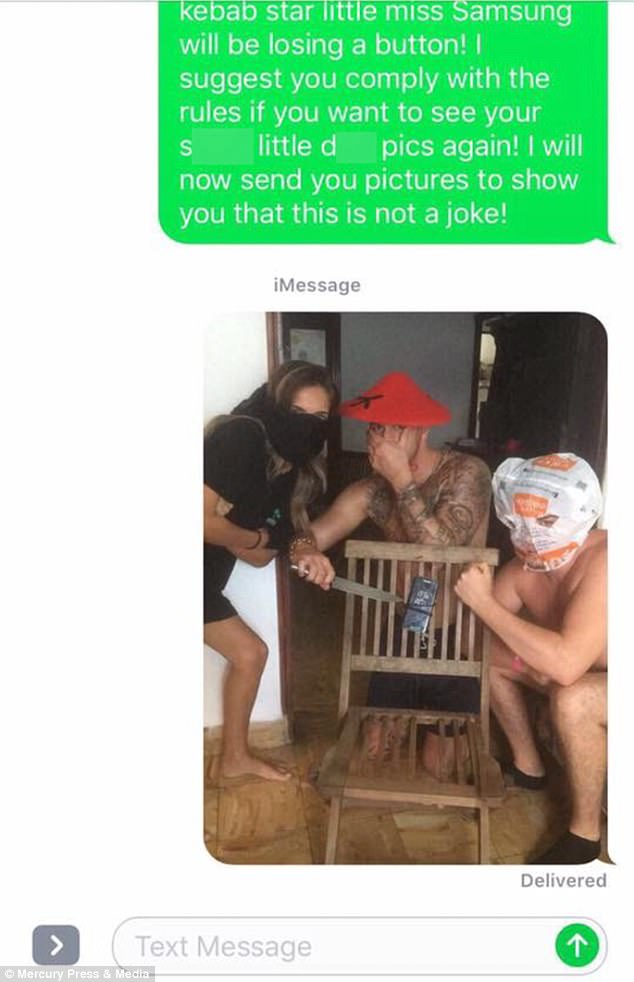 Jokers: The pair even included a series of warnings, including a funny snap of the mobile phone tied to a chair

‘She answered it and it was the guy’s friend so we got his number and was texting the guy on that phone.

‘She kept the lost phone safe while we carried on partying and we agreed to meet the guy after his boat party.

‘After a while, we thought ‘let’s have a bit of fun here’. We were heading to a takeaway anyway because it was that time of the night, around 3am, so we told him to pick us up a pizza.’

The original ransom text read: ‘So you have two options: At the minute your phone is in one piece.

‘If you want you want [sic] it to stay that way you will have to make your way to Pizza Hut where you will order a meat feast pizza – not a slice, the whole pizza – with garlic dip and BBQ dip and 18 chicken rocks!

‘You will bring it to a location that I will send you at 21.30. You will then have 15 minutes to bring to the location.

‘If for any reason you are one minute late the phone will be sold to a looky kooky [sic] man for a score.

‘If you think you can cut corners and save money by going to Kebab Star, little miss Samsung will be losing a button. 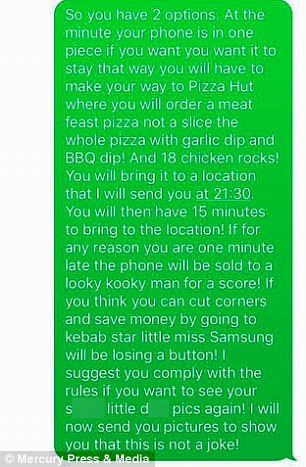 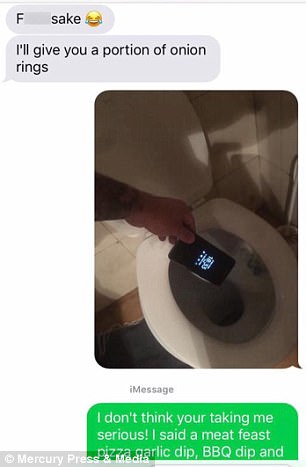 ‘Threats’: The pranksters demanded a pizza and fried chicken in exchange for the phone, and threatened to drop it into a toilet

‘I suggest you comply with the rules if you want to see your sh***y little d*** pics again. I will now send you pictures to show you that this is not a joke.’

The duo then mocked up an image of the phone tied to a chair while the two of them and a pal held a knife to it, covering their faces with makeshift masks and hats.

Mr White said: ‘In the end, he asked us to give him the pin for his card in his phone. We told him we were only joking but he did it anyway.

‘He was laughing as well and I think he just appreciated that we’d not just stolen the phone.

‘He bought us a 14inch Meat Feast pizza and came to meet us with a friend.

‘Once he’d got his phone I think he went back to the hotel and we didn’t see him again.

‘I’m certain he saw the funny side because he was laughing as he approached us and he was just happy it had been returned. It was just a bit of banter.

‘We always enjoy a mess-about on nights out.’

As the young men returned home, they discovered they lived just 20 minutes away from each other in Birmingham.

Mr Fleming, a business development manager, has admitted the two friends were ‘really funny and nice about it’ and claims after seeing his mobile was safe, he wanted to ‘give them credit for their creativity’. 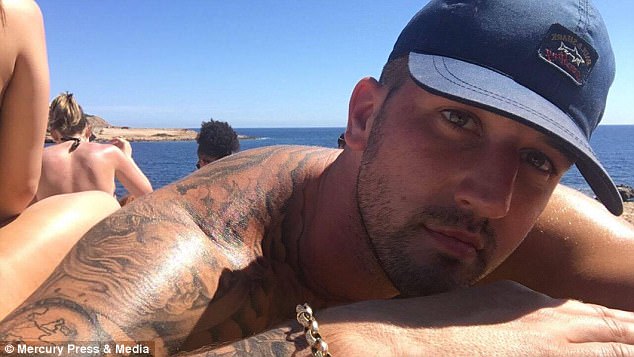 Prankster: Mr White, from Tamworth, Staffordshire, found out he only lived 20 minutes away from Mr Fleming back home in Britain

Mr Fleming, 26, said: ‘It was a bit weird at first. When the messages started to come in I thought it was a bit odd and it didn’t look good but I was laughing the whole time.

‘I had come to terms with losing my phone but when I saw my phone being held for ransom I wanted to give them credit for their creativity.

‘I told them I would get them a pizza for getting my phone back to me. It is a good job I’ve got a good sense of humour.

‘There was a bit of worry at first because you can’t be too careful but we were just laughing and thinking, ‘this has to be a joke.’

‘They asked for a picture to finish the story and I said you can do whatever you want with it [the picture] as long as I get my phone back. I really needed it.’

Mr Fleming claims he was just thankful to have his phone back in his hands as priceless holiday snaps were saved on it. He believes buying takeaway for the brazen bunch was a small price to pay for the safe return of his Samsung.

He said: ‘They are life savers, I have all of my holiday pictures on there. It would have been a bit s**t to lose it.

‘They were really funny and nice about it. I couldn’t really complain. I was lucky it got into their hands and not a**eholes.’