Pair who forced their Romanian housemate to ‘live like Harry Potter’ under the stairs, ordered him to dance for them and gave him £1 a day for biscuits are found guilty of slavery

A man and woman have been found guilty of keeping a housemate as a slave – forcing him to live in a cupboard under the stairs ‘like Harry Potter’.

The victim, 31, was made to carry out forced labour and his captors controlled his finances and stopped him from eating or drinking in the house.

He was made to eat highly spiced food while he was mocked and ordered to dance and carry out physical challenges.

Upon finding him, police noted that he had sores on his feet and appeared malnourished. 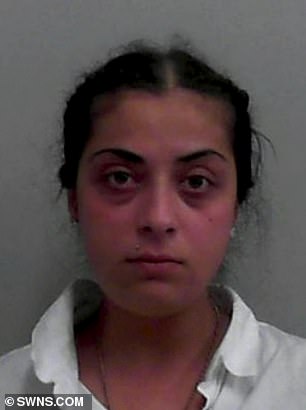 The victim worked full time at an abattoir earning £300 to £350 a week – but he was given just enough money to buy his bus tickets and around £1 a day for biscuits.

He was even made to drink out of an outside hosepipe and use woodland when he needed the toilet and had eggs and flour thrown at him.

The man had been using the cupboard under the stairs as a bedroom like ‘the boy wizard Harry Potter’, a court was told.

Neighbours called police after seeing him washing in the garden in a basin fashioned from a pile of rocks.

Ion Boboc, 26 and Christiana Tudor-Dobre, 24, were convicted of requiring a person to perform forced or compulsory labour and fraud. 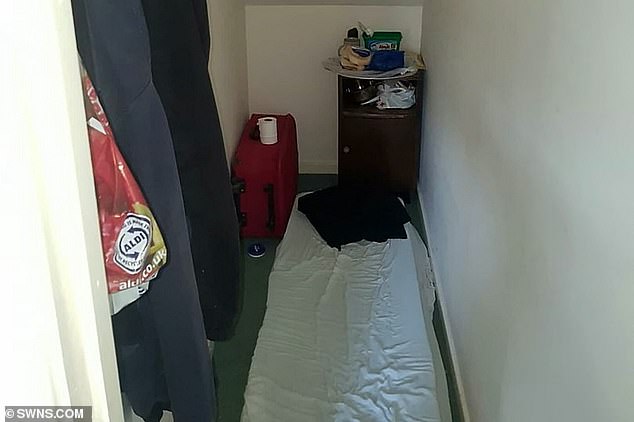 Cupboard under the stairs where the man was forced to live at the address in St Anne’s, Bristol

Mihai-Aurel Dan, who was also standing trial, was cleared of both charges. All three are from the St Anne’s Park area of Bristol.

Mr Thomas said: ‘Police were surprised when the victim emerged from the cupboard under the stairs. He looked dishevelled.’

Important documents such as his ID card, bank card, financial papers, and multiple phone contracts were in a bedroom used by Boboc and Tudor-Dobre.

The jury also heard that the victim was filmed carrying out tasks set by the defendants. 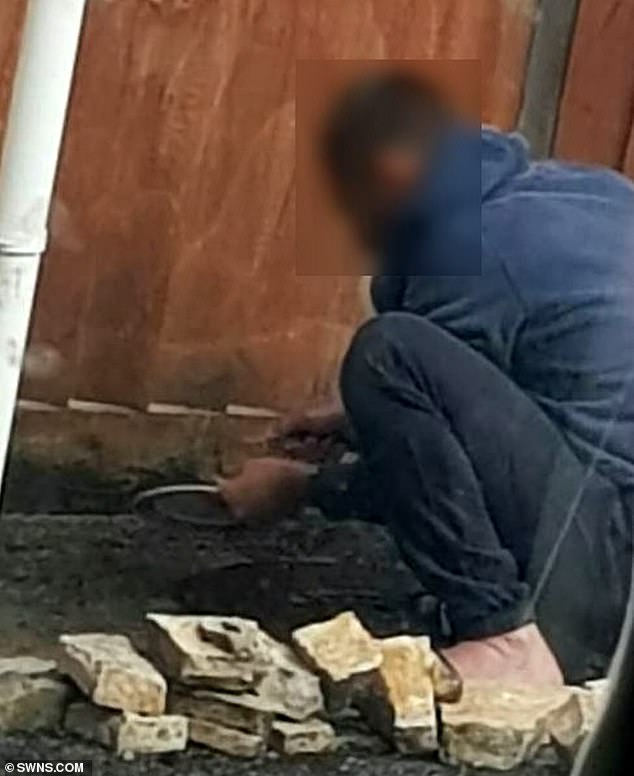 The 31-year-old man seen washing dishes outside the address. He was spotted by neighbours

The victim eventually revealed that he would have to wash his clothes in the town centre and was not allowed to eat or wash inside the house, with no use of the kitchen.

Ben Samples of the CPS said: ‘I would like to commend the victim for the incredible strength and bravery he showed in giving evidence and supporting the prosecution, despite the degrading treatment he suffered at the hands of the defendants.

‘I would also like to thank the members of the public who contacted the police with their concerns. Modern slavery often takes place out of sight, and it is only with the support of such witnesses that we will defeat it in the UK. 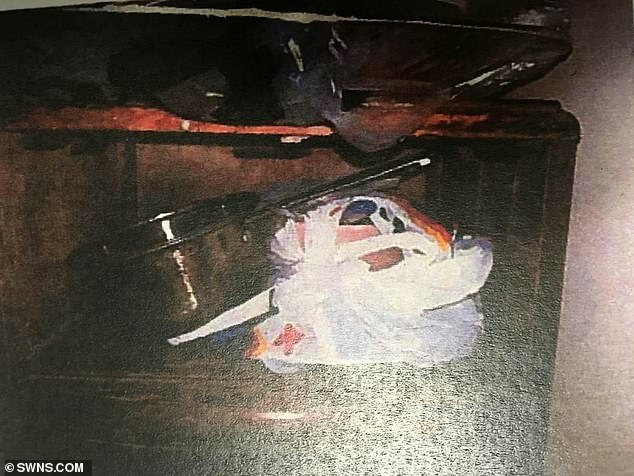 Some of the items belonging to the victim, including a single pot for cooking

‘Finally, I would like to give credit to Avon and Somerset Police, who acted swiftly following the report and built a strong case against the defendants, working in partnership with the CPS South West Complex Case Unit.’

Officer in the case PC Roger Ibrahim said: ‘Without the information through the Modern Slavery Hotline this abuse would still be happening.

‘When we found this man he appeared underfed and was suffering from sores on his feet. No one should be treated in this way.’

The duo will be sentenced for their crimes on March 19.