A rescue team searching for a missing British climber in Pakistan has found a snow-covered tent and evidence of an avalanche.

Tom Ballard, 30, has not made contact since Sunday when he was 20,000ft up Nanga Parbat mountain, and initial rescue efforts were halted when Pakistan closed its airspace amid the Kashmir crisis.

The climber, whose mother Alison Hargreaves died on K2 in 1995, was attempting to scale Nanga Parbat with Italian comrade Daniele Nardi, 42.

A planned rescue mission was aborted when Pakistan closed its airspace after planes were shot down amid spiralling tensions with India over the Kashmir region.

Today two military helicopters were drafted in to search for the missing climbers and found a tent and traces of an avalanche.

Tom Ballard, 30 (left), and 42-year-old Daniele Nardi (right) have been missing since Sunday while attempting to climb Pakistan’s ‘killer mountain’ (pictured during the climb) 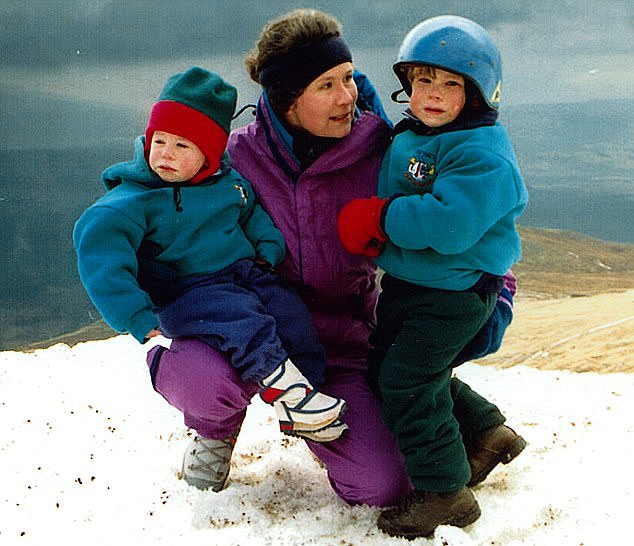 The Italian ambassador in Pakistan, Stefano Pontecorvo, said a search was authorised after talks with the military’s aviation commander.

He said a team of Russian volunteers currently on K2, about 120 miles away, could also be transported to Nanga Parbat to help the search.

‘Notwithstanding there is a no-fly zone, the army helicopters are flying. They are surveying the areas in which Daniele Nardi and Tom Ballard should be,’ he said.

Thomas Drew, the British high commissioner to Pakistan, was also involved in the talks to begin search and rescue attempts. 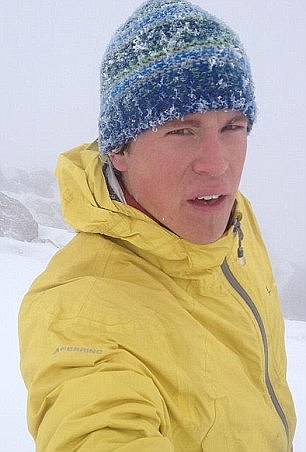 A statement on Mr Nardi’s official Facebook page, posted on Thursday in Italian, said an initial reconnaissance flight failed to find the climbers.

The helicopter returned to a nearby heliport to refuel ahead of a planned second search, the statement said.

Ali Sadpara, a Pakistani mountaineer who has previously climbed Nanga Parbat, is also aiding the search.

The Foreign Office said it is working with Pakistani authorities.

Mr Ballard’s mother was the first woman to solo-climb Everest without oxygen, in 1995.

The feat was part of her attempt to climb the world’s three highest mountains unaided in the same year.

But in August 1995 she was killed descending from the summit of K2, the world’s second-highest peak.

Hargreaves was blown off a ridge by 260mph winds amid an unexpected hurricane and her body has never been found. Ballard was six years old at the time.

Nonetheless he followed in his mother’s footsteps and become the first person to climb the great north faces of the Alps solo in winter and in the same season. 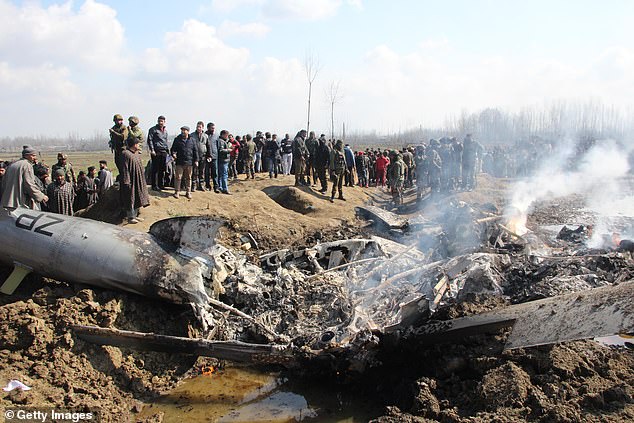 Pakistani climbers have agreed to mount a search operation for Ballard and Nardi but have been delayed after airspace around the mountain was shut due to clashes with India (pictured, an Indian air force jet shot down over Kashmir)

Nardi is an experienced altitude climber and has attempted to climb Nanga Parbat during winter on several occasions, none of them successful.

Nanga Parbat became known as the ‘killer mountain’ after a series of attempts to climb it during the 1930s ended in the deaths of dozens of climbers.

The most infamous accident came in 1937 when seven Germans and nine Sherpas were killed by an avalanche.

Three years earlier a separate expedition claimed the lives of four German climbers and six Sherpas, who died of a combination of altitude sickness, exposure to a severe storm, and sheer exhaustion.

Nanga Parbat is one of 14 mountains in the world to measure more than 8,000m (26,000ft in height), known as the eight-thousanders.

It is the world’s ninth highest peak and the second-highest in the Himalayas after Everest. 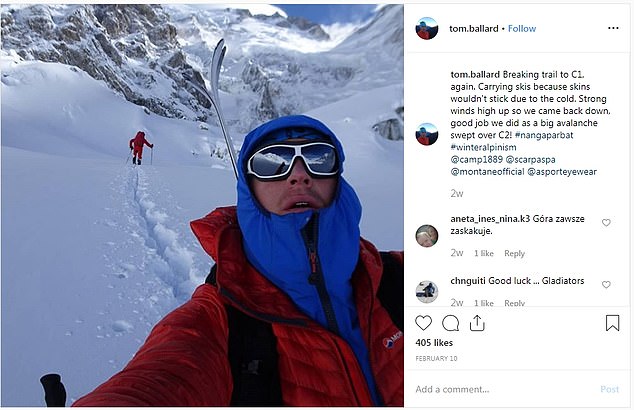 Ballard (pictured during the climb) is not an experienced altitude climber, but made a name for himself by becoming the first person to climb the great north faces of the Alps in a single season and in winter 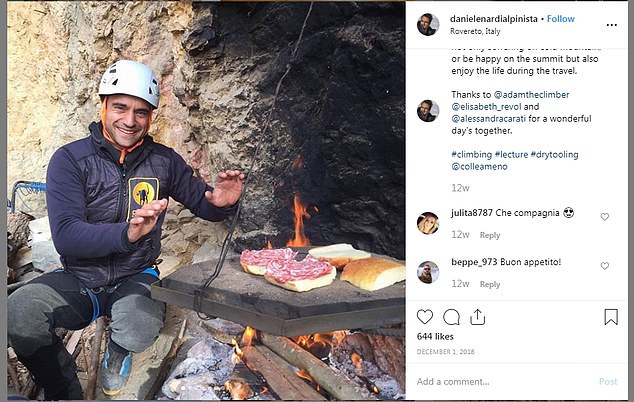 Nardi is a more experienced altitude climber having made several attempts to climb Nanga Parbat during winter, each of them unsuccessful