A Pakistani baby girl who was born with an abnormal bulge on the top of her head is desperately waiting for life-changing surgery.

Anila Ali, from Dokri in the Sindh province of Pakistan, was born with an unusually large, soft head, which doctors diagnosed as a severe form of craniosynostosis.

This is thought to be causing pressure to build inside the three-month-old’s head, which is forcing her brain to spread outside of her skull.

Medics are baffled as to how to treat the newborn, who also suffers from a severe form of spina bifida, which they claim has caused a tumour to develop on her back. 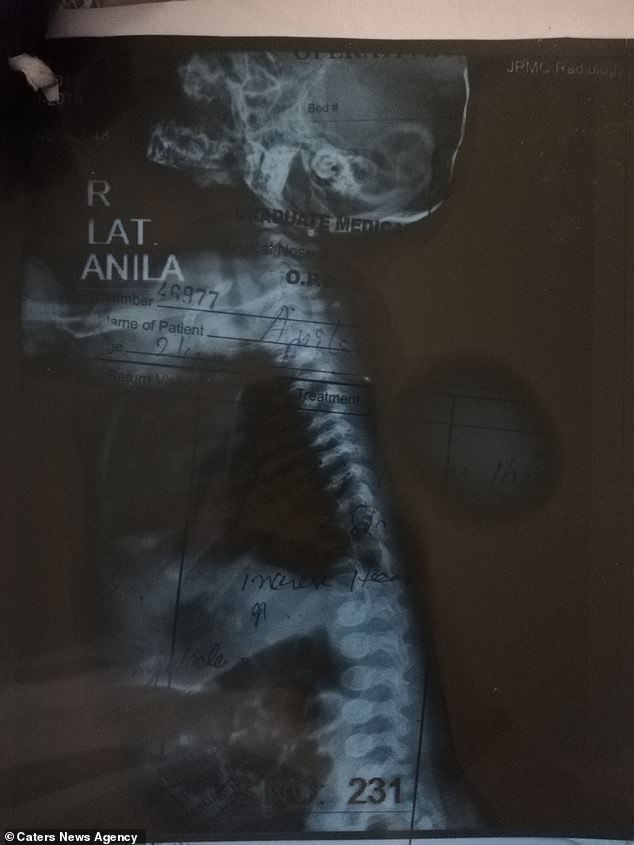 Anila also suffers from myelomeningocele, which is considered the most severe form of spina bifida. X-ray shows how her spine and spinal cord did not form or close properly in the womb 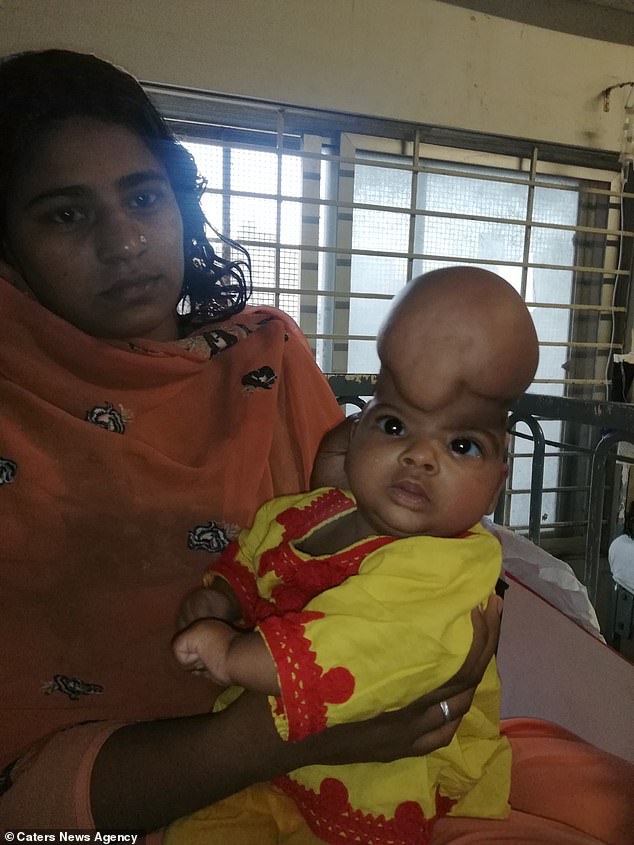 Anila’s 19-year-old mother Naushaba, said: ‘I was happy when I gave birth to Anila, my first child, three months ago in a private clinic.

‘But, I got afraid when I first saw her head.

‘Her head was not developed properly and doctors told us to take her to the children hospital in Larkana.

‘Her head was so soft that doctors told us that even a small injury on her head can do her a lot of damage.’

Naushaba and her husband Amad Ali, 21, took Anila to Larkana where doctors then advised them to take her to Jinnah Post Graduate Medical Centre in Karachi.

Unable to afford to make the 270-mile (430km) journey, the couple’s friends and family gave them £800 to cover the cost of their travel and stay in Karachi.

Amad, who earns just £4 a day as a daily wage labourer, said: ‘We took a lot of loans to arrange a visit and stay in Karachi.

‘I wish our daughter gets the right treatment here.’

Craniosynostosis is a rare skull problem that causes a baby to be born with, or develop, an abnormally shaped head.

It is rare, affecting an estimated one in every 1,800 to 3,000 children. Three out of every four cases affect boys.

The irregular skull shape in craniosynostosis can cause persistent headaches, learning difficulties, eye problems and other symptoms.

Craniosynostosis is the result of the premature fusion of different sections of the skull.

This means the skull is unable to grow in affected areas.

When one area of the skull is prevented from growing, other areas may ‘overgrow’ to compensate and limit the pressure developing around the brain.

As well as crainosynotosis, Anila also suffers from myelomeningocele, which is considered the most dangerous form of spina bifida.

This occurs when a baby’s spine and spinal cord do not form or close properly in the womb.

Professor Raza Rizvi, head of neurosurgery at Karachi’s Jinnah Post Graduate Medical Centre, said: ‘The patient [was] admitted [to] our hospital and we are monitoring her.

‘Anila has crainosynotosis. Her brain is spread out of her skull. She also suffers from myelomeningocele’.

Professor Rizvi claims Anila’s myelomeningocele has caused a ‘small tumour’ to develop on her back.

This can occur if the spinal cord and its nerves become tangled in a benign fatty growth.

‘We will start by operating [on] her for myelomeningocele and we are yet to decide on how we will proceed with her skull surgery,’ Professor Rizvi said.

‘A brain reconstructive surgery is possible but that could be very risky as the patient is very young.’

Complications of the surgery may include stroke, seizures, nerve damage and spinal fluid leakage. 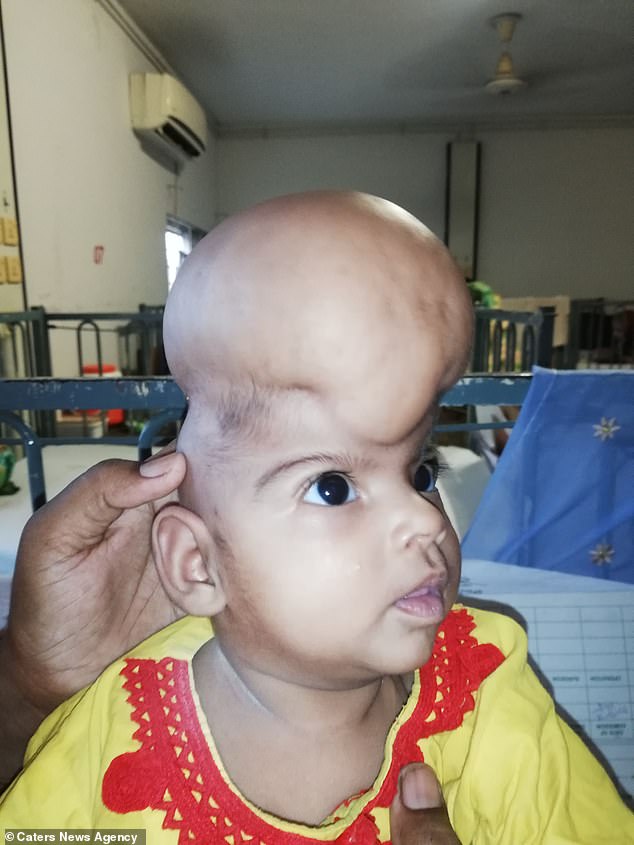 Anila is thought to have a build-up of pressure inside her head, which is forcing her brain to spread outside of her skull. Medics worry brain reconstructive surgery will be too risky 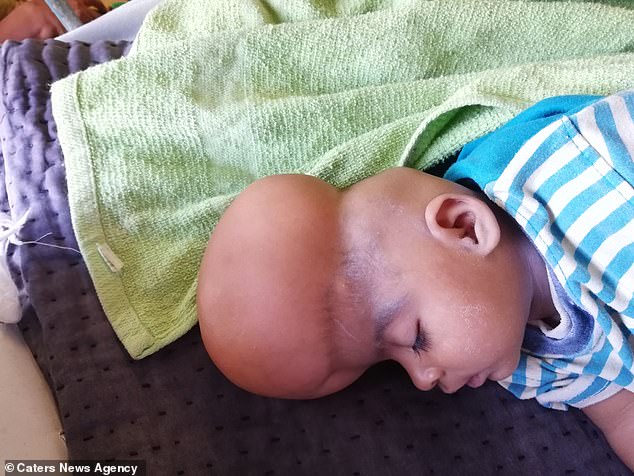 The youngster is being monitored in hospital, where doctors will first treat her spina bifida