Hundreds of activists led by the Tehreek-e-Labbaik party took to the streets of Karachi on Friday where their march quickly turned violent, with officers firing tear gas to disperse the crowd.

Dozens of activists also gathered in the capital Islamabad, despite the fact that Mrs Bibi’s lawyer earlier suggested she had already left the country for Canada.

Hard-line Islamist protesters clashed with police in Karachi, Pakistan, on Friday as they demanded that Asia Bibi be returned to death row for blasphemy after she was acquitted 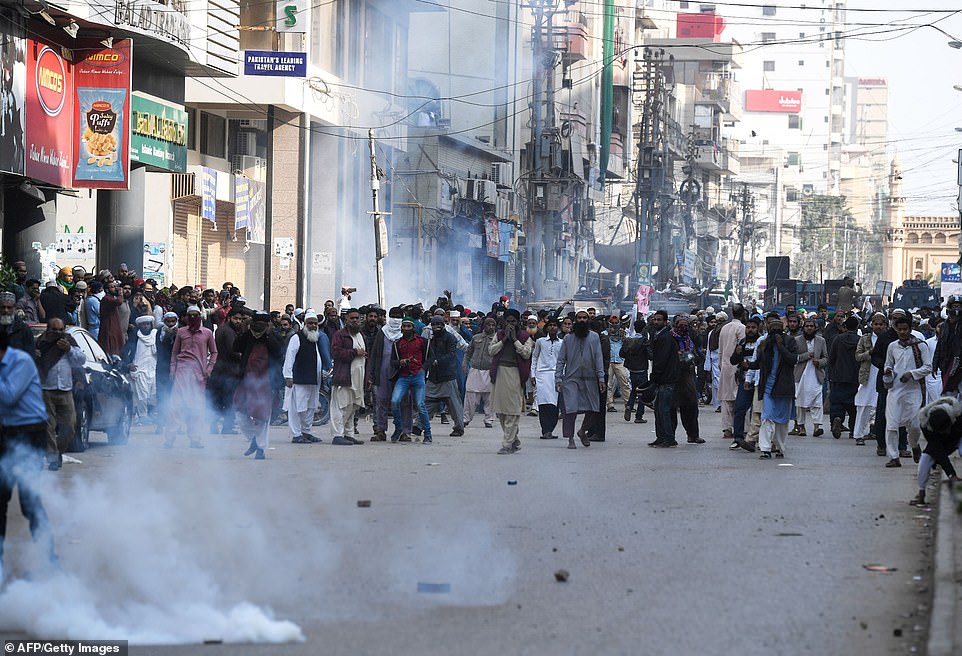 The protesters, led by radical the Tehreek-e-Labbaik party, threw bricks at police who fired tear gas back 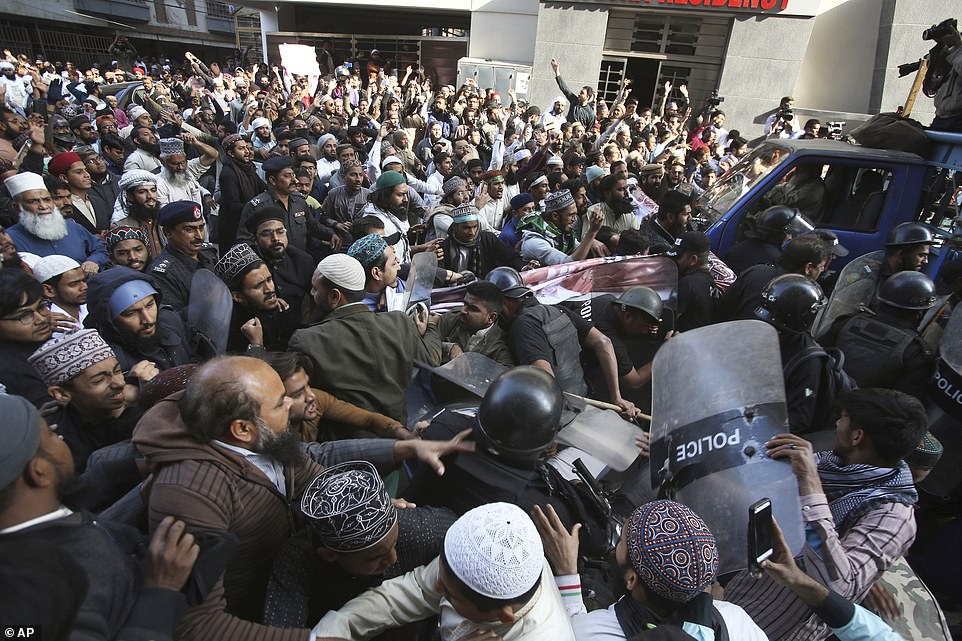 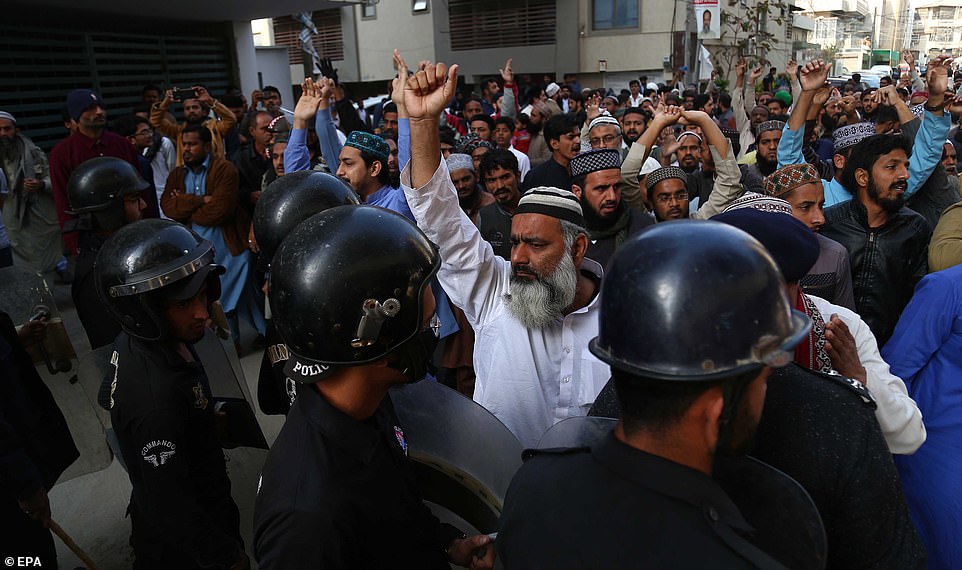 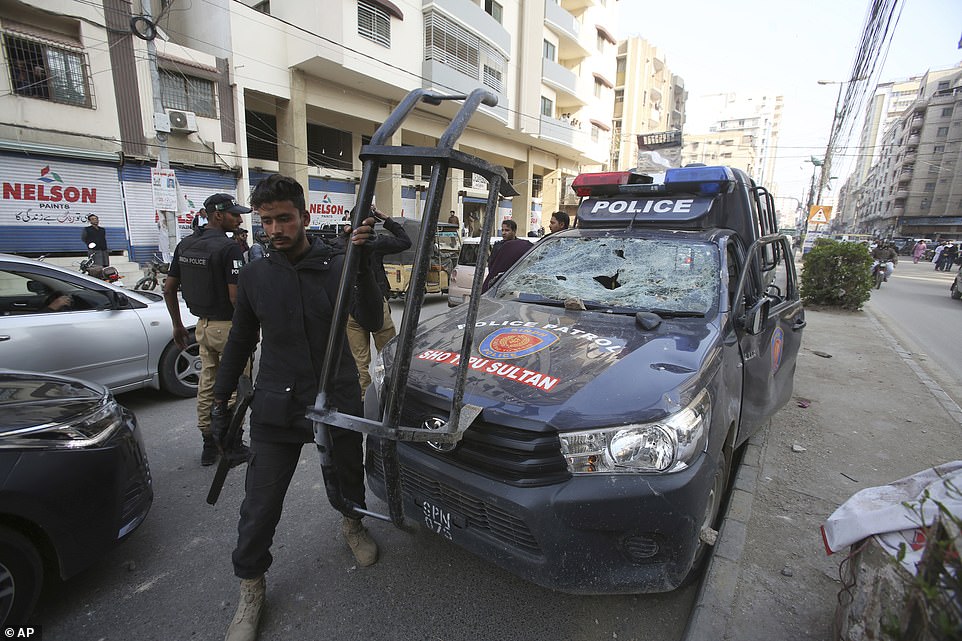 Police vehicles were smashed up by the demonstrators, despite rumours that Mrs Bibi has already left the country

Saif-ul-Malook told German newspaper Frankfurter Allgemeine Zeitung that Mrs Bibi was ‘united with her family’ on Friday. Her two daughters are already understood to be living in Canada.

The newspaper was unable to confirm exactly how Mrs Bibi reached Canada amid fears for her safety, and sources later alleged that she was still in Pakistan.

Despite the clashes in Karachi, nationwide marches that Tehreek-e-Labbaik had called for failed to materialise, largely because hundreds of their supporters were rounded up weeks ago to head off any trouble.

The protests were sparked after the country’s Supreme Court said this week that it would no revisit its decision in October last year to acquit Mrs Bibi of blasphemy for insulting the Prophet Mohammed. 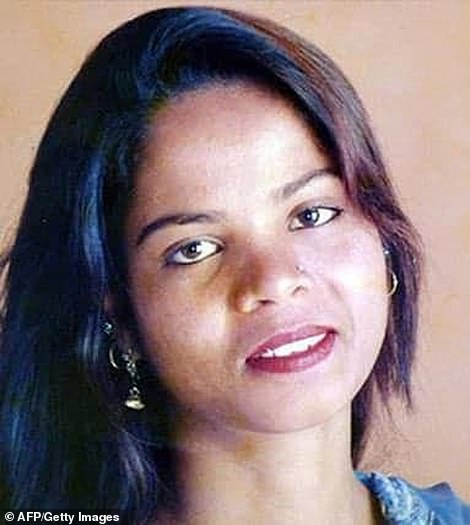 Saif-ul-Malook, Mrs Bibi’s lawyer, told the German press that she was ‘united with her family’ who live in Canada, but later walked back on those claims

Insiders spoke earlier this week about a ‘secret operation’ to spirit her out of the country before extremists could target her.

A source close to Mrs Bibi told the Mail: ‘The fact is, she is not safe until she gets out of Pakistan.

‘There is huge corruption there, within the government, within the military, and there are powerful people who want her dead. She does not know who to trust.’

The 53-year-old Christian woman had been in protective custody under military guard since and the government refused to reveal her whereabouts for fear of her being targeted by vigilante death squads.

To quell violent demonstrations in Pakistan, Imran Khan, the prime minister and former cricketer and London playboy, had promised hardline mullahs that Mrs Bibi would not be allowed to leave the country until there was a review of the case by the Supreme Court.

Mrs Bibi’s ordeal began on a hot day in 2009 when she brought water to fellow farmhands who refused to drink from the same container as a Christian woman.

Two of her fellow farm workers argued with Bibi and later accused her of insulting Islam’s prophet.

The judges who ruled in her favour have bravely risked their lives to uphold Mrs Bibi’s aquittal.

Mrs Bibi’s case has already seen senior officials murdered for supporting her. In 2011, the Governor of Punjab, Salmaan Taseer, was gunned down by his own bodyguard.

Two months later, Shahbaz Bhatti, Pakistan’s minister for minorities, paid for his outspoken support for Mrs Bibi by dying in a hail of bullets as he drove through Islamabad.

Dismissing the petition by extremist leaders to overturn the Bibi verdict and send her back to prison for execution, Pakistan’s Chief Justice Asif Saeed Khan Khosa, who led the panel of judges, said: ‘The image of Islam we are showing to the world gives me much grief and sorrow.’ 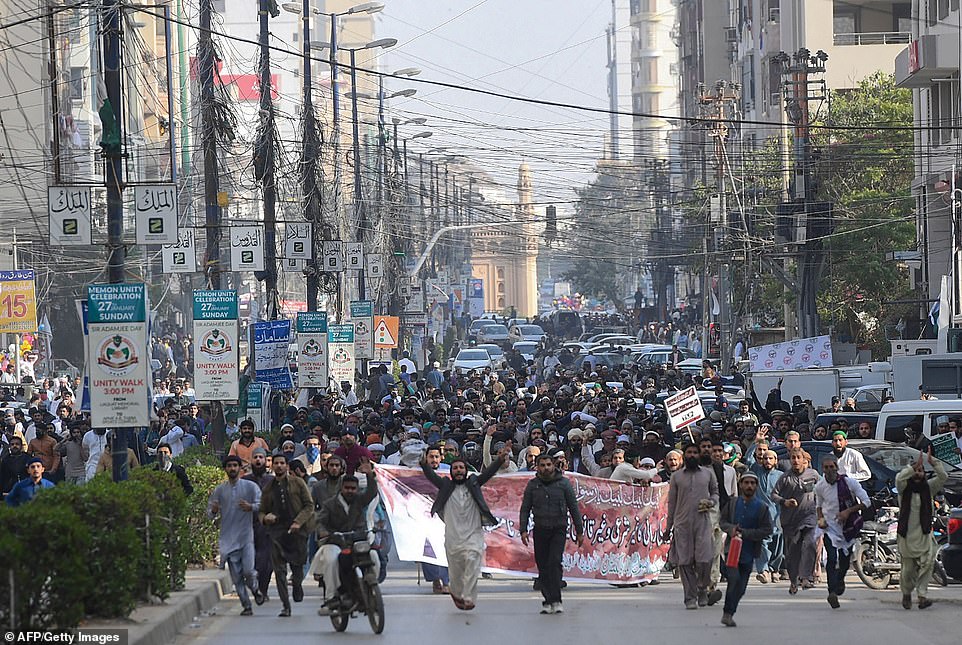 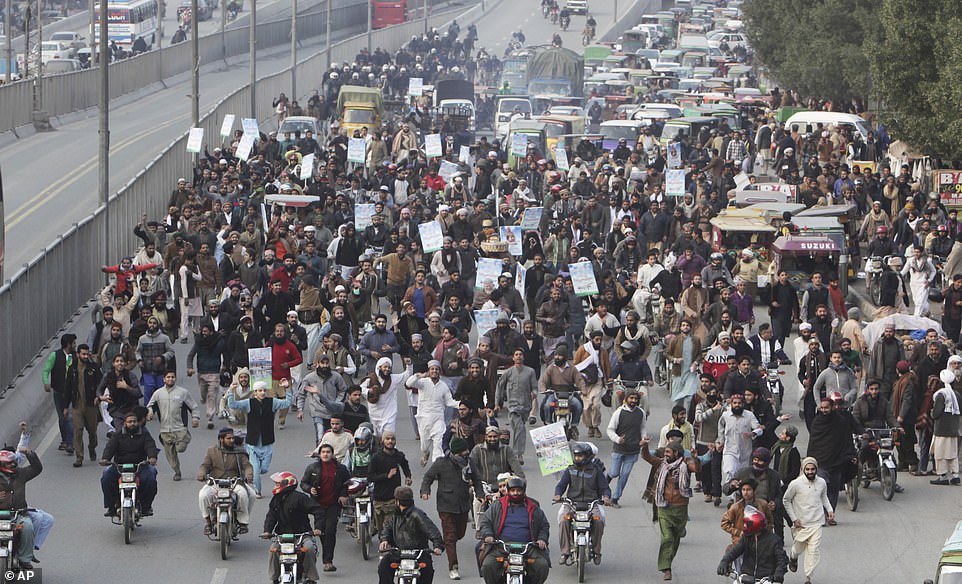 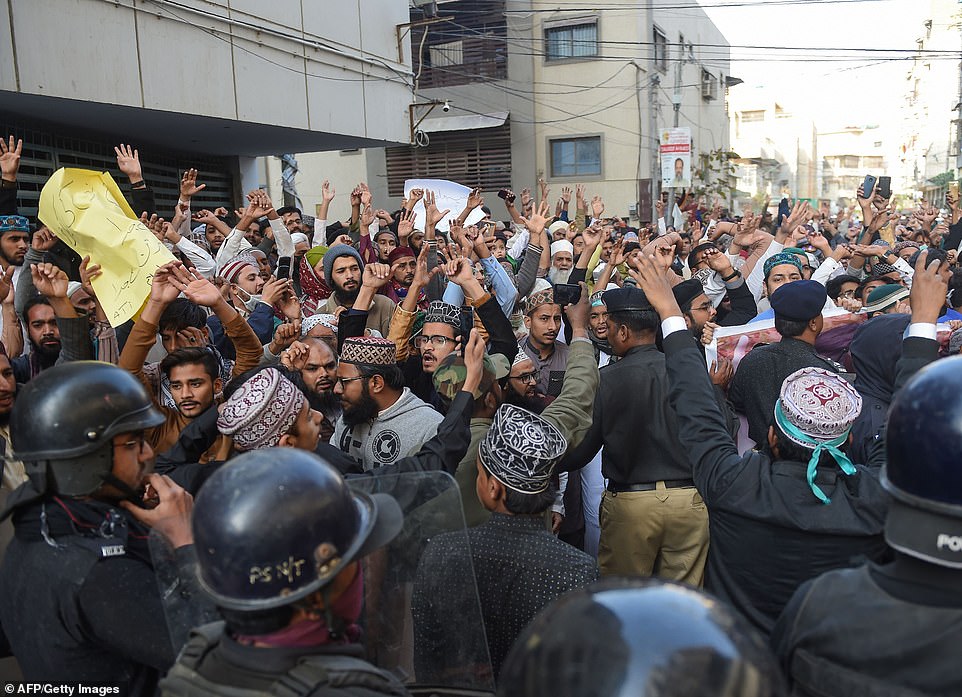 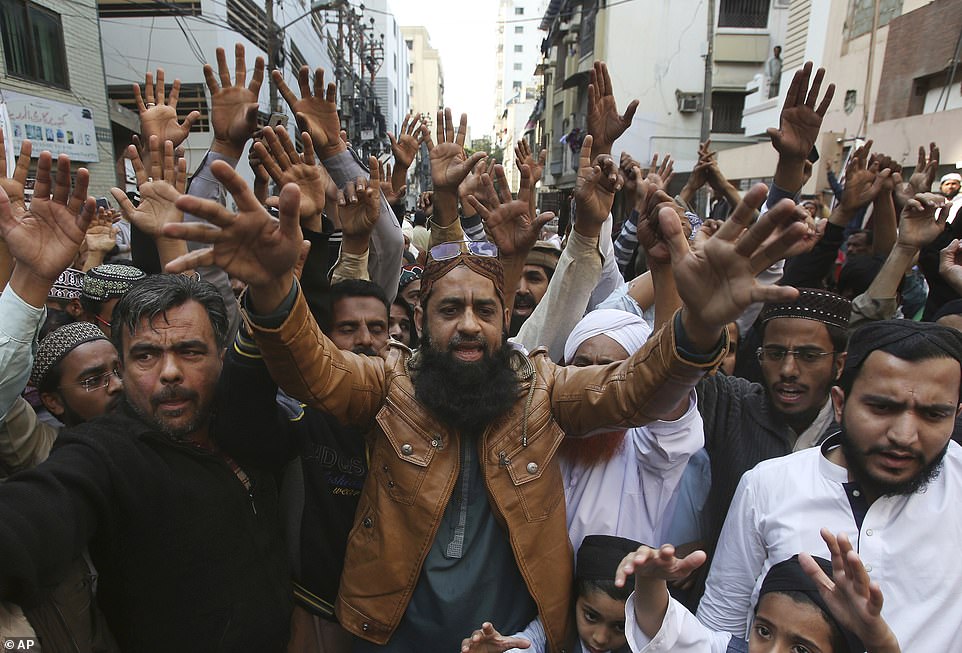 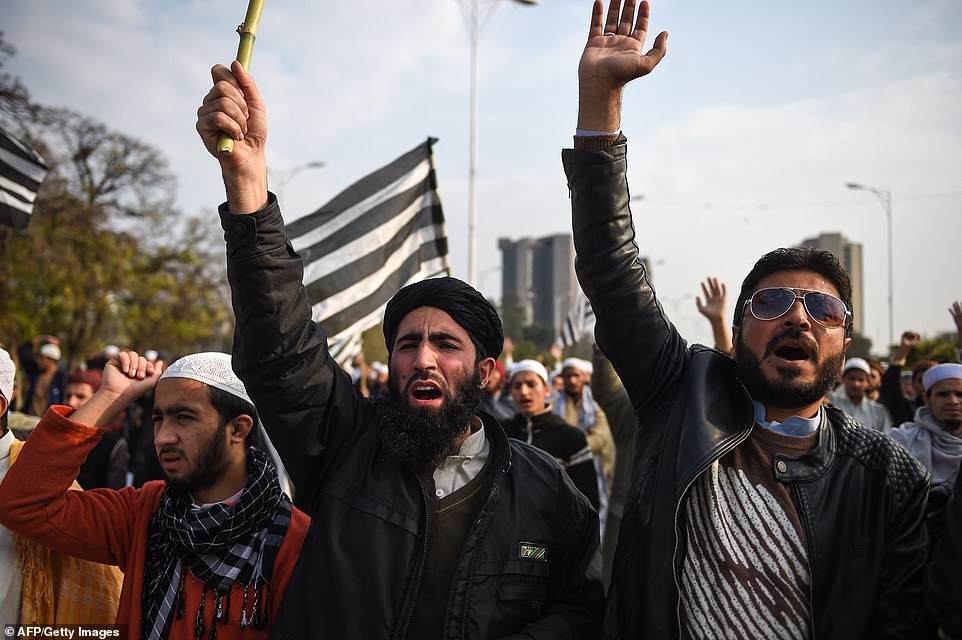 Demonstrators also gathered in the capital of Islamabad, but nationwide marches failed to materialise after hundreds of religious hard-liners were arrested to prevent trouble

Amnesty International said Mrs Bibi should be free ‘to reunite with her family and seek safety in a country of her choice’.

Zoe Smith of Open Doors, which campaigns against Christian persecution around the world, said: ‘We are overjoyed that justice has prevailed and are praying that this heralds a new era of equal rights for Christians and other religious minorities in Pakistan.’

She added: ‘Asia and her family’s safety remains of paramount importance. Many Christians will still be praying for their safety.’

Although no protesters had yet gathered, a heavy contingent of police could be seen today at a junction connecting Islamabad with neighbouring Rawalpindi, where an anti-blasphemy sit-in in 2017 paralysed the capital for weeks.

Calls for demonstrations came hours after the Supreme Court upheld its earlier decision to acquit Bibi in a case which drew worldwide attention to religious extremism in Pakistan.

Mrs Bibi, a labourer from central Punjab province, will be reunited with her two daughters, Eisham and Esha, who earlier fled to Canada where they were granted asylum.

‘Is this the face of Islam that we want to show to the world?’ Chief Justice Asif Saeed Khosa asked a packed courtroom in Islamabad as he delivered the decision, expressing frustration at the furious reaction by an extremist minority.

Blasphemy remains a massively inflammatory issue in Pakistan, where even unproven accusations of insulting Islam can spark lynchings.

Minorities – particularly Christians – are often caught in the crossfire, while mere calls to reform the colonial-era laws against blasphemy have also provoked violence. 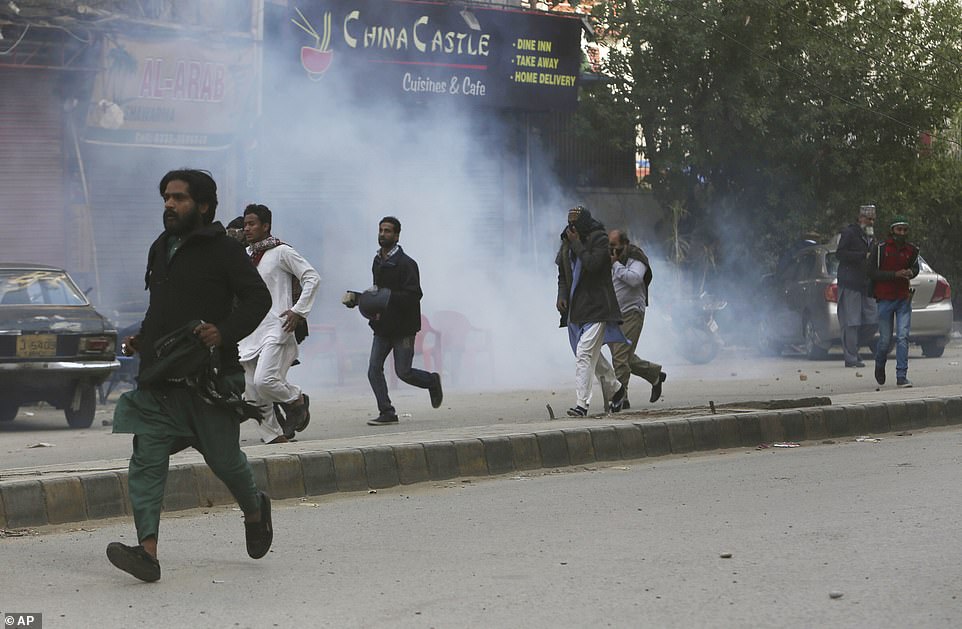 Tear gas canisters explode as protesters run for cover in Karachi, amid violence between police and demonstrators 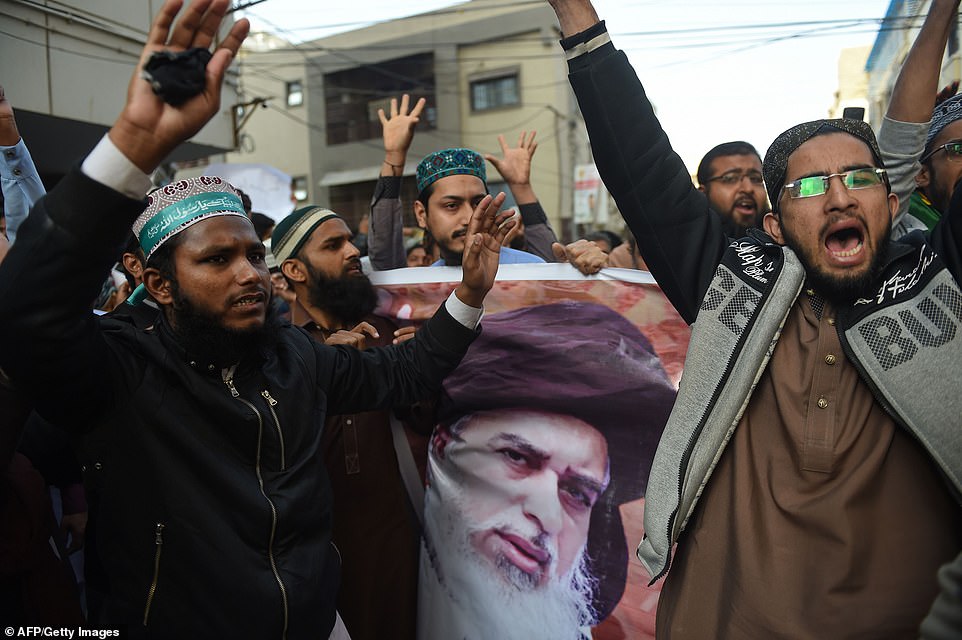 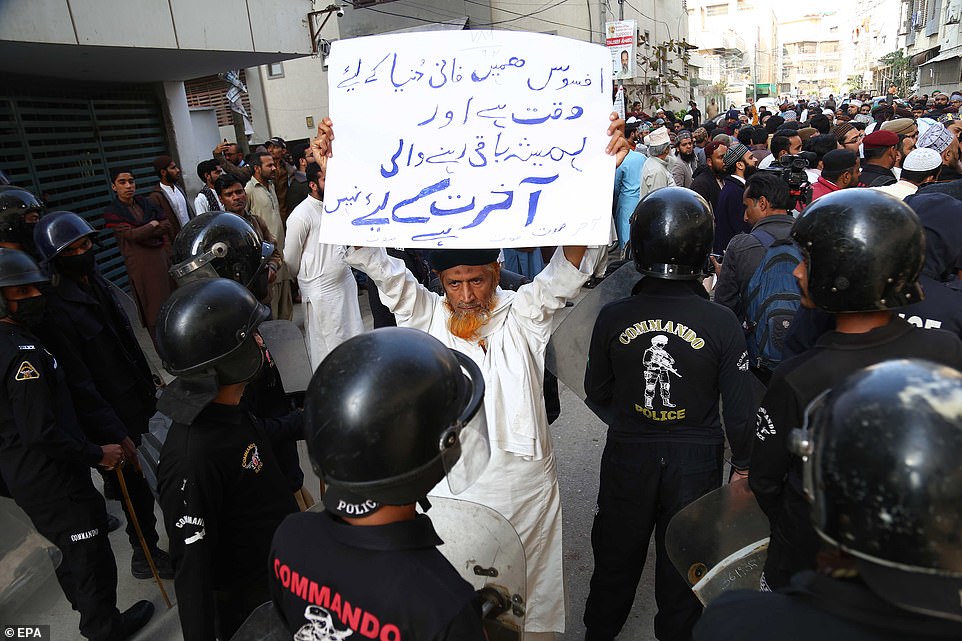 Supporters of Islamic political party Tehrik-e-Labaik Pakistan, hold a placard reading in Urdu ‘Its sad that we have time for this material world but not for hereafter’

A friend quoted Mrs Bibi last night as saying: ‘I am really gratefully to everybody, now after nine years it is confirmed that I am free and I will be going to hug my daughters.’

A source close to Mrs Bibi said: ‘She is not safe until she gets out. There are powerful people who want her dead’.

The ruling has infuriated Islamist protesters who say the 53-year-old ‘should be murdered’ for her crimes.

They have warned the mother she won’t be able to escape, as there are ‘Muslims everywhere who want to kill her’.

The Tehreek-e-Labaik Pakistan (TLP) party, which led violent protests demanding Bibi’s execution after her acquittal, called for its members to be ready for action in a message sent to journalists.

But most of its leaders remain in detention after a government crackdown, and few protesters could be seen at the court in Islamabad, where security appeared as normal.

That did not prevent those who did show up for the hearing from calling for violence against mother-of-two Bibi, however.

Bibi, a Roman Catholic from Punjab province, was sentenced to death in 2010 in what swiftly became Pakistan’s most infamous blasphemy case.

Blasphemy remains a massively inflammatory issue in Pakistan, where even unproven accusations of insulting Islam can spark lynchings. 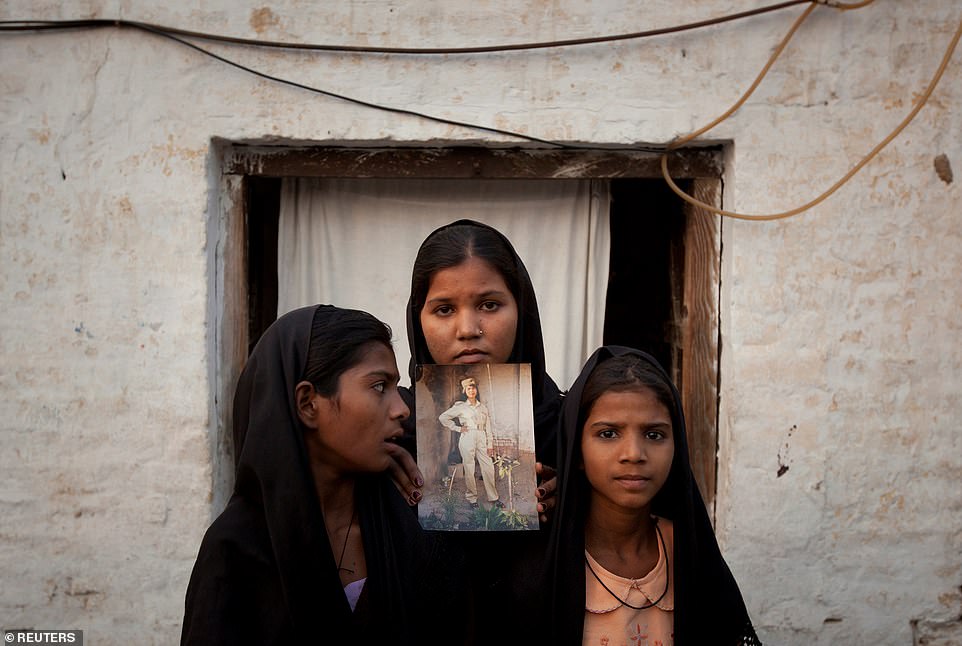 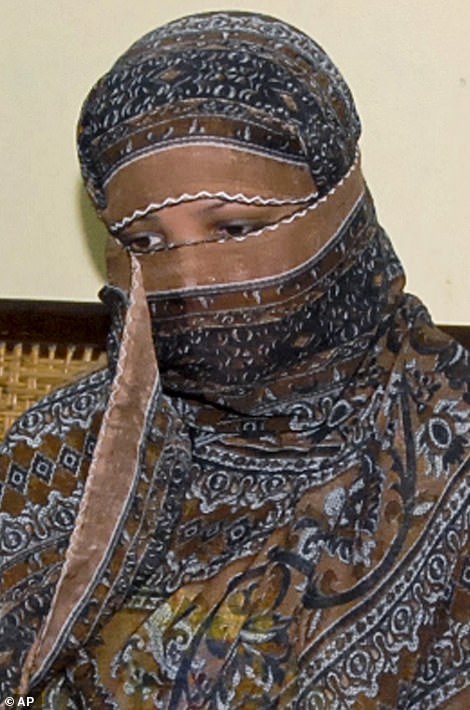 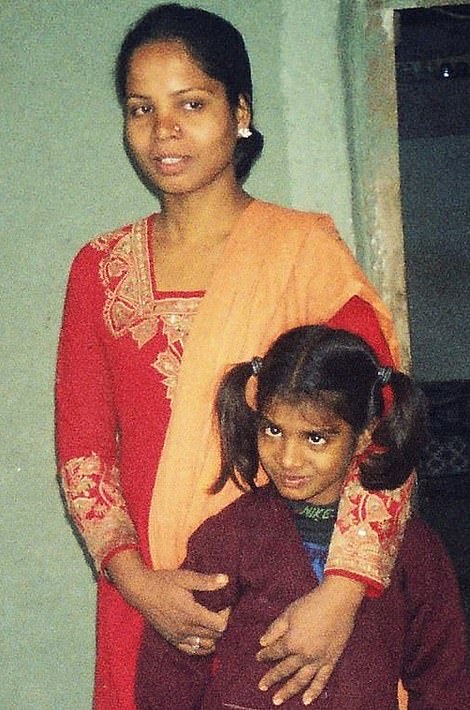 The mother-of-two (pictured) was harvesting fruit with a group of Muslim women when a row broke out over a bucket of water. The women said that because she had used a cup they could no longer touch it, because her faith had made it unclean and a row over religion ensued

Minorities – particularly Christians – are often caught in the crossfire.

The allegations against Bibi date back to 2009, when Muslim women accused her of blasphemy against the Prophet Mohammed, a charge punishable by death under Pakistan law.

The mother-of-two was harvesting fruit with a group of Muslim women when a row broke out over a bucket of water.

The women said that because she had used a cup they could no longer touch it, because her faith had made it unclean.

Prosecutors alleged that in the ensuing row the women said Mrs Bibi should convert to Islam.

It was claimed she made offensive comments about the Prophet in response.

At her home she was given a beating, during which her accusers say she confessed to blasphemy. Police arrested her and she was sentenced to death.

Bibi has denied the charges, and her prosecution rallied international rights groups, politicians and religious figures.

Pope Benedict XVI called for her release in 2010, while in 2015 her daughter met his successor Pope Francis.