A furious Pakistani mob burned an effigy of Donald Trump during a rally against the US a week after he slammed Islamabad for harbouring terrorists.

Pictures have emerged of the figure depicting the President engulfed in flames as the cheering crowd hoist Pakistani flags in the air.

Other demonstrators punched the air and held up placards reading, ‘US President Donald Trump (is) stupid.’

People burn an effigy of US President Donald Trump during a rally against the US, near the Afghan border in Chaman, Pakistan 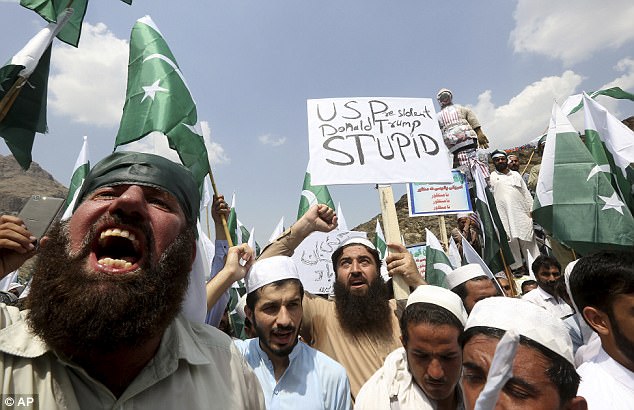 A Pakistani man shouts anti-American slogans and another holds up a placard reading, ‘US President Donald Trump (is) stupid,’ during a rally in Torkham, a border town along the Afghanistan border 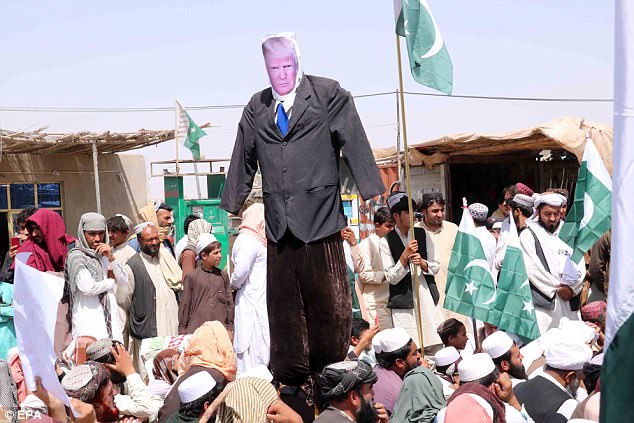 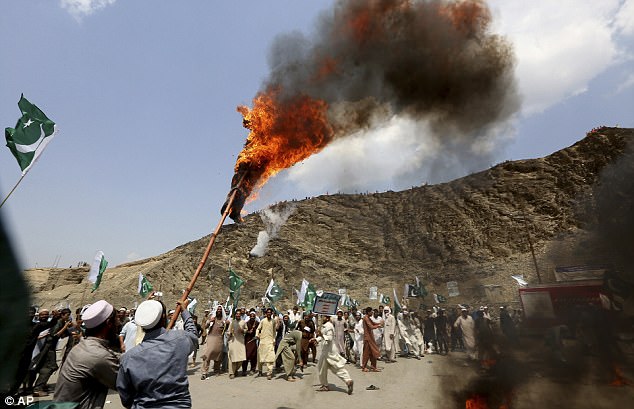 Pakistan has already postponed a visit by a US diplomat who had been due to arrive Monday, a week after President Donald Trump publicly upbraided Islamabad for harbouring militants attacking US and Afghan troops.

The delegation led by Assistant Secretary of State for South Asia Alice Wells was set to be the first major visit by an American official since the president’s comments.

‘At the request of the Gov’t of Pakistan, the visit of the US delegation has been postponed until a mutually convenient time,’ the foreign ministry said late Sunday.

In a major speech outlining US policy on Afghanistan Trump slammed Pakistan for offering safe havens to ‘agents of chaos’ and suggested relations would be adjusted immediately. He offered few details.

Successive US administrations have criticised Pakistan for maintaining links with the Taliban and harbouring leading jihadists – like Osama bin Laden. 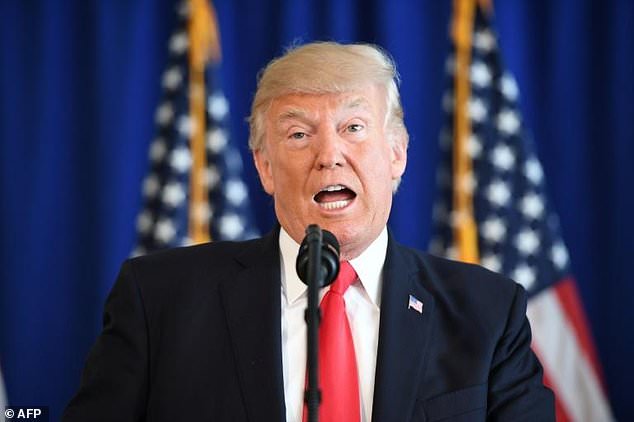 Following Trump’s remarks, Secretary of State Rex Tillerson also cautioned that Pakistan could lose its status as a major US ally and see its US military aid suspended.

Islamabad has repeatedly denied claims of being soft on militancy, accusing its ally of ignoring the thousands who have been killed in Pakistan and the billions spent fighting extremists.