Imtiaz Dharker has written about themes including religion, identity, culture and feminism

Imtiaz Dharker, who has written about themes including religion, identity, culture and feminism, would be the first Asian person and second woman to become poet laureate in the position’s 350-year-long history.

It is understood that Dharker, 65, was chosen by the government after culture secretary Jeremy Wright introduced a 15-person committee of poetry experts to help select the next laureate before Duffy’s ten-year term ends on April 30, the Sunday Times reported.

Dharker, who was born in Lahore, Pakistan, and grew up in Glasgow, appeared on Desert Island Discs in 2015 where she told Kirsty Young: ‘I am a Pakistani-Scottish Calvinist Muslim, adopted by India and married into Wales … Don’t try to put me in a box … I’m a cultural mongrel.’

The culture department said that an appointment has not yet been confirmed.

The final decision will be taken by The Queen.

Dharker’s mixed heritage and roaming lifestyle is a central theme in her work.

In her poem They’ll Say ‘She Must Be From Another Country’, she writes: ‘Maybe there is a country / where all of us live / all of us freaks / who aren’t able to give /our loyalty to fat old fools…

‘Puff out their chests…

‘Put their feet on our necks…

‘And break their own rules.’ 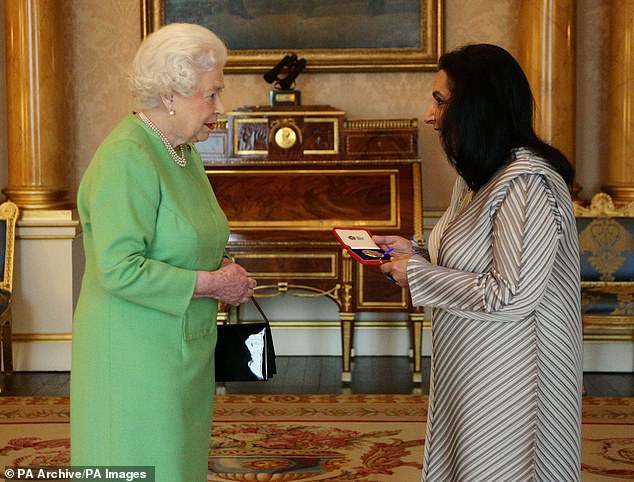 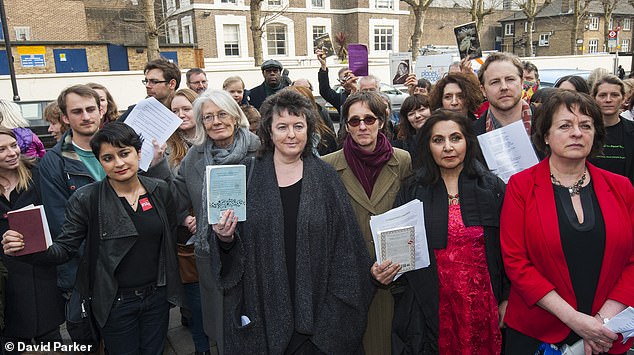 Dharker was awarded the Queen’s Gold Medal for Poetry in 2014, and is a former poet-inresidence at Cambridge University Library.

Her first collection, Purdah, published in 1989, was titled after the Muslim and Hindu practice of keeping men and women separate.

Commenting on her work, Dharker had written: ‘The image of purdah for me was on the dangerous edge of being almost seductive: the hidden body, the highlighted eyes, the suggestion of forbidden places.

‘But of course it is also one of the instruments of power used to bring women to heel in the name of religion.’

Her following works include Postcards from God, I speak for the Devil, The Terrorist at my Table, Leaving Fingerprints and Over the Moon.

Dharker’s work appears in GCSE and A-level syllabuses, and she speaks to more than 25,000 students a year in poetry recitals across the country.

While giving one talk, she explained the origin of her poem Tissue. She noticed her father had written her date of birth on the tissue paper on the back of a book. 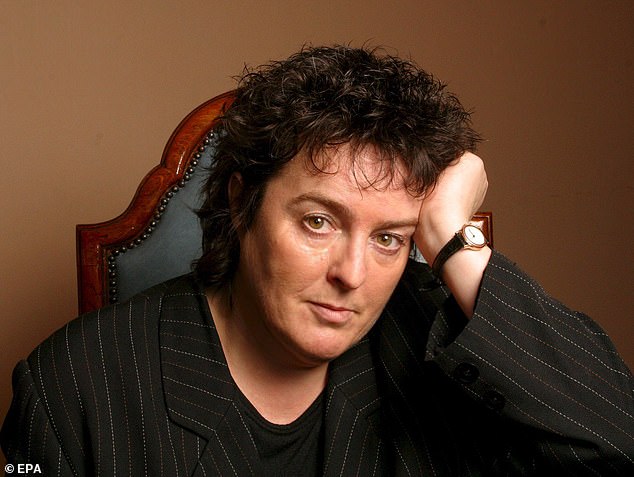 ‘Looking at it, I felt a connection to him, that we had lost for years,’ she said.

‘And in this poem I wrote, I was really trying to think about what matters, what’s worth writing in books, birth, death, family, relationships, and how the scraps of paper that we throw away are the things that tell the real story of our lives.

‘And also how something as fragile as tissue, tissue paper, human skin, can be more precious than all the things we build to try and make ourselves feel safe and secure, the temples and churches and mosques, and the monuments.’

Dharker was elected a Fellow of the Royal Society of Literature in 2011.

Victoria and Elizabeth, Ada and Phyllis

swoop in from the ends of the city to marvel

at the newly unearthed find. The tunnel

has seen it all before. It yawns, and at its open mouth

it has just spoken, a speech balloon

that blossoms out of darkness.

Extract from Waiting for Crossrail by Imtiaz Dharker

There have been recent calls from poets for the new laureate reflect multicultural Britain.

Poet Daljit Nagra, the son of Indian immigrants who uses a colourful mix of Punjabi and English – or Punglish – was reported to have been a contender for the role, along with Lemn Sissay, who sold his first poetry to Lancashire miners on strike.

While growing up in Scotland, Dharker’s Pakistani parents banned her from going out and dancing in the evenings, instead pushing her towards focusing on education.

‘I spent a lot of my time looking out over the city and the shining lights, and feeling as if all of life was happening somewhere else, somewhere out there, somewhere where I was not,’ she said.

She fell in love with an older man on the faculty of her university while studying, and the couple married and ran away to India shortly after Dharker’s final exams, never to see her mother again.

But following her divorce she would reconcile with her father and siblings, but Dharker said it is still ‘too painful’ to talk about it with them.

Her second husband, Welshman Simon Powell, founded Poetry Live before his death in 2009 following a struggle with cancer.

Her daughter Ayesha, 42, appeared on Coronation Street from 2008-9 as Tara Mandal.

Carol Ann Duffy, who was the first woman, first Scot and first openly gay or bisexual poet to hold the laureate position, has praised Dharker.

She said: ‘Reading her, one feels that were there to be a world laureate, Imtiaz Dharker would be the only candidate.’ 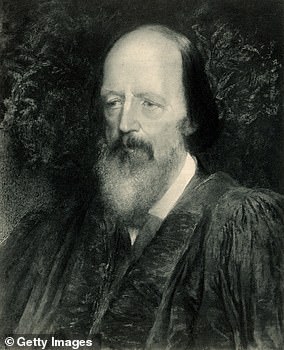 Tennyson was born in in August 1809, in Somersby, Lincolnshire, where his alcoholic father was rector.

His parents separated when he was a teenager and he grew up fearful of mental illness and worried about money.

He was extremely short-sighted and needed a monocle to be able to see to eat.

The mixed reception of his 1832 poems hurt him deeply but the success of two volumes published in 1842 changed his fortunes.

In 1845 he received a Civil List pension, which enabled him to marry.

With the success of The Princess and In Memoriam he became the most popular poet of the Victorian period.

Prince Albert, the husband of Queen Victoria, greatly admired his work, and Tennyson later dedicated The Idylls Of The King to Albert’s memory.

At Queen Victoria’s insistence, he accepted a peerage, which he had previously turned down when it was offered by both Gladstone and Disraeli.

The Charge Of The Light Brigade was written in 1854, only minutes after Tennyson had read a newspaper account of the battle which contained the line ‘Someone had blundered’ – which he then incorporated into what became the most famous poem about war until World War I. 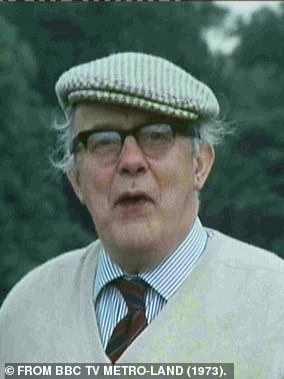 Sir John Betjeman was born in London on August 28, 1906, was one of Britain’s most popular poet laureates as well as a much-loved figure on British television.

Much of his work satirised the promoters of what he saw as destructive ‘progress’ and he devoted much of his time to defending Victorian architecture.

He published his first collection of poetry and first book on architecture, Ghastly Good Taste, in 1933.

Betjeman wrote four more volumes of poetry before the publication of hisCollected Poems in 1958.

His celebration of Britain’s heritage proved popular with a British public which had recently been through the upheaval of the Second World War and the austerity it imposed.

He was knighted in 1969 and succeeded Cecil Day-Lewis as poet laureate in 1972. 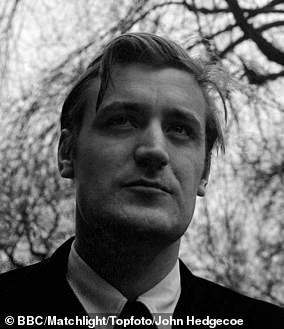 Ted Hughes, born in August 1930 in the village of Mytholmroyd in the West Riding of Yorkshire, was regarded as one of the best poets of his generation.

Also a celebrated writer, Hughes published numerous works of fiction and poetry collections, including best-selling volumes such as Lupercal (1960), Crow (1970), Selected Poems 1957-81 (1982) and The Birthday Letters (1998).

He also wrote the much-loved children’s book The Iron Man (1968),  about the arrival of a giant ‘metal man’ of unknown origin who befriends a small boy and defends the world from a dragon from outer space. It was later used as the basis for animated 1999 film The Iron Giant.

Hughes was married to American poet and author Sylvia Plath from 1956 until her death from suicide in 1963.