Nasir Jamshed, 33, has confessed to conspiring to bribe players to spot-fix cricket matches

An international cricketer has confessed to plotting to rig Twenty20 matches by bribing fellow batsmen to deliberately score no runs.

Nasir Jamshed, 33, represented Pakistan in more than 60 matches but now faces jail for his part in scheming to spot-fix matches.

The disgraced left-handed slogger from Walsall, West Midlands, had been on trial at Manchester Crown Court but on Monday backtracked on his previous denial and admitted conspiracy to commit bribery.

His British accomplices Yousef Anwar, 36, from Slough – described as the ringleader – and Mohammed Ijaz, 34, from Sheffield, had already pleaded guilty prior to the trial.

The cricketing crooks, who will be sentenced in February, were stung by an undercover police officer posing as a member of a corrupt betting syndicate.

Prosecutor Andrew Thomas QC said this led to the exposing of an attempted fix in the Bangladesh Premier League (BPL) towards the end of 2016 and an actual fix in the Pakistan Super League (PSL) in February 2017.

In both cases, an opening batsman in the Twenty20 tournaments had agreed to not score runs from the first two balls of an over in return for payment.

Jamshed’s spiral into corruption began when he was the target of bribery in the Bangladesh ‘two dot ball’ plan.

He then turned perpetrator as a go-between who encouraged other players to spot-fix at a PSL fixture between Islamabad United and Peshawar Zalmi in Dubai on February 9. 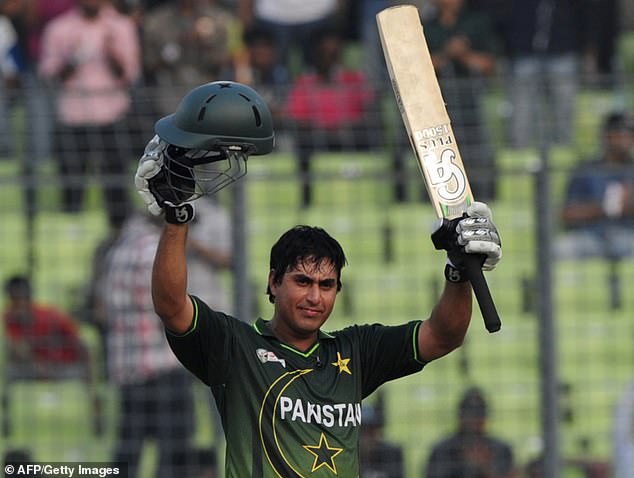 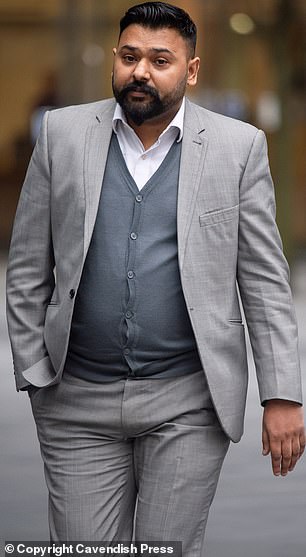 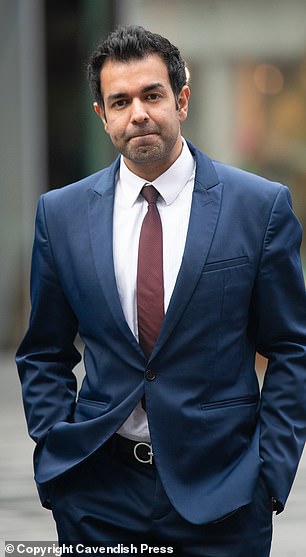 British accomplices Yousef Anwar (right), 36, from Slough – described as the ringleader – and Mohammed Ijaz (left), 34, from Sheffield, had already pleaded guilty prior to a trial

The authorities were tipped off about the agreement and allowed the game to go ahead as opening batsman Sharjeel Khan purposely scored no runs off the first two balls of the second over.

A fall from grace: The career of Nasir Jamshed

Jamshed made his first-class debut at the age of just 15 and was soon selected to the Pakistan Under-19 cricket team for a series against Sri Lanka, making 204 in the second innings on his debut.

At Twenty20 level, he made his debut for the Lahore Lions in April 2005, at the age of 15 years and 140 days, making him the then youngest ever player to play in Twenty20 matches.

Jamshed memorably scored a century in the Pakistan-India grudge match in 2012.

Mr Thomas told the jury the case arose out of an investigation by the National Crime Agency and that the undercover operative was introduced to Anwar, who was suspected of involvement in bribery and match-fixing in international cricket.

Their first meeting was at a hotel in Slough in November 2016 where Anwar said he had six players working for him in the BPL.

Anwar freely admitted being involved in spot-fixing for about 10 years, said Mr Thomas, and went on to discuss spot-fix fees with payment split between players and fixers.

At a further meeting at the same hotel, Anwar told the officer the names of his players including Jamshed and fellow opening batsman Sharjeel Khan, who both played for the Rangpur Riders.

Jamshed later went on to agree to undertake a two dot ball fix in a match against Dhaka Dynamites, the court heard, but it was called off when the batsman did not give all the pre-arranged signals – which included the use of certain coloured batting grips.

Another match on December 3 against Barisal Bulls was identified but Jamshed did not play as he was dropped from the team as the BPL season ended. 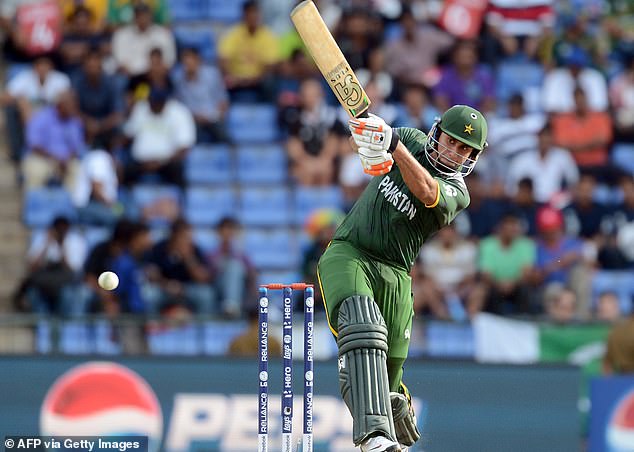 The disgraced left-handed slogger from Walsall, West Midlands, (pictured during the ICC Twenty20 Cricket World Cup match against New Zealand in 2012) had been on trial at Manchester Crown Court but on Monday admitted conspiracy to commit bribery

In January 2017, Anwar met up with the undercover officer and Jamshed at a restaurant in Birmingham, the court was told, where Khan and a team-mate, Khalid Latif, were lined up for the next fix in the PSL.

Messages were sent between Anwar and Jamshed immediately before and after the fix took place, which included discussions about payment, the court heard.

Players including Khan were challenged by the authorities after the game and statements were taken and mobile phones were seized, Mr Thomas said.

When Latif’s bag was searched, a number of coloured grips – brought from the UK to Dubai by Anwar – were found, the prosecutor added.

Jamshed, Anwar and Ijaz will be sentenced in February.