Palestinian terror group Hamas THANKS Jeremy Corbyn for his support

The Palestinian terror group Hamas has officially thanked Jeremy Corbyn for his support, MailOnline can reveal.

In a carefully worded statement issued this evening, the militant organisation, whose armed wing is responsible for the deaths of thousands of civilians, ‘saluted’ the Labour leader after he sent a message to a major anti-Israel rally in London last weekend.

‘We have received with great respect and appreciation the solidarity message sent by the British Labor (sic) Party Leader, Jeremy Corbyn, to the participants in the mass rally that took place in central London,’ the statement said.

‘We also salute Mr. Jeremy Corbyn for his principled position in rejecting the so-called Trump Plan for the Middle East.’ 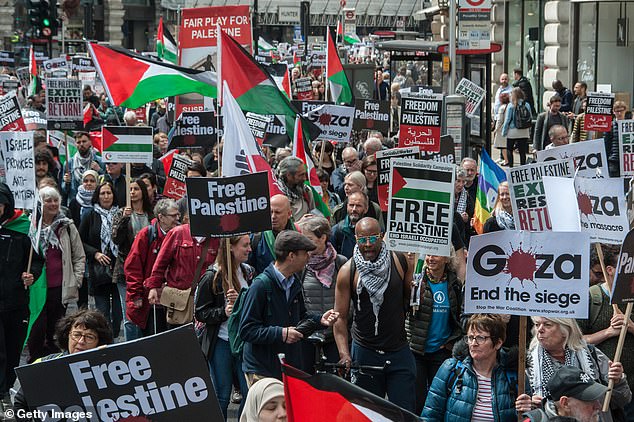 The Labour leader sent a support message to a protest organised by the Stop the War Coalition and Palestine Solidarity Campaign in support of the Palestinian people on May 11, which was attended by thousands (pictured)

Mr Corbyn and the terror group have a long and warm history, exemplified in him referring to the group as ‘friends’ on camera in 2009.

The Labour leader later said he regretted his choice of language. But he has visited Hamas leaders many times in the past, and invited senior members of the group to Parliament in 2015, the year he was elected leader.

Mr Corbyn’s message of support was read out to a huge crowd in central London at a rally that was slammed by anti-racist campaigners as anti-Semitic.

According to the Campaign Against Anti-Semitism, the march saw ‘open anti-Semitism from attendees’, with one speaker telling the crowd that Jewish organisations are ‘in the gutter’ and ‘part of the problem’.

Members of the National Front and the Muslim Brotherhood were reportedly in attendance. 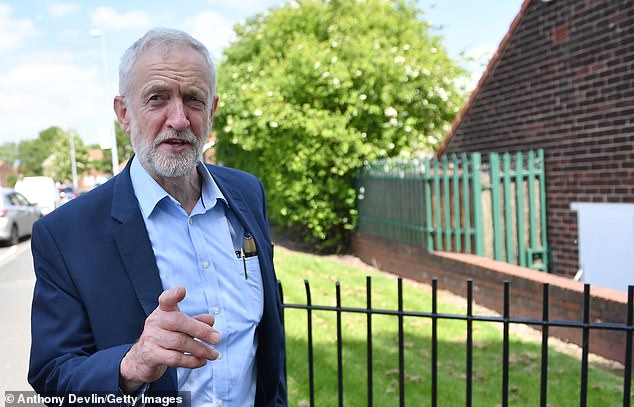 Mr Corbyn has nurtured links with many extremists and terrorists in the past, including Hamas and Hezbollah

A statement from Mr Corbyn was read out by the Shadow Home Secretary Diane Abbott to wild cheering from the marchers.

The rally was organised by the Palestine Solidarity Campaign, of which Mr Corbyn is chairman.

Richard Burgon MP, Shadow Secretary of State for Justice – who gave a speech saying ‘Zionism is the enemy of peace’ and vehemently denied having done so until video evidence emerged – also addressed the crowd.

Gideon Falter, chairman of the Campaign Against Anti-Semitism, said: ‘Only one leader of a British political party could expect to be “saluted” by Hamas, the a genocidal anti-Semitic terrorist organisation.

‘Clearly Hamas feels that when it comes to Jews, Jeremy Corbyn is a brother in arms. Who could say that they are wrong after this weekend’s chilling anti-Semitic rally?

‘It was so filled with Jew-hatred that both the National Front and the Muslim Brotherhood came along to support it.’ 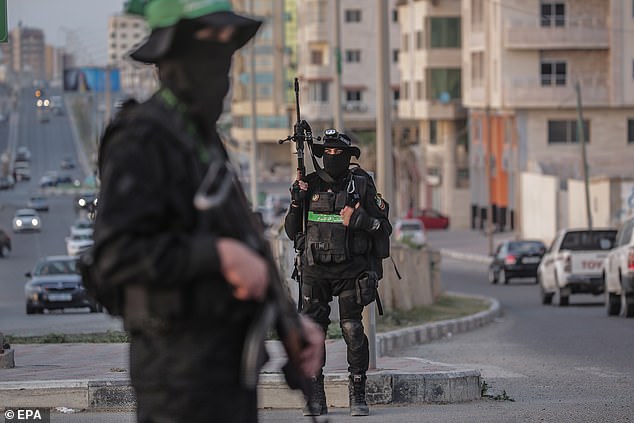 Mr Corbyn has nurtured links with many extremists and terrorists in the past, including Hamas and Hezbollah, convicted IRA members, Gerry Adams, President Assad of Syria, as well as President Maduro of Venezuela.

In 2014, he attended a ‘peace conference’ in Tunisia with many Hamas leaders, where he laid a wreath near the graves of Palestinian terrorists responsible for the massacre of Jewish athletes at the 1972 Olympics in Munich.

Officials from the Lebanese group Hezbollah, classified by the US government as a terror organisation and which has called for the destruction of Israel, were invited by Mr Corbyn to a meeting in 2009. He said: ‘It will be my pleasure and honour to host an event in Parliament where our friends from Hezbollah will be speaking.’

It comes as a petition entitled ‘Jeremy Corbyn is an anti-Semite and is unfit to hold any public office’ reached 55,000 signatures.

‘We have received with great respect and appreciation the solidarity message sent by the British Labor Party Leader, Jeremy Corbyn, to the participants in the mass rally that took place in central London last Saturday in commemoration of the 71st anniversary of Nakba.

‘In his message, Mr. Jeremy Corbyn condemned the Israeli occupation forces’ shooting at unarmed Palestinian demonstrators in Gaza who were calling for their rights to be recognized. He stressed that peace cannot be achieved with the continued illegal occupation of the Palestinian territories.

‘This message expresses support and solidarity with the Palestinian people and their inalienable rights to freedom, independence and self-determination. It also condemns the ongoing occupation and its crimes against our people, and reflects an advanced moral and political position worthy of all praise and thanks.

‘We also salute Mr. Jeremy Corbyn for his principled position in rejecting the so-called Trump Plan for the Middle East or the “Deal of the Century” if it was based on erasing Palestinian rights, primarily the right to an independent state.

‘On this occasion we emphasize that no peace plan can succeed at the expense of the rights of the Palestinian people, that the Palestinians will not allow this deal to pass, and that it will be doomed to failure.

‘We also call on the current British government to stop supporting the Israeli occupation state and to listen to the voice of wisdom and reason and adopt policies in support of the Palestinian legitimate rights that will lead to stability in this vitally important and highly turbulent region.’