Jeffrey Epstein’s sweetheart plea deal not only helped him avoid federal charges, it also allowed him to see young women at his office in Palm Beach with no law enforcement officials present.

Miami Herald reporter Julie Brown first revealed this in an interview with Alec Baldwin on his podcast Here’s the Thing, explaining that one of the deputies who had been assigned to monitor Epstein during his work release in West Palm Beach confirmed that the high-profile inmate was given free reign once inside his office.

That individual explained that the deputies remained outside and did not enter the office, despite the steady stream of clients, friends and young women who would come to visit the newly-convicted sex offender.

There was a visitor’s log that all guests had to sign according to Brown, but it mysteriously disappeared she was told after requesting the records from law enforcement officials.

Abominable conman: When asked if they ever supervised Jeffrey Epstein in his office or checked on his guests durign work release, a deputy said: ‘No, that was not our job’

Meanwhile, attorney Bradley Edwards revealed on Tuesday during a press conference that he was representing multiple women who were lured to Epstein’s office under false pretenses during his work release, and then forced into sex acts.

None of those victims were said to be minors, but Edwards did note that they were all under the age of 21 at the time of these alleged incidents.

The log’s disappearance also came after donations totaling in the low six-figures were made by Epstein to the Sheriff’s Office over the course of this incarceration.

‘I said, “did you ever pay attention to what he was doing in the office? He had girls in there,”‘ recalled Brown of her conversation with the deputy.

Those deputies were also receiving overtime pay for their work explained Brown, with one deputy required to be outside the office six days a week, for 12 hours each day.

That financial burden was shouldered in some part by the Florida Science Foundation, a company that was run by Epstein.

In the months that Epstein was incarcerated, FSF made donations totaling $128,136 to the PBCSO according to records obtained by Contact 5.

Brown also noted in the interview that Epstein would not have been able to get his sweetheart plea deal if the case was brought today,

‘He was charged with solicitation of prostitution under the age of 18, there really isn’t any such thing as child prostitution,’ said Brown.

She then explained that Epstein and members of his camp stood by the decision not just because it spared him serious jail time and federal charges, but because it was their opinion ‘that these women were prostitutes.’

Brown said that she had never before seen a plea deal similar to the one Epstein was granted by state prosecutors.

‘Florida has some of the toughest ex-offender laws in the country, I mean they send these guys to state prison. Florida state prisons are viscous,’ explained Brown.

‘But he managed to work it out so that he would go to the Palm Beach County Jail, where he had his own private wing.’ 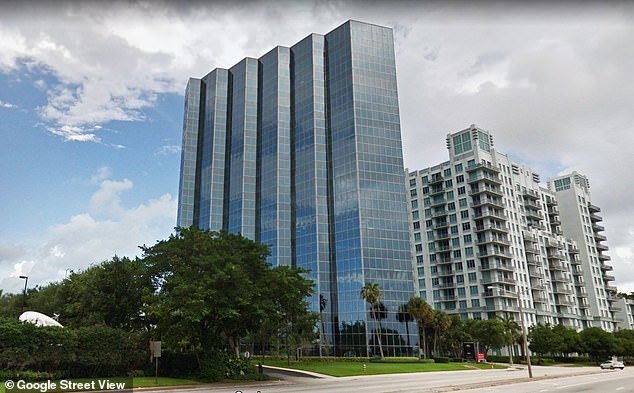 Glass houses: Miami Herald reporter Julie Brown said that a deputy with the Palm Beach County Sheriff’s Office told her they did not monitor Jeffrey Epstein’s office (above) during his work release

Brown’s reporting has certainly resonated with Epstein, according to a court filing submitted on Wednesday.

Federal prosecutors wrote in a letter to the judge that ‘records show that on or about November 30, 2018, or two days after the series in the Miami Herald began, the defendant wired $100,000 from a trust account he controlled to [redacted], an individual named as a potential co-conspirator—and for whom Epstein obtained protection in—the NPA.’

The letter noted that ‘this individual was also named and featured prominently in the Herald series.

That was the lesser if two payments made though according to prosecutors, who stated that  ‘just three days later, on or about December 3, 2018, the defendant wired $250,000 from the same trust account to [redacted], who was also named as a potential co-conspirator—and for whom Epstein also obtained protection in—the NPA.’

That person was ‘also one of the employees identified in the Indictment, which alleges that she and two other identified employees facilitated the defendant’s trafficking of minors by, among other things, contacting victims and scheduling their sexual encounters with the defendant at his residences in Manhattan and Palm Beach, Florida.’

Prosecutors again noted that ‘this individual was also named and featured prominently in the Herald series.’