This is the adorable moment a panda tries to hold onto a swinging ball and tumbles over repeatedly.

The panda appears to be in a zoo in China and desperately tries to hold onto the ball, which is attached to a swinging rope.

It appears to be terrified of the rope the ball is attached to, cringing every time it is touched by it.

The footage, posted on YouTube, starts with the adorable panda reaching up and grabbing the ball.

It tightly holds onto the ball, with its arms wrapped around the toy in a vice-like grip.

The panda is in complete control of the ball, initially, moving into a more comfortable position before becoming curious about the rope.

The footage starts with the panda holding onto the ball, before it loses its grips and tumbles bakcwards

But, hilariously, as it tries to climb up, the panda tumbles backwards in a heavy fall.

It can be seen overbalancing and falling head over heels, with the ball breaking free.

The confused animal crashes onto the floor and appears to be terrified of the rope as it watches it fly up above. 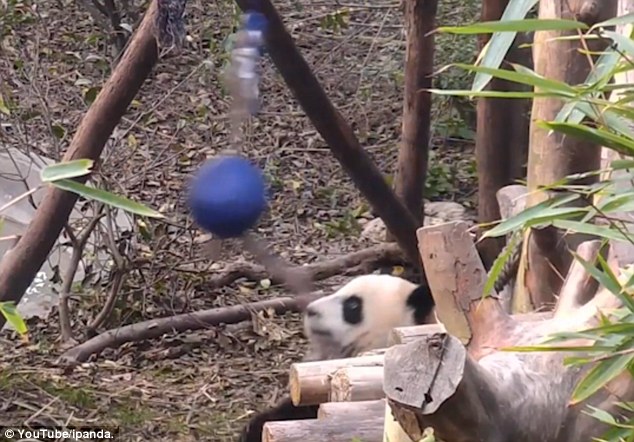 The panda seems stunned at what has happened and takes a few seconds to clamber to its feet, while cringing away from the swinging rope.

After a few seconds, it tries to grab the ball again but keeps failing as he flails and tries to get a grip on it.

For the rest of the video, the panda can be seen unsuccessfully trying to get the ball. 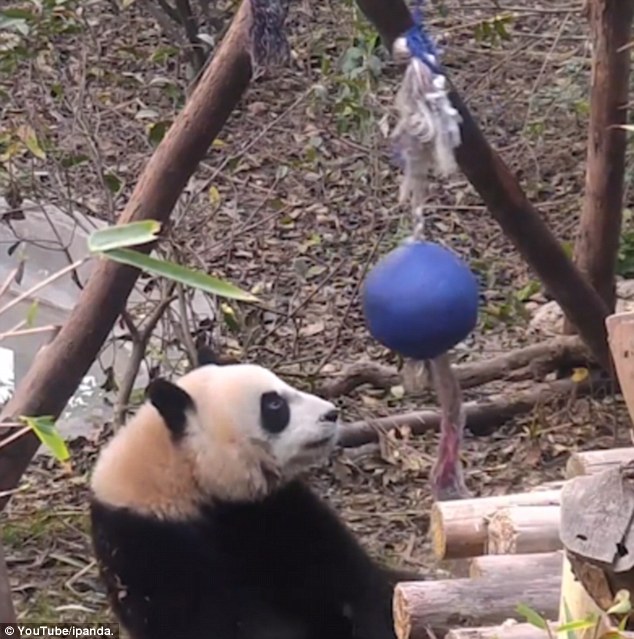 After tumbling over, the panda seems wary of the rope, although it seems determined to grab hold of the ball again