Giant on our doorstep: Papua New Guinea’s official population doubles OVERNIGHT: Researchers find the country has 17 million rather than 9.4 million

Papua New Guinea’s government officials have been left perplexed after a study revealed that the country’s population could be almost twice the previous official figure.

Papua New Guinea’s prime minister James Marape had to admit that he didn’t know how many people lived on the Pacific island nation he governed as a study from the United Nations contradicted the government’s previous total.

The United Nations Population Fund said the total population of Papua New Guinea could be 17 million – having previously thought to be around 9.4 million.

The small island nation, known for its stunning nature, sits south of the equator, sharing a land border with Indonesia. But the country is also one of the world’s most dangerous and violent nations, with large areas ruled by tribal gangs.

Papua New Guinea’s prime minister James Marape had to admit that he didn’t know how many people lived on the Pacific island nation he governed. He is pictured in November 2022

The error in population counting could have seismic implications for the country’s economy.

With the new figure almost double the previous population count, the country’s per capita income is slashed by half, making the average salary around £930.

This now makes it one of the world’s poorest countries – on a par with living standard in countries like Sudan and Senegal.

The miscalculating is embarrassing for the Papua New Guinea government, and particularly Marape who recently won reelection on the promise that he would raise the standard of living.

The government has even gone so far as to refuse the study’s publication in Papua New Guinea.

Neighbouring Australia currently gives around $600 million each year to its northern neighbour. If the new estimate is correct, the international aid programme becomes more ineffective than previously thought.

The implication of the new result also means that there is only one doctor for every 10,000 people. 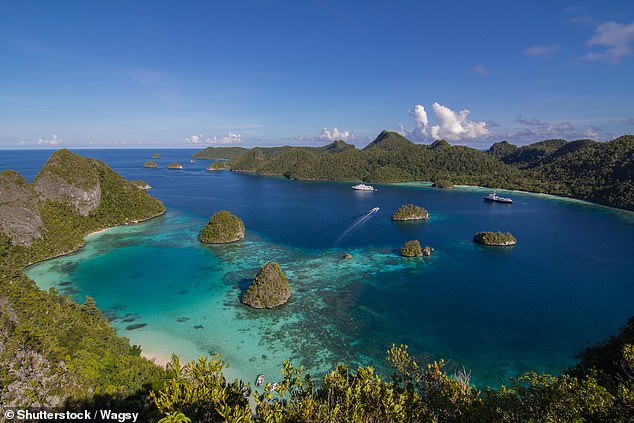 The new population estimate makes it one of the world’s poorest countries. The Tropical West of Papua New Guinea is pictured.

Prime Minister Marape hit back at the study’s claim, dismissing the estimate and saying it was far too high.

He told The Australian newspaper: ‘Whether it is 17 million, or 13 million, or 10 million, the fact ­remains that my country’s formal economy is so small, job availability is so small, the resource envelope is so small, I cannot adequately educate, provide health cover, build infrastructures and create the enabling law and order environment [that the country needs].’

The United Nations Population Fund conducted the study alongside the University of Southampton. Using satellite information and housing data, they were able to correct the mis-reported population estimate.

One thought as to why the population had gone so poorly underestimated is to an increase in people living in the island’s remote highlands. Communities live through subsistence farming, providing for themselves and going unaccounted.

It is also particularly dangerous in the highland areas, with much of the land considered ungoverned and controlled by tribal gangs.