Paradise in the Pacific: These remote French Polynesian isles offer incredible scenery and no crowds

The Land Rover’s gearbox grates painfully. Our driver William thumps the poor beast into first as we grind up the improbably steep lane.

At its peak, a moss-covered gargoyle, or tiki, stands sentinel above the settlement of Nuku Hiva and its bay far below.

It was here in 1842 that the 21-year-old American writer Herman Melville jumped ship only to find himself surrounded by Polynesian cannibals. Such was his naive charm and zest for life that he leapt out of the frying pan and into the arms of the much-feared Taipi tribe.

He spent several splendid weeks in their embrace and went on to base his bestseller Typee on the experience, before sketching one of the main characters in Moby Dick on the ‘noble savages’ of Nuku Hiva. 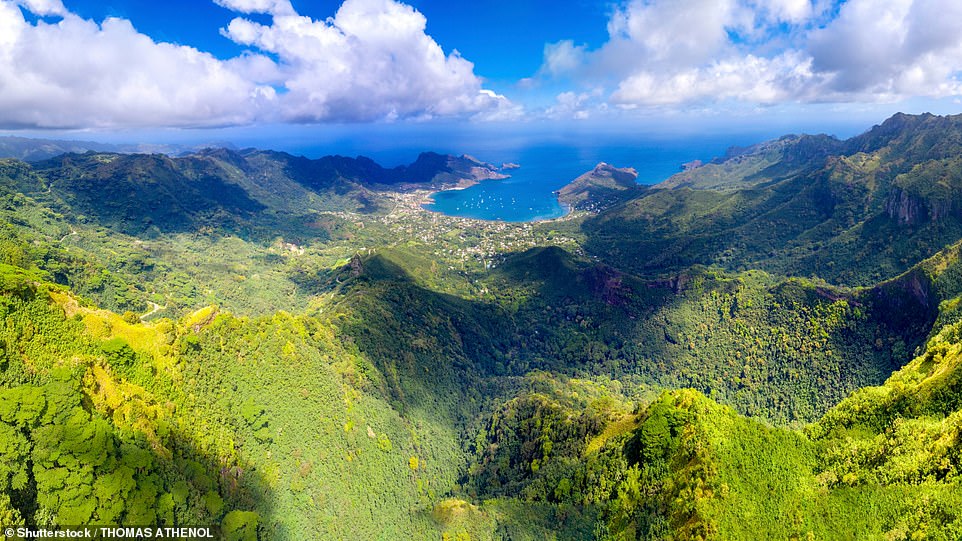 Edge of the world: A magnificent aerial view of crescent-shaped Taiohae Bay

I am smack bang in the middle of the South Pacific — in the Marquesas Islands, part of French Polynesia. Halfway between San Francisco and New Zealand, Nuku Hiva is the largest of these.

You first fly to Tahiti (10,000 miles from London), then board a three-hour flight for a further 1,000 miles. Door to door it takes 30 hours, but what is 30 hours in the grand scheme of things, when you’re not halfway to paradise but actually knocking on its door?

We weave our way across an island of vertiginous basalt stacks that jut out of the ocean, past 1,000ft waterfalls that thunder down canyons. 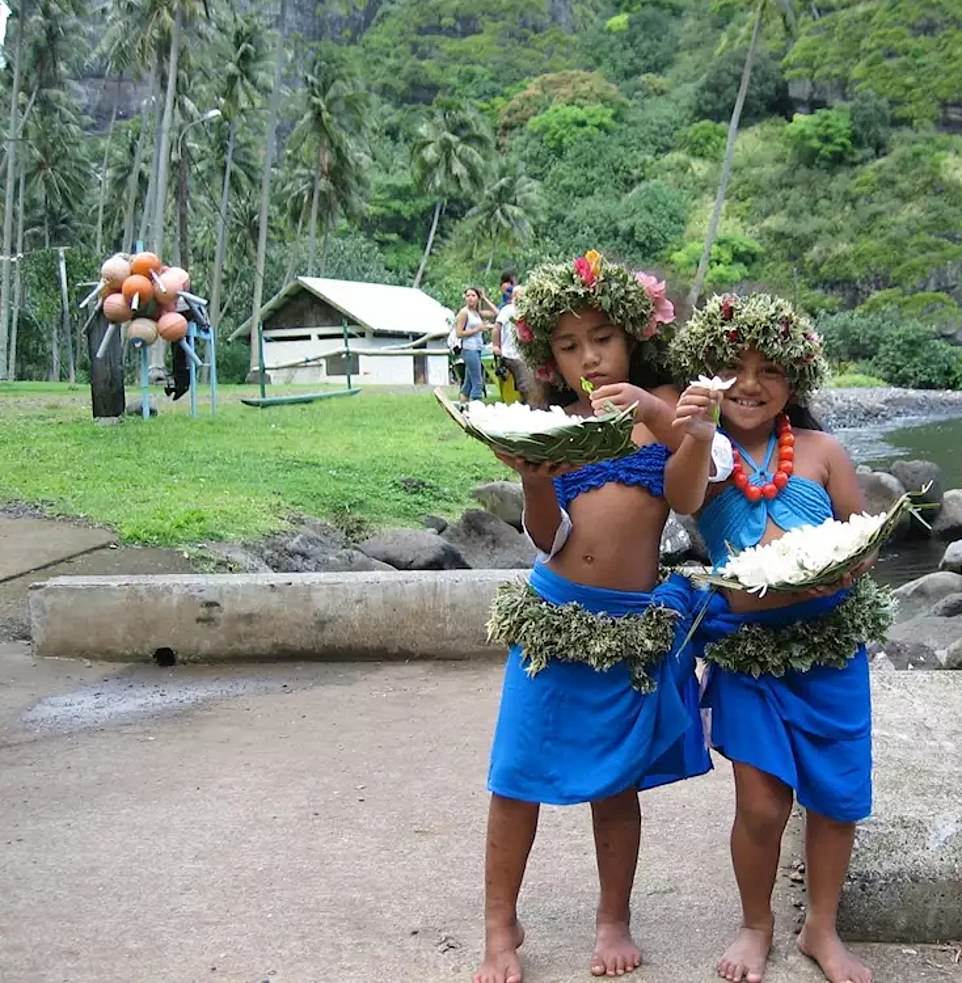 Local children on the Marquesas Islands, which lie smack bang in the middle of the South Pacific 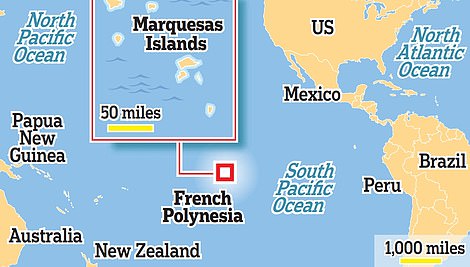 We pass white Robinson Crusoe beaches next to beaches of black sand. ‘First came the French missionaries. The whaling boats came later, bringing with them alcohol, firearms and syphilis,’ says William, with practised ease. ‘The alcohol was OK.’

We have just driven past the island’s jail, which has space for three. It’s the only building we have seen since leaving the airport an hour ago.

I ask if there’s much crime and William says ‘none whatsoever’. So, anyone locked up just now? ‘Yes,’ he says. ‘It’s also a drunk tank.’

We pass through emerald forests, ravines and valleys until we reach the bay on the other side. Here the 3,000-strong colony of Nuku Hiva resides. It’s an overseas French territory where cannibals were converted to Catholicism in the late 19th century — good news for future tourism, not to mention the island’s gastronomy.

We check into the Keikahanui Pearl Lodge with its ocean view bungalows, infinity pool, cocktail bar and suitably Gallic restaurant. Apart from this well-run high-end hotel, there is nothing to suggest luxury on the island. It is a place for hiking, horse-riding, diving and breathtaking scenery. 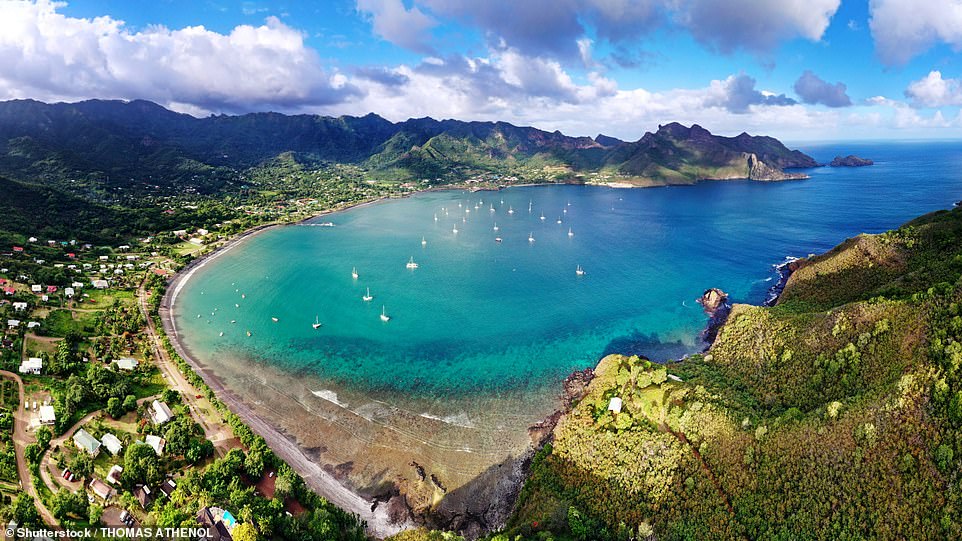 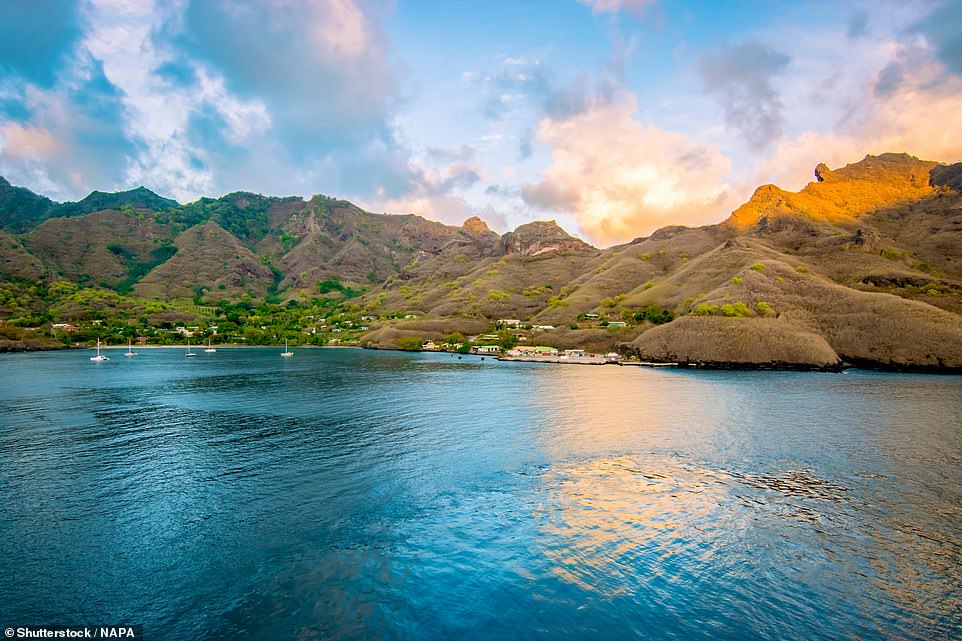 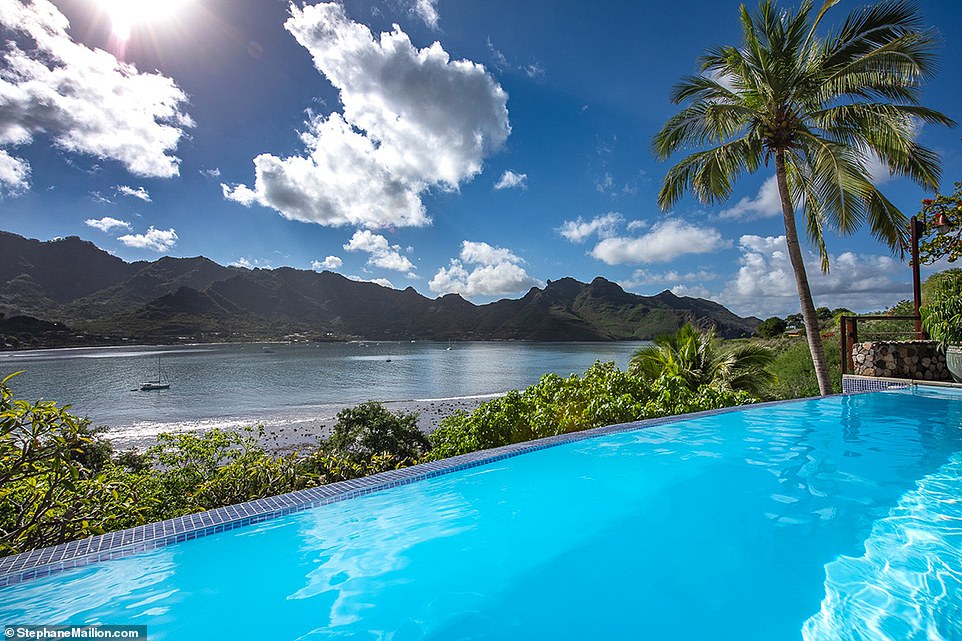 Mark checks into the Keikahanui Pearl Lodge, a luxury hotel on the island that boasts ocean-view bungalows and an infinity pool (above) 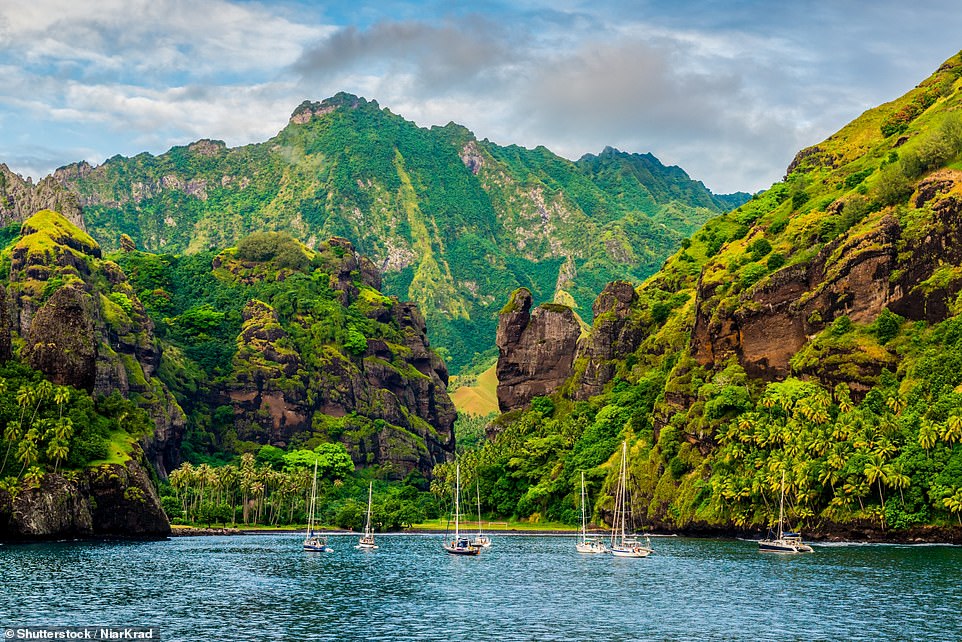 Pictured is Fatu Hiva, the southernmost isle in the archipelago. Mark notes that painter Paul Gauguin spent time on the islands 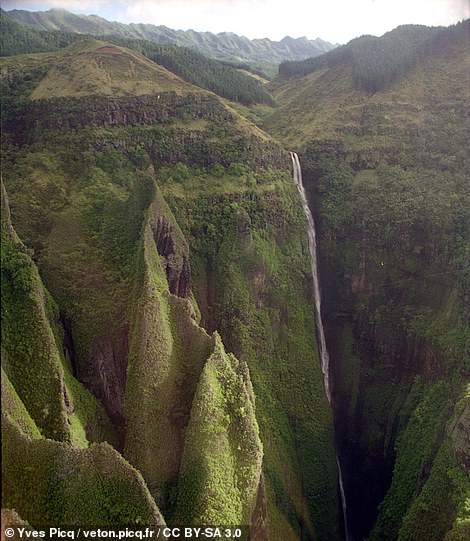 Vaipo Waterfall on Nuku Hiva, which has a drop height of 1,148ft (350m). Pictured courtesy of Creative Commons

One can easily see why Robert Louis Stevenson and Jack London followed in Melville’s footsteps, and why the painter Paul Gauguin and Belgian singer Jacques Brel were also drawn to the Marquesas.

The local men all greet each other with fist bumps and the ‘hang loose’ shaka sign nicked from Hawaiian surfing culture. The latter consists of extending the thumb and smallest finger while holding the three middle fingers curled and rotating the hand for emphasis.

There’s certainly a lot of chilling and shaka-ing. The heavily tattooed and heavily built men seem to be hang-out professionals, never doing nothing nor discernibly doing anything, either. But when it’s 35c and quite humid, you pace yourself until the hour of the sundowner.

Across crescent-shaped Taiohae Bay, the Aranui 5 sails in. This is the cargo ship that supplies the six inhabited Marquesas Islands with Heineken, toothpaste and bras.

It is also a luxury liner and takes 230 passengers on its 14-day tour from Tahiti. The no-nonsense cargo foredeck conceals the swimming pool, bar, restaurant and the corridors of teak-lined cabins.

I go onboard to inspect and enjoy a cold beer under a fan in the bar with a Parisian banker and her husband, before William arrives to take us for some sightseeing.

The shoreline is deeply scarred by inlets, and the deep blue bays shimmer under the insistent sun. But soon we are in a shady bower, clambering on foot over awkward terrain to reach a 500-year-old banyan tree. 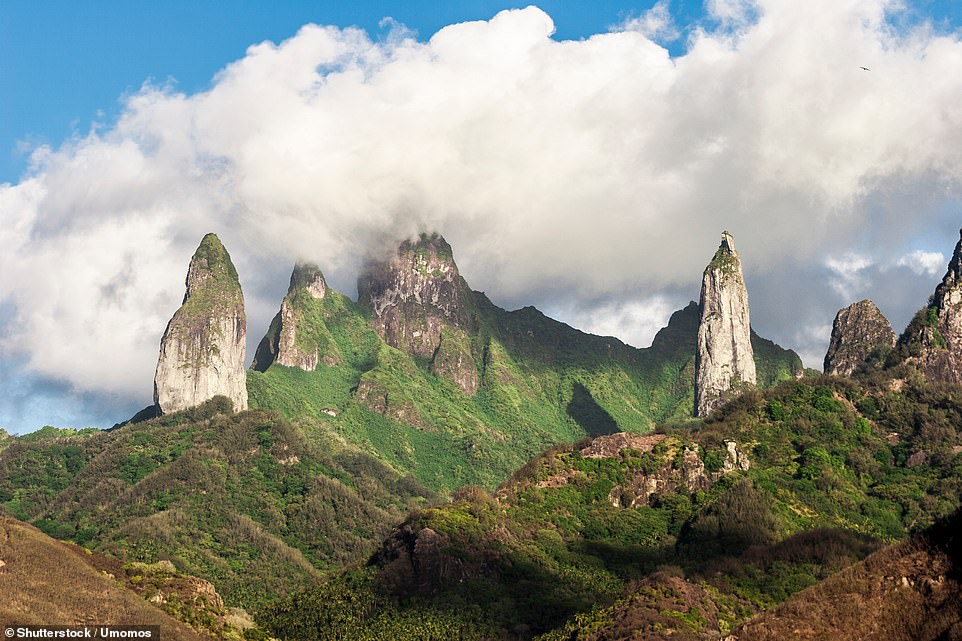 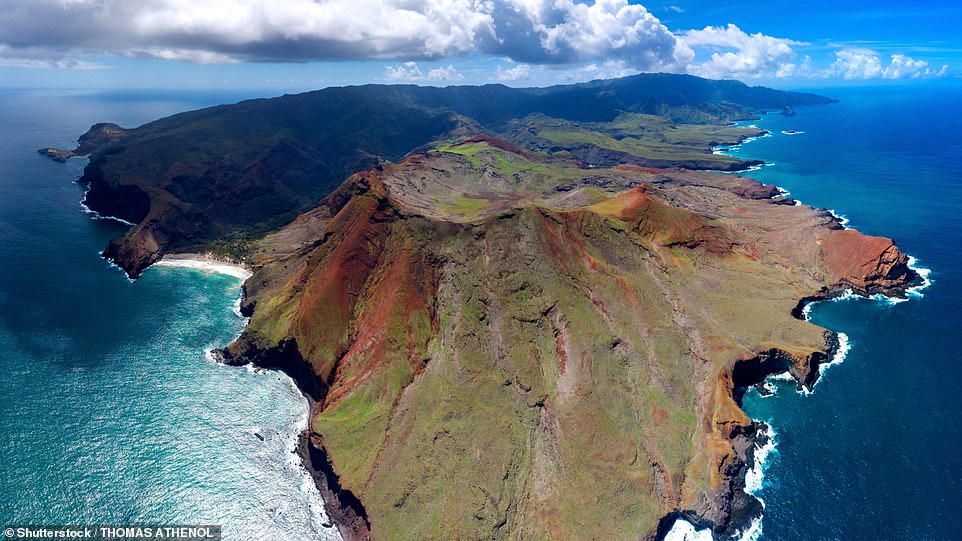 The island of ‘Ua Huka also sits in the archipelago. During his visit, Mark spies the one cargo ship that supplies the six inhabited Marquesas Islands with Heineken, toothpaste and bras

French Bee has return flights from Paris to Papeete in Tahiti from £1,188 (frenchbee.com). Papeete to Nuku Hiva returns cost from £591 (airtahiti.com).

For further information, go to: tahititourisme.uk/en-gb.

In Melville’s time its hundreds of interconnecting trunks were stuffed with human skulls and bones. The dead were left to dry in the wind, then stripped of their flesh before their skeletons were disposed of in the higher branches. Underneath is a 20ft dungeon where prisoners were kept amid the smaller human bones in a fearful ossuary. There is a terrifying feel to the place (and more than a whiff of sulphur), so we gladly depart for a beachside restaurant next to the cathedral.

I attend a colourful and glorious-sounding Sunday mass, before eating an excellent chicken curry prepared by a bustle of voluble women in an open kitchen.

Nuku Hiva translates as ‘Land of Men’ and this is still true. It is a socially mobile patriarchy, whereby someone of low birth has always been able to rise up the ranks by virtue of his strength, bravery and leadership. We return to the hotel, past the soothing, rustling sounds of gravity sucking waves back across the sands, punctuated occasionally by the tinkle of goats’ bells.

This is a communal society and if you fancy a kid for dinner (the four-legged variety), you grab one, as there are free-range herds roaming all over. The Marxist principle of property being theft prevails agreeably.

I contemplate a laminated menu floating on my back in the infinity pool, a second dry martini on the table. Sometimes the simplest things give the greatest pleasure. 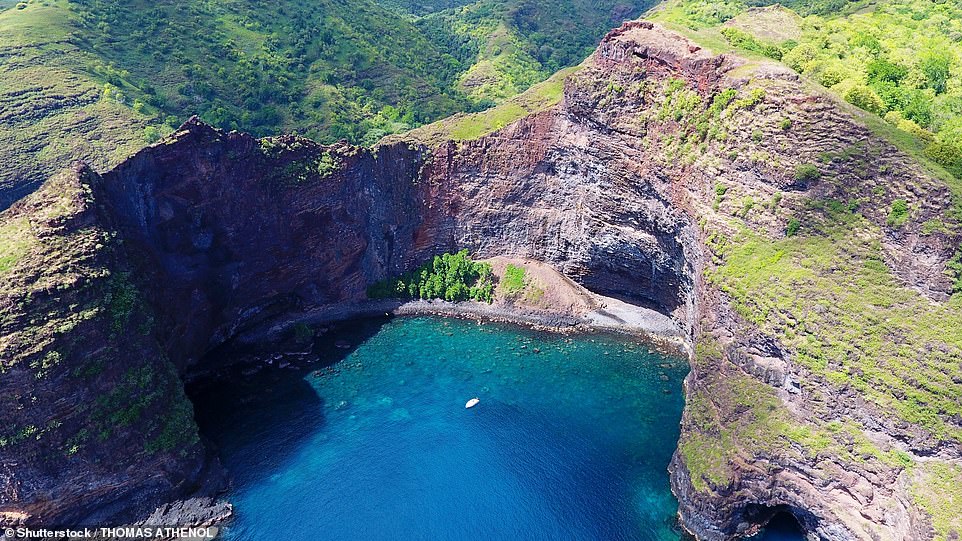 The coast of ‘Ua Huka. Novelists Robert Louis Stevenson and Jack London are among those to have explored the Marquesas Islands

A 15-night trip to Moorea, Bora Bora and the Marquesas Islands costs from £6,540pp with Turquoise Holidays. Above is ‘Ua Huka