A television presenter was left stranded on a budget plane when her wheelchair was taken away by staff.

Sophie Morgan, 33, who hosted Channel 4’s 2016 Paralympics coverage in Rio was waiting for 40 minutes on an empty easyJet aircraft after it touched down in Gatwick yesterday morning.

Miss Morgan, who was paralysed from the chest down in a car accident in 2003, posted a photograph of herself on the deserted jet with a message to the airline.

She wrote: ‘What is the point? Just please start treating us with more respect. Your staff were helpful but the whole system is pathetic.’

Stranded: Television presenter Sophie Morgan was left stranded on an empty easyJet plane for 40 minutes yesterday after the aircraft landed in Gatwick

Ms Morgan tweeted Gatwick: ‘It has happened far too often. This sort of service is almost the norm now. Incredibly rude staff made the situation even worse.’

She hit out just days after BBC security correspondent Frank Gardner, 56, found himself stranded on a plane at Heathrow for nearly two hours because his wheelchair had been ‘lost’.

A Gatwick spokesman told The Express they apologised ‘unreservedly’ to Sophie Morgan for this incident which is completely unacceptable and falls far short of the level of service.

EasyJet has already come under fire this week for its treatment of disabled passengers after former Paralympian Sophia Warner was asked to ‘prove’ her disability to bungling staff. 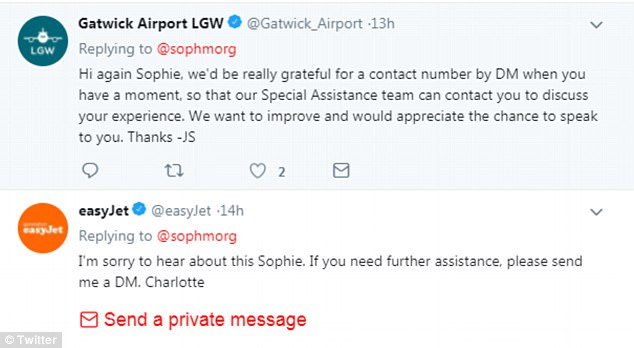 ‘I’m sorry about this’: EasyJet and Gatwick apologised to Miss Morgan on Twitter

She was asked: ‘You look completely normal. Why do you need help?’.

Sophia Warner, 43, who has cerebral palsy, said she ‘cried all the way home’ after the flight from Milan to Gatwick yesterday.

Ms Warner, who also presented coverage of Rio 2016 for Channel 4, took to Twitter to complain about her treatment at the hands of easyJet, who have been forced to apologise.

She said: ‘I’ve not complained on twitter before. The order to publicly prove my disability incident by yesterday was beyond devastating.

‘I was told “you look completely normal. Why do you need help” I cried all the way home. I don’t even know where to begin’. 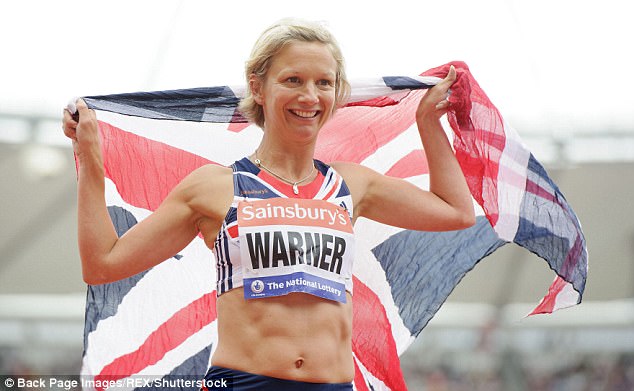 Athlete Sophia Warner, 43, who has cerebral palsy, asked to ‘prove’ her disability by easyJet staff who asked: ‘You look completely normal. Why do you need help?’ 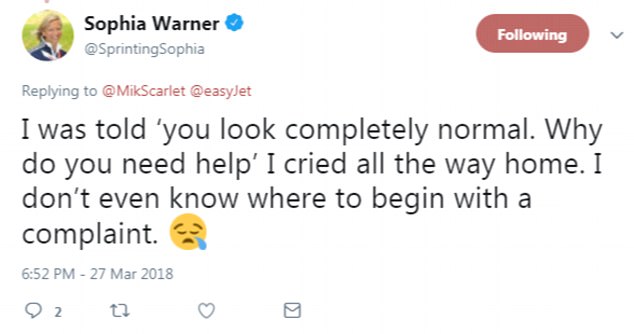 Others quickly responded to her tweets to give their own experiences.

One said: ‘They made me walk all the way out of the plane before it took off so I could explain how to take my wheelchair to the hold to yet more hopeless baggage handlers.

‘The plane was delayed and the other passengers blamed me even though it was easyJet’s fault for not boarding me first!’ Another added: ‘Don’t let it go Sophia’.

EasyJet has apologised about the incident.

A spokesman said: ‘We’re sorry to hear of Ms Warner’s experience. We are in contact with her to understand what happened.

‘The safety and wellbeing of our passengers and crew is easyJet’s highest priority.

She gave up her £75000-a-year job to pursue professional running in the build-up to London 2012 and finished fourth in the final of the 200m with a personal best time.