‘Let’s see how far we can go with this technology’

David Mzee, 28, from Zürich, became paralysed after a sports accident in 2010.

His injury meant he could only stumble a few steps with a walker, which left him exhausted.

After 262 sessions of advanced rehabilitation with a exoskeleton, doctors at a leading paraplegic centre told Mr Mzee his brain function would unlikely improve enough for him to ever walk again.

With no control over his left leg and limited movement in his right limb, Mr Mzee underwent the surgery to have electrodes placed in his spine.

After just five months of training, Mr Mzee has regained control over all the muscles in his left leg and many in his right.

He can even take a few steps without any help.

And with a support sling, Mr Mzee can walk more than a kilometre or for up to two hours with just a few breaks.

‘It’s an amazing feeling. Over time, I was able to use less body-weight support and rely less on the help of physiotherapists during sessions,’ he said.

‘My left leg used to be fully paralysed. Now I can do a knee extension of my left leg without electrical stimulation, flex my hip and even move my toes.’

Although Mr Mzee still relies on a wheelchair to get around, he has had a weight-support harness installed at his home so he can continue training.

‘Let’s see how far we can go with this technology,’ he said.

David Mzee has regained control over all the muscles in his left leg and many in his right limb after being paralysed in a sports accident in 2010. He can even walk for two hours

‘Doctors told me that I would never walk again’

Gert-Jan Oskam, 35, of Nieuwendijk in the Netherlands, was left unable to walk after being involved in a traffic accident while cycling home from work while living in China in 2011.

After 50 rehab sessions, Mr Oskam’s recovery started to plateau, with him being unable to lift his legs even when lying down.

‘The doctors told me that I would never be able to walk again, he said.

Mr Oskam can even take a few steps without his crutches as long as he has the support of a friend or researcher by his side.

Now able to stand, Mr Oskam jokes he has even been cooking on the BBQ.

‘But someone has to hold me for security reasons, although I should be able to have a BBQ standing on my own in the near future!’ he said.

Mr Oskam added: ‘The clinical trial has given me hope.’ 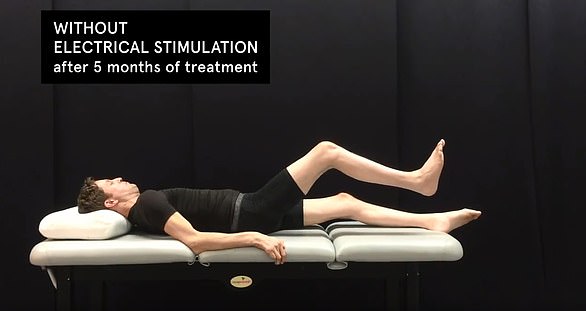 Before the study, Gert-Jan Oskam was unable to lift his legs even while lying down after being involved in a traffic accident in 2011. After five months of the treatment, Mr Oskam was able to control his legs even when the electrodes were turned off

Sebastian Tobler, of Fribourg, Switzerland, was left paralysed after a mountain-biking accident in 2013.

His spinal cord injury was so severe doctors even claimed they had no walking rehabilitation program to offer him.

Determined to find a way to exercise, Mr Tobler designed and built a three-wheeled lying down bike for paraplegics, with both hand and leg-operated brakes.

The Swiss scientists have since adapted his bike to allow him to cycle with the use of electrical stimulation.

Mr Tobler can now walk hands-free in the lab – and cycle uphill.

‘The electrical stimulation gives me the opportunity to train, gets my blood flowing, and more exciting, gets me out in the forest,’ he said.

Due to the severity of his injuries, Mr Tobler has seen less improvement than the other two patients.

He added, however: ‘I’ve noticed better core stability in my daily life.’

Mr Tobler plans to continue training at the centre twice a week for the next three years once the study has ended.