A man who was paralyzed in a tragic accident made his girlfriend’s dream proposal come true when he got down on one knee and asked her to marry him using a robotic exoskeleton.

With the help of the wearable electromechanical device, Josh Smith, 30, from Richmond, Virginia, was able to surprise the love of his life, Grace Thompson, in more ways than one when he popped the question on June 25.

A video of the heartwarming proposal that was shared by Good Morning America, shows Smith on one knee with a ring box in his hand — a  scene that shocked his bride-to-be.

Defying the odds: Josh Smith, 30, from Richmond, Virginia, used a robotic exoskeleton to surprise the love of his life, Grace Thompson, with her dream proposal 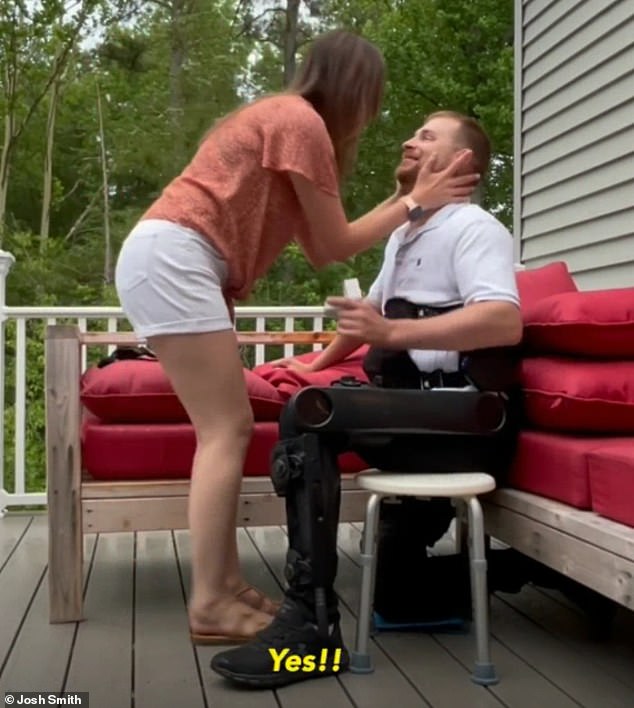 Surprise! A video of the heartwarming moment shows Smith — who is paralyzed from the neck down — on one knee with a ring box in his hand, a scene that shocked his bride-to-be 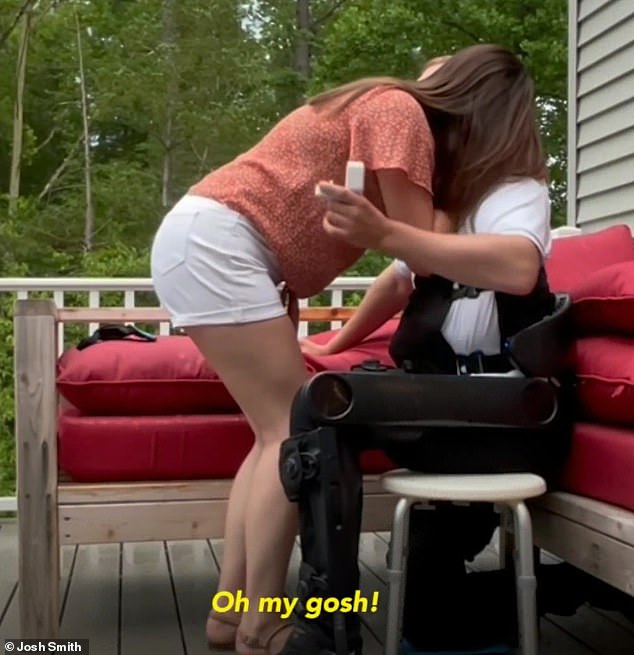 Engaged: Thompson responded with an enthusiastic, ‘Yes!’ and they shared a sweet kiss

‘Are you serious?’ she asked in surprise.

Thompson responded with an enthusiastic, ‘Yes!’ and they shared a sweet kiss.

In 2014, Smith’s life changed forever after an accident at Virginia Beach left him a C-6 quadriplegic. 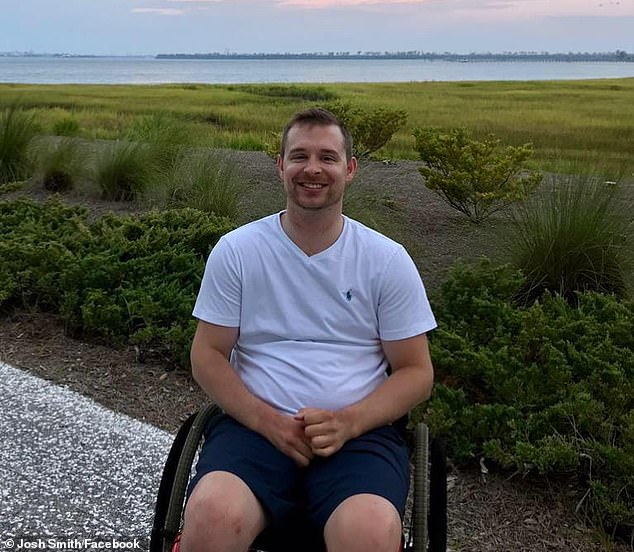 Tragic accident: Smith’s life changed forever in 2014 when he dove into a wave at Virginia Beach and hit his head on a sandbar, instantly paralyzing him from the neck down 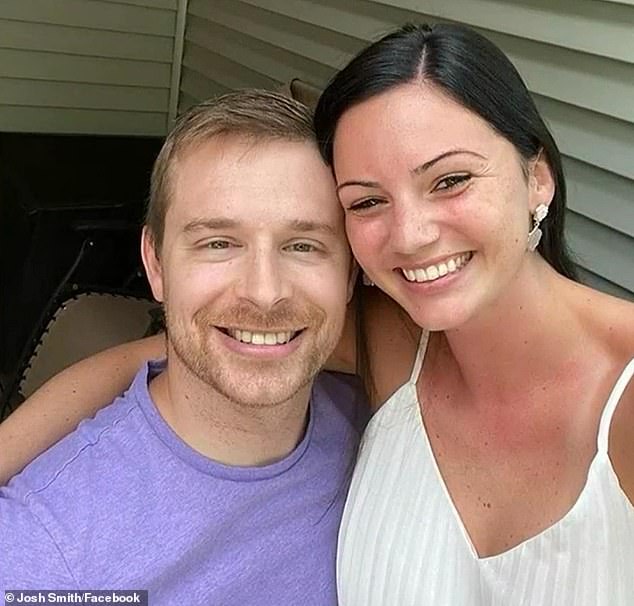 Love at first swipe: Last February, he met Thompson on Bumble, and they had an instant connection

Dream come true: Smith was able to surprise Thompson and give her the proposal she had always envisioned with the help of the exoskeleton he uses in physical therapy

‘I dove into a wave like I’ve done in the past many times. This time, there was a sandbar,’ he told WWBT. ‘My head immediately hit the sandbar, and I was instantly paralyzed from the neck down.’

Last February, year afters his accident, he matched with Thompson on Bumble, and they had an immediate connection. Soon, they were planning their futures together.

‘Any little girl when they think about getting married and stuff, you’ll always picture the guy on one knee,’ Thompson told the news station. ‘I just had to kind of change my vision.’

Smith was determined to give Thompson the proposal she had always envisioned, and thanks to his family, friends, therapists, and the exoskeleton he uses in physical therapy, he was able to pull it off. 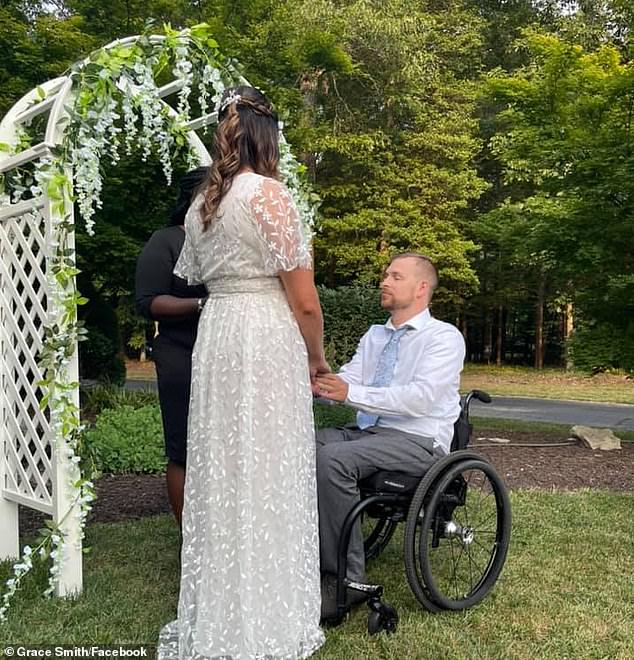 Wedding bells: The couple said ‘I do’ in a small ceremony on July 19, less than a month after he proposed 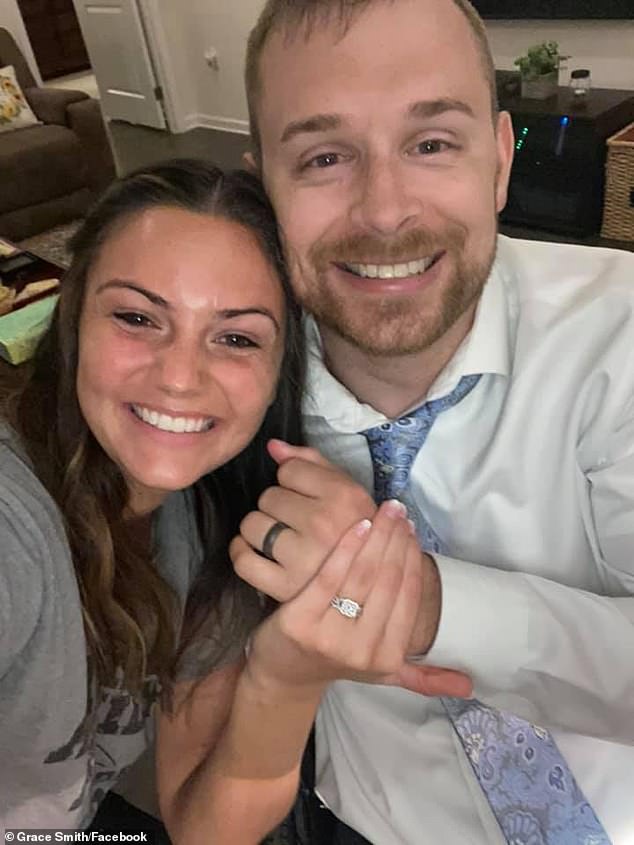 Next up: Smith and Thompson plan on having a bigger wedding ceremony next year 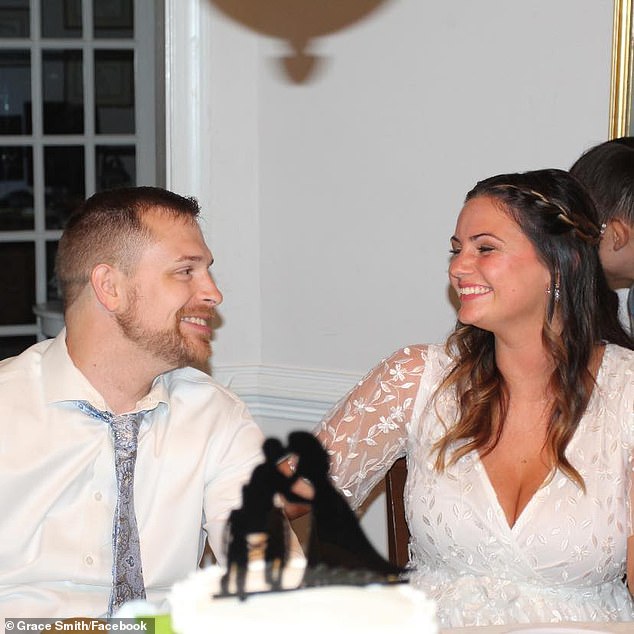 Aww: ‘I love her so much, so I want to be able to give her everything that I can,’ Smith told WWBT earlier this month

‘I knew I wanted to do something special for her and surprise her,’ he said. ‘I had used the exoskeleton that I used during the proposal a few times during therapy. I knew about the device, but I had never seen anyone use it to get on one knee.’

When Smith got down on one knee last month, he gave Thompson a ring featuring a diamond that belonged to her grandmother.

‘I love her so much, so I want to be able to give her everything that I can,’ he said. ‘Sometimes I can’t do that, but when I find areas where I can do that, I strive to my hardest to do that.’

The couple wed in a small ceremony on July 19, with plans to have a bigger wedding next year, WWBT reported.