Tyler Wilson has fought for his country, his life and, most recently to have a son.

A combat injury during a 2005 rescue mission in Afghanistan left Tyler paralyzed from the waist down, and unable to have children without IVF.

But when he and now-wife, Crystal were ready to start a family, the Department of Veterans Affairs refused to cover the costs.

After lobbying Congress, raising funds for themselves and going through exhaustive fertility treatments, the couple had their son, Matthew, last March.

But they are far from through fighting: Tyler and Crystal want to add another child to their family and are continuing to push Congress to make its temporary allotment of funds for reproductive treatments a permanent program.

Cpl Tyler Wilson and his wife, gave birth to their son, Matthew, in March 2017, after two rounds of IVF to help them conceive despite the fact that Tyler is paralyzed from the waist down. Now, the couple hopes to get another round of IVF and have a second child

There are 1.3 million men and women serving in the US military, putting their lives and well-being on the line.

For some, like Tyler, military service forever alters their life plans.

Tyler always knew that he wanted two things: to serve his country and to have a family.

He did not anticipate that one might come at the cost of the other.

Like many other servicemen, Tyler sustained an injury that left him with viable sperm, but unable to conceive on his own.

When he was 20, a Corporal in the Army, and on his first tour of duty in Afghanistan, Tyler and his unit were trying to rescue a group of scouts.

He parachuted to the ground, but didn’t make it far before four bullets tore through Tyler’s body.

The first of those hit his spine, paralyzing him almost instantly. Another pierced his lung and lodged itself in Tyler’s liver.

That was the end of Tyler’s military career, and nearly of his life.

At Walter Reed Veteran’s Hospital Tyler ‘awoke from my coma and began my new journey as a paraplegic,’ he writes on the blog he and Crystal maintain, Push Me Every Day.

For the next eight years back in Colorado, Tyler spiraled, directionless without his military service and feeling as though his paralysis had cut him off from athletics and the outdoors.

But then, in 2013, he found a way out about an ‘adaptive sports’ program designed to help veterans with disabilities learn to do the things they loved in new ways. 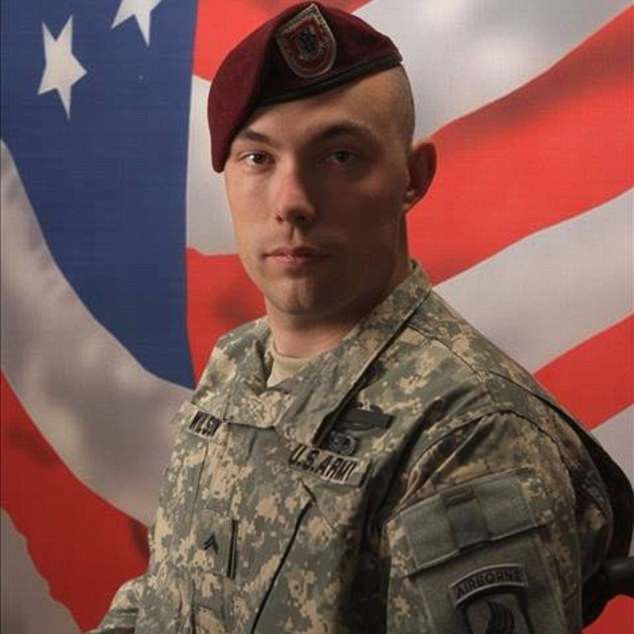 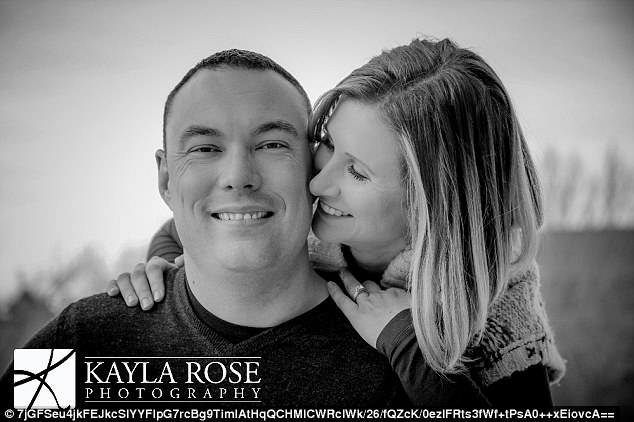 Tyler and Crystal met in 2013 when he enrolled in an adaptive sports therapy, where Crystal  worked Tyler and helped him learn to get back to the outdoor activities he loves

Crystal, a therapist with the program ‘found a way o inspire me and helped me reignite my passion for living a life of wellness again,’ Tyler writes.

She taught him to handcycle and monoski, opening up a world of adventure that Tyler had thought was gone for him forever.

Their partnership moved from athletic to romantic, and the two were married in July 2016.

Both Crystal and Tyler desperately wanted children, and both knew what a challenge they had ahead of them.

Crystal had lived for years with endometriosis, but had discovered shortly before meeting Tyler that it might be possible for her to have children one day.

For Tyler ‘no surgery or procedure would be able to restore function,’ and he would not be able to have a family.

Before Tyler met Crystal, he ‘found those three wonderful letters: IVF. I learned that my dream did not have to remain JUST a dream,’ he writes. 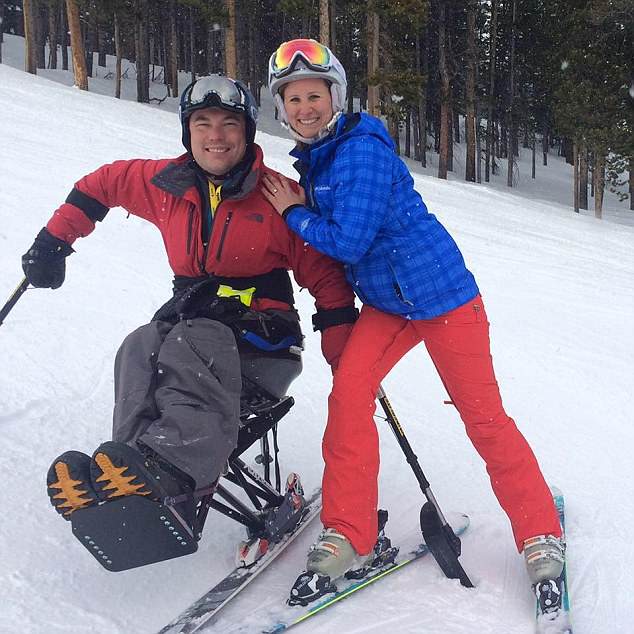 Crystal taught Tyler to monoski and the two enjoy time on the slopes together near their home in Denver, Colorado 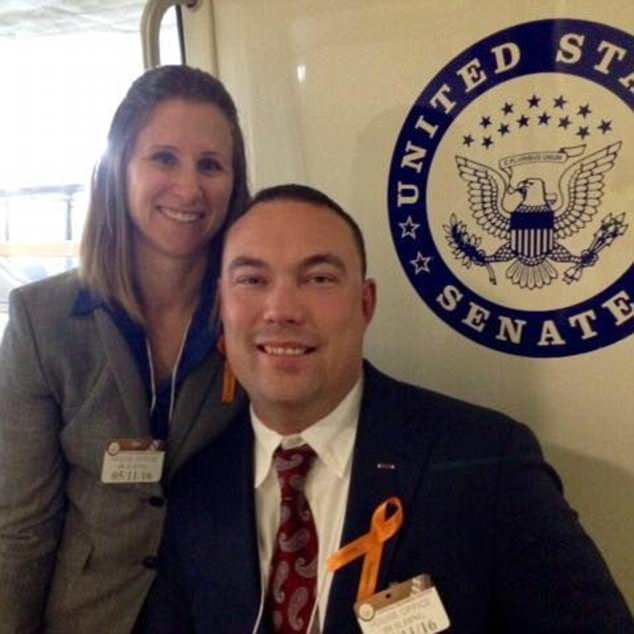 When they found out that the VA would not cover IVF for Tyler and Crystal, the determined couple traveled to Washington, DC where they lobbied lawmakers to change the policy

Together, with the help of IVF, the pair felt like they had a second chance at the family they had each always wanted.

But the Department of Veteran’s Affairs would not cover IVF for the couple, even though his combat wound was the cause of Tyler’s sexual dysfunction, and they could not afford the treatment on their own.

‘I finally found the woman who I want to spend the rest of my life with, who I want to be the mother of my children, yet we are seemingly at the mercy of Washington bureaucrats deciding if we should be allowed to have the family that we both long for,’ Tyler writes.

The couple traveled to Washington, DC to plead with lawmakers to change the VA’s coverage to include IVF.

Meanwhile, they continued to advocate for themselves, raising money through a GoFundMe page to cover $14,000 they needed toward IVF.

As they continued to raise money and go through two cycles of IVF treatments, Congress temporarily made funds available for veterans whose reproductivity was impaired by combat-related injuries in January. 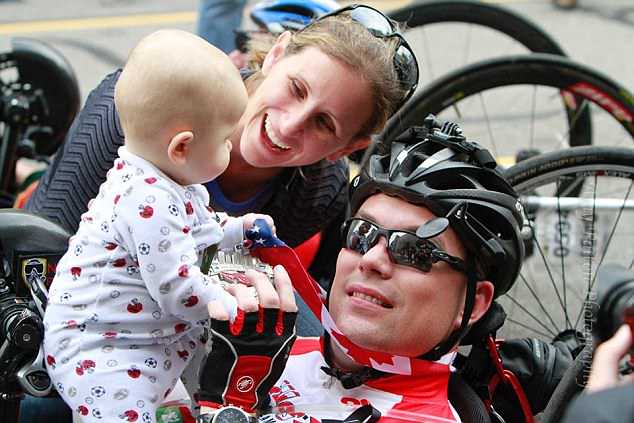 Tyler and Crystal celebrate a successful handcycle ride with their son, Matthew, now one

Crystal and Tyler had outpaced the government, though. One of the embryo transfers was a success, and in March 2017, they welcomed their son, Matthew to the world.

Now, Matthew is just over a year old and his parents are ready to try again.

This time, they will likely be able to take advantage of the VA funding they fought so hard for.

The couple is also continuing to advocate for IVF for veterans, in the hopes that funding allocation will become permanent.

According to the latest reports, 1,367 male US service members have suffered injuries to their genitals since 2001 – more than in any previous war.

Thousands more veterans suffer sexual dysfunction as a result of PTSD or spinal injuries like Tyler’s.

‘We fight so families diagnosed with infertility who want nothing more than to have a child can have the moments of… witnessing the birth of their child…seeing those first steps, every moment in between and to follow,’ Crystal writes on the couple’s blog.

‘We have dedicated ourselves to this fight, so that any person who has been diagnosed with infertility and wants these moments will have the opportunity to try for them.’