Fewer than a third of parents think making their child’s lunch healthy is the top priority and three quarters even admit to feeling guilty about what they pack.

Young children are most likely to be sent to school with a ham sandwich, a yoghurt, a packet of crisps, an apple and a carton of fruit juice.

And a lunch of those items would contain an average of 25g of sugar in a single meal – a gram more than the recommended 24g per day for nine-year-olds.

The worrying revelations come just three months after NHS figures revealed more than a third of 11-year-old children in the UK are overweight.

Experts warn parents need to make sure their children are eating healthily throughout the day to give them a good start in life.

More than 130,000 children in the UK are obese before they leave primary school and experts warn parents are sending them to school with lunchboxes chock-full of more sugar than they need for an entire day

The charity Action for Children used polling results from 4348 adults – 535 of whom have children aged between five and 13 – to make its findings.

It found the typical nine-year-old’s lunchbox contained a third of the child’s calories, nearly half of their salt intake and more sugar than is needed for a whole day.

And this could be eaten on top of the huge amounts of sugar found in popular cereals like Coco Pops and Frosties which children eat before they even arrive at school.

Other popular lunchbox foods include chocolate bars and cakes which push the health risks even higher.

Three quarters of parents confess they feel guilty about what they give their children to eat, but may be worried they won’t eat it.

Parents’ top priority is making sure children eat the food

Surveyed parents’ top priority – 38 per cent said it is most important – is sending their children to school with a lunch they are sure the child will eat.

Only 28 per cent of parents say making sure a lunchbox is nutritious is their main concern.

Emma Horne, Action for Children’s director for England South said: ‘Most parents understand the pressure to pack a lunchbox that will come home empty at the end of the day.

HOW TO MAKE YOUR CHILD’S LUNCHBOX HEALTHIER

Action for Children experts say there is ‘no need’ for a child’s lunchbox to contain chocolate, sweets, crisps or other unhealthy snacks.

And the most popular things to put in a lunchbox are ham sandwiches, yoghurts, crisps, apples and cartons of juice.

The charity gives recommendations for swaps you can make to make your child’s lunch to make it healthier:

‘And it makes things even harder when you’re time-poor and budget conscious.

‘We need to save our children from health problems’

‘But it’s clear that childhood obesity is a problem we need to tackle, to save our children from suffering physical and mental health problems when they grow up.

‘Getting eating habits right in these early years isn’t as daunting as it seems with the help of a few clear tips, and it can make a lifetime of difference.’

More than 130,000 children in the UK are obese before they leave primary school, figures revealed in May.

Last year around 170,000 primary school leavers were overweight to some degree, according to the National Child Measurement Programme.

Some 22,646 of those were considered to be severely obese.

Obesity costs the NHS over £6bn a year and makes people more likely to die from cancer, stroke or heart disease.

Experts say there is ‘no need’ for crisps and sweets in children’s lunchboxes, and recommend swapping juice for water or milk, and ditching crisps in favour of chopped vegetables and houmous.

Public health nutritionist Mari Clark, said: ‘Through no fault of their own, many parents simply don’t know exactly what their child needs.

‘This isn’t helped by confusing packaging that has pictures full of fruit and happy children, when the products inside are packed with sugar and fat and salt.

‘There is no need for any lunchbox to contain crisps, sweets, processed food, cereal bars, chocolates and things like that.

‘If you have sandwich with some good quality protein, a portion of fruit, veg and dairy then that’s enough.’

POPULAR CEREALS CONTAIN UP TO 71% OF DAILY SUGAR

Recent research has warned children could be getting up to three quarters of their daily sugar allowance before they even leave the house in the morning.

A single bowl of Frosties cereal has been found to contain 71 per cent of a child’s daily sugar allowance, while Coco Pops and Rice Krispies contain more than a third – and supermarkets’ own brand breakfasts are even worse.

Research by kitchen and bathroom retailer Sinks-Taps.com this month revealed the cereals with the highest and lowest sugar content: 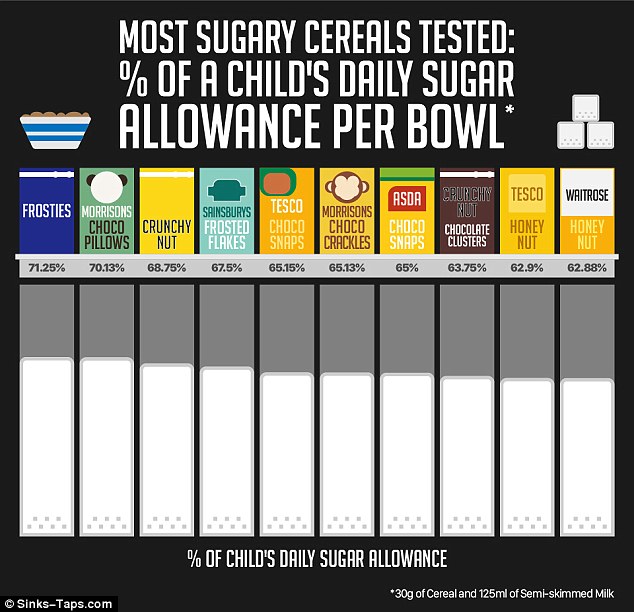 This graphic reveals the most sugary cereals on supermarket shelves, ranking them from left to right, with the most sugary Frosties, on the left, as a bowl contains more than 71 per cent of a seven to 10-year-old child’s daily sugar allowance of 24g 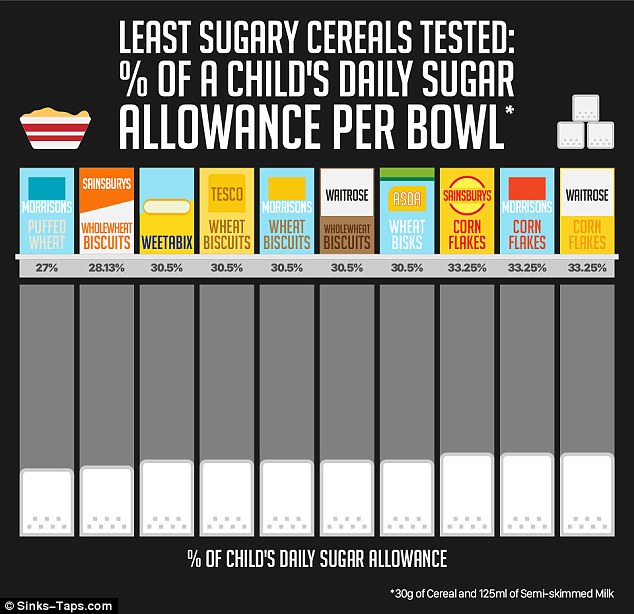 The study also revealed the least sugary cereals, ranked from left to right, with Morrisons Puffed Wheats being the least sugary on the left. However with a bowl being 27 per cent of a child’s daily sugar recommendations, a bowl still contains more than you might expect