Parents close GoFundMe for son’s liver transplant after discovering it will cost $1.1 MILLION

The heartbroken parents of a boy with a rare form of liver cancer have decided to shut down their fundraising account after learning that a life-saving transplant would cost $1.1 million – an amount they don’t believe they can raise so quickly.

Charlie Proctor, five, from Church, Lancashire in the UK, near Blackburn, was diagnosed in February 2016, with hepatoblastoma, a rare tumor that begins in the liver usually during early childhood.

Despite several rounds of chemotherapy and even surgery, the cancer metastasized, spreading across his tumor and into his lungs.

Doctors told his parents, Amber Schofield and Ben Proctor that Charlie’s last hope was a liver transplant at Cincinnati Children’s Hospital in Ohio.

They were originally told that the cost would be around £300,000 ($387,600), but after learning that it would actually be three times as much, they decided to stop raising money.

‘We realise we could never raise this in time and therefor [sic] are stopping all fund raising events. They are to [sic] much time and effort for a small amount of what we now need,’ the pair wrote in a Facebook post on Tuesday.

Charlie Proctor, five (pictured), from Church, Lancashire, was diagnosed with hepatoblastoma, a rare form of liver cancer, in February 2016

His parents, Amber Schofield and Ben Proctor, decided to stop fundraising efforts after learning that the cost of a liver transplant, first estimated to be £300,000 ($387,600), would actually amount to $1.1 million 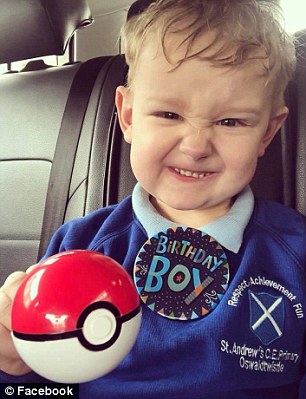 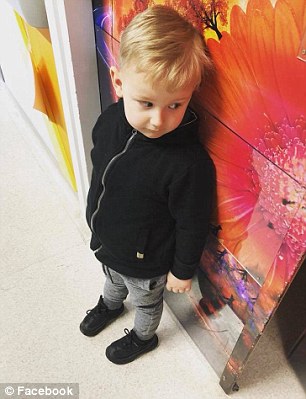 In the UK, the only treatment for hepatoblastoma is chemotherapy, with surgeries occurring rarely. Charlie (left and right) underwent more than 20 rounds of chemotherapy for six days at a time, which his parents said were stabilizing him but not curing him

There were no signs that anything was wrong with Charlie until January 2016 when Amber said Charlie’s stomach began to harden and his veins became visible.

The following month, she took him to Blackburn Royal Hospital where doctors diagnosed him with hepatoblastoma.

Hepatoblastoma is a tumor that begins in the liver and is usually found in children up to three years old.

Despite being the most common malignant liver tumor among young children, it is a rare form of cancer, affecting fewer than one in a million children, according to St Jude Children’s Research Hospital.

The exact cause is unknown but children are at a higher risk if they were born prematurely; have hemihypertrophy, which is when one side of the body grows faster than the other; or have Beckwith-Wiedemann syndrome, known as an overgrowth syndrome.

Symptoms depend on the size of the tumor and can include a swollen abdomen, abdominal pain, jaundice skin, fever, nausea and vomiting.

Hepatoblastoma is treated usually via chemotherapy first to shrink the tumor and stop it from potentially spreading and then surgery to remove the tumor.

If the entire liver is affected, then patients may need a liver transplant.

St Jude Children’s Research Hospital says that the survival rate is 80 percent if the tumor does not metastasize, or spread, and can be removed following chemotherapy.

However, if the tumor does spread or encompasses the entire liver, survival rates can range between 20 percent and 70 percent. 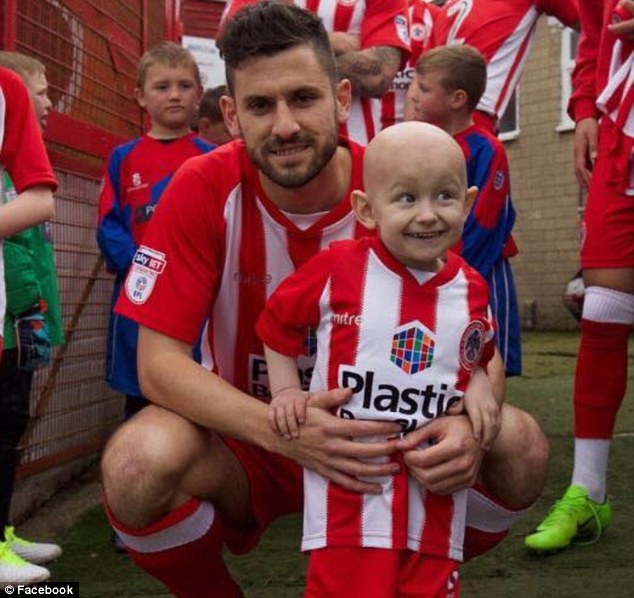 Then, in May 2017, an operation at Birmingham Children’s Hospital to remove the tumors in his liver became an option, and Charlie had the surgery. Pictured: Charlie with Seamus Conneely with the football club Accrington Stanley) 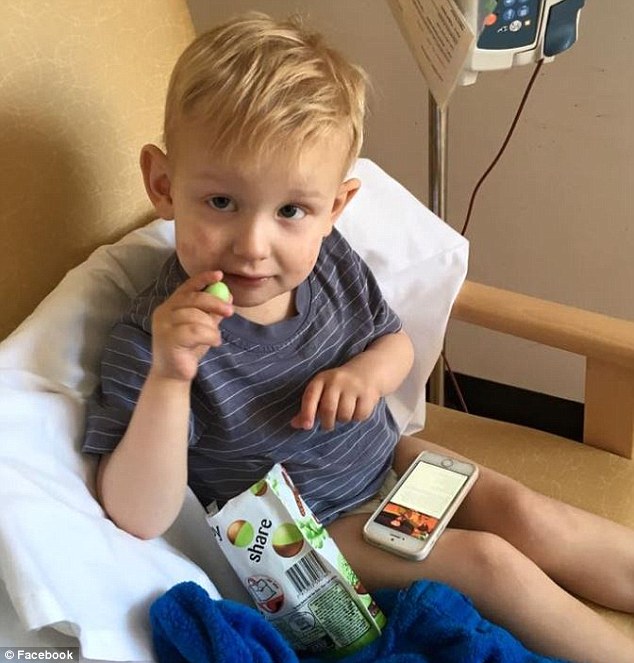 At the time, doctors told his parents that the operation was a success and that Charlie (pictured) was in remission

In the UK, the only treatment for hepatoblastoma is chemotherapy, with surgeries occurring rarely.

Charlie underwent more than 20 rounds of chemotherapy for six days at a time, which his parents said were stabilizing him but not curing him.

Then, in May 2017, an operation at Birmingham Children’s Hospital to remove the tumors in his liver became an option, and Charlie had the surgery.

At the time, Amber told the Lancashire Telegraph that doctors declared Charlie to be in remission.

Previously, Charlie had been given just a 20 percent chance of survival following the diagnosis.

And despite three tumors in each of his lungs, physicians didn’t believe they were harmful.

But a series of unfortunate events soon followed.

In early August of this year, Charlie developed a rash which doctors believed was a reaction from the chemotherapy.

They told the parents, who also have a two-year-old daughter named Jessica, that if Charlie developed further rashes, he wouldn’t be able to undergo any more rounds.

Just a few days later, doctors at Royal Manchester Children’s Hospital told Amber and Ben that Charlie had again developed several small tumors in his liver, which ruled out surgery as an option.

The only choice was a liver transplant, which the couple hoped to get in the US from Dr James Geller at Cincinnati Children’s Hospital in Ohio. 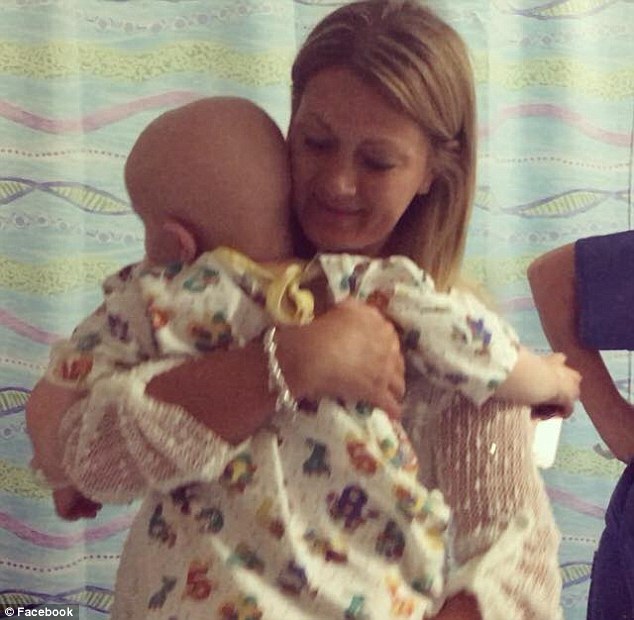 This month, doctors told his parents that several tumors in Charlie’s liver had returned. Surgery was not an option and his only choice was a life-saving liver transplant. Pictured: Charlie hugging a relative 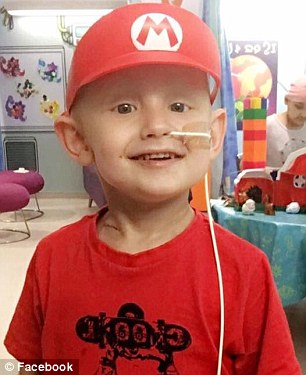 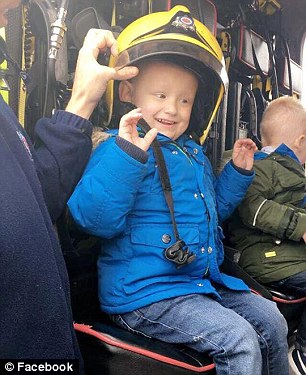 His parents worked to raise the money but shut their account down after learning the cost, knowing they could not raise that amount of money so quickly. They’ve returned to the UK to receive palliative chemotherapy, which will improve Charlie’s symptoms, but not cure him. Pictured, left and right: Charlie

‘The estimated cost of the treatment, scans, chemo will be around £300,000, but likely to be more,’ Amber told the Accrington Observer.

‘We want to fly out and hope that we can start treatment while donations come in. I beg you all to keep raising money, everyone is being so generous and we are getting so many donations.’

But, on Tuesday, the couple announced they’d be closing down the page after learning the cost of the transplant would be approximately $1.1 million.

In a post on their Facebook page, Charlie’s Chapter, where they had shared updates about their son’s journey, the couple said they weren’t giving up, but believe shutting down their account was the best option.

‘The chemotherapy Charlie is on isn’t going to cure him, yes it’s slowing the growth down but it also makes him so poorly to the point it will kill him,’ they wrote.

‘As much as it tears our hearts to bits we have to face reality, we have to see what is best for Charlie. We know he would rather make some magical memories whilst he can than keep making him poorly with treatment that isn’t going to save him.

‘We haven’t given up. We never will. We are trying him with home treatments and as much as we can to help save him but we have to try and come to terms with the outcome most likely to happen.’

Amber and Ben said they’ve returned to the UK and will be going to Royal Manchester Children’s Hospital to receive palliative chemotherapy pills, which will help shrink cancer cells and improve symptoms for a period of time, but will not cure him.