By Laurie Stone and Stephen Adams for The Mail on Sunday

The parents of a gravely ill boy are praying for a Christmas miracle that their son can beat a rare and aggressive form of cancer.

Luke Bell, eight, from Darlington, County Durham, has neuroblastoma, which, despite intensive treatment, has spread.

NHS doctors say there is little more they can do, but Luke’s parents are desperate for him to join a trial of an experimental method being conducted in Spain.

Luke Bell, eight, from Darlington, County Durham, has neuroblastoma and his parents Mark and Becky (pictured together) are trying to raise money to take him to Barcelona for a trial 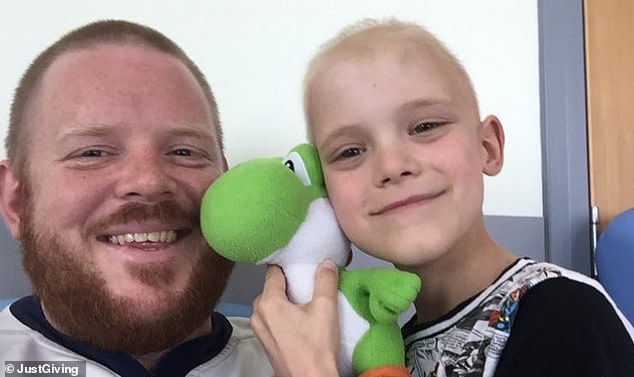 In January, the family were told Luke (with Mr Bell) was clear of cancer but by April it had returned. In November doctors said Luke’s cancer had spread to his skeletal system

His father Mark Bell told The Mail on Sunday: ‘He has been accepted on to the trial, starting on January 21, but he has to be well enough to start it.

‘In November, his NHS consultant said that his cancer had spread to his skeletal system and that his bone marrow is now made up of 70 per cent cancerous neuroblastoma cells.

Despite that, Mr Bell, 37, and his wife Becky have researched all possible options and found the trial, involving a milder form of chemotherapy with a type of antibody treatment, taking place at the Paediatric Cancer Centre in Barcelona.

As the treatment is experimental, it is not available on the NHS, but Mr Bell said Luke’s NHS consultants at the Royal Victoria Infirmary in Newcastle are supporting their bid to take him abroad for a final shot at beating the disease. 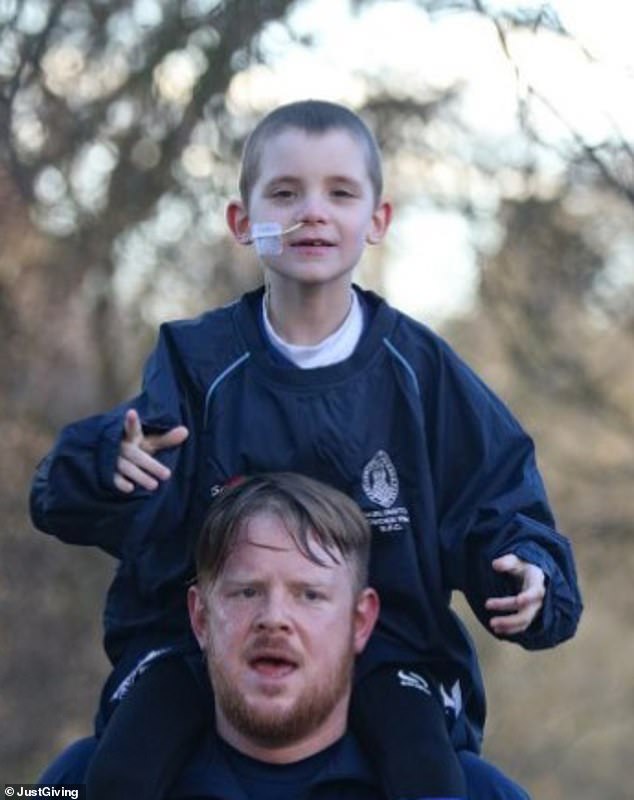 The family has been fundraising to take Luke (pictured with father Mr Bell) abroad as it will cost about £140,000, of which the Bells have already raised about £95,000

Mr Bell said the type of treatment used in Barcelona has had ‘some pretty good success’ in treating patients who have relapsed with neuroblastoma.

Neuroblastoma is a type of cancer which strikes fewer than 100 children a year in the UK.

What is rare cancer neuroblastoma?

Neuroblastoma is a rare type of cancer that mostly affects babies and young children.

It affects fewer than 100 children a year in the UK.

It develops from specialised nerve cells, called neuroblasts, left behind from a baby’s development in the womb.

Neuroblastoma most commonly occurs in one of the adrenal glands that are above the kidneys.

But can also occur in nerve tissue that runs alongside the spinal cord in the neck, chest, tummy or pelvis.

Neuroblastoma can spread to the bone marrow, bone, lymph nodes, liver and skin.

However, he added: ‘Becky and I are pretty realistic.

‘We know Luke’s chances are not great as the cancer is so far advanced, but as any parents would do, we are doing everything we can.’

Becky, also 37, said: ‘Words can’t describe how incredibly proud I am of our little boy.

‘His absolute determination and the courage he has shown throughout his battle is truly inspirational.

‘We continue as a family to hope, and are incredibly grateful to everyone for their support.’

Between then and last Christmas he had 11 rounds of chemotherapy and surgery to remove a large tumour wrapped around his adrenal gland and a kidney.

In January, the family were told Luke was clear of cancer but in April were given the devastating news that it had returned.

The couple have organised numerous fundraising events, with Mr Bell, a keen rugby player, setting up a series of charity matches.

They are also raising money through a Just Giving page.