Parents have hit out at schools and nurseries that have shut their doors and cancelled trips due to the heatwave.

Schools in Nottinghamshire, Hampshire and Oxfordshire have decided to shut, while others are closing early on Monday and Tuesday amid warnings that temperatures may hit 43C.

Some sites have allowed students to learn from home, in a return to the remote set-up seen during the pandemic.

But parents have said the ‘totally ridiculous’ situation has led to ‘chaos’ as they are forced to juggle last-minute childcare alongside their jobs.

It comes after Oasis, one of England’s largest academy chains, said its schools would stay open and labelled some establishments’ decision to shut as ‘irresponsible’.

Britain has already been brought to a near standstill by the national emergency, with trains cancelled and Luton Airport closed as its runway has melted. 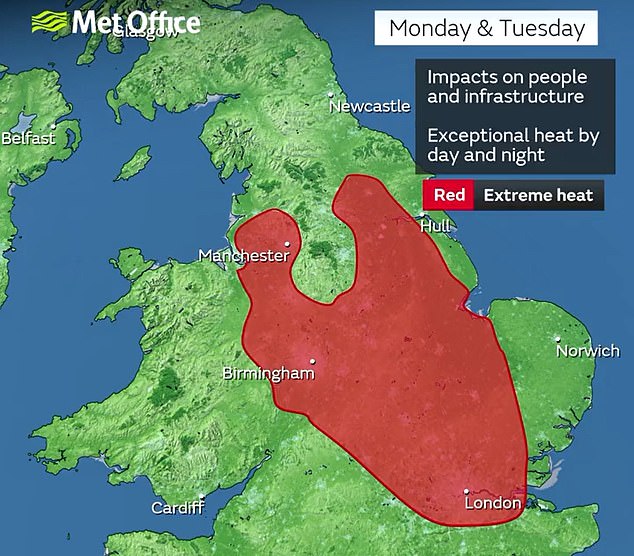 Train firms urge people not to travel amid heat

More than a dozen train companies are urging Britons not to travel today and tomorrow as the UK’s first red extreme heat warning comes into force.

A total of 21 operators – ranging from Transport for Wales and Gatwick Express to the Transpennine Express and Southern – said they will be running a slower service on Monday and Tuesday after National Rail implemented speed restrictions across its network.

Speed restrictions are used by train companies during periods of hot weather to avoid any damage being made to the tracks and to prevent rails from buckling.

Cancellations are also in place as temperatures are predicted to soar to highs of 38C and 40C in some parts of England. Amber and red extreme heat warnings have been implemented across the nation for the duration.

Those who have to travel are being encouraged to check their journeys on the National Rail website before setting off and taking water with them to stay hydrated.

Refunds are being offered to those who do not travel but have already purchased tickets.

LNER has said no trains are running from south of York and south of Leeds to London Kings Cross on Tuesday.

He told LBC: ‘We’re advising all our customers to only travel if their journey is essential, to make sure that they stay hydrated and carry water with them if they do have to travel. Check before they travel because journey times will be extended. We will have reduced services across the TFL network because of the safety restrictions we need to put in place due to the heat.’

Dr Renee Hoenderkamp, a GP at Christchurch Hall Surgery North London, tweeted that her daughter’s nursery cancelled a trip due to the weather.

She said: ‘I am not sure why she is any less safe there than at home.’

In response to a tweet from another parent who complained that their child’s nursery had closed, Dr Hoenderkamp said: ‘As a parent, who presumably needs to go to work, what on earth are you supposed to do.’

Dr Sarah Rutherford, head of an organisational culture consultancy, hit out at the ‘totally ridiculous’ decision that some schools are making to shut at midday over safety concerns.

She said it’s a signal of ‘increased Government control and further diminishing our own inherent sense of what’s best for us’.

One father took to Twitter to complain that his son’s school is closed, which is ‘not helpful to those parents who work’.

Another complained that ‘schools have started to take parents and their workplaces for granted’.

They wrote: ‘Thinking those who can work from home can just switch an office day to a home day. Doesn’t work like that. It can be very annoying.’

One Twitter user in London complained: ‘Some schools have closed early here but parents still have to work pure chaos.’

It comes after Steve Chalke, founder of Oasis, told The Times: ‘The decision to shut a school at any time has huge ramifications, economically and socially.

‘Many of our children’s homes are very small and hot’ so shutting schools would be ‘unbelievably irresponsible’, he argued. It would effect the poorest families the most because they are less able to work remotely and care for children at home.

‘It’s like lockdown — it was a class construct — you can’t work remotely if you are a cleaner or working in a supermarket.’

The scorching heat means the UK was warmer than Nassau in the Bahamas (32C), Kingston in Jamaica (33C), Malaga in Spain (28C), Athens in Greece (35C), Albufeira in Portugal (28C) and Dakhla in the Western Sahara (24C).

Despite the temperatures expected to continue to rise, health chiefs have insisted there is no public health reason to justify closing schools.

UK Government advisers believe school environments, which can have air conditioning, could actually be cooler.

There is no temperature threshold for closing schools or workplaces.

Comments from Mr Chalke, whose schools are mostly in the North of England, came after Dominic Raab, the deputy prime minister, said it was important children’s education should be maintained in the heatwave.

‘We’re coming to the end of the school term,’ he told Sky News on Sunday.

‘But I think making sure young children get the education they need is really important, particularly after the pandemic, and schools are well placed to do that.’

The Hereford Academy in Herefordshire is one school that has announced an earlier start and finish to their school day.

And in East London, Anna Feltham, the headteacher of Clapton Girls’ Academy, said on Friday of an early finish as school facilities will be unable to cope with the heat.

‘Already, many classrooms are very hot, even with fans, and students are struggling to keep cool, drink enough water and maintain concentration in lessons,’ she said.

‘Next week’s heatwave will make many teaching rooms unbearably hot by lesson two and five.

‘We have reviewed a number of options but do not have sufficient ‘cool’ rooms to re-room lessons into.’

Other schools across the country, while not closing their doors, are banning outdoor events and play, with PE lessons also scrapped to help children avoid overheating.

Government advice states children are more susceptible to high temperatures than adults because they do not sweat as much and so can be at greater risk of ill-health from heat.

While No10 has not gone as far as recommending schools shut their doors, they have advised that uniform restrictions should be relaxed to help children keep cool.

Other steps like leaving windows open overnight if possible and heat generating equipment like computers should be turned off when not in use.

Today parts of the country, like London, were predicted to hit 39C (102.2) but meteorologists said tomorrow has the highest chance of temperatures breaching the 40C (104F) mark.

Education is just one setting where the heatwave is wreaking havoc on Britain.

The Luton Airport runway was closed because of a ‘surface defect’ in the heat today. A Luton spokesman told MailOnline that engineers were called to site and repair works are in progress.

Meanwhile, Wales recorded its hottest day on record. The Met Office confirmed Hawarden in Flintshire had reached 37.1C (98.8F) this afternoon, exceeding the previous all-time high in Wales of 35.2C (95.4F) in the same location in 1990.

Trains were cancelled as the tracks start to buckle and GP surgeries have closed amid a serious warning that fit and healthy people could die for the heat.

Emergency services urged swimmers wanting to cool off to stay away from lakes and rivers in case they face difficulties.