Big UK high street names have started to debut their Christmas adverts and department store John Lewis’s offering is always hotly anticipated, mainly due to the adorable characters it has created such as Monty the Penguin and Moz the Monster.

However, this year some consumers don’t seem impressed with the high street chain, and some have suggested that they would need to ‘sell a kidney’ to be able to afford the piano advertised in the new campaign.

The retailer enlisted the help of Elton John to star in its 2018 Christmas ad. The story is set on Christmas day and shows a young Elton John receiving the gift of a piano. A £872 Yamaha Arius YDP-S34 Digital Piano, which John Lewis is now retailing. 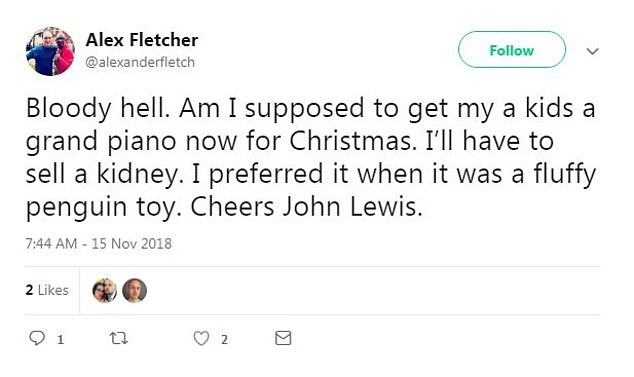 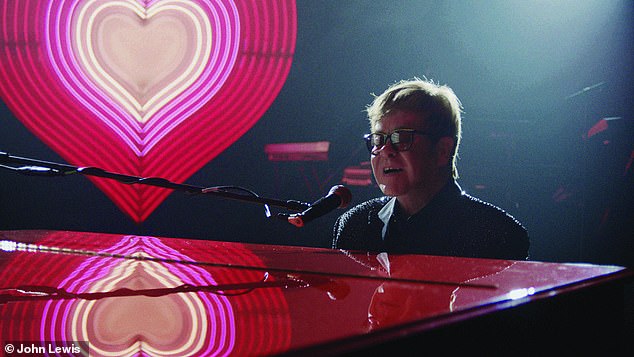 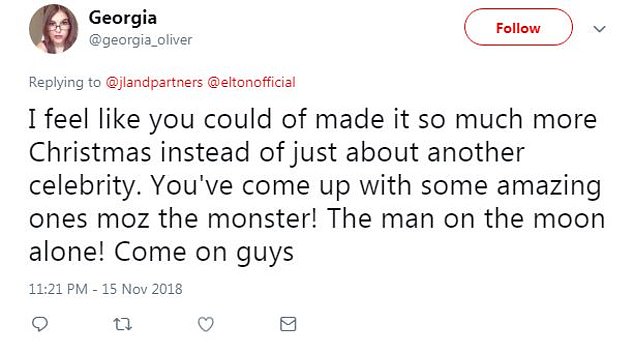 While some parents have said this might inspire others to purchase a meaningful gift for their child, others have lambasted the brand for advertising such an expensive present, which might be out of reach for many this Christmas.

One Twitter user, Alexander Fletcher said: ‘Bloody hell. Am I supposed to get my kids a grand piano now for Christmas. I’ll have to sell a kidney. I preferred it when it was a fluffy penguin toy. Cheers John Lewis.’

This is while ‘Nearly Festive Squid’ said: ‘I’m sure I’m missing the point about how I’m a s**** parent for not spending ££££, but how does John Lewis even sell upright pianos?’ 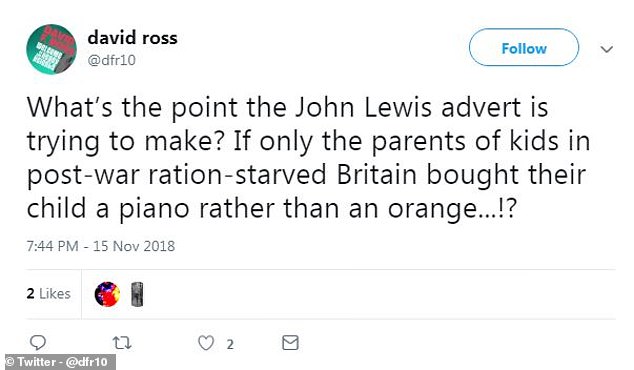 Some parents even took sides and pledged allegiance to supermarket chain Lidl who had also tweeted out their own version of the piano, with the tag line ‘It’s a Lidl bit funny’.

Christian Murray said: ‘Not liking the new John Lewis advert. Not every parent can afford a piano. @LidlUK for me this year.’ 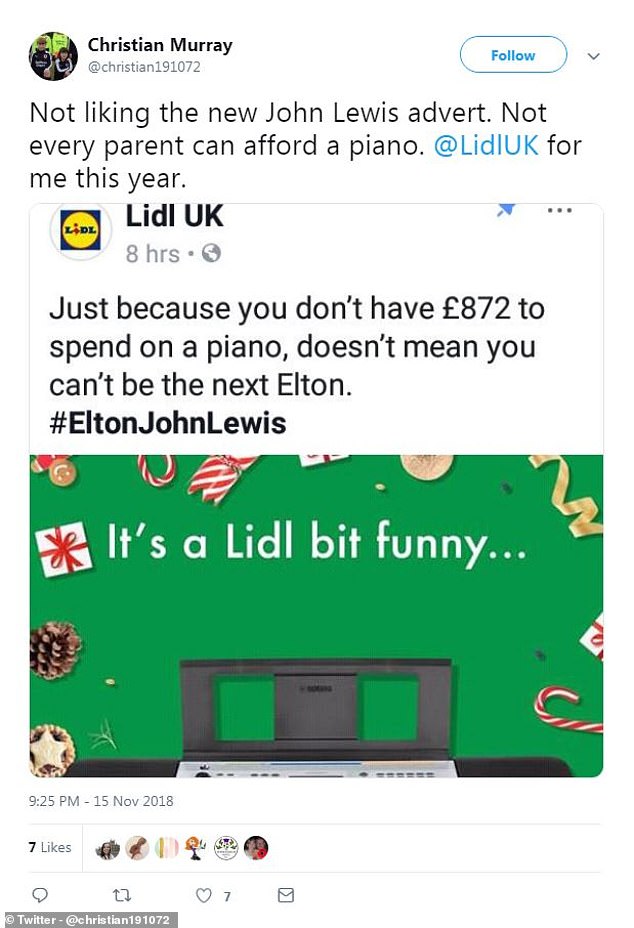 This is while others reflected on their childhood experiences of Christmas. One user ‘Radio Clash’ said: ‘That Elton John Lewis ad..this says it best. ‘The message this sends to me is if you don’t buy your kids something truly life changing (and expensive) you will ruin their hopes and dreams.’ Yeah speaking from a kid whose parents couldn’t afford lessons let alone a piano, grr.’

Mike Hall joked and said: Watching the new John Lewis Christmas advert it’s made me wonder if things would be different when I was a child if my parents had never gotten me a bontempi keyboard.’

John Lewis’s 2014 Christmas advert featured Monty the Penguin, the story was about the friendship of the penguin and the child. However Monty was a lonely penguin and missed his family so the young boy set out to help him find friendship. 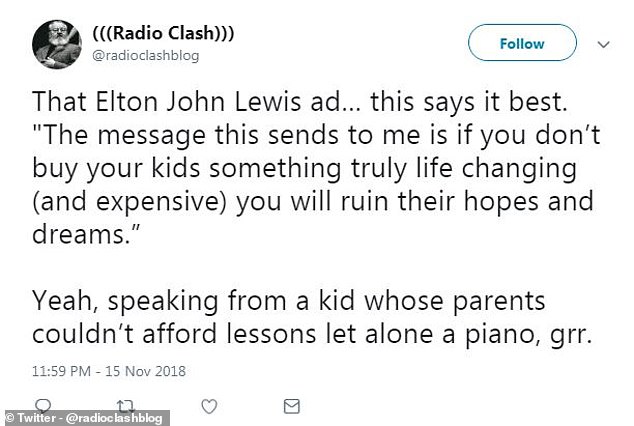 Another user felt the new advert sent out the wrong message to children, who now might expect big Christmas gifts 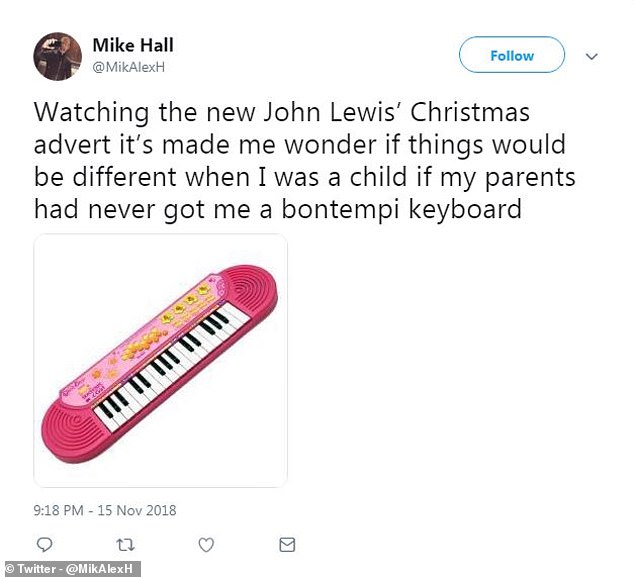 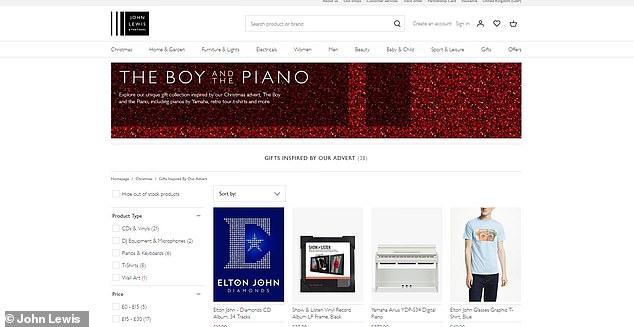 The advert struck a chord with both children and parents alike, however unlike the 2018 advert, parents could actually buy a whole host of Monty the Penguin merchandise and John Lewis had even created a Monty the Penguin themed rooftop garden on top of its flagship store in London.

Monty mania swept the country, a two-feet tall Monty was available for £95 – steep – but perhaps more reasonable than the £872 Elton John piano. However John Lewis also sold other size Monty toys which were priced at £12 and £35.

As well as this they had created a plush toy for Monty’s love interest Mabel, along with tote bags, socks, onesies, pyjamas, scarfs, tops and even cufflinks. 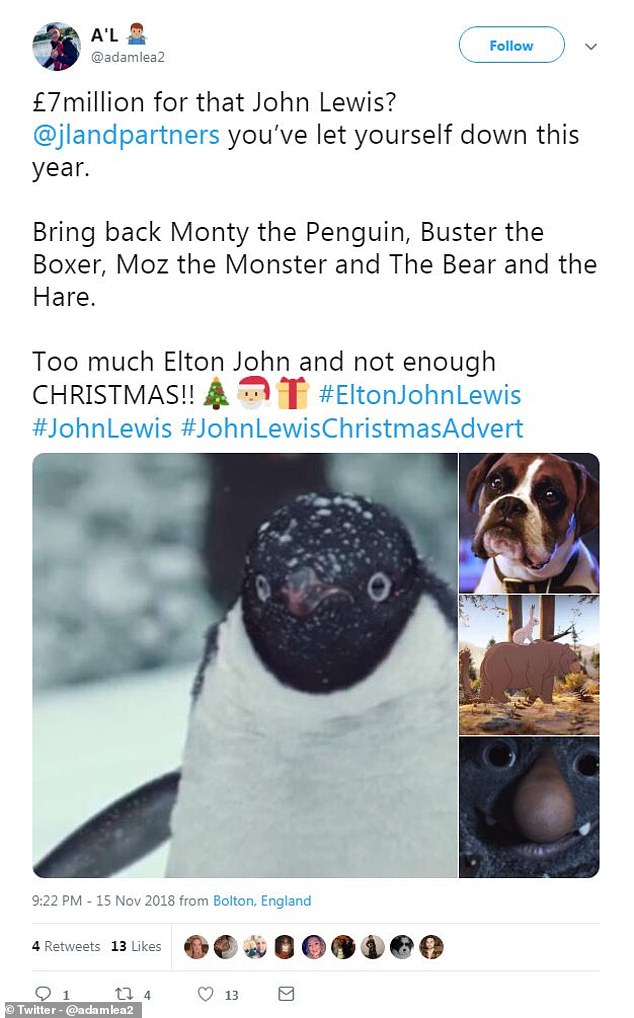 Another user, A’L said: ‘£7million for that John Lewis? you’ve let yourself down this year. Bring back Monty the Penguin, Buster the Boxer, Moz the Monster and The Bear and the Hare. Too much Elton John and not enough CHRISTMAS!!’

This is while Sarah Connor urged the retailer to: ‘Bring back Monty the penguin’. 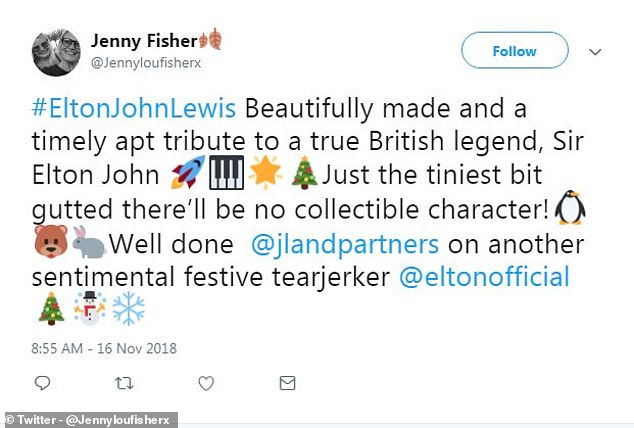 Another user ‘Witty Christmas Name Pending’ said: ‘Sorry but ‘meh’ is my reaction. It’s not a patch on the ‘bear and hare’ or ‘Monty the Penguin’ or ‘Buster the Boxer’ or the ‘man on the moon’. Unless you can buy your very own Elton John from John Lewis, then it’s just an advert for Elton.’

Sophie Holden added: ‘Am I the only one not impressed by the #EltonJohnLewis ad? I feel like the quality has been going consistently down hill since the penguin advert. Obviously the boy giving his parents a present is the best one.’

This year’s merchandise seems sparse. Aside from the pricey piano, fans of the advert can purchase items such as, Elton John T-shirts, which come in at £40, are only available for men and aren’t being retailed in children’s sizes.

Sarah Connor urged the retailer to bring back Monty the Penguin

Aside from that, John Lewis has created an ‘inspired by our Christmas advert’ range, which includes records by Elton John, vinyl players, portable electronic keyboards and even albums from artists such as Amy Winehouse and the Beatles.

There seems to be no items for children, whereas in recent years the products have been catered to the younger generations.

Many on social media have said that they also missed last year’s Moz the Monster advert, the advert starred a young boy named Joe who is freaked out to find a monster under his bed as Christmas is approaching. 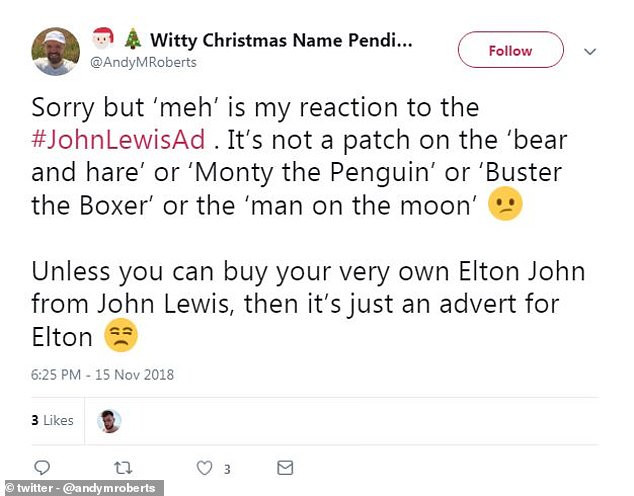 Soon, though, he befriends the creature, named Moz, and they start to play together at night, when Joe should be sleeping.

Many social media users have said the retailer should ‘bring back Moz the Monster’. Some said that the plush toy which was available for the character was more in reach than a £872 piano.

John Lewis, like with the Monty the Penguin range had created a whole Moz the Monster collection including soft toys, slippers and bedding. 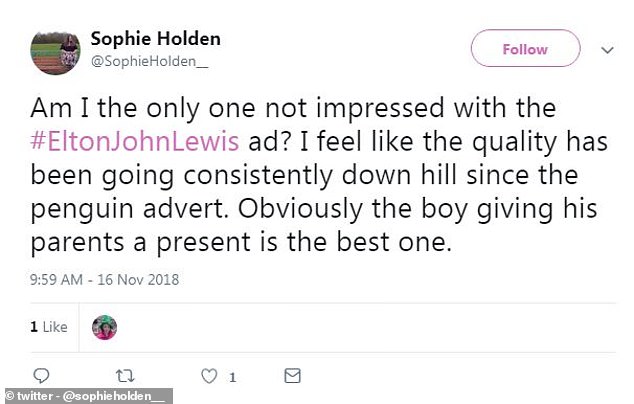 The store even transformed part of its children’s department at its Oxford Street branch into the house that Moz had lived in and had created a life size cuddly toy of the creature that children could cuddle and pose with.

Following the release of the Christmas ad, other brands poked fun at the advert and put their own spin on the production which was said to have cost up to £7 million to create.

Lidl posted a tweet with a picture of a £89.99 keyboard on a Christmas backdrop which read: ‘It’s a Lidl bit funny’. A joke clearly aimed as John Lewis, mimicking Elton’s John’s ‘Your Song’. 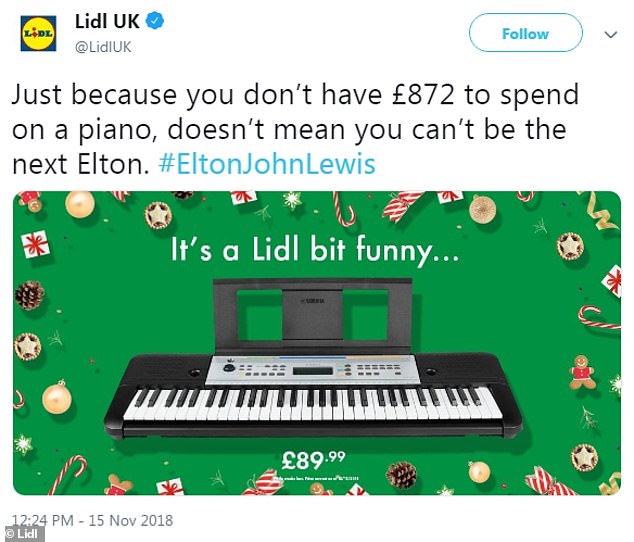 This is while smoothie and juice brand ‘Innocent’ posted a made up version of a conversation in the marketing department of John Lewis, it read:  JOHN LEWIS MARKETING DEPARTMENT Exec 1: ‘We start with modern day Elton playing piano.’

Exec 2: ‘He sings Your Song as we travel back through his life until…’ 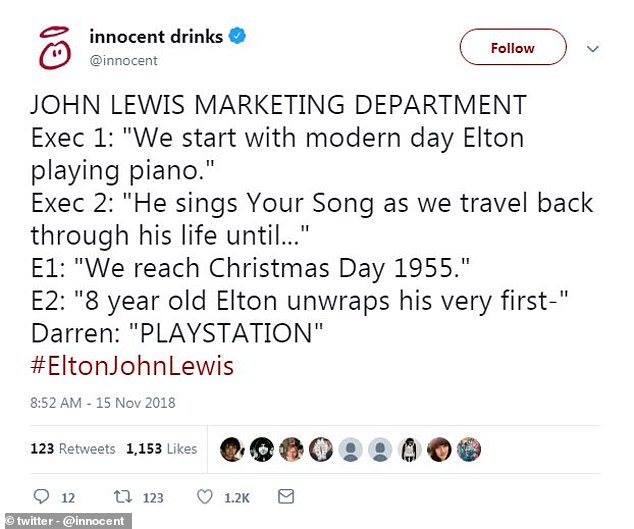