The parents of a victim of the contaminated blood scandal told an inquiry how their son died at the age of just seven in 1990 after being given blood products infected with HIV.

After Colin Smith was infected aged just two, the family home was vandalised, they lost their jobs and their other children were branded ‘the AIDS’ kids at school.

Parents Colin and Janet were told the devastating news of the infection in a hospital corridor.

They told the nationwide inquiry into the blood scandal they then suffered a barrage of abuse, from six-foot graffiti daubed on their home, hoax calls, to his father losing his job.

Mr and Mrs Smith, of Newport, Wales, also had to endure the terrifying AIDS awareness TV adverts that carried slogans such as ‘don’t die of ignorance’ and ‘AIDS is deadly’, reports the BBC.

They told the panel in Cardiff today: ‘We started getting ‘Aids – dead’ written on the house, not little letters, 6ft-high letters on the side of the house, crosses on the door, car vandalised.

‘People going across the street from us, threatening to take their children out of school if Colin went there, it was devastating.’

Mr Smith was sacked from his job after his son was diagnosed with HIV because his boss was scared it would mean they would lose customers.

He was considered ‘unemployable’, while his other three children were bullied at school and branded the ‘AIDS kids’.

Hearings are being held in Cardiff this week as part of the ongoing investigation into the UK blood contamination scandal.

At least 300 people in Wales were given deadly, life-limiting or chronic diseases, including HIV, AIDS and hepatitis, when they were given contaminated blood products during the 1970s and 1980s. 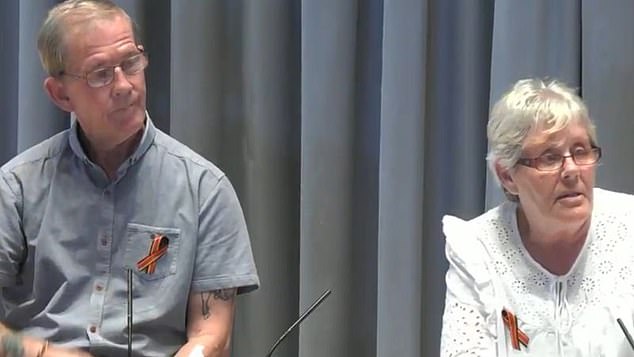 His parents Colin and Janet Smith (pictured today) told the nationwide inquiry into the blood scandal they suffered a barrage of abuse, from six-foot graffiti daubed on their home, hoax calls, to his father losing his job

The Smiths told the inquiry today: ‘We need justice’. They said they are ‘still angry’ about how their son died and believe he was used as part of a medical trial without their knowledge or consent.

Mrs Smith added: ‘We want people to make sure people know it was children taken away. It took lives, maimed people, crippled with such horrible things.

‘We need justice. We need something done about this. It’s just so wrong and I get really angry about it.

‘We feel maybe we’re getting somewhere for the first time in all these years.’