Parents of girl, 17, who was murdered by a serial killer will be able to keep living in their home

The parents of a 17-year-old girl who was murdered on her way home from school will be able to stay in their Frankston home after an investor bought it and agreed to let them stay.

Brian and Carmel Russell said it was ‘divine intervention’ that a kind-hearted person purchased the property, which they feared they might have to move out of.

The home is filled with treasured memories of their daughter Natalie, who was murdered by serial killer Paul Denyer in 1993.

Mr and Mrs Russell were the original owners of the property, but were forced to sell up after Mr Russell was diagnosed with cancer, which cost him his business and left them heavily in debt.

They sold it to their daughter and her husband, which allowed them to pay off their debts but stay in the house with their memories of Natalie.

But Brian’s son-in-law was recently diagnosed with prostate cancer, and needed to  settle his own debts, leaving Mr and Mrs Russell in limbo as to where they would live.

Mr Russell said he was over the moon at the sale, made by a young couple with three kids.

‘It’s really good, the people who are buying it just want it as an investment for their children,’ he said.

‘They said “as far as we are concerned you can stay as long as you like”, which for us is as long as we live.

The home was listed for $750,000 last month, and while multiple people expressed interest, real estate agent Ash Marton said only one buyer was able to guarantee Mr and Mrs Russell could continue to live in the residence for the foreseeable future. 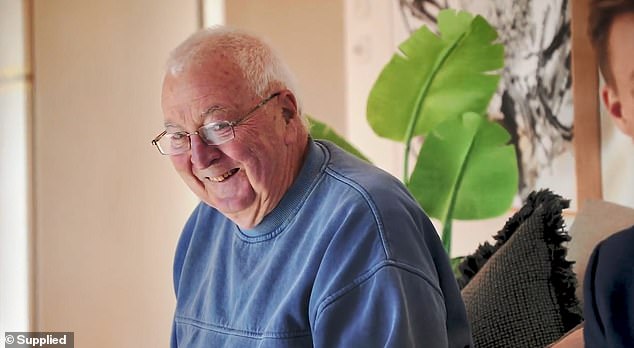 Brian Russell (pictured) said a string of good deeds from near-strangers had allowed the family to find a buyer who wanted the Frankston property as an investment, and was happy to let them continue living there 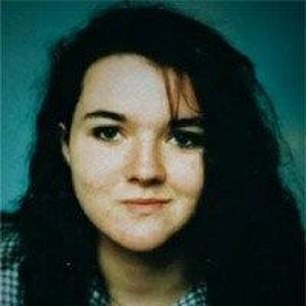 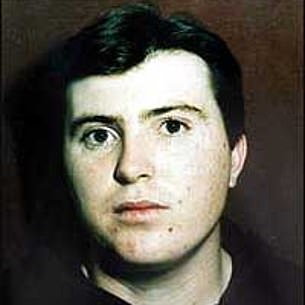 The home and suburb of Frankston holds all their fondest memories with their daughter Natalie, who was 17-years-old when she became the Frankston Serial Killer, Paul Denyer’s third and final victim in July 1993

Neither Brian or Carmel had wanted to leave the home, where a tree dedicated to their daughter Natalie stands proudly in the backyard, and they were reluctant to leave the town where the community supported them through their darkest moments.

Natalie, 17, was the third and final victim of Frankston serial killer Paul Denyer, who terrorised the suburb in 1993.

The Year 12 student had been walking home from school along a bicycle track she often used to run on when she was attacked. 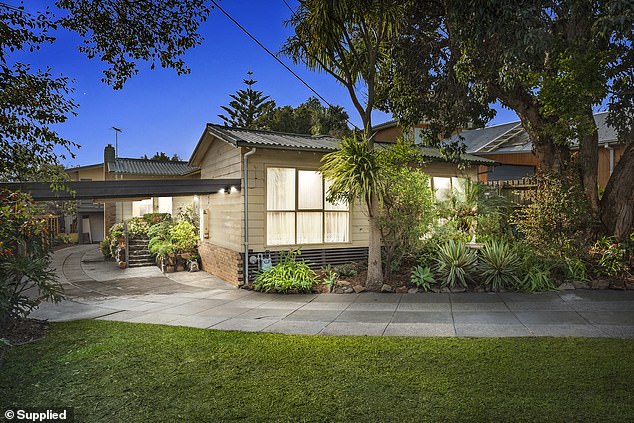 Brian and his wife Carmel are the original owners of the home (pictured) but were forced to sell to their daughter after Brian got cancer and was unable to work, leaving the couple in serious debt 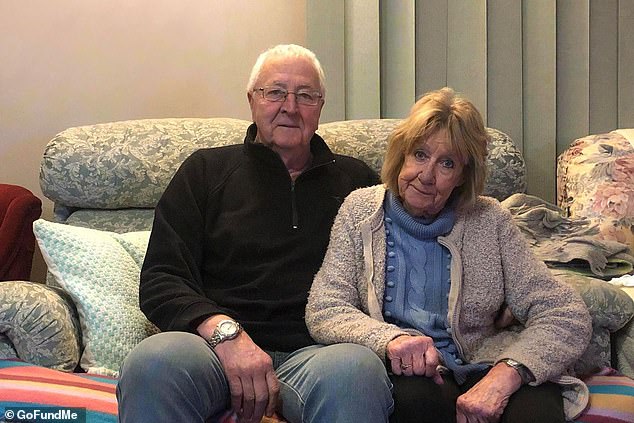 They had been renting the home back off their daughter and her husband, but the younger couple were also forced to sell after Mr Russell’s son-in-law was diagnosed with cancer as well

Every year, on the anniversary of her death, Natalie’s friends and family meet up on the track, which has been renamed in memory of the young woman.

‘Everybody brings some flowers, and there’s a little sign and a garden in the golf club [nearby],’ Mr Russell said.

‘We just walk from one end to the other, everyone says hello… some people we don’t see one year to the next but they turn up every time.’

The Frankston community have always been there for the Russell family, and showed their generous spirit again when they heard the couple might have to move.

Local businesses donated supplies, and residents picked up tools to help renovate the home and make it ready for sale.

Mr Marton launched a campaign specifically asking for a buyer with no interest in living in the home. 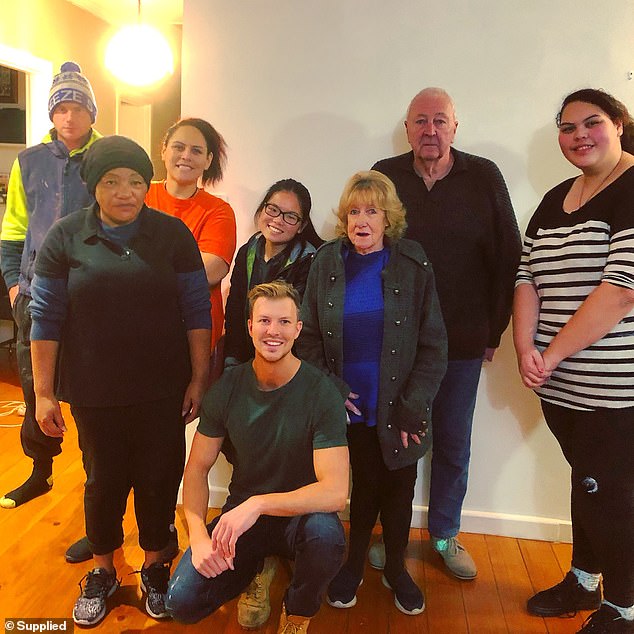 Mr and Mrs Russell (standing second from right) were approached by local real estate agent Ash Marton (centre), who launched a unique campaign to find an investor, and local community members (pictured) all pitched in to renovate the house, making it ready for sale

The agent also spent hours helping paint, garden and decorate to bring the tired house back to life, until it could finally be sold.

‘He might have been an angel with nothing to do and they sent him to us,’ Brian said.

‘He rang us out of the blue and said a lot of my friends and colleagues are giving me a hard time saying “you should be able to do something about this”.

‘He worked and worked – taught himself to do painting, he was out digging in the garden, he was marvelous.’ 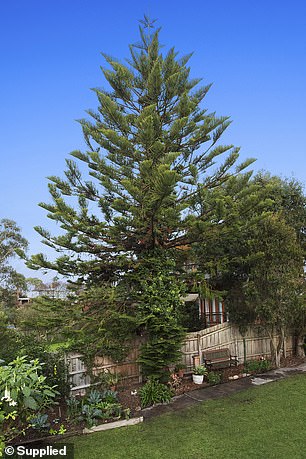 The home holds significance, as it is where Mr and Mrs Russell planted a pine tree (pictured) in memory of Natalie

Mr Marton said he was able to use social media and personal business contacts to rally troops from the local area who had expertise or even just good will, and were ready to work.

‘The owners needed a specific price, the tenancy needed to remain and the home needed to be transformed in order to give the family the best chance of securing the right buyer – one who would see value in the property and also be willing to consider a long term tenancy,’ he said.

‘I was simply blown away by the love, support and help we received.

‘This has been one of the most incredible experiences of my life and one that has reaffirmed my faith in the power of community.’

After the sale of the home, the Russells gifted Mr Marton a crystal mouse that belonged to Natalie as token of their thanks.

He said it now sits in his bedroom ‘as a little reminder to follow my intuition’. 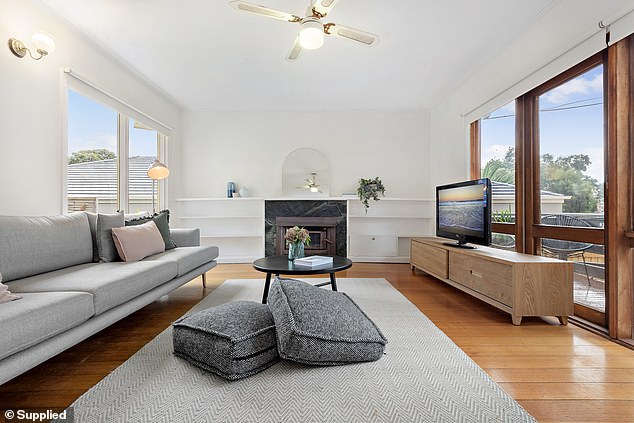 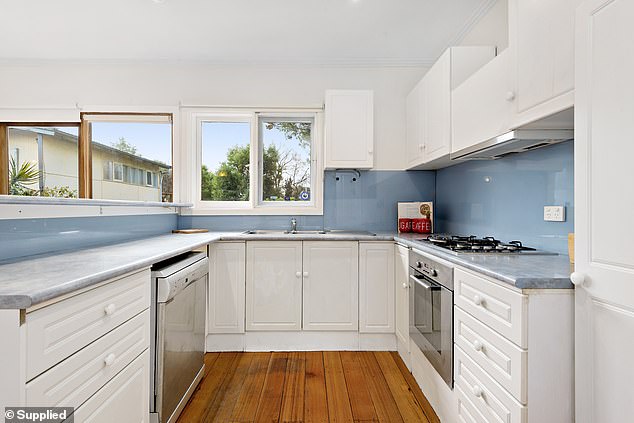 The tired home was given a fresh coat of paint and significant upgrades with donations of supplies from local businesses, and free handiwork from neighbouring residents (kitchen pictured)