Preston Cope, 15, was one of two students killed Tuesday in a shooting at Marshall County High School in Kentucky

A couple whose 15-year-old son was killed in a school shooting this week are thankful that they were at least able to say goodbye to their darling boy.

When Brian and Teresa Cope heard that there had been a shooting at their son Preston’s high school in Benton, Kentucky, the couple raced to the campus – passing cars and running red lights to get there as quickly as possible.

Their hopes of seeing their son uninjured were shattered the second Mr Cope peaked into an ambulance and saw a boy on a stretcher.

He instantly recognized the injured child as his own, based on the Nike socks the boy was wearing; he laid the same pair out for his son the night before.

Preston had been shot in the head and the hand by the unnamed 15-year-old gunman, and was waiting for a helicopter to transport him to Vanderbilt University Medical Center in Nashville, Tennessee.

His parents arrived with just enough time to say goodbye and tell him they loved him before he was whisked away. Tragically, Preston died en route to the hospital.

While the loss of their son is still raw, the couple are certain it was all in God’s plan because of how they were able to see Preston alive one last time. 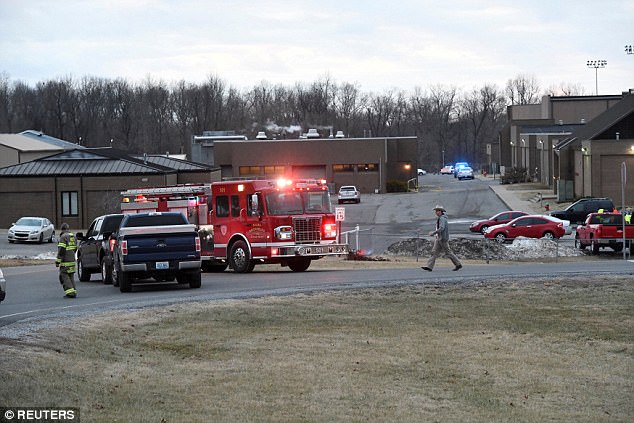 In an interview on Thursday, Preston’s parents told how they arrived at the scene of the shooting with just enough time to say goodbye to their son before he died. Above, a picture of the scene on Tuesday 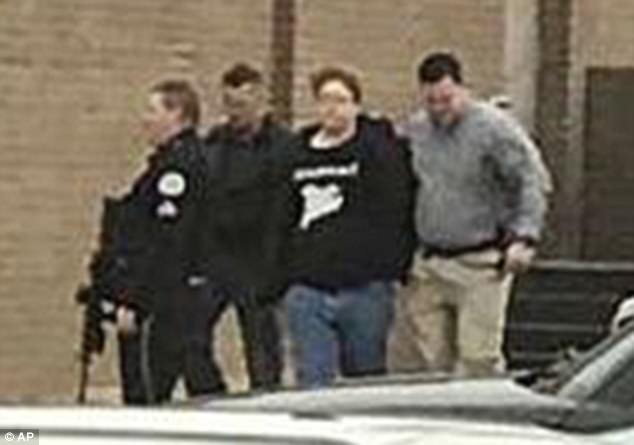 The unnamed shooter, second right, is pictured being led from the school after the shooting on Tuesday

‘There’s so many obstacles that could have prevented me from getting there. I could’ve been in a wreck, I could’ve had a flat tire, anything,’ Mr Cope said in an interview with the Courier Journal, published Thursday. ‘But I’m firm in my faith that God guided us safely through all of that to get us there, so we could speak to our baby and just let him know we loved him.’

The parents also believe God orchestrated some ‘good family time’ for them just days before Preston died, by bringing a snowstorm to the area which dumped more than 10 inches of snow and cancelled school for their kids.

Preston spent the snow days sledding and making an igloo with his 11-year-old brother Maddox, and warming up inside the house playing board games with his parents. 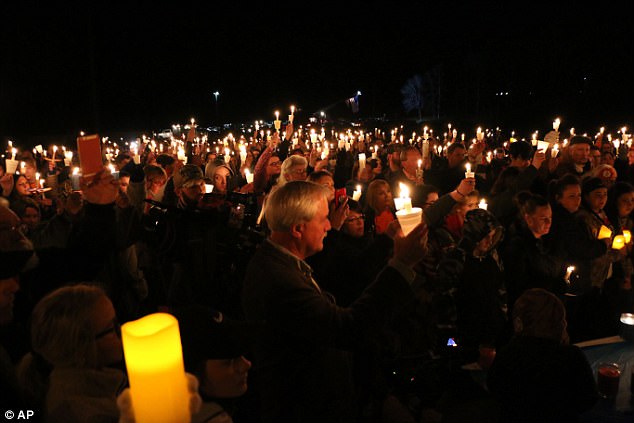 In addition to finding comfort in their faith, the family has been ‘overwhelmed’ by the outpouring of support they have received from people throughout the country.

‘We want to thank each and every person, from the East Coast to the West Coast, because we feel the prayers, we feel so much love, and the arms wrapped around (us),’ Cope said.

They have also been touched by the personal stories they’ve received about their son from those who went to school with him.

‘I knew him as my son and he acted kind of different around me – I’m kind of strict on my boys, but I love my boys,’ he said. ‘.. The outpouring of people telling stories about how much he was loved, it’s such a blessing.’

Mr and Mrs Cope said their son loved history, reading and baseball. He wasn’t quite sure what he wanted to be when he grew up yet, but he had thought about possibly becoming a meteorologist. 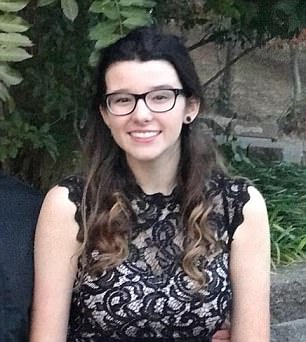 Preston was one of two victims in the shooting. The other was 15-year-old Bailey Holt (pictured)

The 15-year-old boy who carried out the shooting has yet to be named because he is a minor. But prosecutors have said they want to charge him as an adult. That decision will be up to a grand jury, which convenes on February 13 to decide whether to sign off on charges. If prosecutors get their way, the teen’s name will be released then.

‘Just senseless. It was just senseless,’ Mr Cope said. ‘To take a life, take these two lives, these families loved … And to take that away from us is so hard. It shouldn’t have happened.’

Preston was one of two Marshall County High students killed in the Tuesday attack. The other victim was fellow 15-year-old Bailey Holt.  In total, 16 students were shot and another seven injured fleeing from the gunman.

‘Pray for these kids that witnessed this, and their strength, what they endured that day. Enable them to live and go on through this,’ Preston’s mother said during the interview.

There will be a join visitation for Preston and Bailey on Saturday at the Reed Conder Memorial Gymnasium at the high school.

Bailey’s funeral will take place Sunday at 1pm, with Preston’s following at 3pm.