Determined parents are racing against the clock to raise $3.5million for a life-saving treatment for their 18-month-old daughter.

Kellee and Jamie Clarkson thought life was ‘perfect’ when they brought Wynter back to their Meringandan West home, 20km north of Toowoomba, Queensland, after she was born on August 21, 2018.

But as Wynter reached three months old, her mother, 29, and father, 30, noticed their little girl, who had been born ‘perfectly healthy’, was not reaching movement milestones like other children her age.

Kellee and husband Jamie are trying to raise $3.5million for a treatment that will extend their 18-month-old daughter’s life  (pictured together last year)

After researching illnesses online, Kellee became concerned her toddler’s symptoms ticked all the boxes for Spinal Muscular Atrophy type 1- a rare genetic condition with a life expectancy of no longer than two years.

When a doctor told Kellee it would take three months to see the local paediatrician, the Clarksons rushed to find their daughter an appointment in Brisbane the next day.

‘I didn’t tell him [of my suspicions], and within ten minutes he diagnosed her.

‘The first thing you think is, “Am I going to lose my child?”‘

‘Is my baby going to die? Why is this happening to us? Why does my child have this?’ 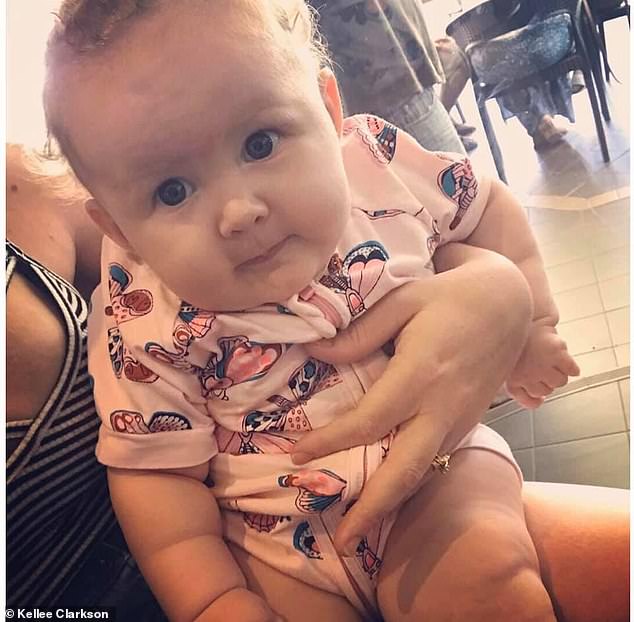 Wynter was born a ‘perfectly healthy baby’, but her parents became concerned when she was not rolling or kicking like others babies her age

‘We could not believe our life was so perfect when we had her and it just got shattered.’

Kellee, a registered nurse, and Jamie, an industrial electrician, dashed their daughter immediately to the hospital under the paediatrician’s orders for further testing. 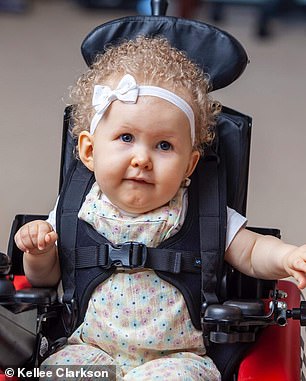 Wynter has Spinal Muscular Atrophy type 1, which makes it difficult for her to breath and use her muscles

One week later, doctors confirmed the heartbreaking news and Wynter began treatment the next day.

She was injected in the spine with Spinzara, then a new drug on the market, which has the potential to extend infants’ lives to between three to five years.

Wynter, who is unable to sit, crawl, walk, run or eat and sleeps with a ventilator to help her breathe, has already had six doses and will need one every four months for the rest of her life.

While the drug has massively improved Wynter’s use of her limbs, it is only a band-aid solution and does not treat the root cause of her disease.

In May 2019, Zolgensma, a non-invasive one-dose lifetime treatment, was released released into the US market, which replaces the function of the MSA sufferers’ faulty gene, preventing further degeneration.

Now the parents have five months to raise money for the ‘world’s most expensive drug’ to give Wynter the best chance of living beyond childhood. 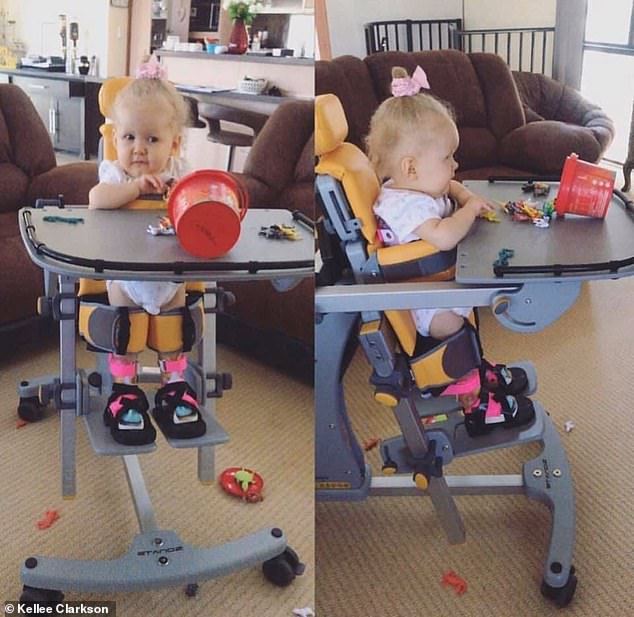 Since taking Spinzara, Wynter’s muscle mobility has increased, enabling her to lift her arms and sit up with assistance (pictured in her special high chair)

Zolgensma can only be given before her second birthday, and while the predicted life expectancy increase is still unknown, recipients are living longer and even walking.

The Clarksons have set up a GoFundMe campaign and Facebook page A Wish for Wynter.

Many local businesses have jumped on board to donate goods and services, including a clothes designer, a baker, a beauty therapist, and photographers.

From each waking moment, their thoughts are directed at what more they can do to raise funds, in hope of holding onto their child for as long as they can.

‘It has torn us apart. It has absolutely shattered us in ways that no one can understand unless they have been through it,’ Kellee said.

‘Your thoughts are just constantly like, how long will we have her?’ 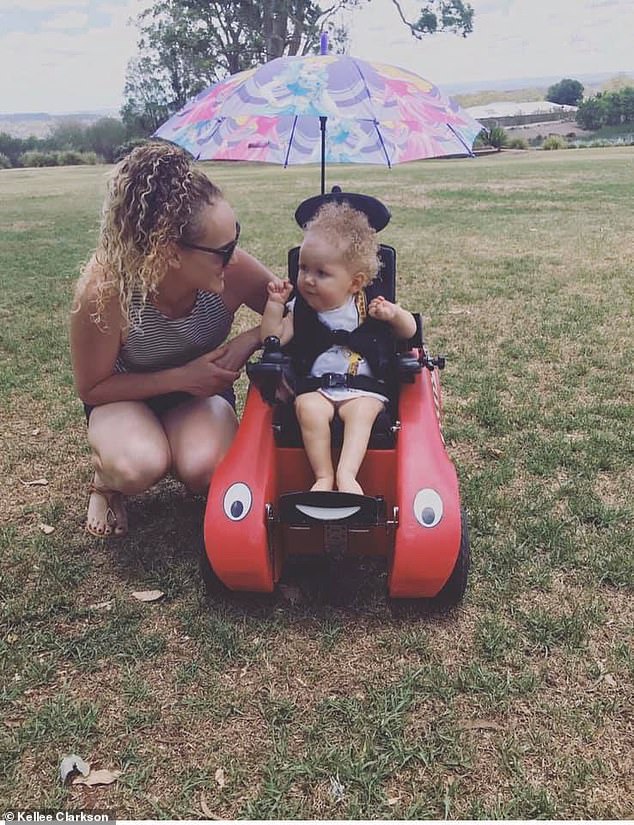 Kellee, who takes care of Wynter full-time, said her daughter is a ‘mummy’s girl’ and ‘dancing queen’

‘You are just constantly grieving for a child that’s alive.

‘Each day is about how can we make Wynter’s life as best as possible, which will in turn give us happiness. I’m not going to stop until it happens.’

The shocking diagnosis has left the family overwhelmed by emotional and financial stress and has completely changed their lives.

Because of the respiratory impacts of MSA, Wynter spent time in ICU last year recovering from a common cold.

Kellee stays at home full-time with Wynter, while Jamie works six to seven days a week between his main job and his own business on-the-side. 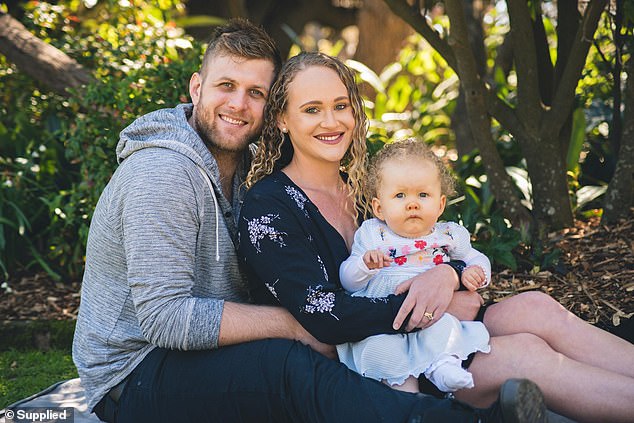 ‘It has been hard for us.

‘It [MSA] adds on so much more that you have to think about.’

‘Our family know they can’t touch her without cleaning their hands.

‘It’s not what we imagined we would be doing. When we do have time together we are under a lot of stress, so it is hard to enjoy time together as a family.’ 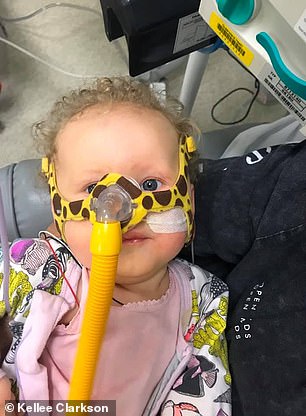 In another devastating blow, a heel prick to sensor the disease, which can be treated if it is discovered immediately, was being trialed in NSW and ACT -but not Queensland- the year Wynter was born.

The Clarksons have now been left to wonder how much better Wynter’s life would have been had they waited to have children or if she was born in those states- but then they would not have their little girl.

‘It seemed like it was perfect timing. Now we wonder if we had waited a couple of years later,’ Kellee said.

‘[But] she is the biggest blessing in our lives. She is the most special and happy little girl.

‘She is definitely a mummy’s girl. Always dancing -dancing queen to the max.

Although only one in 10,000 children have MSA, one in every 35 people carry the gene. If two carriers have a child, there is a 25 per cent chance it will have the disease.

The Clarksons are ‘frightened to death’ of having more children even though they had always wanted two.

Even with treatment, watching their baby girl go through the pain is ‘heartbreaking’, but they also feel guilty about Wynter growing up without a sibling.

Kellee said they have been overwhelmed by the support they have received and it was a big step for her and Jamie to ‘swallow’ their pride and ask for help. 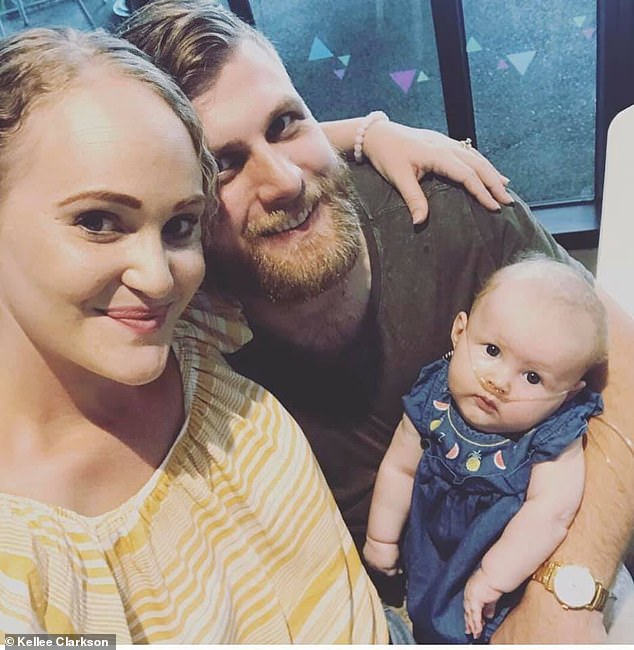 She many had reached out in the past week, not just financially, but to send them kind words which have ‘really meant a lot’.

Kellee said four other families have successfully raised funds for the treatment which inspired them to fight, and all of the children were doing exceptionally well.

‘It’s like looking into the future. It gives you a lot of hope to see children alive and doing well,’ she said.

‘Once we get this drug then I feel like we can really settle and try to enjoy life as a family. But until then we won’t rest.’

But with the countdown on, and a big price tag attached to Wynter’s longevity, the Clarksons are appealing for public help to get their daughter the treatment she needs.

‘We can’t do this alone. We have been doing this alone for six months. It hasn’t worked.

‘We are pouring our hearts out and asking for help.’

‘We need every bit of support we can get.’ 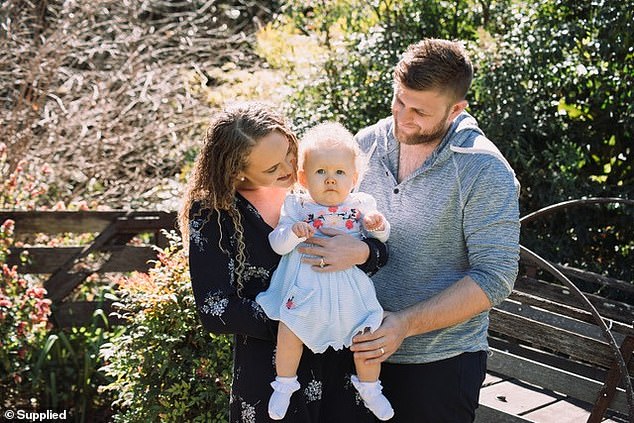 Kellee and Jamie have vowed to do everything it takes to get their daughter the $3.5million drug