Parents of missing university fresher, 18, cling to hope he may still be found alive

The family of a student who vanished a week ago won’t give up hope that he is alive after two men arrested for his murder were released without charge.

Thomas Jones, 18, has not been seen since the early hours of Wednesday September 19 after walking home along the River Severn after a night out in Worcester.

His parents, from nearby Bromsgrove, have revealed that witnesses have said Thomas may have been seen ‘looking dazed and asking for directions’ to the city centre earlier that day.

His mother Vicki said last night: ‘We’re going out of our minds. We are caught between trying to keep a sense of normality and the reality. It’s very difficult’. 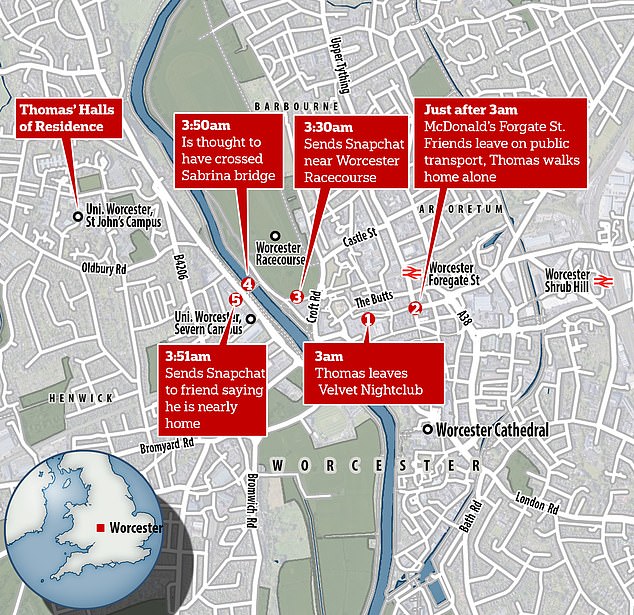 Thomas’ father Ian said one woman has told police she believes she saw his son at 2.20pm on the day he disappeared.

He told the BBC: ‘She said he had looked dazed and was asking for the city centre. He’s just disappeared’. 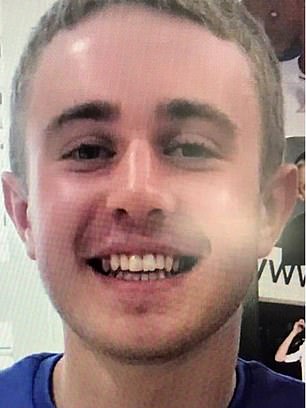 Thomas’ uncle Chris Rogers added: ‘Tom is a gentle boy, one of the loveliest you’d ever wish to meet’.

A friend told how Mr Jones – an aspiring teacher – had called him and sent a Snapchat video to friends from close to the River Severn as he walked back to his student accommodation from the nightclub.

Harley Hetherington, 18, who has known Mr Jones since they were nine and had been due to start on the same teaching course as him, said he had seemed ‘absolutely fine’ and ‘not intoxicated at all’.

She visited the scene close to a footbridge over the river with husband Ian, 53, as police and specialist divers continued to search the water next to the University of Worcester.

Police confirmed a second man had been arrested on suspicion or murder late on Sunday.

Another man, also aged 20, had been arrested earlier in the evening. Both were released without charge on Monday. 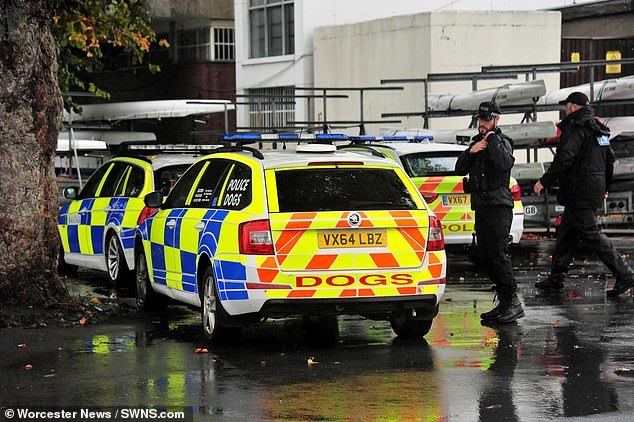 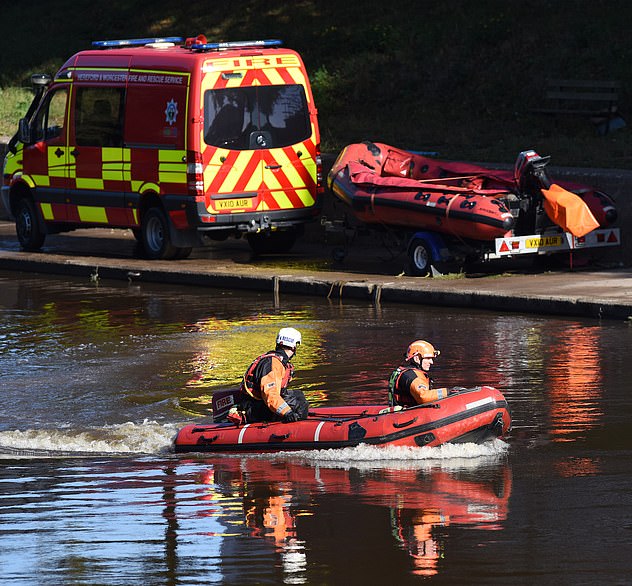 Mr Jones, originally from Bromsgrove, had only moved to Worcester on September 16 ahead of starting his primary school teaching course.

On Tuesday evening he watched a West Brom match with his father before going home and getting changed to go out at about 11.45pm.

Mr Hetherington, 18, said the last contact Thomas had with friends was a Snapchat photo of him standing on railings next to the river near Worcester Racecourse at 3.41am.

He is then said to have phoned his flatmate at 3.45am to tell him he was ‘two minutes away’ from his student accommodation. He had earlier called his mother at 3.30am to say he was home safe.

Mr Hetherington said: ‘The last call he made that I am aware of is to his flat mate at 3.45am to say he was almost home.

‘He had earlier phoned his mum to say he was home safe when he obviously wasn’t.

‘He did send a Snapchat, which showed a picture of him standing on some railings near Worcester Racecourse as he made his way home.

‘There was no caption on it, just a picture of him with his location, so that’s why the search has focused around that area. That was taken at 3.41am.’ Mr Hetherington, who lives in Worcester city centre, said: ‘I think he had gone out of his own on the night after watching the Baggies game with his dad. I reckon he thought he was going to bump into a few people he knew.

‘I saw him in the Velvet nightclub and he seemed absolutely fine. He was behaving normally and didn’t seemed intoxicated at all.

He added: ‘You can tell when somebody has had a few but Thomas wasn’t like that, there was no sign of drink or drugs and that’s what has baffled us all.

‘He was his usual bubbly self, looking forward to starting uni.

‘He knew Worcester city centre as we’d been out there before but he was new to the St John’s area of the city where his new halls of residence were.

‘Tom had phoned his mum and then his new flatmate to tell him he was two minutes away’ from home before he disappeared.

‘Nobody can quite understand how its happened. He was quite close to getting home safe and had told people he was fine right up until the point he went missing.’ More than 500 people turned out to help with searches on Sunday before being told to stand down when police announced his disappearance was being treated as a criminal investigation.

Mr Hetherington said: ‘It wasn’t the news we wanted to hear when the police said they have arrested two people – but we refuse to give up hope.’

He was wearing pale coloured jeans, a navy blue woollen zip-up Lacoste top and green shoes when he went missing.