The child safety charity set up by the parents of murdered schoolboy Daniel Morcombe has cut ties with the ‘Where’s William Tyrrell’ campaign.

Bruce Morcombe told Daily Mail Australia the charity he and wife Denise run – the Daniel Morcombe Foundation – and their ‘Keeping Kids Safe’ campaigns were ‘completely at arm’s length’ from Where’s William? – which is not a registered charity.

Concerned members of the public contacted the Morcombes about the link between the two organisations after police charged William’s foster parents with offences against a female child.

OSupporters of the Morcombe Foundation questioned the link after a senior detective told court William’s foster mother ‘knows where the missing toddler’s body is’ during her court hearing for the charge of lying to the NSW Crime Commission.

Following Magistrate Miranda Moody’s acquittal of her last month, William’s foster mother made a tearful plea outside the court, saying ‘Her Honour has … found me not guilty of lying to the crime commission.

‘With this behind me, I hope that police focus on finding William and what happened to him.’

The Daniel Morcombe Foundation informed inquirers it has not been connected with Where’s William ‘for some years. We do not fundraise or collect donations on their behalf’. 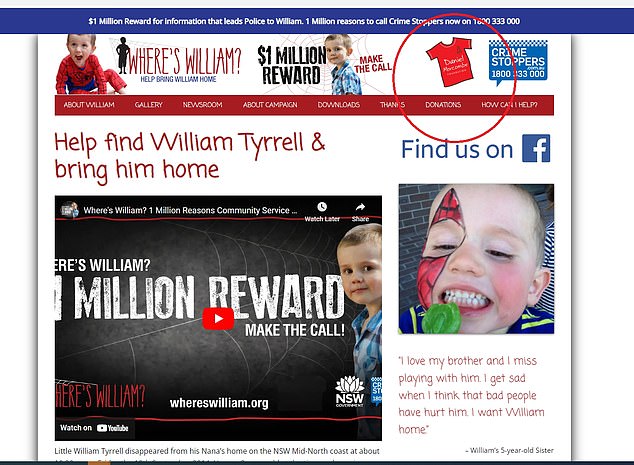 Bruce Morcombe said the Daniel Morcombe Foundation was ‘completely at arm’s length from the Where’s William? campaign and the Foundations says ‘our name and logo (circled) are still appearing on the “Where’s William” website … and we are endeavouring to get these removed’

‘I am aware our name and logo are still appearing on the “Where’s William” website … and we are endeavouring to get these removed,’ the email read.

‘However, as the Foundation does not own these platforms we do not have any direct access and are reliant on other parties  to action our requests.’

When asked about The Morcombe Foundation’s position, the person who runs Where’s William, PR supremo Claire Collins, said: ‘That’s news to me. I know absolutely nothing about what you have suggested.’

Mr Morcombe said the DMF had held monies on behalf of Where’s William in the past and still had $1500 ‘sitting on our books for two years’.

‘We have made contact over the last couple of months,’ he said.

In response to public concerns after police charges against the foster parents, he said: ‘I appreciate the air is very different today.’ 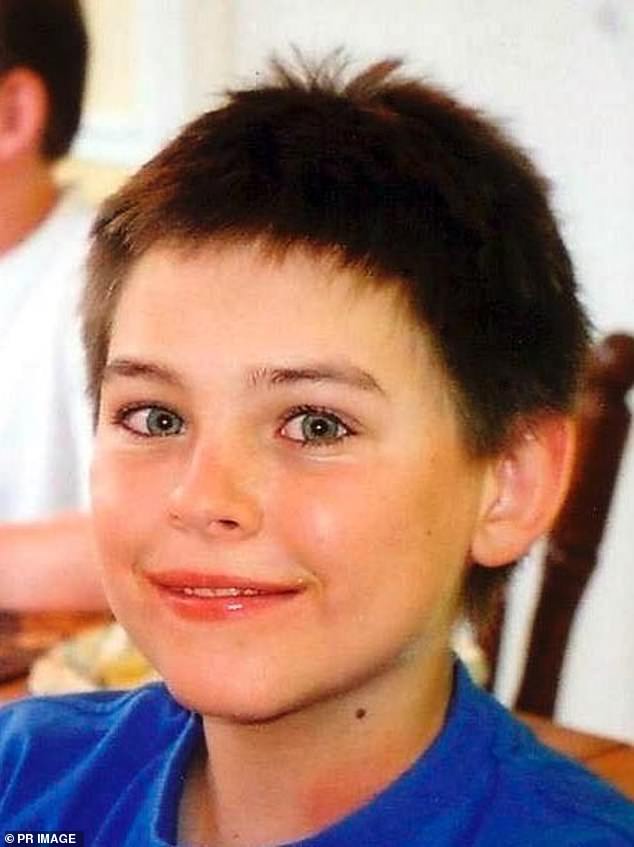 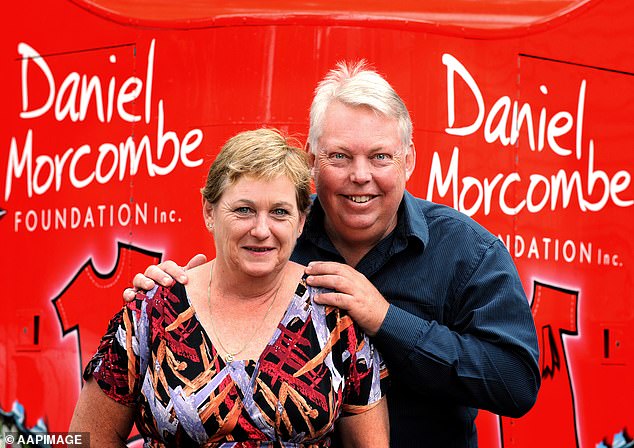 The Morcombes’ charity actively campaigns to educate children about staying safe in physical and online environments, and supports young victims of crime

Bruce and Denise Morcombe established their foundation after their 13-year-old son was abducted and murdered on Queensland’s Sunshine Coast in December 2003 while waiting for a bus.

Daniel’s partial remains and some clothing were found eight years later and paedophile Brett Peter Cowan was later convicted of  the boy’s murder.

The Daniel Morcombe Foundation campaigns to educate children about staying safe in physical and online environments, and supports young victims of crime.

William Tyrrell disappeared age three on September 12, 2014 from his foster grandmother’s house at Kendall on the NSW Mid North Coast and no trace of him has yet been found.

Where’s William? was established by Sydney mother-and-daughter public relations firm Insight Communications acting on behalf of William’s foster parents and launched by then detective Gary Jubelin with Hetty Johnson in 2015. 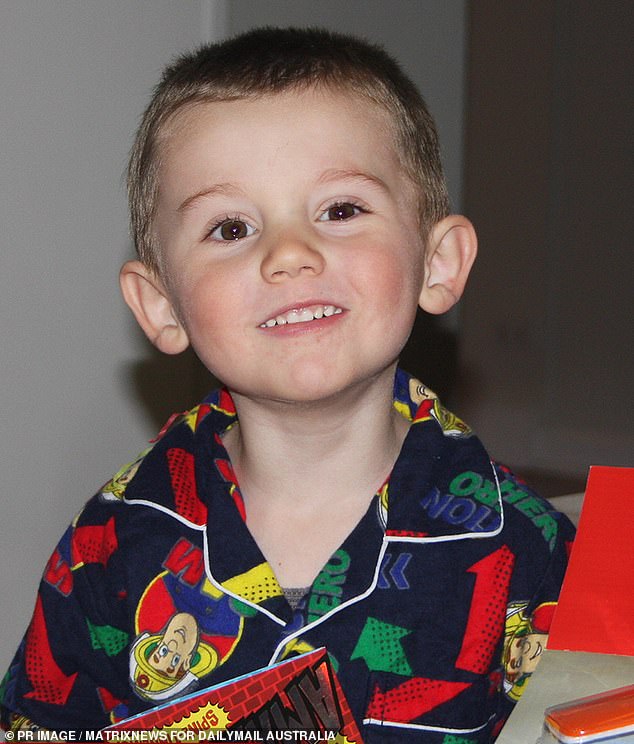 The Where’s William? campaign was set up to ‘manage public consciousness … and empower William’s (foster) parents as the foremost voice for William’ but has never been a registered charity 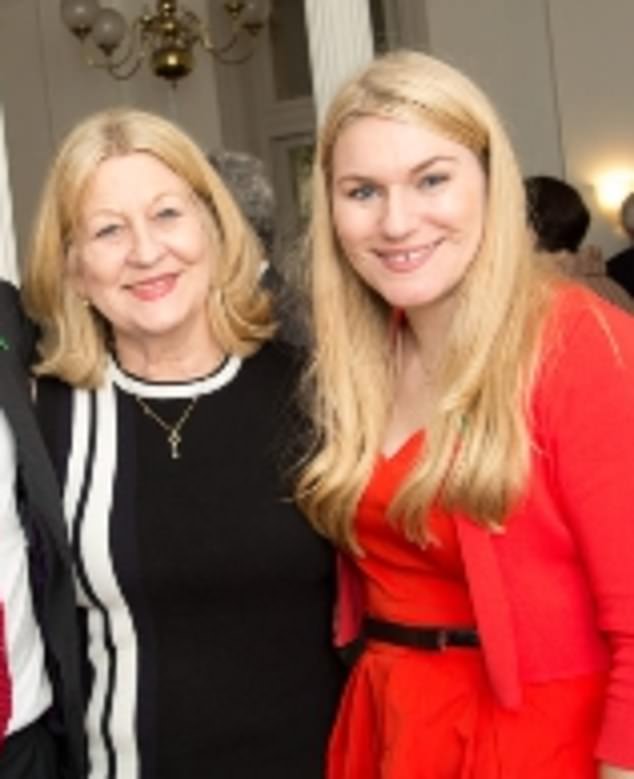 It was not publicly revealed until 2017 that William was a foster child who had been removed from his biological parents by the then Family and Community Services department.

Gary Jubelin left the NSW police force in 2019 and was later convicted for illegally recording a man now cleared of being a William Tyrrell suspect.

Via Where’s William?, Claire and Alice Collins from Insight PR sell T-shirts, caps and ribbons emblazoned with William’s image or in the colours of the SpiderMan suit he was wearing when he vanished.

The pair offered the merchandise outside the inquest into William’s death and have accompanied William’s foster mother in support to her court hearings. 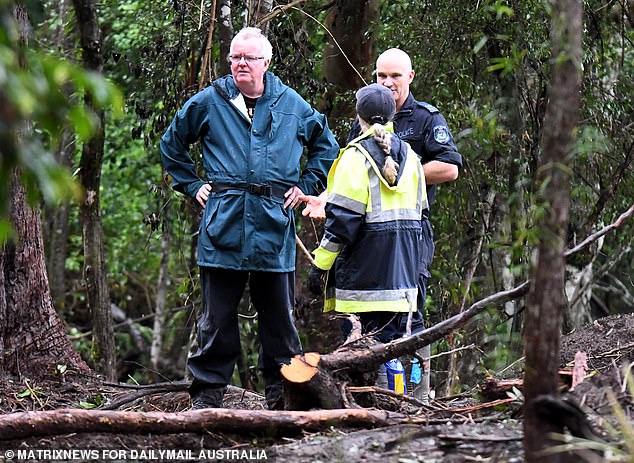 Where’s William? is not legally a charity, and cannot directly collect donations, but struck up an arrangement with the registered charities Bravehearts, and when that relationship collapsed, the Daniel Morcombe Foundation.

On its website, Insight notes it manages the Where’s William? campaign pro bono, and with no official spokesperson and yet in its first year had massive media coverage, online traffic and social media reach.

Claire Collins told Daily Mail Australia apart from not knowing anything about the Daniel Morcombe Foundation cutting ties with Where’s William?, that the campaign would not comment.

On June 26, 2015, Insight Communications stated the campaign would ‘manage public consciousness … and empower William’s parents as the foremost voice for William’ and the following year was boosted by a record $1m reward from the NSW Government. 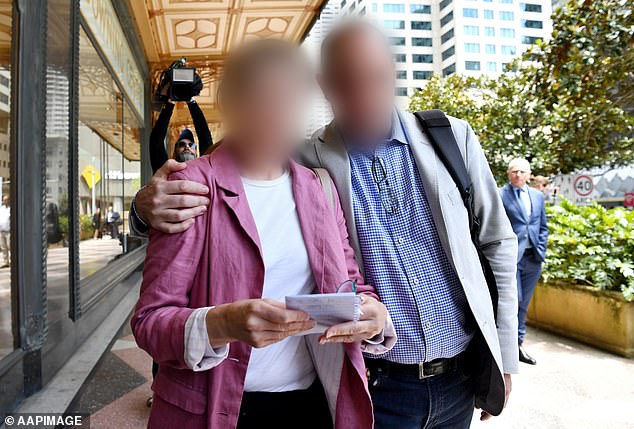 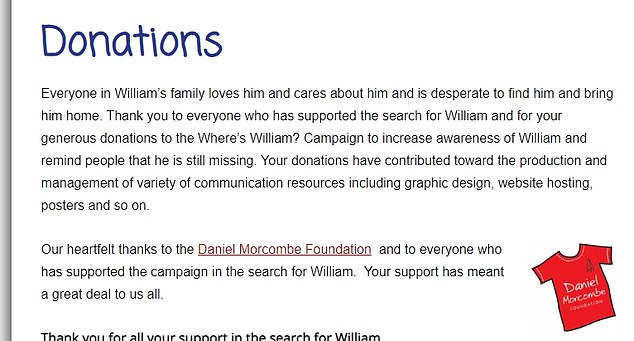 Despite Bruce Morcombe saying the foundation he and wife Denise run in the same of their son being ‘completely at arm’s length from the Where’s William campaign, the Tyrrell website still references the Morcombe charity and Claire Collins said the split was ‘news to me’ 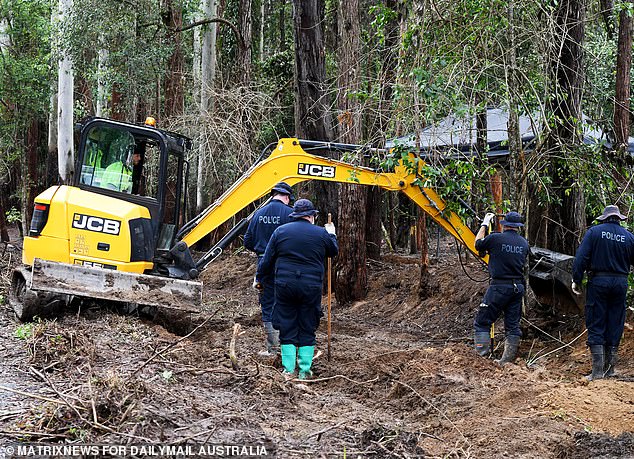 A senior detective told a court on November 3 he still believed William Tyrrell’s foster mother knew where the toddler’s remains were. Above, police search for remains at Kendall

‘The reason why we chose to go … partnering with a registered charity is we could have total transparency,’ she said.

‘After the partnership with Bravehearts ceased, there was a small amount of money over and we partnered with the Daniel Morcombe Foundation … the transfer was direct.’

They include two signed ‘William’s mummy’, saying ‘William needs the voice of many, his is silent’ and ‘I pray that someone will say something. It’s too big a secret to keep’.

The inquest into William’s disappearance by NSW Coroner Harriet Grahame is on hold as police continue to search for the missing boy’s remains.

A four-week search  at Kendall, and in particular along Batar Creek Road in the town, was conducted a year ago, and in July police again returned to search further. 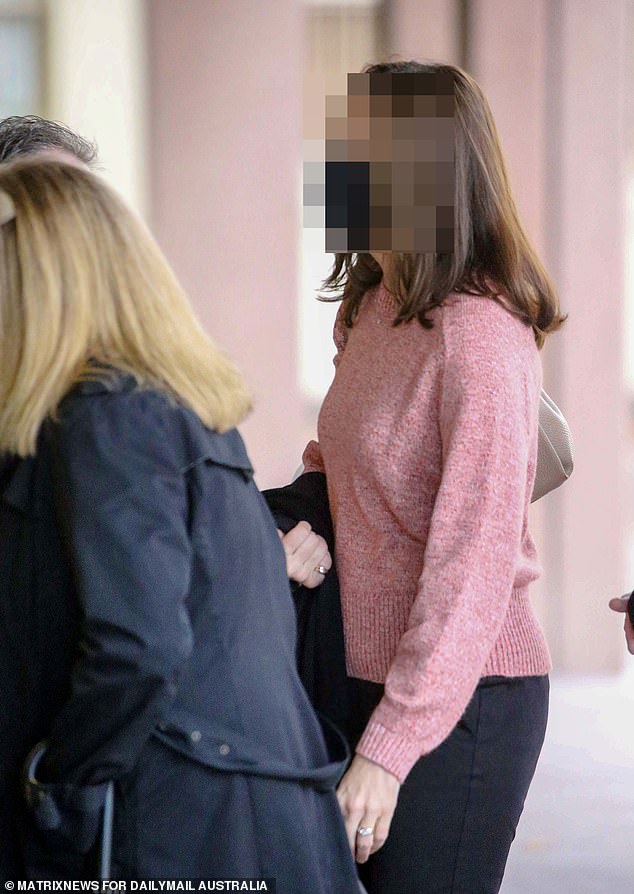 Where’s William? campaign chief Calire Collins has accompanied the missing toddler’s foster mother (above) to several court hearings and says the boy could still be alive 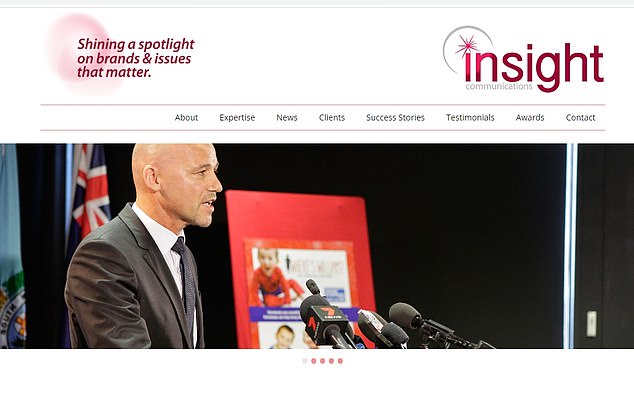 Where’s William? was set up by Claire Collins for the foster parents and launched by then detective Gary Jubelin who was taken off the case and left the police force in 2019 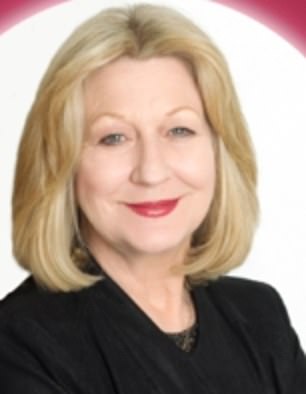 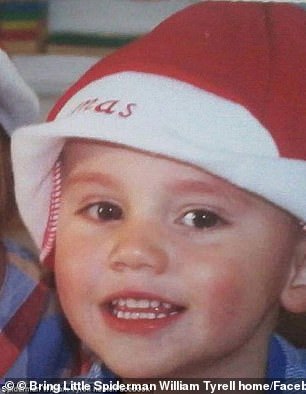 On the eve of last year’s search, senior police named William’s foster mother as a person of interest in the case.

The 57-year-old has always denied any connection to the boy’s disappearance, including to the NSW Crime Commission, and no charges against anyone have been laid.

In the last year, NSW Police have charged William’s foster mother with two charges of assaulting and two of intimidating a ten-year-girl in a family home, which are due to be heard in January.

He is also charged with lying to the NSW Crime Commission.

On November 4, NSW Magistrate Miranda Moody found the foster mother did not lie to the Crime Commission about hitting a female foster child with a wooden spoon.