The parents of a water skiing six-month-old who faced brutal backlash after video of their daredevil son went viral have spoken out to defend the stunt, insisting that they took every precaution possible to protect the youngster.

Casey and Mindi Humpherys, from Utah, sparked a bitter debate on Instagram over the weekend when a clip of their six-month-old son Rich water skiing across Lake Powell was slammed by critics, who accused the couple of endangering their child in order to achieve online fame.

But in a new interview with GMA, the parents hit back at the suggestion that their son was ever at risk while out on the water, revealing that they had a boat of 12 people – including doctors – on-hand in case of an emergency, and insisting that they had obtained the go-ahead from their son’s pediatrician before even trying the stunt.

Speaking out: The parents of six-month-old water skier Rich Humpherys have spoken out to defend their son’s hobby after facing brutal criticism online 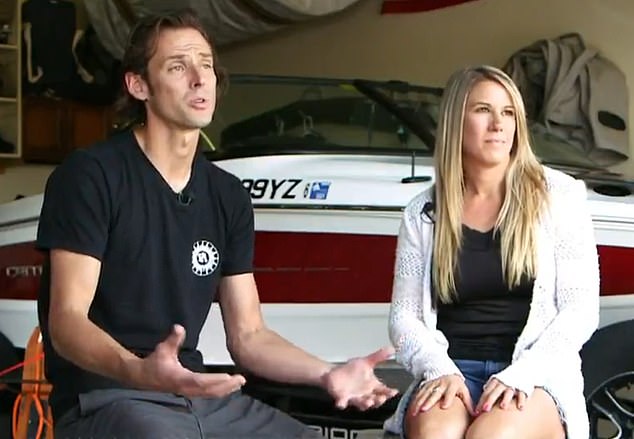 Safety first! Casey, 36, and his wife Mindi, 33, from Utah, insisted that they took every precaution before allowing their son to try water skiing for the first time

‘We had a separate boat out there, [and there were] roughly 10 or 12 people involved in total [including] a couple of doctors and nurse on board the boat,’ dad Casey, 36, explained, while revealing that the boat Rich was water skiing behind was only going five miles per hour.

He added that he and wife Mindi, 33, had a special training board made for their son to use out on the water, and that they gave him plenty of opportunity to try it out at home before putting him on the lake.

They also signed their son up for infant swimming lessons before allowing him to try water skiing to ensure that he was totally safe and sound – not that they were ever worried about his abilities.

‘He has never fallen off. When we put him on the board and he was right at home on it,’ Casey said.

His wife chimed in: ‘We talked to his pediatrician and before we water skied, he was super impressed with how far along Rich is. He’s really well developed for his age. [The pediatrician] said it was fine and to not worry about it.’

The couple faced brutal criticism after sharing video of Rich’s water skiing debut – which they say as earned him the unofficial world record title of youngest ever water skier – with some Instagram users accusing them of ‘endangering’ their son, branding Casey and Mindi ‘reckless’ and ‘terrible’. 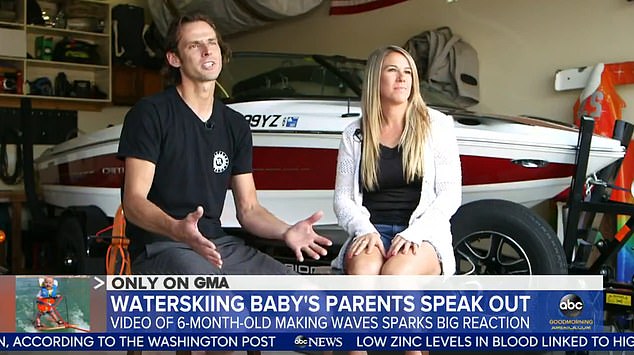 Important: The couple said that they made sure to check with Rich’s pediatrician whether it was OK for Rich to try water skiing at such a young age 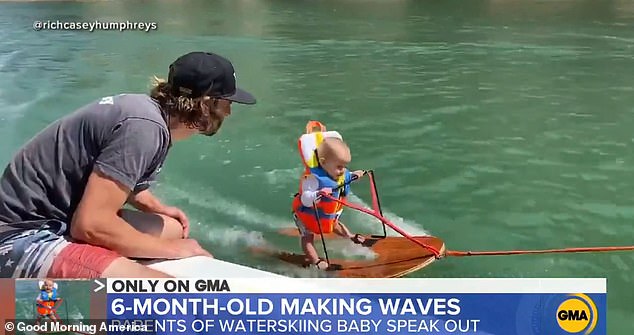 Success! According to his parents, Rich’s water skiing session has earned him the unofficial world record title of youngest ever water skier 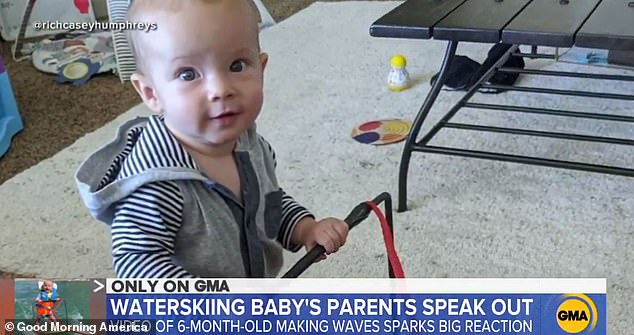 Training: Before allowing him out onto the water, the parents got their son to practice with his special board at home on dry land

Some even insisted that the stunt could cause permanent damage to his limbs.

‘I hope endangering your child is worth it for the clout!’ one person commented on Instagram.

‘His poor little joints aren’t even fully developed yet, that’s why he’s not walking yet. If he can’t walk, do you really think this kind of stress is good for his body? Also look up dry drowning. You are terrible parents.’

Others accused Mindi and Casey of ‘child abuse’, while some branded the couple ‘reckless’ and ‘stupid’ in the comments.

Some even suggested that the parents had put their child in danger in order to gain fame online, with one branding them ‘self absorbed’ while another said: ‘This is what happens when people need attention and bring their newborn into it.’

However, despite the vitriolic backlash, Casey says he and Mindi refused to let the criticism upset them, noting that he understands the majority of the negative comments came from a well-meaning place. 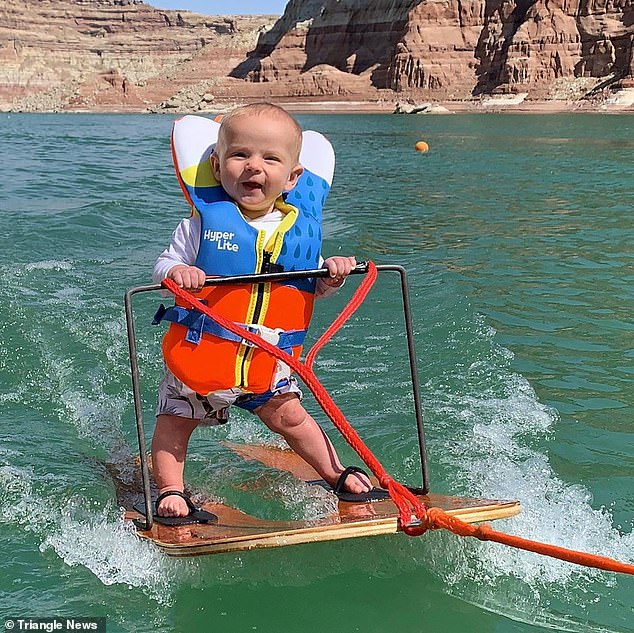 Little daredevil! After Casey and Mindi shared video of their son water skiing, they faced a slew of criticism on Instagram, with some branding them ‘reckless’ and ‘terrible parents’ 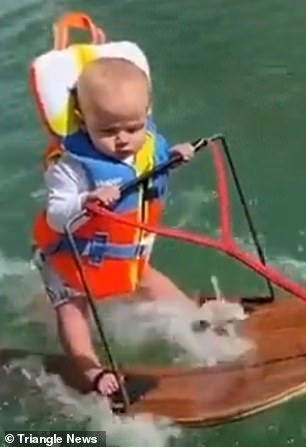 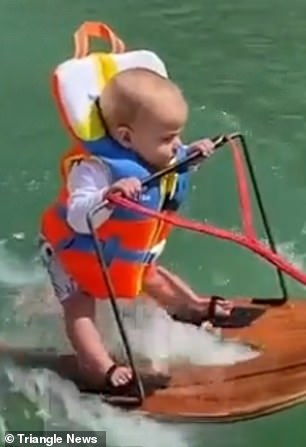 Upset: Others accused the Utah couple of ‘endangering’ their son with the stunt, and others warned that water skiing could cause permanent damage to his limbs

‘I really feel like the majority of criticism comes from people caring and people just being concerned and wanting the best for our child, so honestly we appreciate that,’ he shared.

The proud dad added that he and Mindi remain incredibly excited by their son’s impressive accomplishment, and won’t let any online negativity taint that.

‘Whether you agree with what we’ve done for Rich and what he’s accomplished or not, you can understand how exciting it is to see your child accomplish something,’ Casey concluded.

The online lectures that the parents faced are not totally unfounded however; the American Academy of Pediatrics warns that infants can drown within mere seconds because of their underdeveloped neck and muscle control, and advises that there should also be someone within arm’s distance of a baby whenever it is near water.

Casey and Mindi’s decision to speak out comes days after their video of Rich first went viral after being shared on Instagram by Barstool Sports.

In the clip, baby Rich can be seen wearing a lifejacket while standing atop a ski trainer – a wooden board with two long ski-like sections – with his feet strapped to the equipment and his little hands holding onto a safety bar in front of him.

The youngster is being pulled along by a boat that is out of the shot, while his dad Casey rides alongside him in another vessel, cheering Rich on as he makes his way across the water. 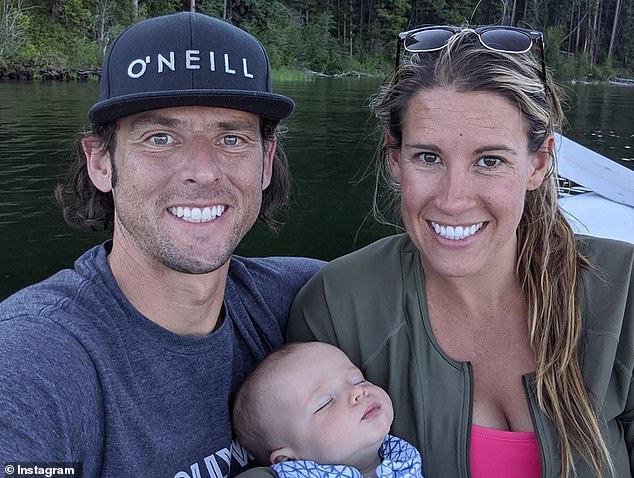 Up and at ’em! The Humpherys family regularly use their Instagram pages to document their outdoorsy adventures including horse riding and dirt biking 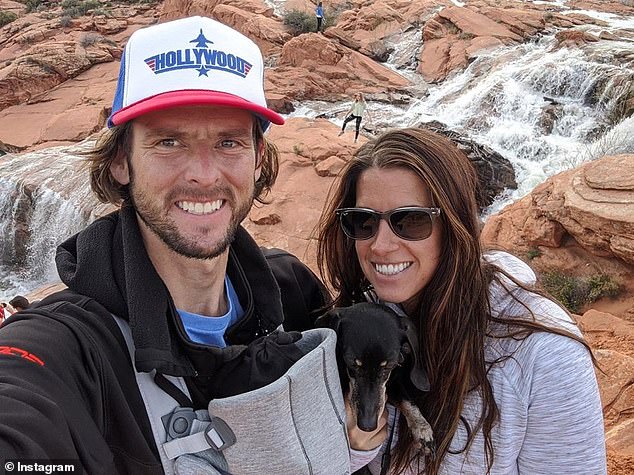 Debate: Despite the upset, some praised Rich’s skills, and congratulated the youngster on his world record attempt 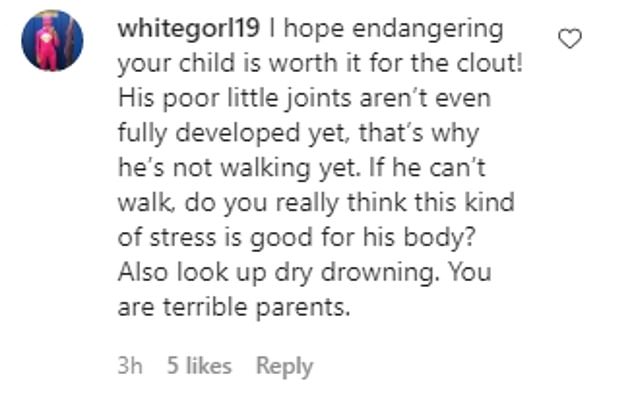 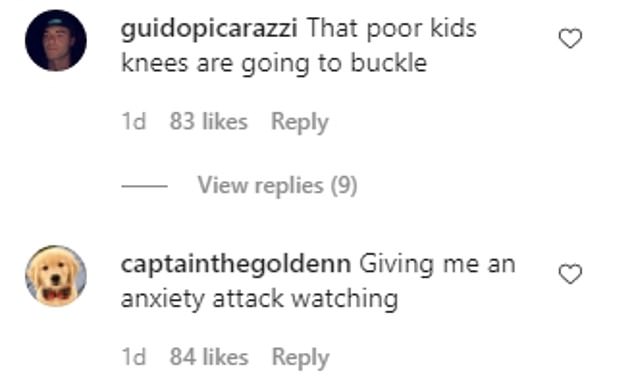 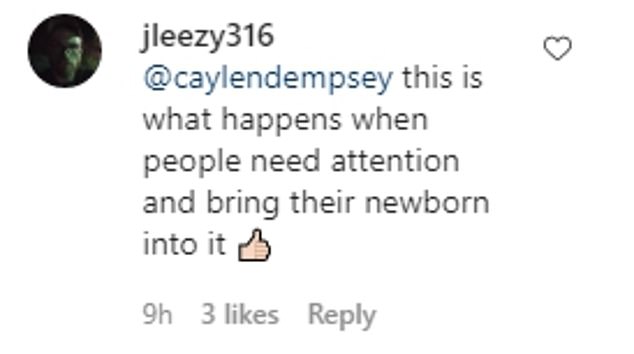 Backlash: Dozens of people commented on the couple’s video to accuse them of ‘endangering’ their son, while others suggested they were using Rich to gain a following online

Dad Casey also shared the clip, saying: ‘Six months four days. Take one look at this kid and tell me he isn’t having the time of his life! Such a little stud.’

Despite the brutal criticism, some were incredibly supportive of the couple and their brave young boy, who was praised for his ‘boss’-like attitude and impressive skills.

‘The fact that he doesn’t even looks fazed makes him even more of a boss,’ one person commented after the video was shared by Barstool Sports.

Before Rich’s world record attempt, the title was held by Zyla St Onge, who rode along Lake Silver in Florida in May 2016, aged six months and 27 days – making her 23 days older at the time than the Utah youngster.

The Humpherys family use their Instagram pages to document their adventures including horse riding, dirt biking and now, world record breaking water skiing.