Parents reveal their grossest experiences with their kids

Being a parent is one of life’s biggest goals for many people – but as some mothers and fathers have revealed, it can also end up being one of the messiest, grossest things a person can ever do.

In a series of candid confessions, moms and dads detailed a series of rather unpleasant experiences that they have had while parenting their young kids, sharing stories about everything from vomit and poop, to the less-than-enjoyable hygienic processes every parent has to partake in.

One mother, for example, revealed that she uses ‘a Swedish gadget’ called a NoseFrida in order to ‘suck the snot out of my baby’s stuffy nose’.

Shocking: Parents anonymously shared their grossest stories about raising kids with in response to a survey about moms and dads using their T-shirts as tissues (file photo used)

She also noted that many parents will ‘clean’ their baby’s pacifier when it falls to the ground simply by putting it in their own mouths before passing it back to their child.

One dad and one mother both admitted that they had seen their children vomit directly into the mouth of their other half.

‘My daughter vomited straight into my husband’s mouth,’ the woman revealed, while the man said: ‘The little one threw up in my wife’s mouth. It was pretty gross.’

He added: ‘She has also projectile pooped across the room, hitting my leg, and then the wall behind me.’

One woman, who has yet to have children herself, shared a rather horrendous encounter she had with her young nephew.

‘My nephew came up to me with a sweet smile on his face,’ she said. ‘He said he had a surprise for me and that I should stick out my hands and close my eyes.

‘Like an idiot, I followed his instructions. Having shut my eyes, he promptly licked my hands and dropped a poop into them. It was one of the most awful experiences I have had.’

Another more detailed poop story came from one mother, who revealed the incredibly unpleasant result of her daughter moving on to solid food for the first time.

‘My poor daughter been constipated for a week once she started eating solids,’ she explained. ‘It was really getting the whole family down because she would look so uncomfortable trying to poop.

‘I was changing her wet nappy towards the end of constipation week and all of a sudden I noticed a little bit of poop coming out.

‘I’m still not sure why I did this but I grabbed that poop with my bare hand and started to help pull it out of her. It finally came out in my palm, it was massive and she was back to her normal self after passing that big log.

‘I literally pulled s***t out of my daughters butt.’ 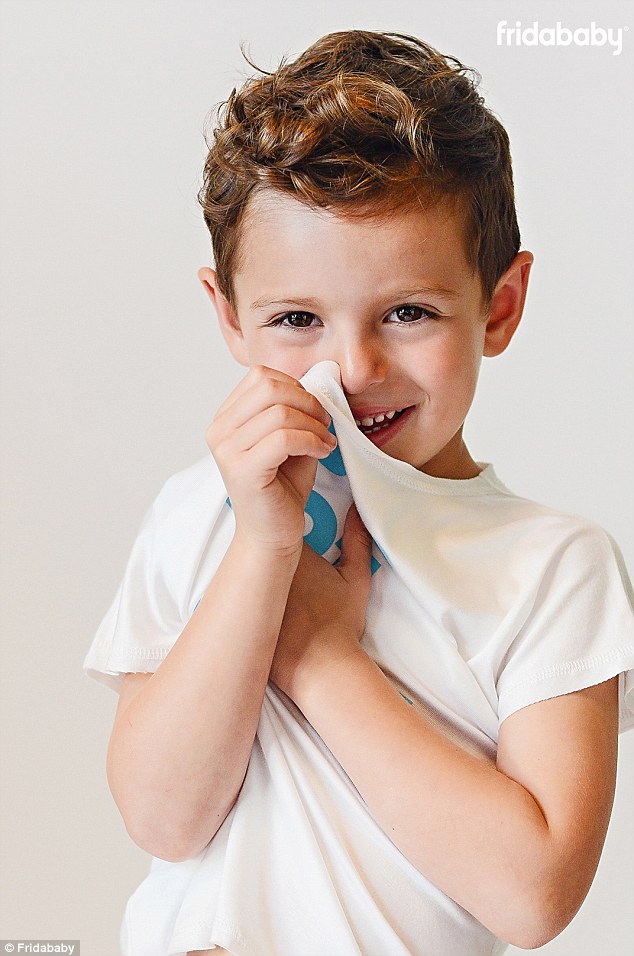 Gross: Some parents shared information about ‘projectile poop’ while others detailed some horrifying tales about vomit 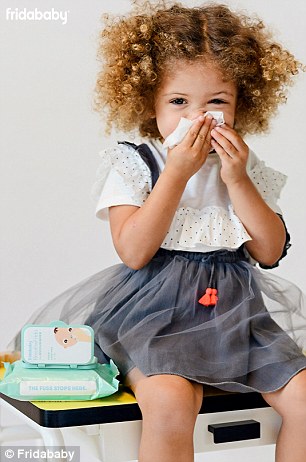 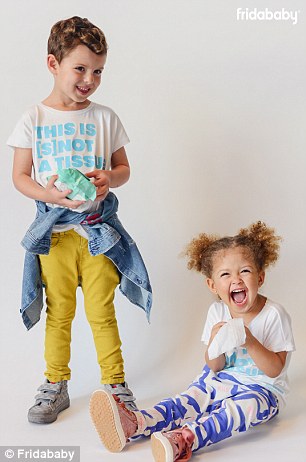 That is snot a tissue! According to baby hygiene brand Fridababy, 63 per cent of parents wipe their children’s boogers away with their own T-shirts

Indeed, poop seemed to be a running theme for many parents, with one mother saying of her now-adult daughter: ‘When she was a baby, she had an amazing explosive poo which just totally filled her baby grow. I mean it was everywhere.

‘I couldn’t touch her, so I filled the bath and held her by one arm and slushed her about in the water to get it all clean.’

The same woman added: ‘There was also the time when my daughter waited until we had just strapped into our airplane seats, and as we were taking off, she threw up all over me. Helping hand: Fridababy just released BreatheFrida Booger Wipers to give parents something else to use in place of a T-shirt

‘The crew were strapped in so I had to sit there with her sick all over me until the seat belt sign went off.’

Meanwhile, one dad simply said of his parenting experience: ‘Boogers everywhere. On everything. Almost always on your shoulder and you only see it at the end of the work day.’

A New York-based mother said that one of her grossest parenting experiences saw her forced to ‘clean toddler vomit out of a car seat after a terrible bout of car sickness’.

She added: ‘I learned to always have a spare grocery bag in car, just in case.’

The parents made their candid confessions as it was revealed that a whopping 63 per cent of moms and dads regularly use their own T-shirts in order to clean away their children’s snot – instead of a tissue or wipe.

According to baby hygiene brand Fridababy, the majority of parents tend to turn to their own clothing in times of need – a habit which prompted Fridababy to release a new product called the BreatheFrida Booger Wiper, a combination tissue and chest wipe that contains ‘chamomile, aloe and vitamin B to provide soothing relief to tender noses, and all-natural menthol and eucalyptus to ease breathing’.

Speaking about the need for such a product, the company’s founder and CEO, Chelsea Hirschhorn, said: ‘It’s gross, but it’s true. I’m one of the 63 per cent of parents that has used their kids own t-shirt as a tissue – multiple times.

‘The thought of someone doing that to me really escalated the issue, so now I make sure I always have BreatheFrida Snot Wipes within arms reach. They are, by far, the better Booger Wiper. These wipes not only keep little noses crust and drip-free, they also help baby breathe easy thanks to all natural eucalyptus vapors.

‘With chamomile and aloe vera in each wipe, it’s like a tissue + chest rub in one!’

The brand even introduced a comedy T-shirt that bears the words, ‘This is NOT a tissue’, as a reminder to parents to find other means of getting rid of their babies’ boogers moving forward.