A couple revealed how they packed up their lives in the UK to take their three children sailing around the world.

Alan and Irenka Wood rented out their Brighton home, left their jobs and sold their car to take daughter Rowan, 11, and sons Darroch, eight, and Yewan, six, on the global adventure on the £105,00 53ft super yacht.

The family, who are currently moored off the Greek islands, spend their days exploring, doing yoga and paddle boarding in clear blue waters – and admit they currently have no plans to return home.

But the set-up isn’t always as idyllic as it might appear, with Alan and Irenka admitting homeschooling their three children is a ‘constant challenge’.

Global adventure: Alan and Irenka Wood rented out their Brighton home, left their jobs and sold their car to take daughter Rowan, 11, and sons Darroch, eight, and Yewan, six, around the world on a super yacht. Pictured, Irenka and her children do early morning yoga on the deck 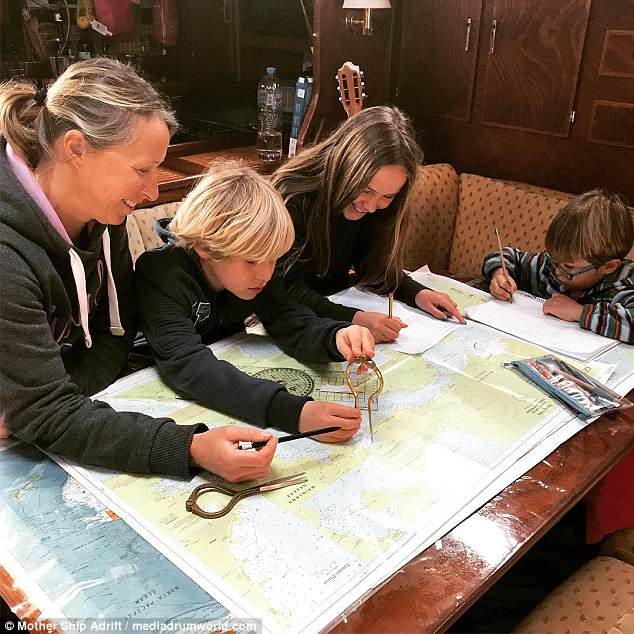 Hands on: Irenka and her eldest two children work to plot out their rout as their son Yewen, six, does work on the side. The parents split the responsibility of home-schooling the children 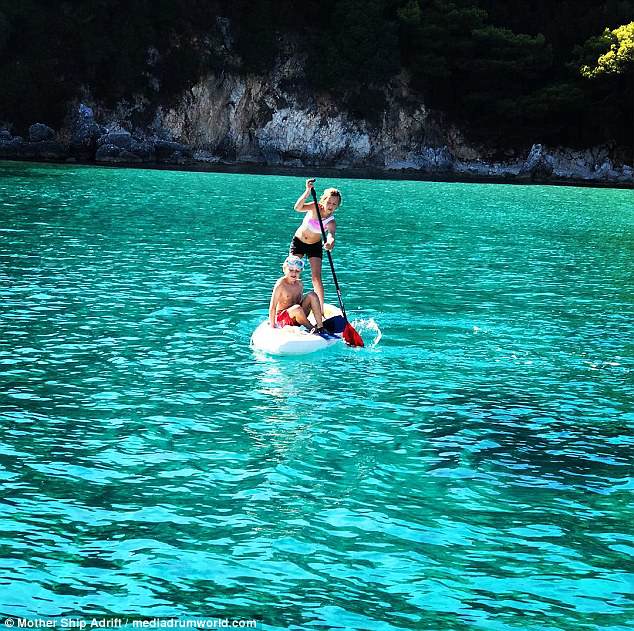 Idyllic: Two of the children enjoy paddle boating in the blue waters off the coast of Greece 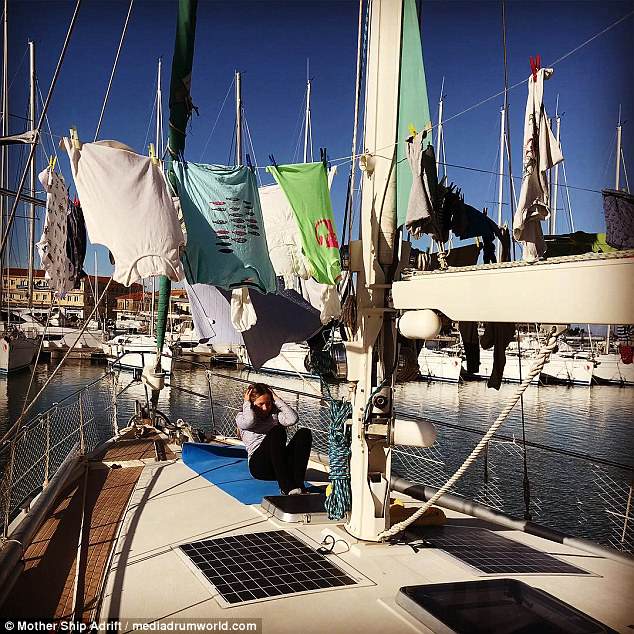 Keeping fit: Rowan, 11, exercises on the deck of the yacht beneath a line of washing

‘The challenge of home-schooling is a whole subject in itself,’ Alan said.

‘Between us parents, we have taught students in colleges, boats and prisons, but nothing prepared us for that weird parent/teacher duplexity when teaching our own young kids.

‘Keeping them motivated, engaged and interested is a constant challenge and there’s no headmaster or classroom assistant to turn to when the guano hits the mast.

Where have the Wood family visited?

The family have spent the past several months in Greece after being setback by harsh winter weather. They have visited:

Heading South to Rhodes, then Crete, Sicily, Italy, France, Spain, The Balearics and The Canaries.

They then hope to be crossing the Atlantic by December, where they will head towards the Caribbean before  travelling north to the US.

The Woods currently have no plans to return home and hope to travel across the Pacific to New Zealand, Australia and South East Asia.

‘But every new encounter and place is a potential learning experience; everyone we meet has some story, skill or pearl of wisdom to share.

‘And it’s humbling to discover how many retired teachers out here are willing give up their time to become part of our impromptu, crowdsourced, educational programme.’

Alan, 49, who owned a furniture design business, and Irenka, 47, a part-time sailing instructor, plan to see Europe before visiting destinations including the Caribbean, Australia and New Zealand.

However so far they have been forced to spend the winter moored in Greece after unusually harsh conditions stopped them from moving on.

‘It would be easy to talk about anchoring in a bay, swimming in crystal clear water and having a BBQs with friends off the back of the boat,’ he said.

‘Don’t get me wrong, these are all fantastic experiences that we obviously enjoy, but in actual fact the high points are times when we use our resourcefulness to overcome problems.

‘Like the time we repaired the washing machine with a kid’s party balloon and could wash our clothes for the first time in weeks. Or the time we worked out how to fix an ongoing issue with the toilet using salad dressing.’ 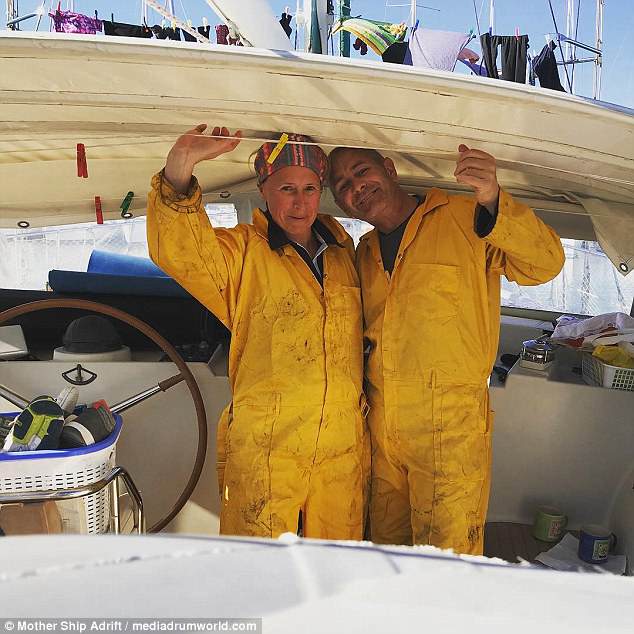 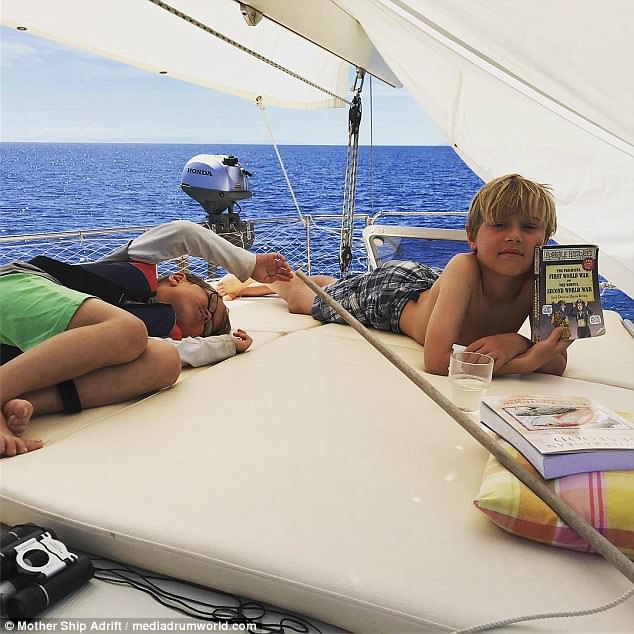 Time for learning: Brothers Darroch and Yewen are given a history lesson in the sunshine 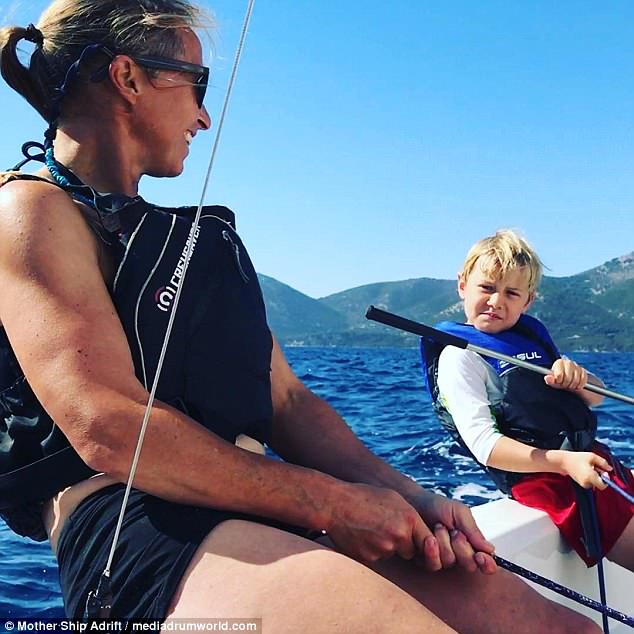 Practical skills: Irenka, a sailing instructor, with eight-year-old son Darroch on the water

Alan and Irenka met while captaining flotillas in Greece more than 15 years ago and saved up for the best part of a decade before embarking on their adventure.

They live off the monthly rent they earn off renting their family home and try to live off a £1,500-a-month budget.

Alan continued: ‘Renovating and maintaining a sailboat while travelling and living aboard is a challenge. If the boiler brakes down we can’t just pick up the phone to the local plumber; when the generator packs up, no electrical company will send out a van to sort us out. 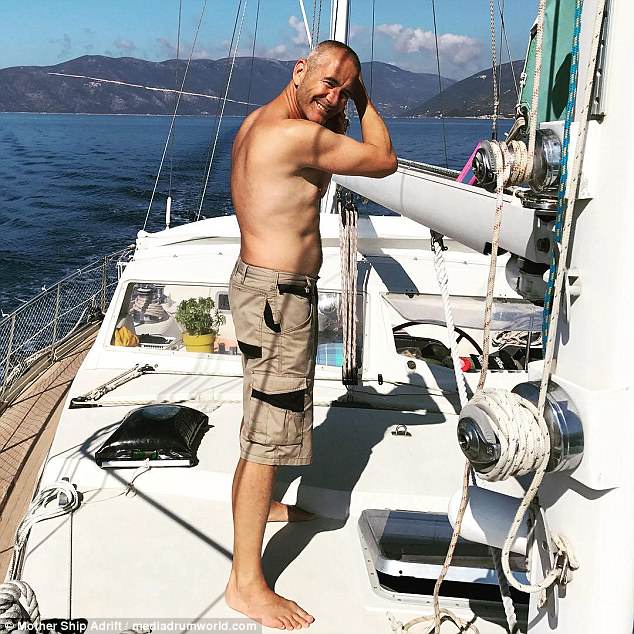 Dream journey: Father-of-three Alan, 49, prepares to set sail off the coast of Greece 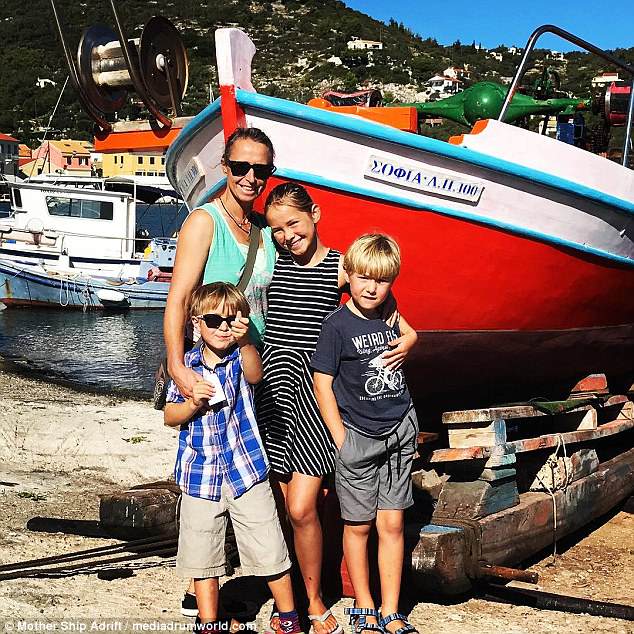 Quality time: Irenka with her children during a day of exploring on one of the Greek islands

‘A wrong navigational decision or mechanical failure can cost us thousands, or we could even lose everything. There’s no RNLI out here to pull us out of a scrape like in the UK, so everything is down to us and us alone.’

However the parents have faced accusations of being ‘selfish’ from critics who disagree with their decision to uproot their children and take them out of school.

Alan, who is also an experienced sailor, explained how he had received ‘a lot of shtick’ in response to an article he wrote before setting off last year. 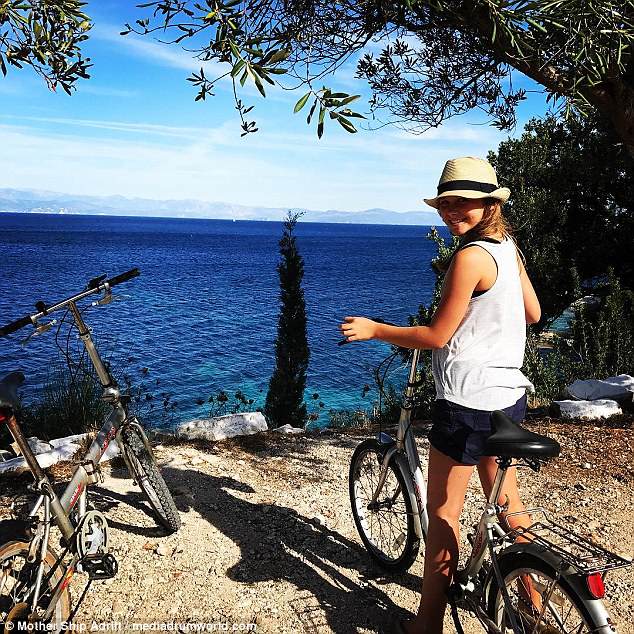 Active: Eleven-year-old Rowan checks out the view from a cycle track on a Greek island 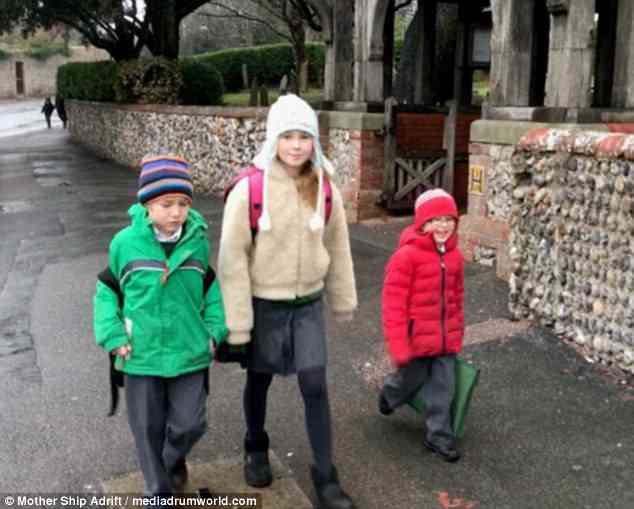 Old life: The children walking to school near their Brighton home before setting off last year

He said: ‘There were people accusing us of being “privileged” and “selfish” by putting our kids’ life at risk to follow our dream. Some even suggested social services should get involved.

‘But safety is objective. Most people die from heart disease and cancer exacerbated by sitting in front of a screen for too long. Our education system – sadly – is failing young boys and making narcissistic victims of young girls. Giving the kids a life of adventure is not selfish, it’s giving them a lifeline.

‘We are not teaching them to be safe, we are encouraging them to be resourceful, adaptable and above all, happy. There’s no better activity than sailing to learn team work and compromise and there’s no worse place to harbour prejudice or envy. 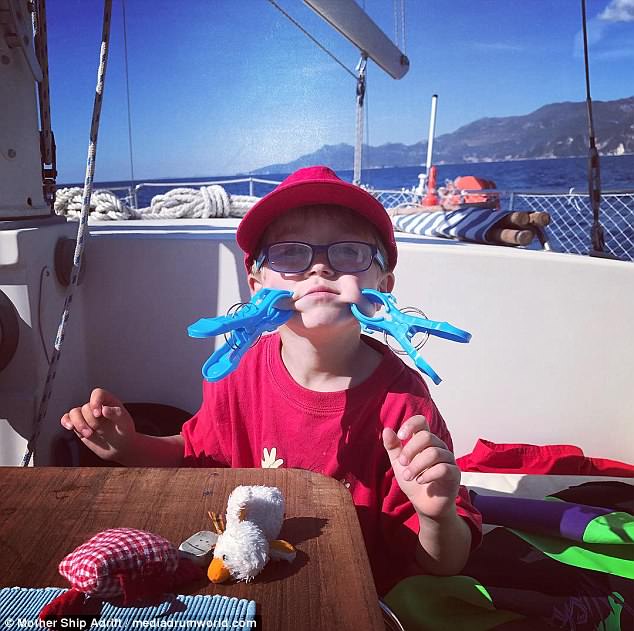 Playful: Six-year-old Yewen pulls a funny face as he relaxes on the deck of the 53ft super yacht 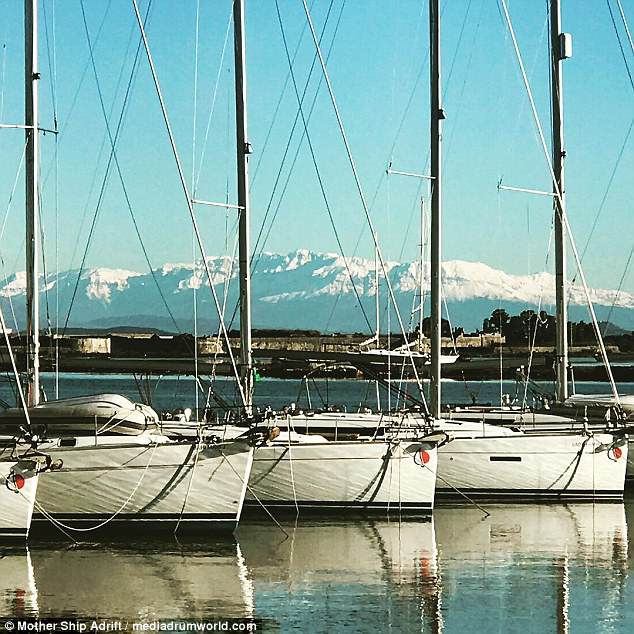 New home: One of the views from a stop on mainland Greece, where they spent the winter

‘Division of labour defies traditional gender roles, determination and wisdom win out over sex, age and disability. Boat kids are exposed to this daily – they don’t need social media to tell them how to think or define their world.’

He added that he and his wife had worked tirelessly to save up the money needed to embark on their dream trip.

He said: ‘And anyone who thinks a liveaboard lifestyle is “privileged” – well I would challenge them to try it. We threw out our TV over a decade ago, constantly worked late into the night on small business start-ups, sold most of our possessions and lived a frugal life for years. 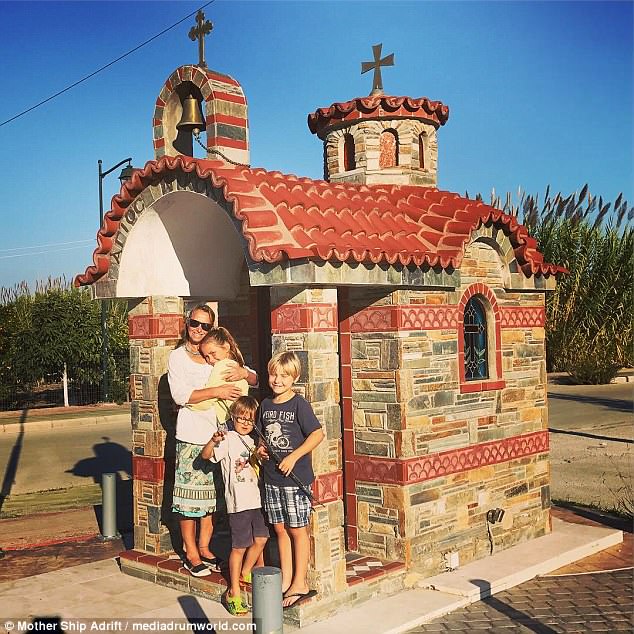 Culture: Irenka and her three children at an orthodox Greek temple on the island of Lefkas 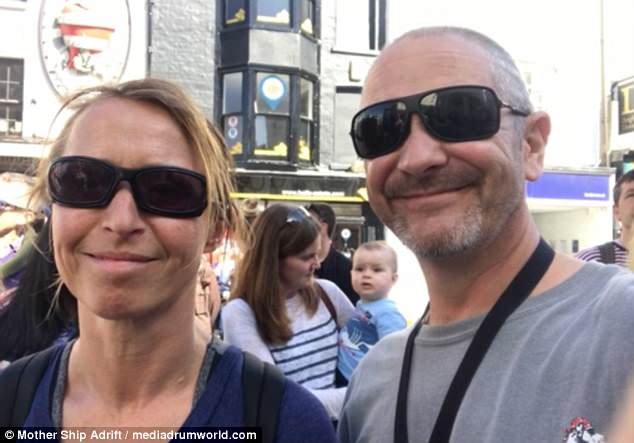 Shared passion: Alan and Irenka, pictured in the UK, saved for nearly a decade before sailing

‘We worked hard to achieve our dream – damned hard – renovating houses and learning everything we could so we wouldn’t have to pay other people to do stuff for us. It takes a lot of old fashioned, working class grit to get this “privileged”.’

The proud father said the ‘best part’ about the experience has been seeing the change in his children.

‘[It has been] spending time with the kids and watching how this boating life is transforming them into rounded, independent and resourceful individuals,’ he said.

‘Like the time they learned to play their first song together in a “band” and took their instruments out onto the next quayside we moored at to busk, and came back with Euro 40 ice-cream money.’