The heartbroken parents of a newborn with a rare blood vessel constricting disorder are trying a last ditch treatment to save her.

Cassandra Brooks and Brandon Pritt, from Staunton, Virginia, had been trying to get pregnant for four years and found out they were expecting on Valentine’s Day.

Their daughter, Raven, was born prematurely earlier this month and, when she was just two weeks old, doctors told her parents she was suffering from a disease known as GACI.

It’s caused by a buildup of calcium that narrows blood vessels and arteries and restricts blood flow, which can lead to heart failure and kidney failure.

Raven was given just a 15 percent chance to live past six months.

Now, the couple, told the Staunton News Leader they’ve received approved to transfer their daughter to the Children’s Hospital of Philadelphia where she will be treated with a new drug in hopes of saving her.

Cassandra Brooks and Brandon Pritt are trying a last ditch treatment to save their newborn daughter Raven after she was diagnosed with a rare disorder. Pictured: Brooks and Pritt with Raven 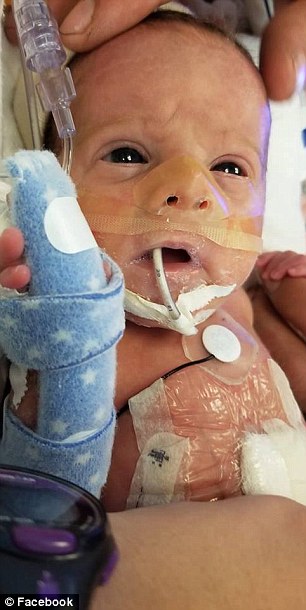 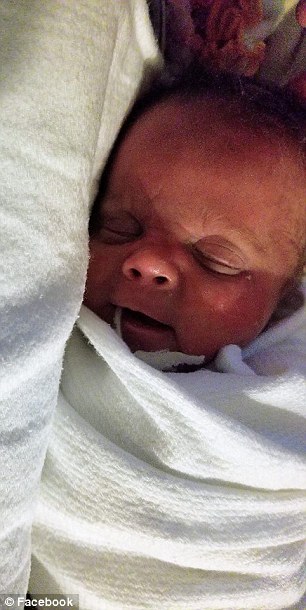 Around week 31, Brooks had to have an emergency C-section after a scan showed Raven (left and right) had hydrops fetalis, which is a fluid buildup around the heart, and was in distress. The baby was transferred to the NICU unit at the University of Virginia Health System in Charlottesville

Generalized arterial calcification of infancy (GACI) is a rare, genetic disorder that affects the circulatory system.

In about 75 percent of children, it is caused by mutations in the ENPP1 gene, which gives instructions to make a protein called ATP.

Both parents must be carriers of the recessive gene to pass it on and, if they do, the child has a 25 percent chance of having GACI.

This genetic defect causes the body to have low levels of an enzyme called pyrophosphate, which prevents calcium from building up in blood vessels and arteries.

According to the Children’s Hospital of Philadelphia, this abnormal calcium buildup (calcification) narrows both vessels and arteries and restricts the flow of blood.

Infants who are diagnosed with the disease may have difficulty breathing or an enlarged heart and are at risk for heart attacks, strokes and kidney failure.

The disorder is very rare, occurring in about one in 391,000 children.

There is a 15 percent chance of living past the first six months of life, which is known as the ‘critical period’. 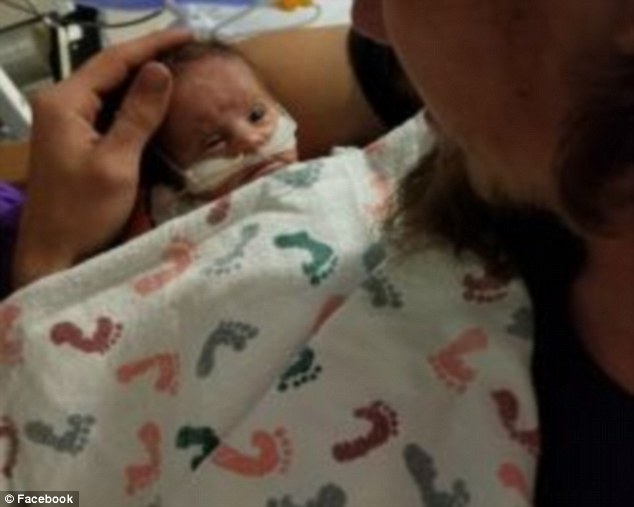 At UVA, Raven was put on a ventilator and had a tube to drain the fluid around her heart. She was also given the opioid fentanyl to try to ease her pain. Pictured: Pritt holding Raven After two weeks, Raven (pictured) was off the ventilator and had her tube removed. Doctors took her off the painkillers and her parents thought she was close to being able to go home But after doctors noticed her blood pressure was abnormally high so they ordered a CAT scan. Pictured: Raven

Brooks said her pregnancy was not easy from the start.

‘I was sick all the time – morning sickness. My back was really bad throughout my pregnancy,’ she told the newspaper.

She was given magnesium sulfate, an inorganic salt administered via IVF, to stop her contractions and was sent home.

It’s not understood exactly how magnesium sulfate works, but it is known to decrease calcium levels in uterine muscle cells, according to Healthline.

Because muscles cells need calcium to contract, the magnesium sulfate is believed to relax the muscles.

One week later, week 31 of her pregnancy, Brooks said she woke up and said she didn’t feel her daughter moving.

She visited her doctor’s office, who immediately sent her to Augusta Health, where it was discovered that Raven had hydrops fetalis, which is a fluid buildup around the heart, and was in distress.

Brooks had an emergency C-section and delivered her daughter, who was transferred to the NICU unit at the University of Virginia Health System in Charlottesville. 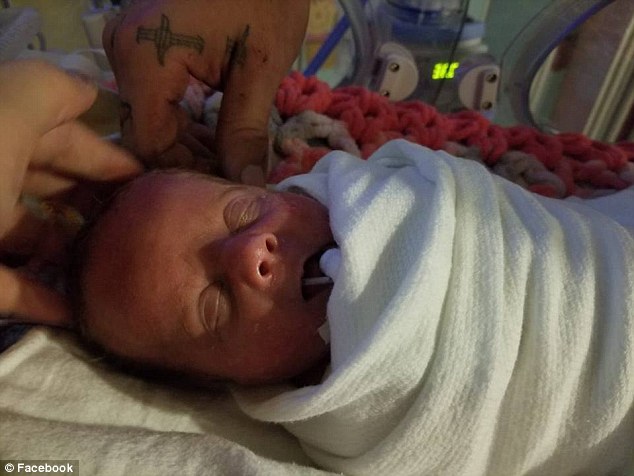 The results of the scan showed that Raven (pictured) has a rare, genetic disorder called generalized arterial calcification of infancy, or GACI 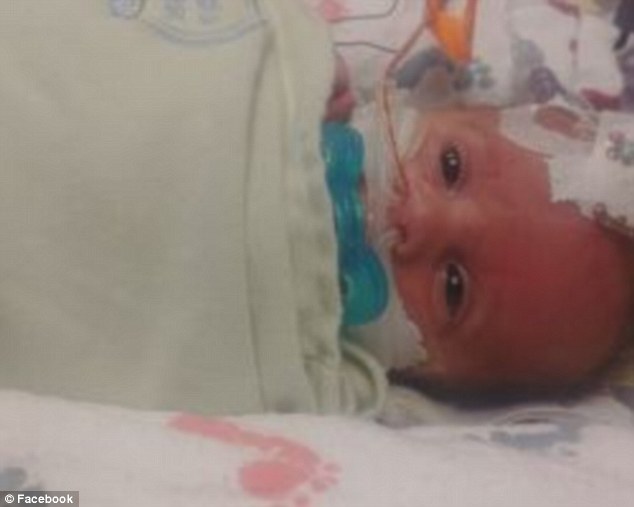 The disorder is caused by a buildup of calcium that narrows blood vessels and arteries and restricts blood flow. Children have a 15 percent chance of living past six months. Pictured: Raven 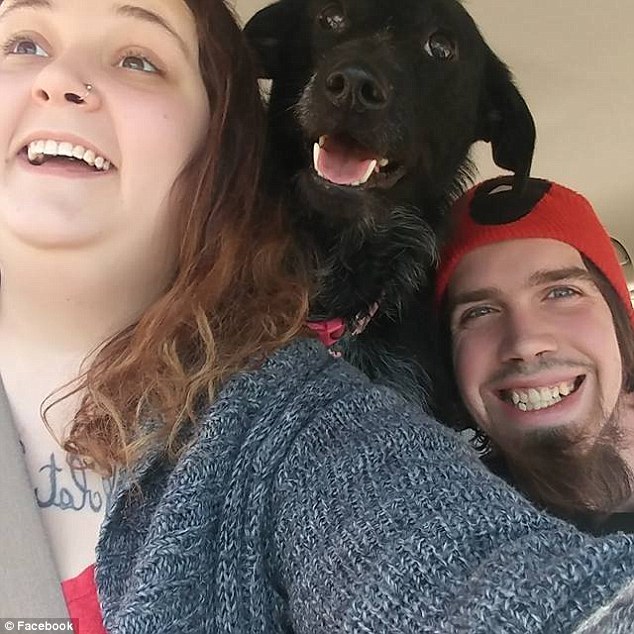 Both parents must be carriers of the recessive gene – which Brooks and Pritt (pictured together) do to pass it on. The child has a 25 percent chance of having GACI

At UVA, Raven was put on a ventilator and had a tube to drain the fluid around her heart. Brooks says her daughter was also given the opioid fentanyl to ease her pain.

Brooks was kept at Augusta Health for three days before she was discharged.

After two weeks, Raven was off the ventilator and had her tube removed. Doctors took her off the painkillers. She was also moved from her incubator to a crib and the couple thought she was close to being able to go home.

‘Then they noticed she had really high blood pressure. Abnormally high for a baby,’ Brooks said.

Doctors ordered a CAT scan and, when the results came back, Raven was diagnosed with GACI.

‘The doctors called us in for a family meeting. I knew we were getting bad news. I just wasn’t ready to hear it,’ Brooks said.

‘They brought us over into the room and sat us down and showed us the CAT scans and it’s awful.

‘We broke down. We just wanted to spend all the time we could with her.’

After doing some research, Brooks found there was a pediatric endocrinologist at the Children’s Hospital of Philadelphia (CHOP) who has worked with GACI patients in the past. On Monday, the UVA Hospital medical board and the couple’s health insurance approved her parents’ request to transfer Raven (pictured) to Children’s Hospital of Philadelphia 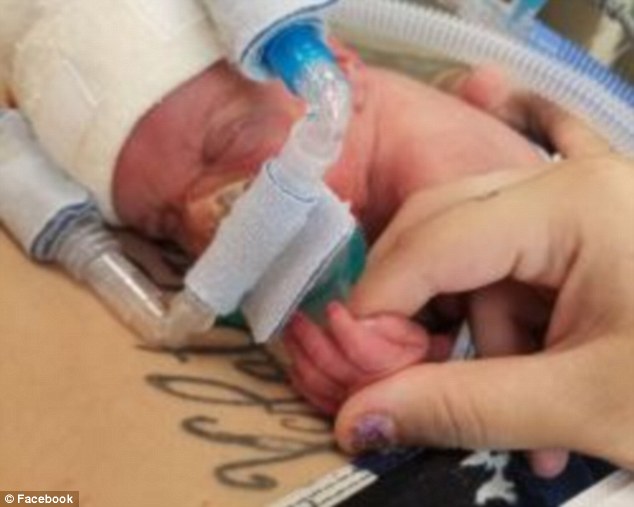 There, Raven (pictured) will receive a new drug that breaks down minerals in the blood by a pediatric endocrinologist who treats GACI patients

On Monday, the UVA Hospital medical board and the couple’s health insurance approved her parents’ request to transfer their daughter to CHOP.

‘As of right now, we are stuck in limbo waiting to figure it all out. We’re just trying to keep it together,’ Brooks told the News Leader.

Raven has already been given her first treatment, a new drug that breaks down minerals in the blood that she will be receiving when she gets transferred.

If she survives past six months, she could face further issues including calcification of the joints, hearing loss or a softening of the bones known as rickets, according to CHOP.

‘But all of those are treatable, and as long as she is alive and can have a normal life, that’s what we want,’ said Brooks.

‘It doesn’t matter if she is short because of it or has to wear leg braces – as long as she gets to grow up.’

The couple has set up a GoFundMe page to help cover travel expenses and medical costs. So far, $160 has been raised out of a $5,000 goal.