Anxious parents are desperate for their baby to have a large birthmark removed from her nose after being tormented by bullies who call her ‘Rudolph’.

Richard and Marie Touhladjiev said strangers taunt little Tahlia, who is one, in the street and point at her strawberry birthmark, known as a haemangioma.

Richard, 45, has become so worried by the nasty comments he’s concerned his daughter will be bullied at school.

The father, from Rhyl, north Wales, said: ‘A gentleman behind kept on taunting her, saying ‘Hiya Rudolph’, in the doctors’ surgery once. 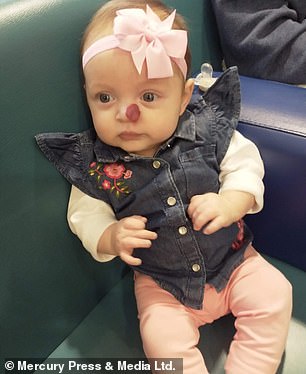 Anxious parents Richard and Marie Touhladjiev, from North Wales, are desperate for their baby, Tahlia, to have a large birthmark removed from her nose after being tormented by bullies who call her ‘Rudolph 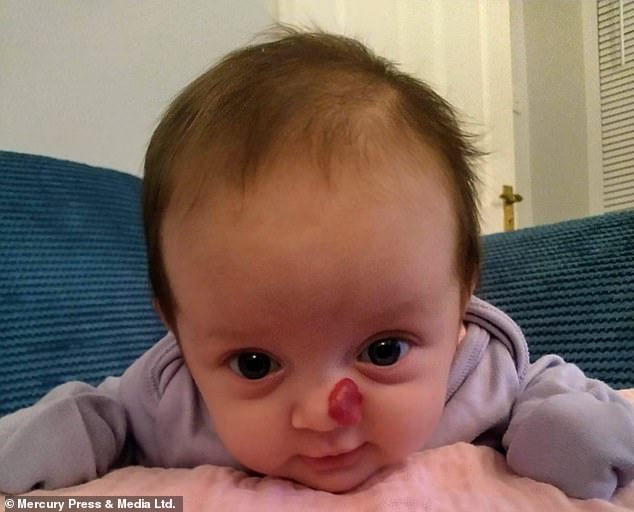 Tahlia, who is one, was born with a hemangioma, which is commonly known as a strawberry birthmark

‘It was absolutely disgusting that a grown man was calling Tahlia names because of a blemish on her face and it haunts me to this day.

‘There have been more rude passing comments where people point out her nose in public and it’s quite frustrating as a parent because I want to protect my child to the max but I can’t react.

‘People always ask what’s on her nose, as if she’s been eating a jam sandwich and got some on her face, but they don’t realise it’s a permanent, natural thing.’

The little girl is receiving treatment to help reduce the mark’s size and colour but Richard said he and Marie are still keen for the mark to be removed.

‘It is still quite dominant on her nose so we do want it removed to stop her getting name-called,’ he said.

‘Bullies at school in this day and age can be horrendous and we don’t want her to go through that.

‘We are looking at what can be done to clear it.’

Richard and Marie also want to share Tahlia’s story in a desperate bid to raise awareness about birth marks.

Richard, a driving instructor, said: ‘It’s so important for us to spread awareness about it because we don’t want other children to go through what we’ve experienced, where adults have called our baby names. 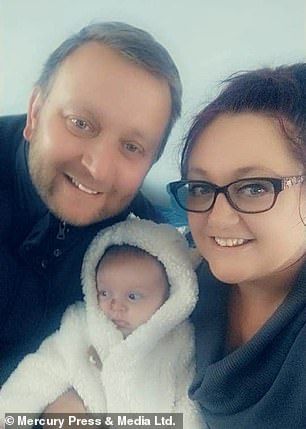 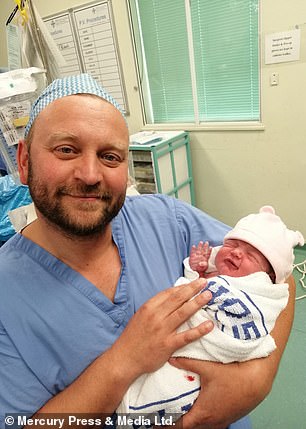 Richard, 45, has become so worried by the nasty comments he’s concerned his daughter will be bullied at school. The father, from Rhyl, north Wales, said: ‘A gentleman behind kept on taunting her, saying ‘Hiya Rudolph’, in the doctors’ surgery once

‘As it’s grown and grown we have become a little bit weary that if it hasn’t gone when she gets older, what comments will she get from other children.

‘I was bullied for my surname in school so I know what it’s like, and I feel that we do need to try and see if we can reduce it to a state where it’s faded to try and make her life a little bit easier.

‘That’s why we want to raise more awareness about strawberry birthmarks and let people know that it’s nothing to be ashamed of if your child has one.

‘They’re still children who have feelings at the end of the day.’ 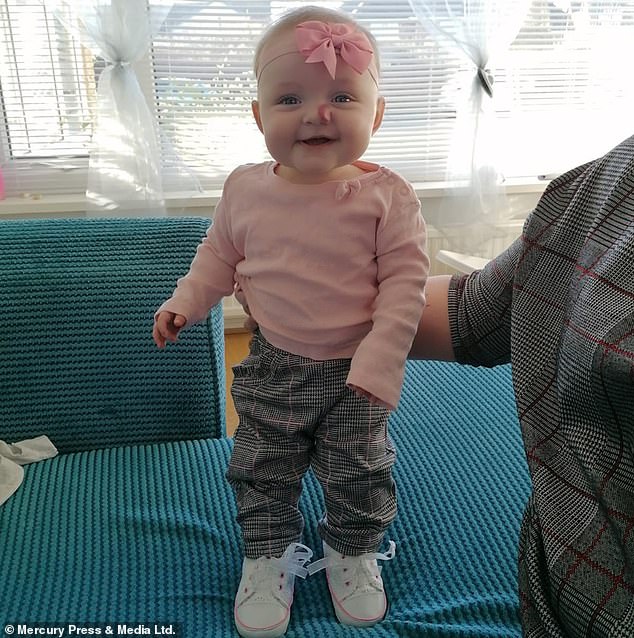 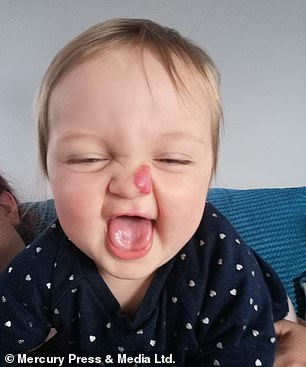 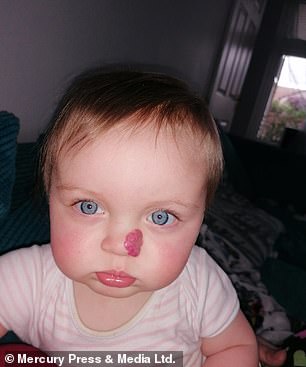 Richard, a driving instructor, said: ‘It’s so important for us to spread awareness about it because we don’t want other children to go through what we’ve experienced, where adults have called our baby names’

Richard and stay-at-home mother Marie first thought the pink mark on Tahlia’s nose was due to birth trauma, before it grew and was diagnosed as a haemangioma.

WHAT IS A HAEMANGIOMA?

A haemangioma is a tumour that develops as a collection of small blood vessels beneath the skin.

Also known as strawberry marks, a haemangioma causes a raised, red area on the skin and a bluish swelling deeper underneath.

Their cause is not fully known. Some evidence suggests they may arise from placental tissue early in pregnancy.

Around one in 10 babies have a haemangioma to some extent. They are more common in girls, premature infants, low birth weight babies and multiple births, such as twins.

Most haemangiomas do not require treatment but do need monitoring because they can bleed easily if scratched.

Ulcerated haemangiomas may require treatment, along with those that obstruct the airways, or form on the eyes or lips.

Painkillers and antibiotics may be offered if the blemish is infected.

The beta-blocker propranolol may also be given. This narrows blood vessels, preventing blood from ‘feeding’ the haemangioma. Over time, the blemish becomes paler, softer and shrinks.

Left untreated, haemangiomas on the eye can distort vision and those on the lips can make feeding painful.

Doctors prescribed Tahlia with beta blockers medication, which lower blood pressure. It is hoped this will cut off the blood supply to the birthmark and stop it from growing.

At the moment, Tahlia is still on this course of treatment and could come off it next month, but Richard and Marie are concerned that the mark will still be there in the future.

Richard said: ‘With the past experiences we’ve had with comments, we don’t want our daughter going to school and getting picked on and singled out for having a prominent birthmark.

‘I’ve always known about birth marks but not one that’s as deep and red as Tahlia’s.

‘To us, Tahlia having the birthmark makes her extra special.

‘But we just want to see what we can do about it to make it easier for when she’s older.’

But they decided to try for a baby together shortly after getting married.

But they did not expect to be successful because Marie has polyscystic ovary syndrome (PCOS), which can make it difficult to get pregnant.

Richard also had fertility issues caused by a tumour he had had on his pituitary gland, which has a role in stimulating sperm production.

However, Marie and Richard were amazed when they discovered she was indeed pregnant.

But after Marie, a trained accountant, had a C-section to give birth to Tahlia, she suffered a large bleed and lost nine pints of blood.

‘She nearly died three times as a result,’ Richard said.

She spent three days in intensive care but pulled through.

However, during this period, she lost the early opportunity to bond with her daughter and breastfeed from the off.

It is therefore important for her and Richard to share their story in the hope of helping others who receive backlash for their birthmark.

Richard added: ‘The whole experience of having a baby was not quite how it should have been from the start.

‘So this is one of the reasons why we’re so passionate about raising awareness because of the experiences that we have gone through as parents.

‘She really is our miracle baby.’ 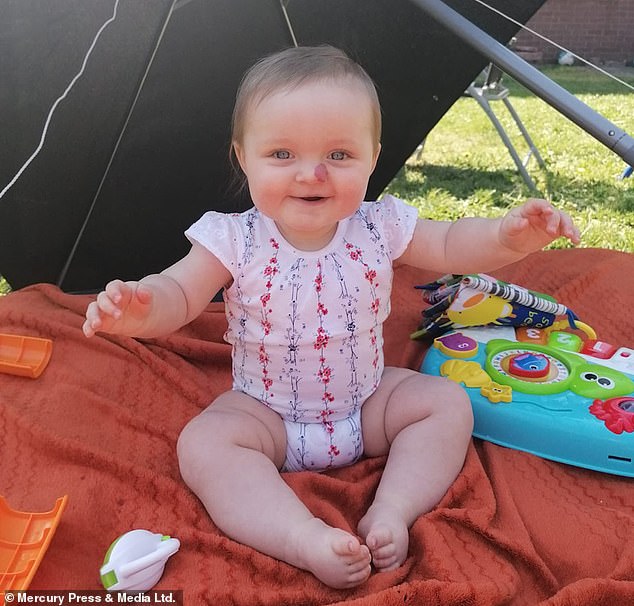 Polycystic ovary syndrome (PCOS) is a very common condition that affects how a woman’s ovaries work.

There are no exact figures but as many as one in 10 women of childbearing age are thought to have the condition.

It’s a hormonal disorder which causes the ovaries to become enlarged and to develop numerous small cysts on the outer edges.

Symptoms of PCOS include:

While the exact cause of PCOS isn’t known, it is thought to run in the family and be triggered by hormones. Insulin resistance, which is a precursor to diabetes and caused by a diet high in sugar, is thought to be a big cause.

There’s no cure for PCOS but many of the symptoms can be improved with lifestyle changes such as losing weight and eating a health, balanced diet.