Police have warned parents about the dangers of pink ecstasy tablets which they fear are being circulated among children after a 16-year-old was arrested.

The pills, dubbed ‘Route 66’ because they are shaped like the iconic US sign, were seized by officers from a teenage boy in Wigan, Greater Manchester.

Officers were called to Winstanley Precinct at about 8.30pm on Saturday night to reports of anti-social behaviour involving some 30 youths.

The pills seized by officers in Wigan, Greater Manchester, on Saturday night. A 16-year-old boy was arrested on suspicion of possession with intent to supply

A 16-year-old boy was arrested on suspicion of possession with intent to supply and has since been released under investigation.

Now police are warning parents to be aware of the effects of drug use and make sure they know where their children are.

Residents should also be vigilant and report any suspicious behaviour or vehicles.

‘They can be a mix of all sorts and can be fatal. You don’t know what is in them and you can’t predict the effects,’ he said.

He added that it is worrying to see such dangerous substances on the streets. 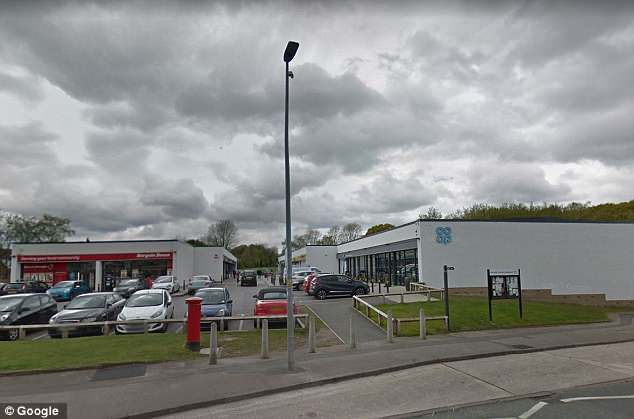 Winstanley Precinct where a group of about 30 youths dispersed when officers arrived. The area is a known hotspot for drug dealing and anti-social behaviour

Ecstasy is also known by its chemical name of MDMA.

It has high profile links to dance music culture in the late 80s and early 90s.

The effects take about 30 minutes to kick in and often last for 3 to 6 hours.

They include an energy buzz, anxiety, paranoia and psychosis.

GMP Wigan West, which covers the Winstaley area, posted a warning on Facebook.

It said that about 30 youths dispersed when officers arrived at the shopping centre, where children aged 10 to 16 are known to gather and intimidate local residents.

They found ‘what is believed to be cocaine and pink coloured ecstasy tablets embossed with ‘Route 66’.

They added: ‘Enquiries are still ongoing but police are concerned that a number of these youths may have been supplied drugs.

‘Parents are warned to be vigilant to the whereabouts of their children and to look out for the signs of drug use.’