Parents who wanted to call their son Lucifer, another name for the devil, were told he ‘wouldn’t succeed in life,’ if they gave him that name.

But a registrar tried to bar them from using the name, which is banned in New Zealand.

Dan, 37, a plant hire company boss told The Sun: ‘She told us he would never be able to get a job, and that teachers wouldn’t want to teach him.

‘I tried to explain that we are not religious people, and Lucifer in Greek means ‘light-bringer’ and ‘morning’ but she wouldn’t listen.’

Dan and his wife Mandy said they surprised to get any grief over the name,  which first appeared as the name for the devil in the King James Bible in 1611.’ 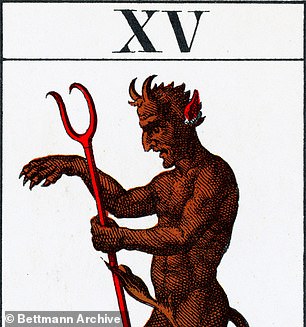 Despite objecting at first, the registrar allowed the Sheldons to name their son Lucifer

Derbyshire County Council said: ‘We apologise if they were offended but it is the job of our registrars to advise in these matters as sometimes people are not aware of certain meanings or associations around certain names.’

In 2013 New Zealand released a list of banned names that included Lucifer, Christ and Messiah.

According to CNN, six coupled had tried register their baby under the name Lucifer between 2001 and 2013.

However, in 2018, Scottish officials allowed a baby to have the name, while another was allowed to be called Messiah.

There were babies also called Awesome, Nun, Royalty and Pepper.

Speaking last year, Edinburgh Council’s Karen Watson told the Sun: ‘There aren’t really any rules around names. It’s a case of people can call their babies whatever they like.’

She added: ‘To be perfectly honest, names now are actually pretty normal and there are only one or two that go a wee bit different.

‘As long, as it’s not offensive we don’t get involved in what they are calling their baby.’