A woman in her 40s accused of causing a fire that tore through an apartment building in Paris, killing at least ten people including a baby, allegedly started the blaze after a fight with her firefighter neighbour about noise.

A 22-year-old fireman who lives on the second floor of the building in Rue Erlanger, in the upmarket 16th arrondissement, confirmed he had been quarrelling with the alleged arsonist about her habit of playing loud music late at night.

He said he had come face-to-face with the neighbour shortly before the fire, at which point she ‘acknowledged I was a firefighter, and that I liked the flames. Then I smelt burning, and realised she had set fire to the floor.’

The woman, who is alleged to have ‘psychiatric problems’, was arrested in the street below the building shortly after the blaze started in the early hours of Tuesday, while trying to set fire to a car and a wheely bin in the street outside the block.

While the official cause of the blaze, which left 36 people – including six firefighters – injured has not yet been announced, an investigation into ‘death by arson’ has been launched.

Blaze: The fire in the eight-storey building killed at least ten people and also left 31 people – including six firefighters – injured 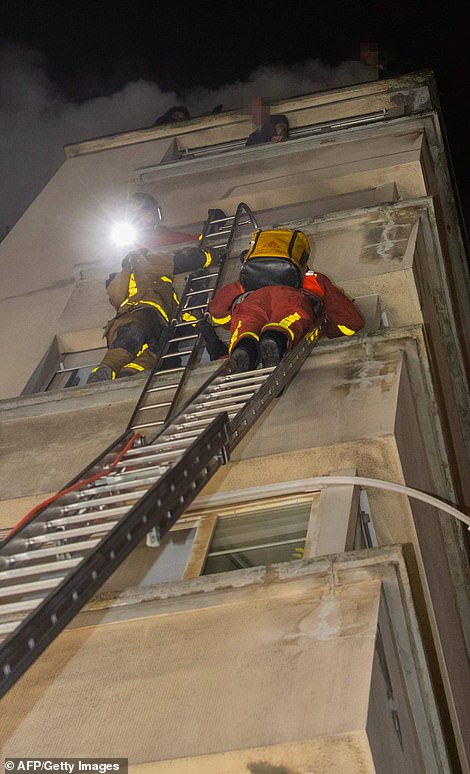 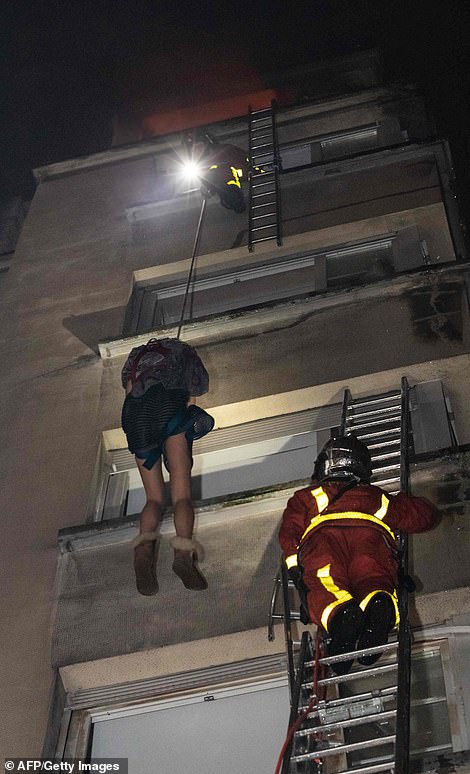 Dramatic: Images show firemen rescuing residents who climbed up onto the roof and top floor to escape the fire 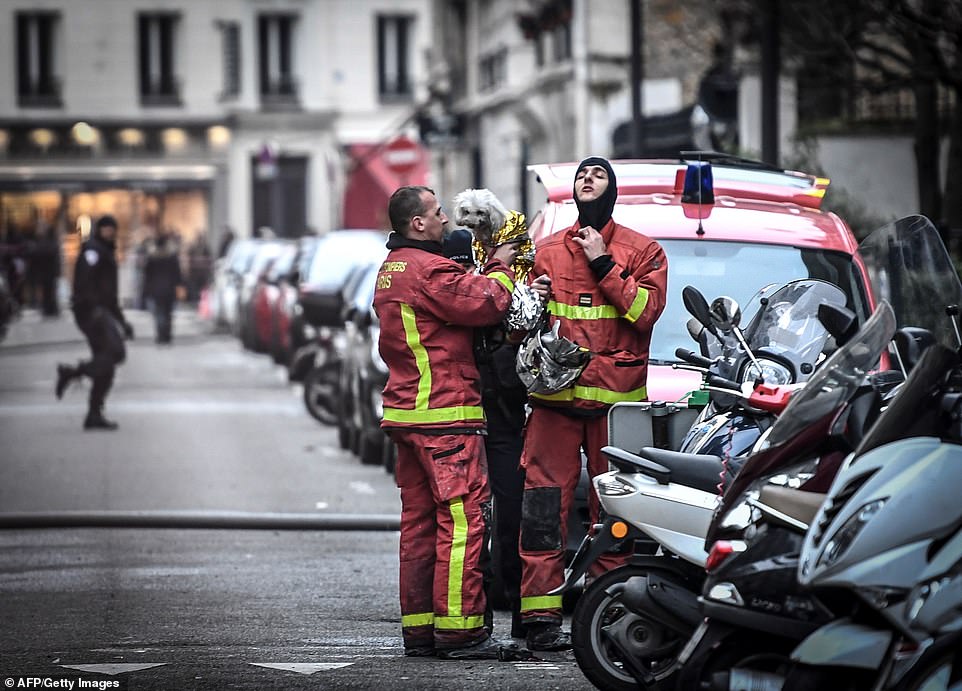 Rescued: Firefighters carry a dog that was saved from the flames of the eight-storey apartment block 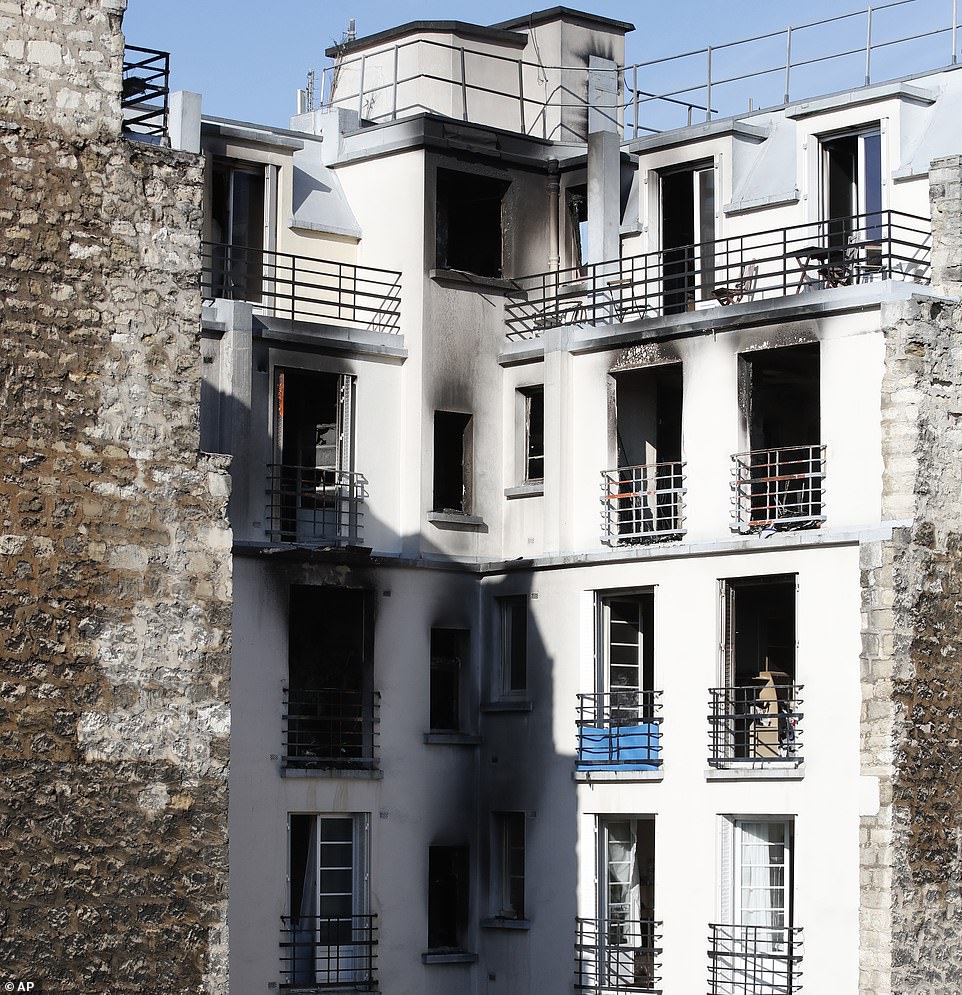 Destruction: View of the apartment building  on Tuesday, hours after the fire that killed ten people was extinguished

‘We were disturbed by my neighbor who had put the music on very loud at home,’ the fireman, named as Quentin L. told Le Parisien.

‘I’ve only been in the building three months since I was in this building, and it was not the first time she had done that.’

Quentin told Le Parisien newspaper that he and his girlfriend did not know the unidentified woman was being treated in a nearby clinic for mental illness.

‘I did not know she had psychiatric problems,’ he said. ‘I had never seen her before, but we could hear her screaming regularly, or making incoherent remarks.

‘I know that a police patrol has already intervened about a fortnight ago because of her behavior.

‘On Monday night my girlfriend went to knock on her door, and the neighbour was insulted by that. I’m a professional fireman and that’s why I called the emergency number at 11.50pm.’

Police instructed the couple to leave the building so as to spend the night elsewhere, and as they did so they came ‘face to face’ with the woman on the stairs.

He said:’The police had left. After they left, my neighbor tried to smash my window and my door to take revenge.

‘The neighbour explained to me that there was paper in front of my door with wood. She had set fire to my home to take revenge.

‘When I met her, she wished me good luck by acknowledging that I was a firefighter, and that I liked the flames. Then I smelt burning, and realised she had set fire to the floor. She then ran away.’ 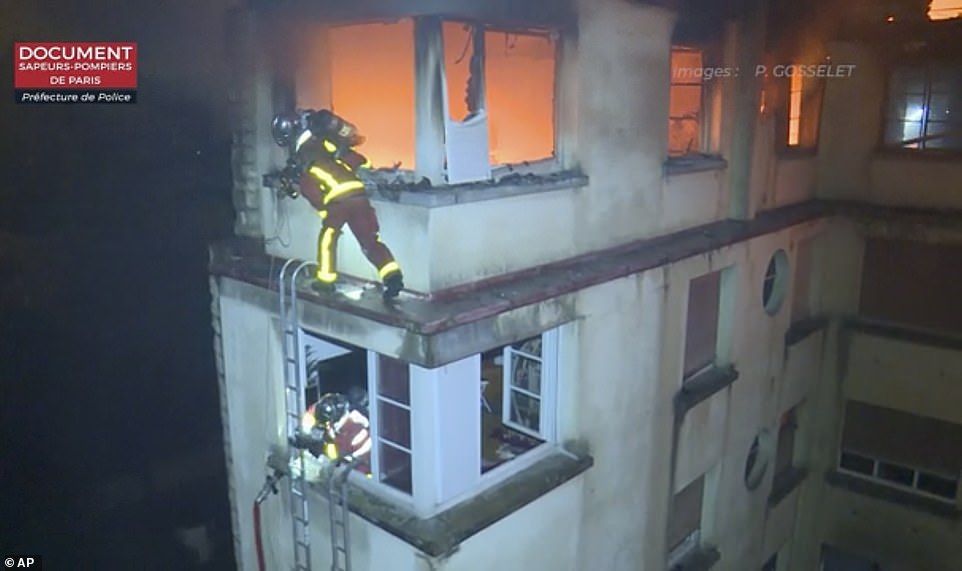 Rescue mission: Some of the estimated 200 Paris firefighters working to extinguish the blaze and rescue residents are seen scaling the exterior of the building 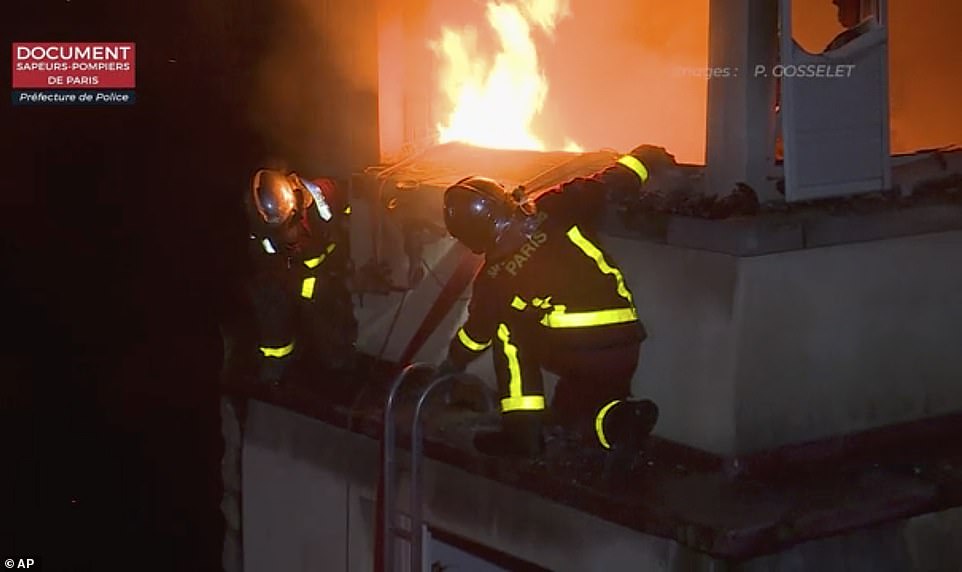 In this image taken from video released by the Paris Fire Department, firemen scale the top floors of the building on fire 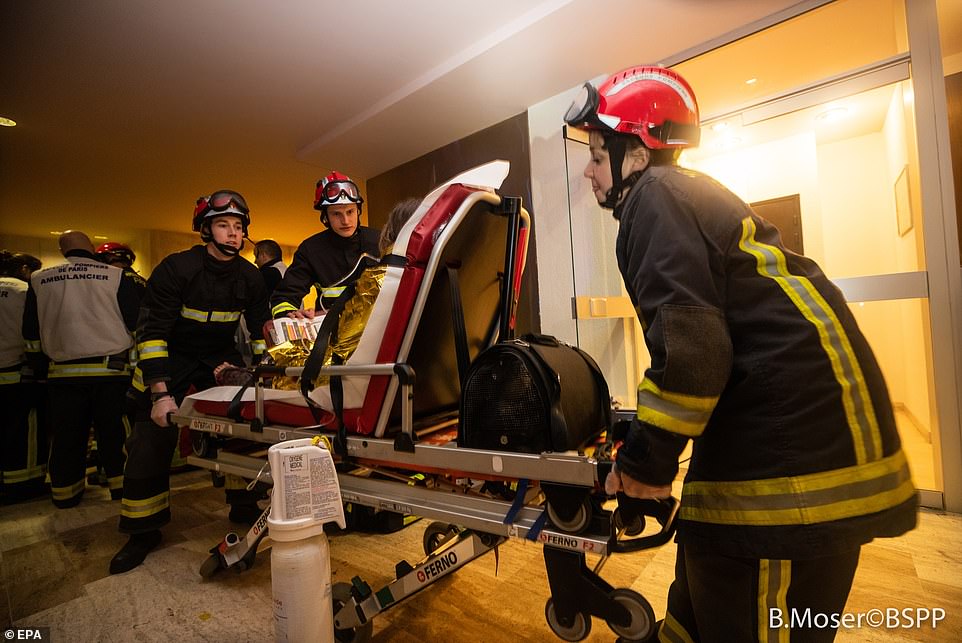 Three people died after falling or jumping from the building, Le Figaro reports.

Prosecutor Remy Heitz told reporters Tuesday an investigation has been opened into the criminal charge of causing death by arson.

He said the arrested woman was in her 40s, and had been under treatment ‘for psychological problems’.

‘Her T-shirt was smouldering, but she was in the process of starting more fires,’ said a source connected to the local BAC anti-criminal brigade, which made the arrest.

Following her arrest, the woman who was drunk at the time of arrest, was taken to a nearby hospital suffering with physical injuries caused by the fire.

‘She has psychological problems, and had been drinking heavily at the time of the fire,’ said a source close to the enquiry.

‘She was being treated at a local psychiatric unit, but was still living in the block where she is thought to have started to fire. She was involved in regular arguments with other neighbours, who often complained about her behaviour.’ 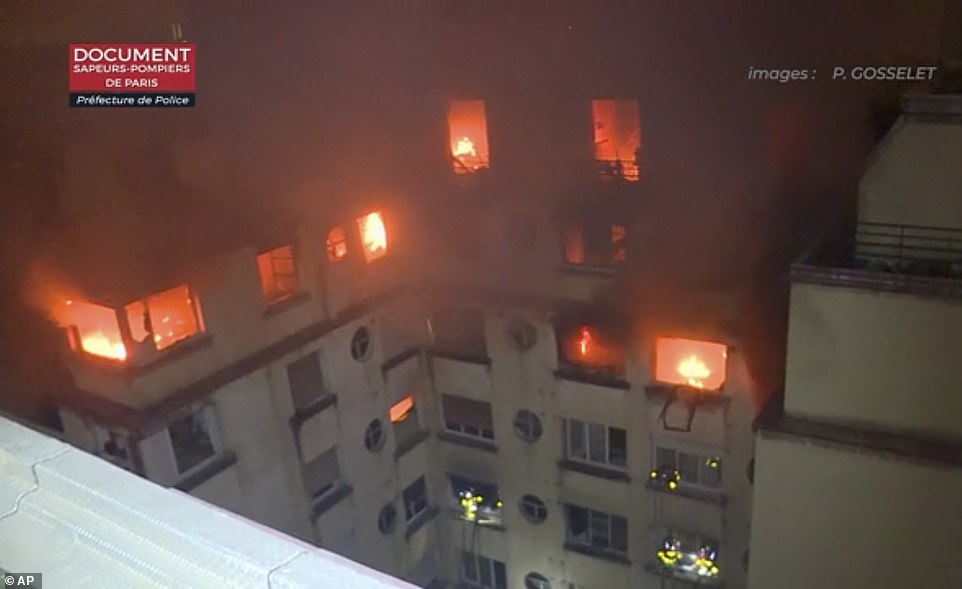 An investigation has been opened into the criminal charge of causing death by arson, a Paris prosecutor said 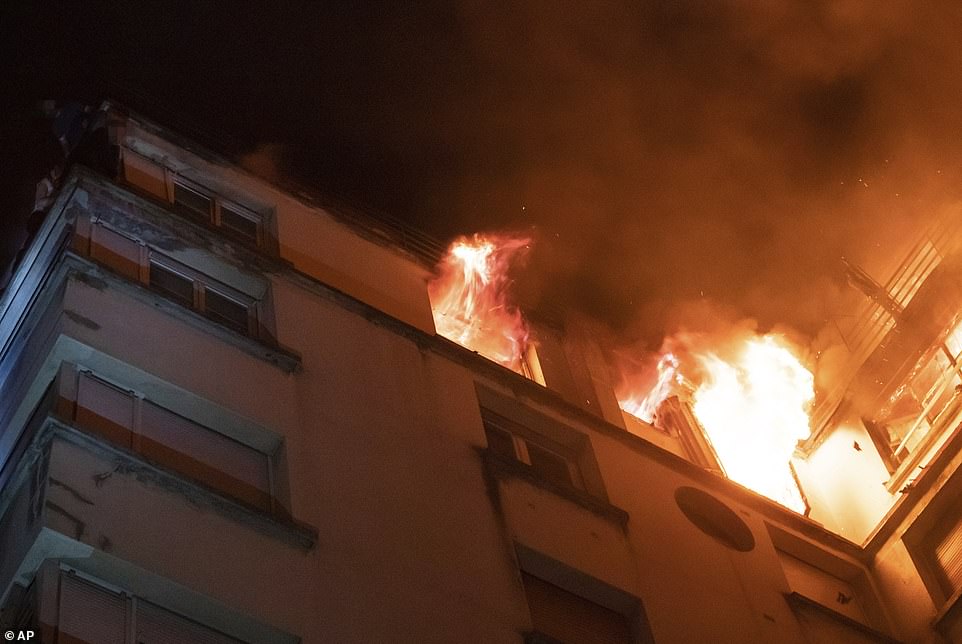 The fire broke out in the early hours of Tuesday morning, and continued into the morning before it could be extinguished 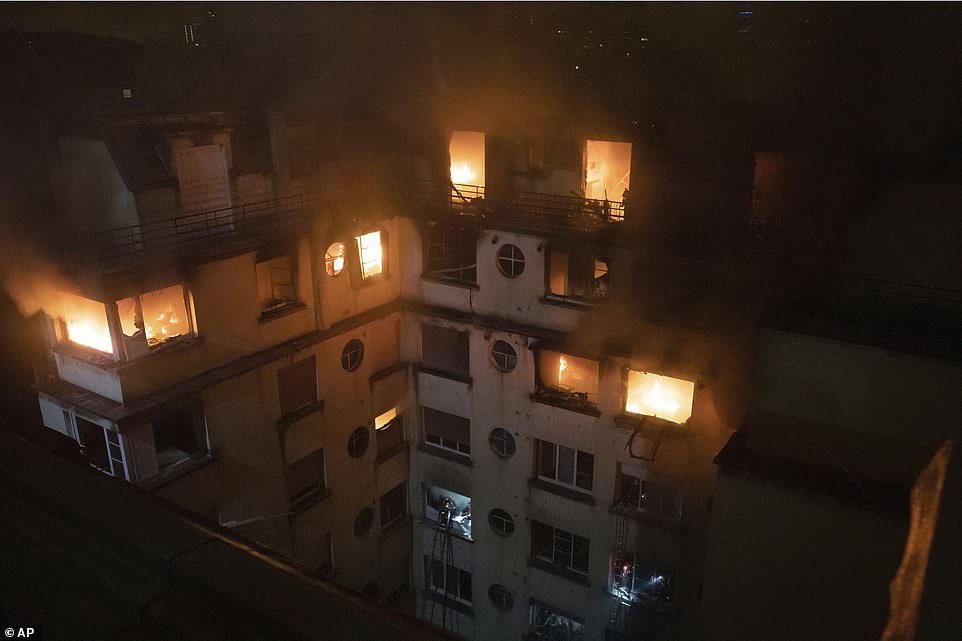 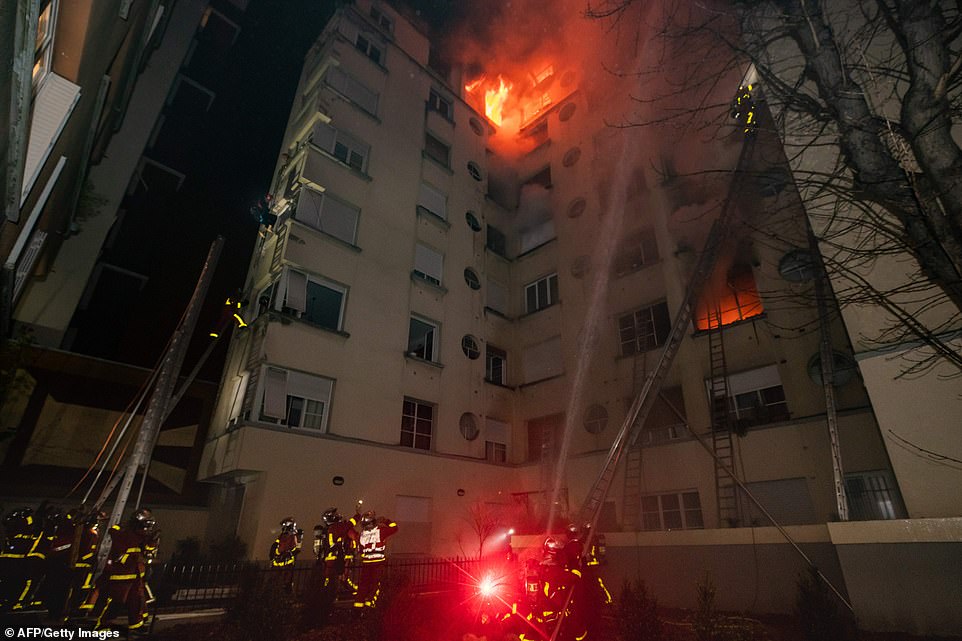 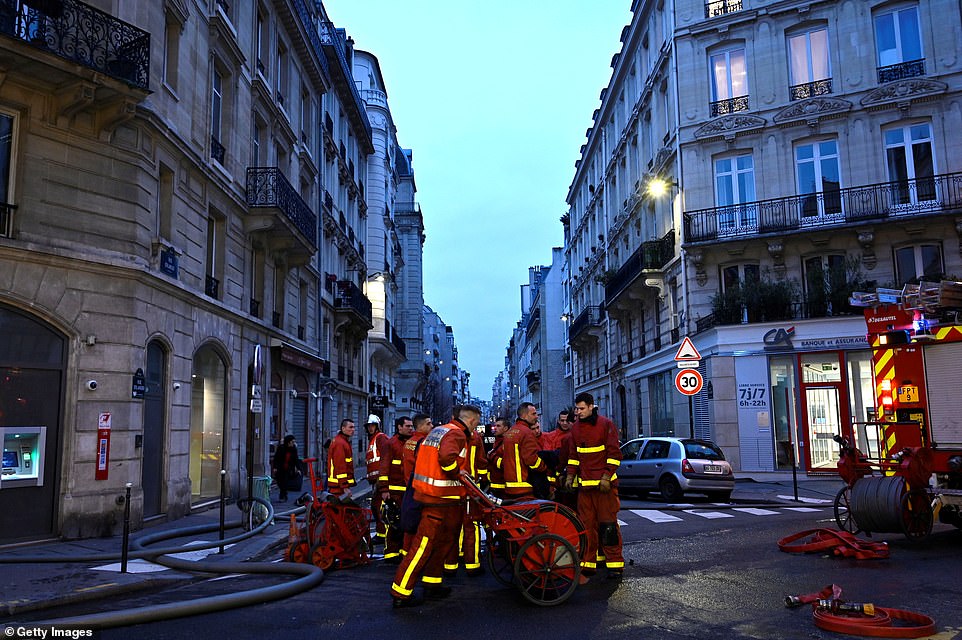 Firefighters work on the Erlanger street after a fire in a building on the 16th arrondissement in Paris, France

Emmanuel Grégoire, one of the deputy mayors of Paris, said the woman had told police of a ‘quarrel between neighbours’.

‘We will let the police give additional information, but this is one of the theories being explored by investigators,’ Mr Grégoire said according to The Local.

More than 200 firefighters worked through the night to extinguish the fire, which started in the early hours of Tuesday, and were able to rescue 50 people from the flames.

The building is located on an inner courtyard, meaning firetrucks were unable to drive up to the building, and firefighters were forced to carry ladders to be able to reach stranded residents.

Fire service spokesman Clement Cognon said firefighters are continuing to search apartments to see if there are any other victims and ensure that no residual fires break out.

Emergency workers are also working to ensure the building doesn’t collapse from the fire damage.

A witness to a Paris apartment fire says she saw flames shooting out for hours from the top of the building and smoke-covered victims fleeing.

Jacqueline Ravier, who lives across the street from the building hit by Tuesday’s fire, said ‘I heard a woman screaming in the street, crying and screaming for help.’ 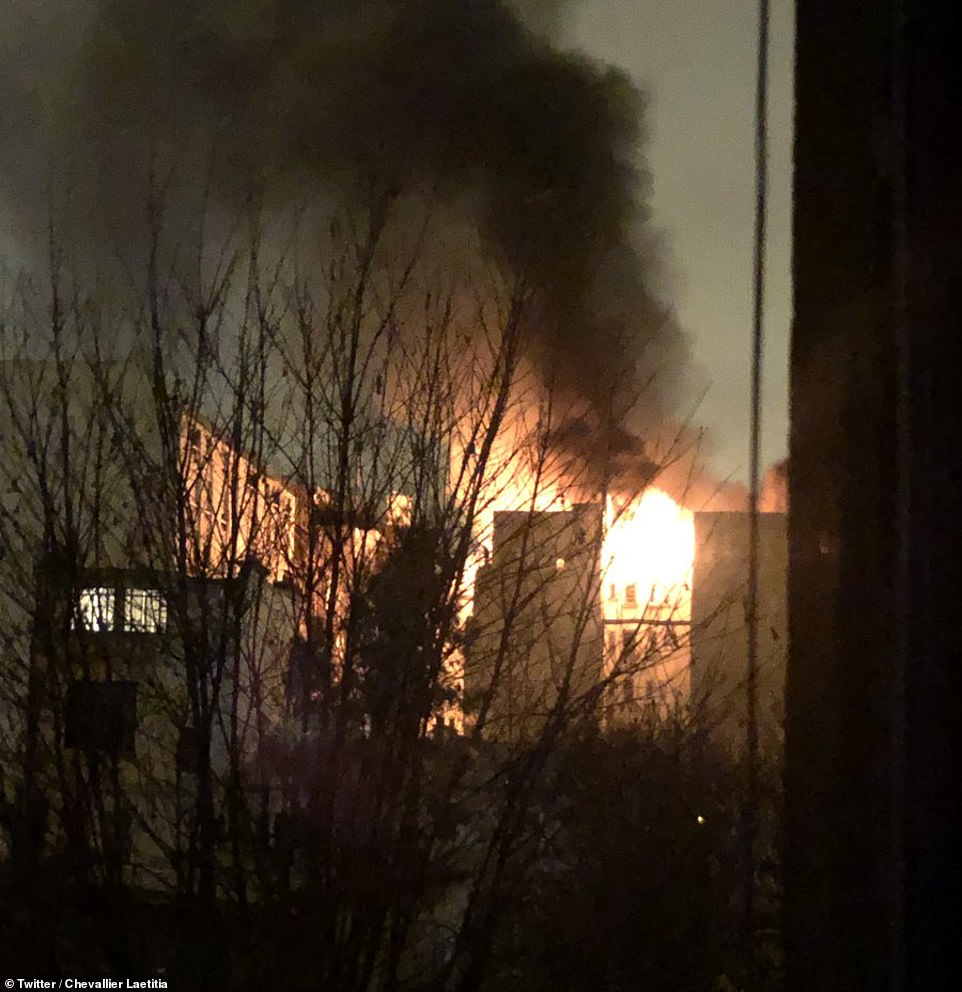 Fire crews said that the apartment block and surrounding buildings had been evacuated by 3.30am 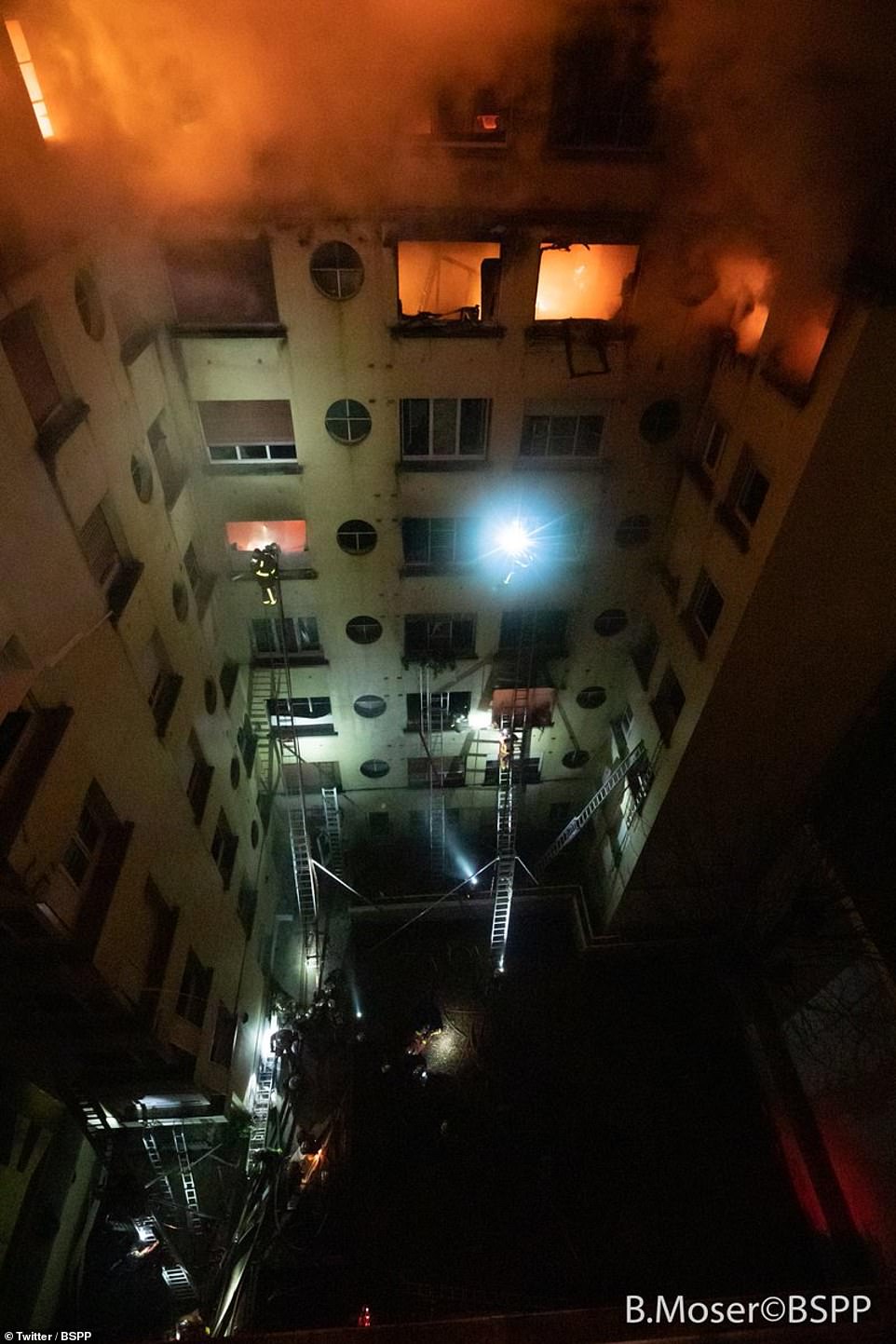 Some of those affected scrambled on to nearby roofs to escape the flames, and needed to be rescued by fire crews

She said shaken, evacuated residents were brought to her building and the one next door while firefighters continued to fight the flames.

She described seeing ‘a young man in his underwear,’ blackened by smoke, and a woman motionless on the ground outside.

‘We feel the smoke,’ she said. ‘What’s surprising is how long it lasted.’

The building is less than a mile from the Roland Garros stadium that hosts the French Open tennis tournament, and close to the popular Bois de Boulogne park on the city’s western edge.

More than 200 firefighters and emergency workers are on the scene, Paris police said, and the street is blocked off. 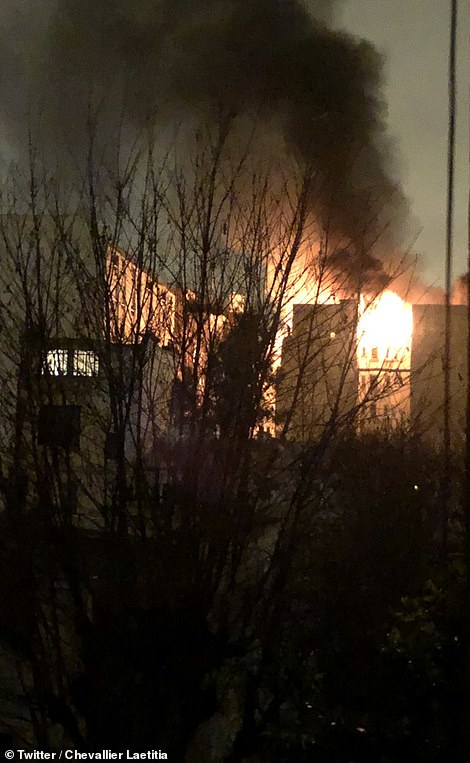 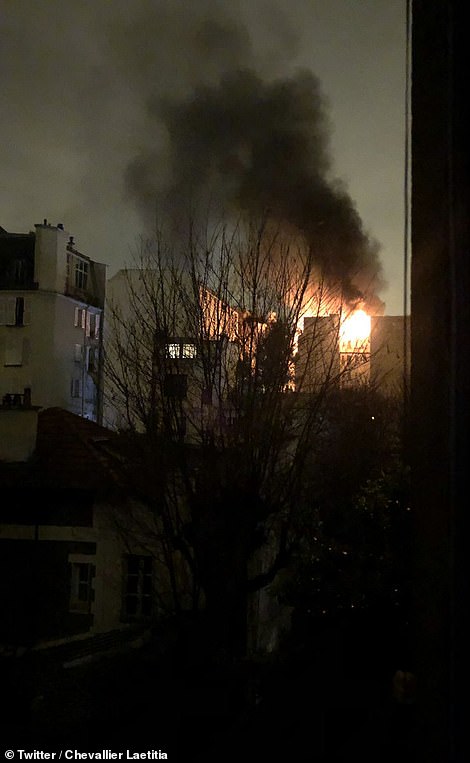 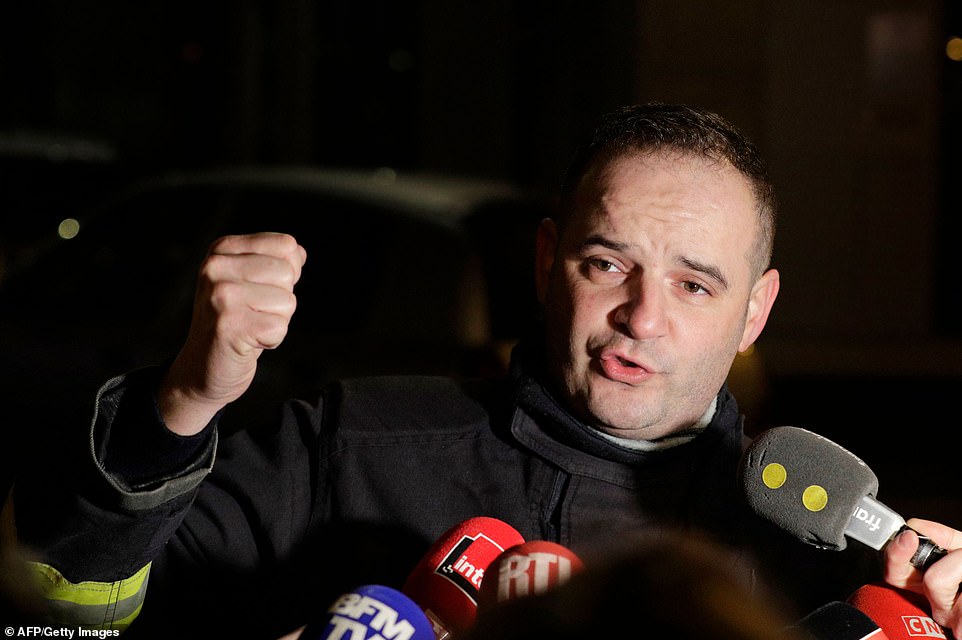 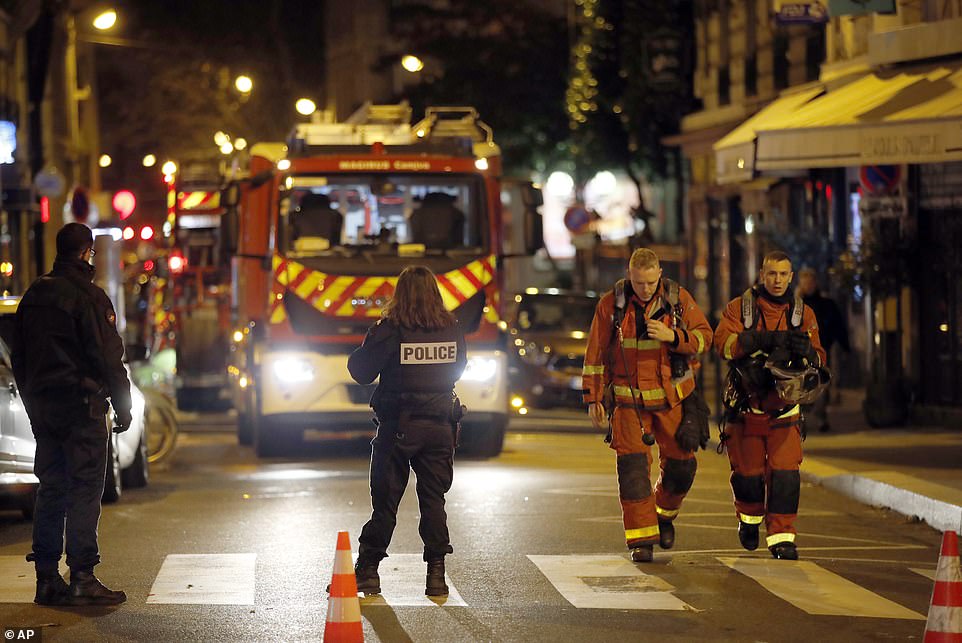 Firefighters and policemen stand on the scene of the fire in Paris, in the early hours of Tuesday 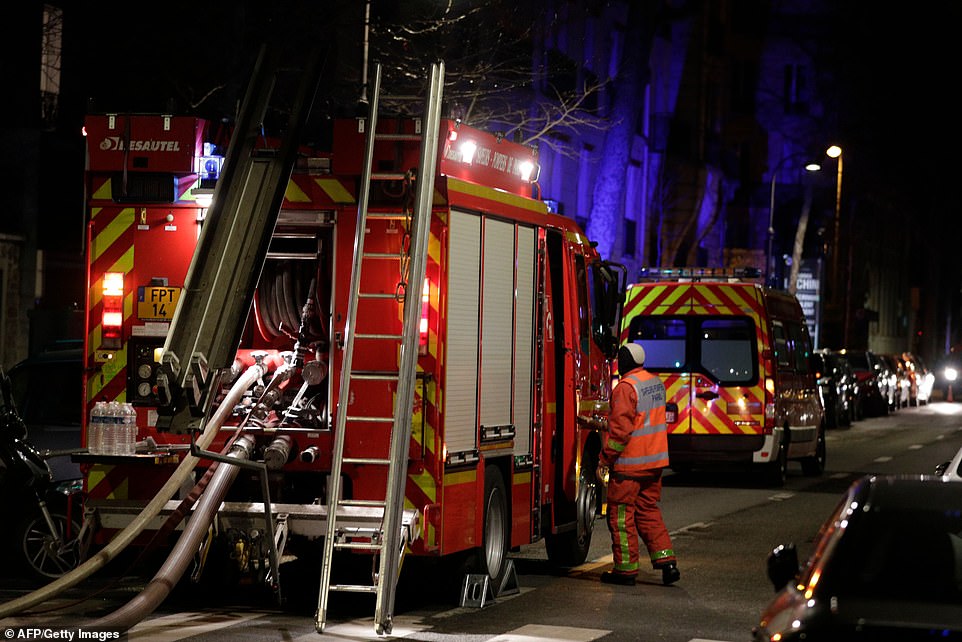 The fire comes a month after a deadly explosion and blaze linked to a gas leak in a Paris bakery.

The 16th arrondissement is one of the most luxurious districts of Paris.

‘The toll could still increase because the fire is still in progress on the 7th and 8th floors’ of the eight-storey block, a fire service spokesman told a reporter at the scene.

Some of those affected scrambled on to nearby roofs to escape the smoke and flames, and needed to be rescued by fire crews.

With landmarks including the Trocadero overlooking the Eiffel Tower, Paris Saint-Germain’s home stadium the Parc des Princes, the picturesque Bois de Bologne and an array of upmarket shops and restaurants, the area is popular with tourists.

Mr Cognon said earlier: ‘We had to carry out many rescues, including some people who had taken refuge on the roofs.’