The sisters appeared to be loving the spotlight while flashing wide smiles and posing for a few glammed-up shots during the event.

Paris and Nicky are known for their closeness, and the younger of the pair previously spoke about supporting her older sister’s documentary.

Paris sported a draping black dress that obscured her shapely frame during the event.

The 40-year-old fashion industry personality also wore a pair of stylish high-heeled shoes that matched the shade of her outfit.

She accessorized with a large pair of tinted sunglasses and a set of sparkling lace gloves that were slightly transparent.

Her platinum blonde hair draped onto her shoulders and backside and added a bit of brightness to her largely monotone outfit. 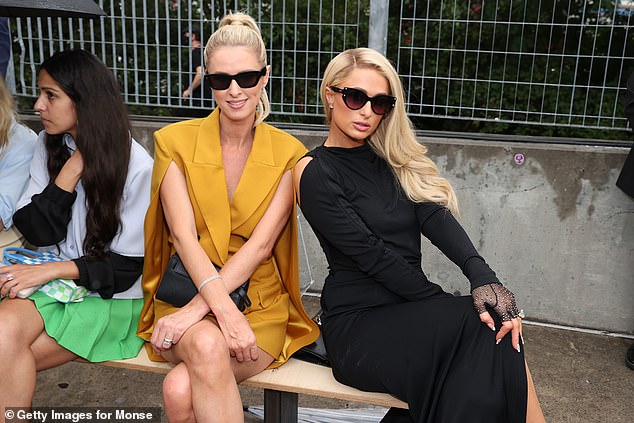 Keeping it simple: Paris opted for a draping black dress that obscured her shapely frame while spending time with her sister 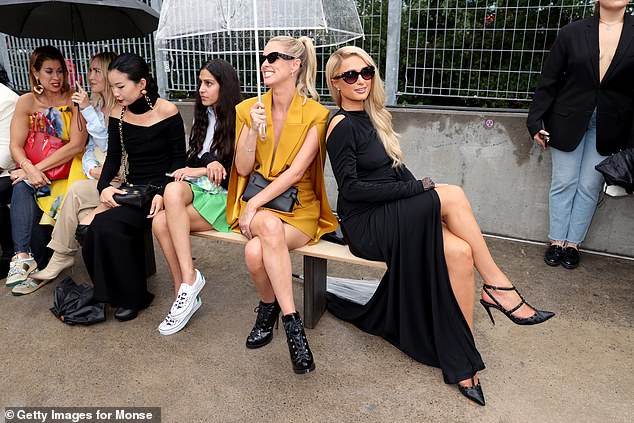 Pairing well: She also wore a matching set of high-heeled shoes during the fashion show

At one point, Hilton was seen carrying a chic leather clutch bag while posing for a shot with her sister.

Nicky wore a mustard-yellow and double-breasted jacket dress that showed off her toned legs while spending time with her older sister.

The 37-year-old socialite contrasted her main article of clothing with a pair of shining leather heeled shoes.

She also sported a set of stylish dark sunglasses that paired well with a small purse that she kept with her. 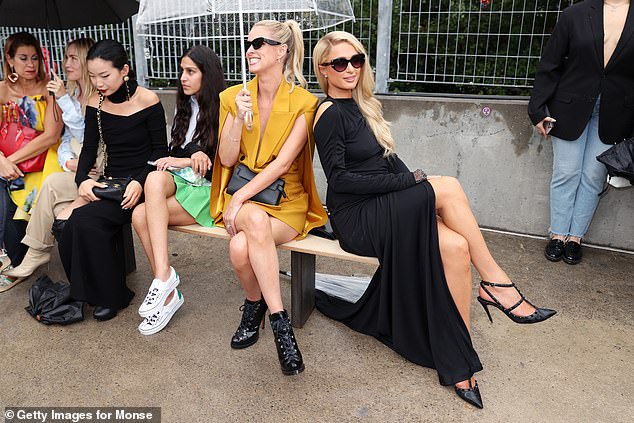 Stylish socialite: Nicky opted to wear a double-breasted jacket-dress and a set of heeled shoes during the fashion show

Her beautiful blonde hair was tied back into a loose ponytail during the event.

At one point, she was seen holding up a transparent umbrella to keep herself protected from the downpour.

Nicky previously spoke about watching Paris’ documentary, This Is Paris, with her sister during an interview with E! News.

During the sit-down, the socialite noted that she and her sibling viewed the feature without anyone’s knowledge. 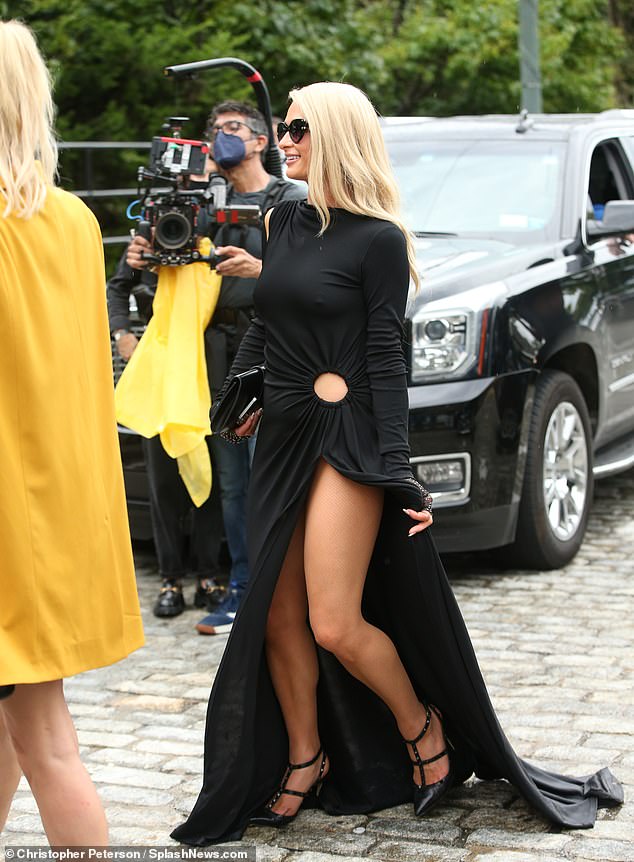 Doing it together: Nicky previously spoke about watching Paris’ documentary, This Is Paris, with her sister 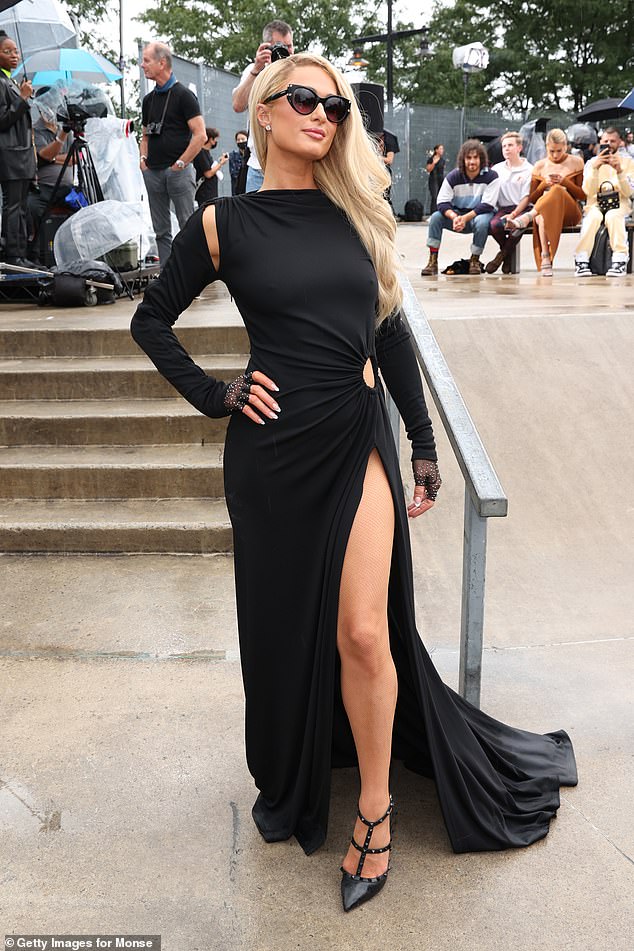 First look: The socialite pointed out that she and her sister watched the feature without their mother’s knowledge

‘It was very, very emotional. We watched it for the first time. She didn’t even want to show my mother the movie. So we snuck downstairs and we were watching it together,’ she recalled.

The designer then expressed that she was impressed with her sister for being so emotionally open with her emotions and memories.

‘We laughed. We cried. I’m just so proud of her, because going through so much trauma and reliving it with the whole world watching is very brave,’ she expressed.

Nicky then noted that the public’s response to the feature was overwhelmingly positive, as they were able to relate to the fashion industry personality. 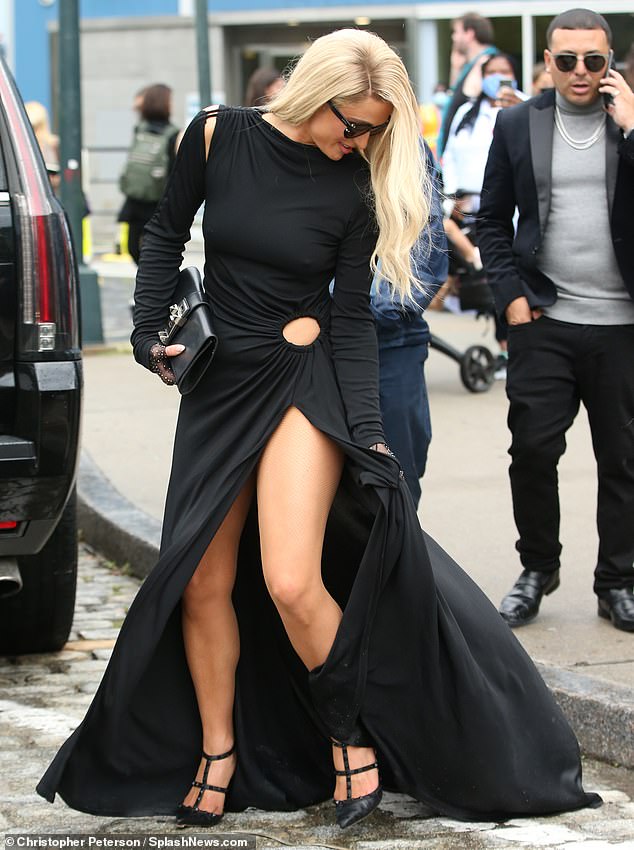 Feeling good: Nicky also told E! News that she was ‘just so proud of’ Paris after the documentary’s release 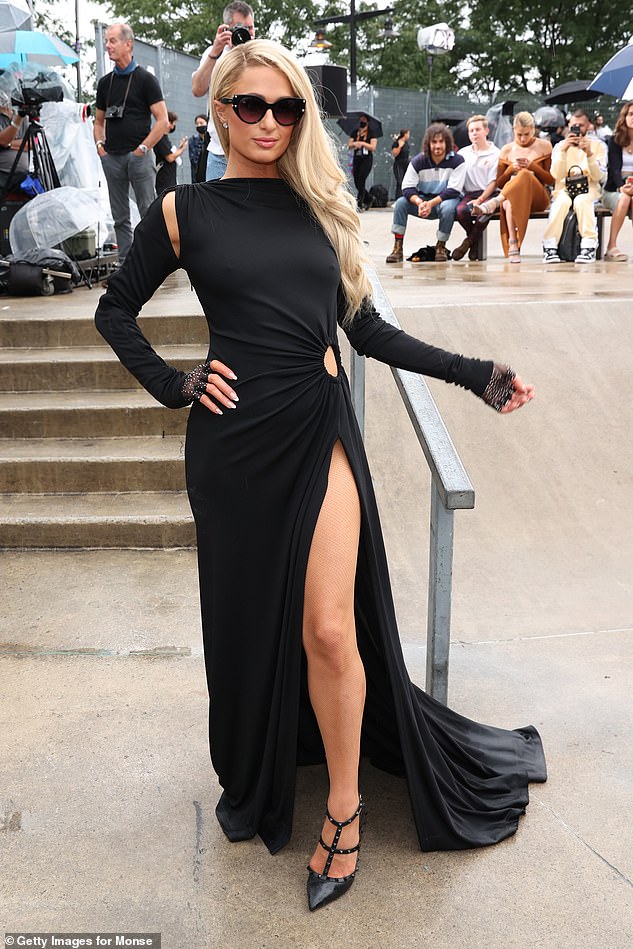 High praise: The fashion designer described her older sister as ‘very brave’ for appearing in the feature

‘I’ve got so many messages today from people I know who’ve been through similar things, from strangers saying, “I’m so happy that I don’t feel alone anymore.” I’m so thrilled that she did it,’ she said.

The businesswoman also pointed out that she was impressed with Paris for being as open as she was in producing the movie.

She added, ‘I think a lot of people were shocked and just seeing her allow herself to be so vulnerable without the glam team and just so raw.’

Monse is a fashion label that was founded by two creative directors at Oscar De La Renta in 2015. 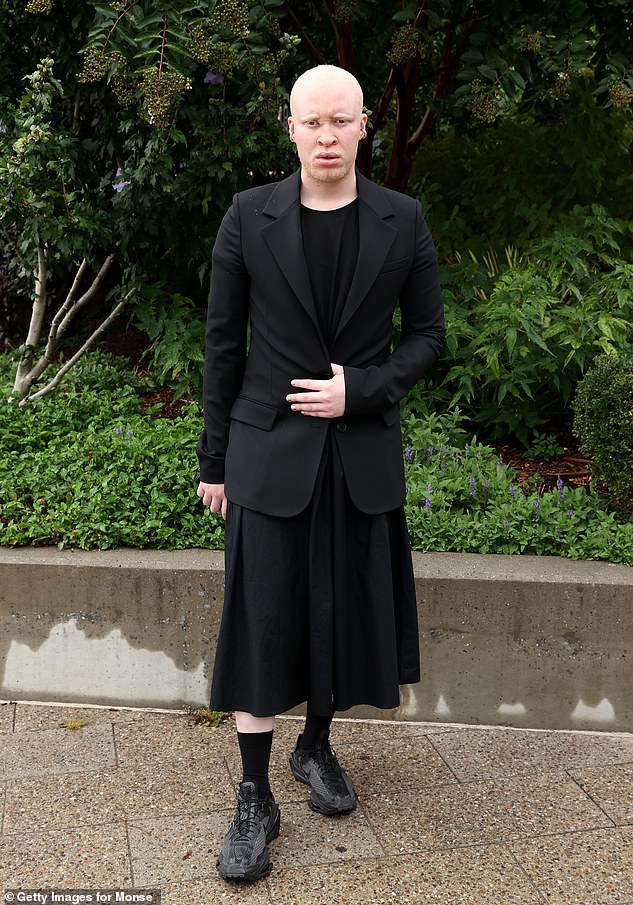 Serious lineup: Numerous other fashion and entertainment industry personalities were spotted at the Monse Resort 22 show

Numerous other fashion industry personalities were seen at the event, including model and actor Shaun Ross.

The 30-year-old performer sported a tight-fitting black suit jacket while spending time at the show.

The recording artist notably wore a matching dress that covered up much of his form during the function.

The fashion industry figure finished off his all-black ensemble with pairs of socks and athletic shoes. 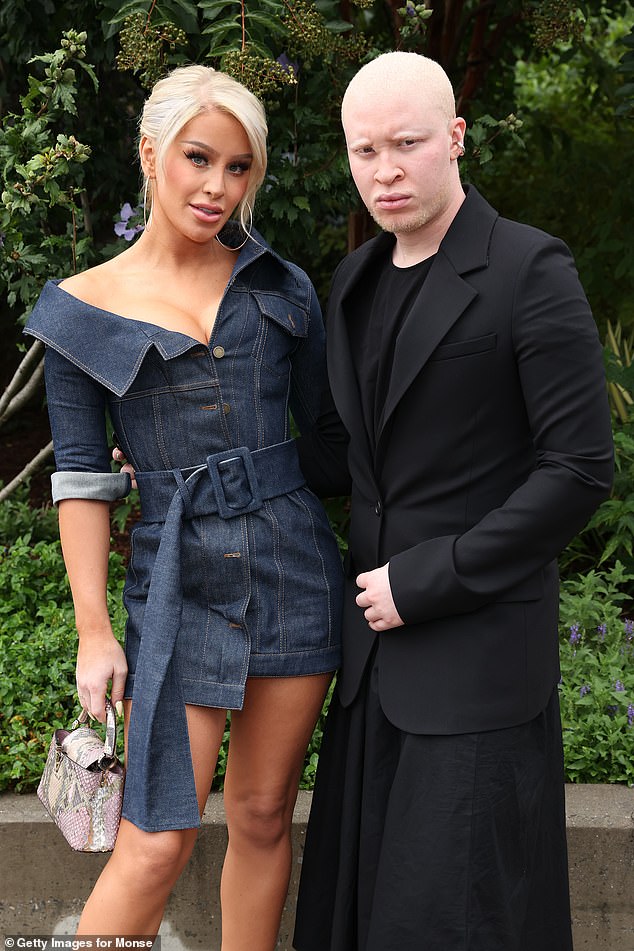 Keeping it simple; Shaun Ross sported an all-black outfit that included a tight-fitting sports coat during the show 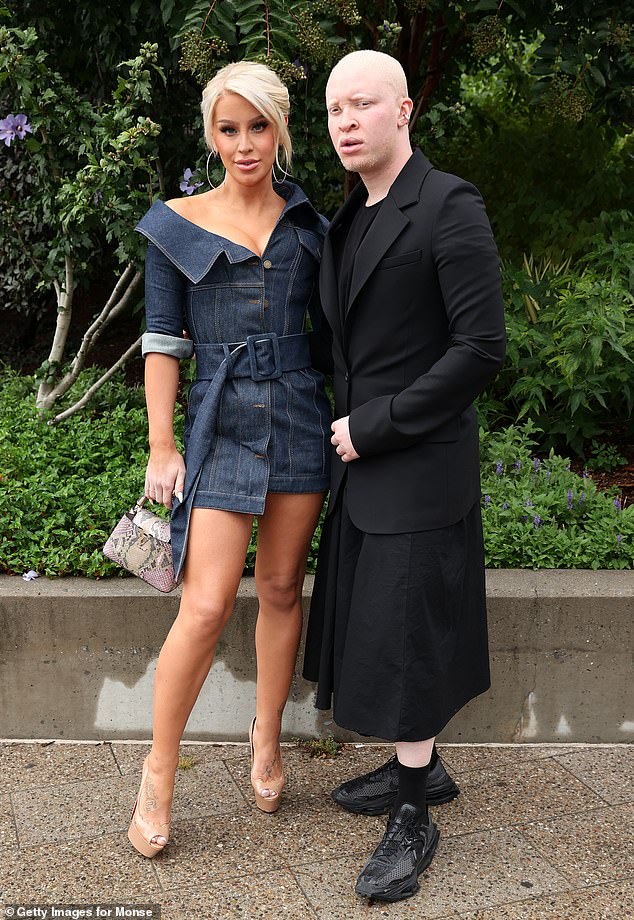 Covering up: The model and actor also wore a draping dress that matched his outerwear

Ross was also pictured spending time with Gigi Gorgeous Getty at the event.

The 29-year-old YouTube personality wore a stylish denim dress that exposed her toned legs at the function.

She also wore a pair of light brown high-heeled shoes and carried a patterned purse with her during the show. 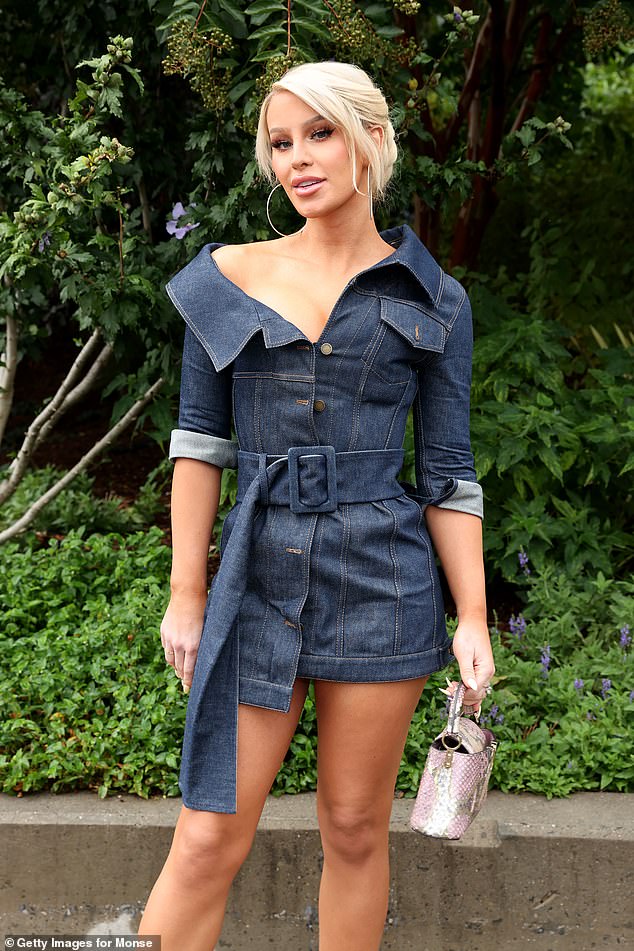 Keeping it comfy: Gigi Gorgeous Getty wore an all-denim dress while posing for a few shots

Aly and AJ Michalka were pictured holding hands during the show, and the 32-year-old singer wore a draping black dress while spending time with her sibling.

The performer notably complimented the dark shade of her outfit with a set of platform dark leather boots.

Her younger sister, 30, sported a white button-up shirt that featured several strands of fabric running down its front portion.

The singer also rocked a pair of black trousers with large slits running up their front sides. 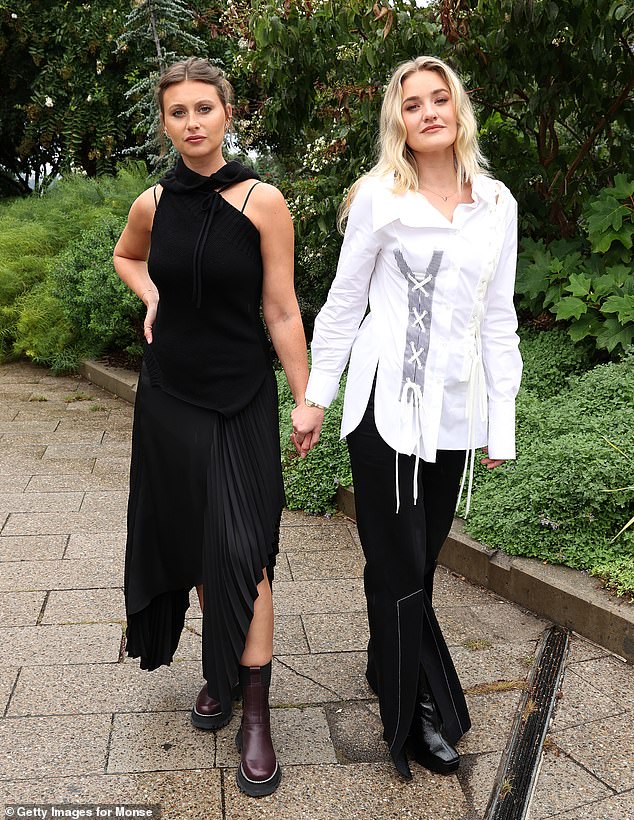 Better together: Aly and AJ Michalka were pictured holding hands while spending time at the event

James Harden stayed dry in a bright yellow hoodie that was contrasted with a black t-shirt as he spent time in the rain.

The 32-year-old professional basketball player also sported a set of pants with a camouflage-like pattern during the event.

Diplo also dressed for the weather, as he wore a large green raincoat while posing for a quick snap.

The 42-year-old music producer opted for a pair of black pants and white athletic shoes that contrasted well with his outerwear.

Sabrina Harrison cut a seriously stylish figure in an all-baby blue outfit during the fashion show.

The designer added several elements of shine to her outfit with numerous pieces of jewelry, as well as a sparkling purse.

E.J Johnson opted for a leopard print Christian Dior hoodie with a matching skirt and headband, and he sported a pair of black leather shoes.

The reality television personality also wore a pair of vintage sunglasses and a carried a matching purse with him during the event. 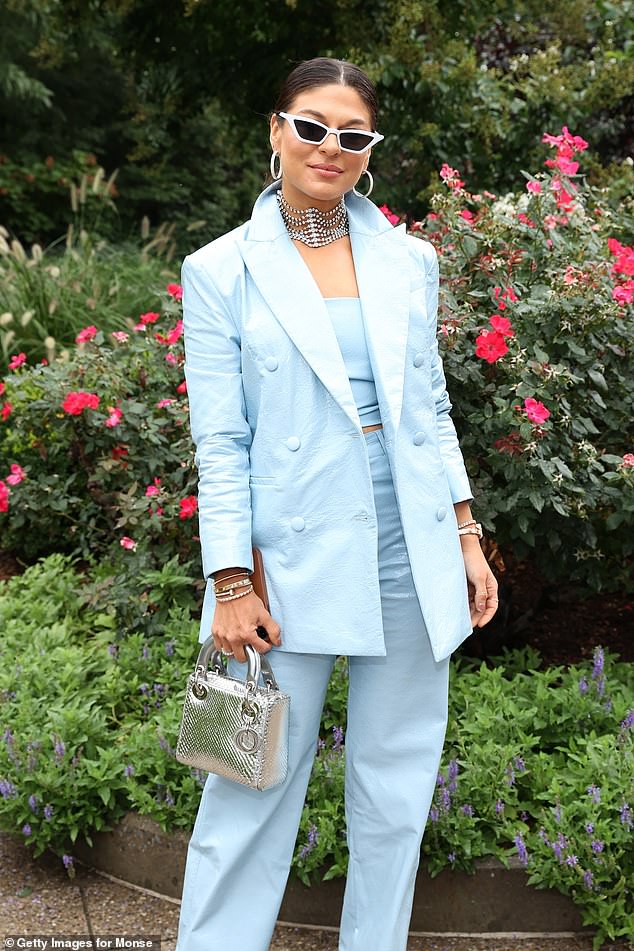 Standing out: E.J Johnson wore a leopard-print Christian Dior hoodie and a matching skirt during the event. He also sported a pair of leather heeled shoes and carried a matching purse

Earlier in the day, the Hilton sisters were seen spending time together at the Revolve Gallery event.

Nicky opted for an off-shoulder dress and sported a set of black high-heeled shoes. 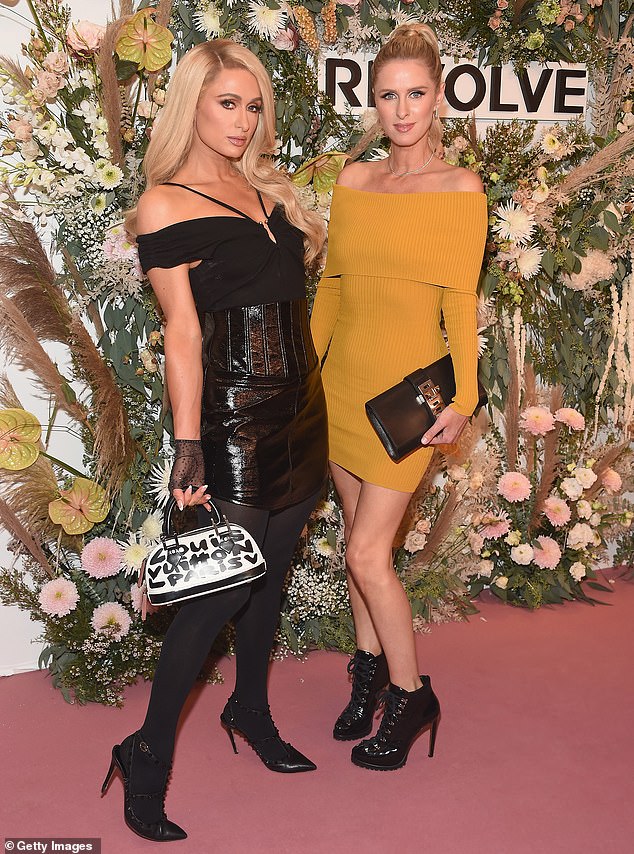 Making an appearance: The Hilton sisters were both seen wearing eye-catching outfits during the Revolve Gallery event earlier in the day