The Moulin Rouge in Paris will be high-kicking its way back on stage in September, it announced with a flourish on Monday, after the longest shut down in more than a century.

The first cancan of the post-pandemic era is due to take place on September 10 under the iconic windmill in Montmartre.

Twelve dancers, in matching masks and feathers, braved the morning chill outside the Moulin Rouge on Monday to reveal the opening date stitched into their dresses, much to the surprise of passing motorists on the Boulevard de Clichy.

It comes as France, which recorded 15,685 new daily Covid-19 cases on Saturday, prepares to reopen its hospitality sector in two days time.

Paris’ Moulin Rouge has announced it will reopen its doors on September 10 2021. The burlesque establishment has been closed since March 12 2020 due to the coronavirus pandemic. Dancers in costumes announced the reopening date today, pictured

‘It feels so good to finally have a date. We are desperate to see our audiences again.

‘The first cancan of the restart will be something else. It’s a very technical number and after a break of more than a year, we will have to rehearse very hard this summer.’

Like the other 60 members of the cast, Tutiaux was forced to train alone at home during the shutdown, using her kitchen work surface to stretch. 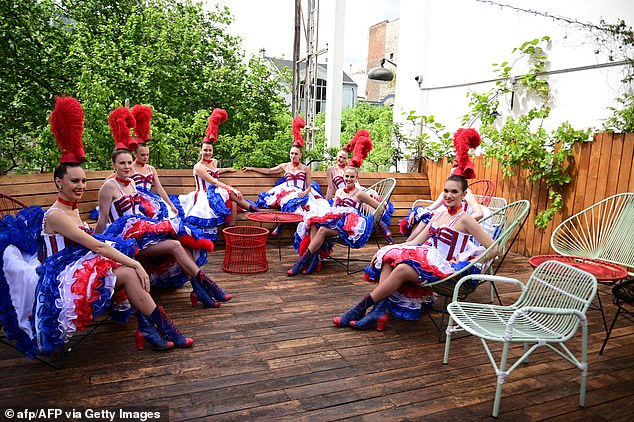 The dancers, pictured, were delighted to announced they’ll finally be back to work in September. The pandemic saw the famous windmill close its doors for the longest period since it was destroyed by a fire in 1915

The Moulin Rouge has been shut since March 12, 2020 – the longest closure since the theatre was destroyed by fire in 1915.

‘Today, the planets are aligning. We are pleased to be working on this restart,’ said Jean-Victor Clerico, director general of the Moulin Rouge.

‘If everything goes well, there won’t be any distancing even inside. There are still some unknown factors. If one-metre (three feet) distancing is still needed, we will have to reduce capacity to 50 percent.’

The other renowned centres of Parisian ‘nude chic’ will reopen around the same time: Crazy Horse on September 9 and Le Lido on September 16.

With infection rates falling and vaccine rates rising, France is set to reopen many cultural sites on Wednesday after a six-month shutdown that began during the second wave of the pandemic in late October only to be extended through the spring as a third wave hit the country. 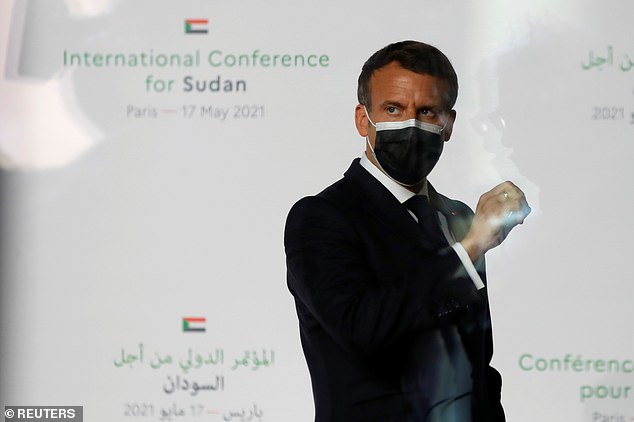 Emmanuel Macron, pictured at the International Conference for Sudan in Paris today, announced a four-stage roadmap out of the pandemic for France, with the hospitality secto reopening outdoors on Wednesday 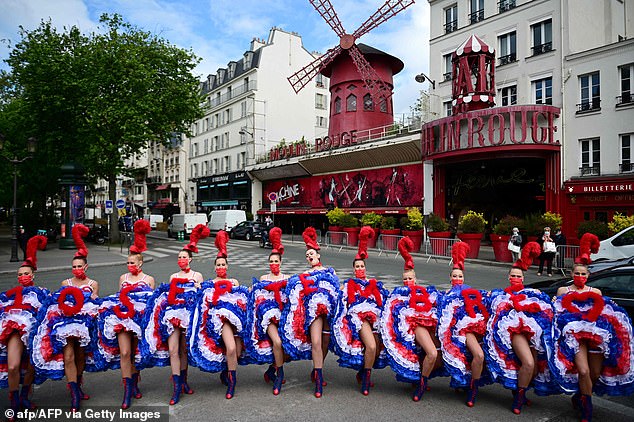 Dancers of the Moulin Rouge revealing the reopening with letters embroidered on their blue, white and red costumes today

With 15,685 active daily cases recorded on Saturday, Macron’s government is doubling-down on its determination to go back to normal before the summer.

A ‘test-concert’ has been planned in Paris on May 29, which will see 5,000 masked attendees selected at random rock it out without social distancing at a concert by French band Indochine at the Accor Arena.

Attendees will have to take a test before and after joining the concert, and the results will be carefully monitored with results published at the end of June.

The organisers, in partnership with the Hospitals of Paris association,. have stressed that the event is no normal concert, but a clinical test.

A similar event due to take place in the southern city of Marseilles was cancelled.

Cancan you believe it? France’s nightclubs won’t reopen until later, with the current curfew being lifted completed on June 30 (pictured: The Moulin Rouge dancers) 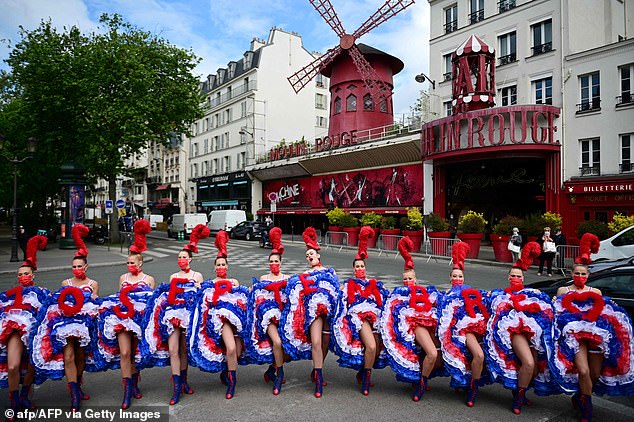 Yes we cancan! The dancers, pictured, had to train alone at home during the pandemic and are looking forward to getting back to work

French President Emmanuel MAcron announced that a total of 20.117.206 people – equating to 30 per cent of the country’s population – have received at least one vaccine jab in France since December 2020.

9.464.274 people have received their second jabs after the country accelerated its vaccination campaign, administering 480 000 injections a day.

The French governments hopes the number of people to have received at least one injection will increase to 30 million by June.

Emmanuel Macron has announced a four-stage roadmap out of lockdown for France, with restriction set to ease from Wednesday 19 May with bars, cafes and restaurants serving outside and a 7pm curfew being relaxed and pushed back to 9pm (8pm GMT).

Non-essential shops, cinemas, museums and theatres will be able to open to a restricted number of visitor.

A health pass will be introduced, allowing vaccinated people to attend sporting and large events.  Foreign tourists will be able to travel to France with a ‘health pass’ from June 9.

Details on how the health pass will be implemented are yet to be released.

‘The health pass should not be mandatory for access to everyday things such as restaurants, theatres and cinemas or to go see friends,’ Macron said.

‘But for places with big crowds, such as stadiums, festivals, trade fairs or exhibitions, it would be absurd not to use it.’

That same day, the curfew will be pushed back to 11pm, before being scrapped completely on June 30 – but nightclubs won’t be allowed to reopen then.

France entered a third lockdown on April 3 after it recorded a surge in cases. It is estimated the number of cases per week fell from 40,000 to 27,000 in recent days.

French lab Sanofi, working hand-in-hand with British partner GSK, has announced today that the second phase of its covid vaccine had been a success following setbacks in late 2020.

It revealed it would be starting the third phase of the vaccine’s development in the upcoming weeks.