Paris Saint Germain continued their dominance at the summit of Ligue 1, comfortably sweeping aside Nice helped largely by an inspired performance from Edinson Cavani.

In the absence of Neymar – watching on from the stands after recently picking up a red card – Cavani wasted no time in getting his side ahead, reacting first as a near post freekick was whipped in after just two minutes played.

Angel Di Maria’s curling approach was met by Cavani, who peeled away from his marked and send a diving header crashing inside the near post. 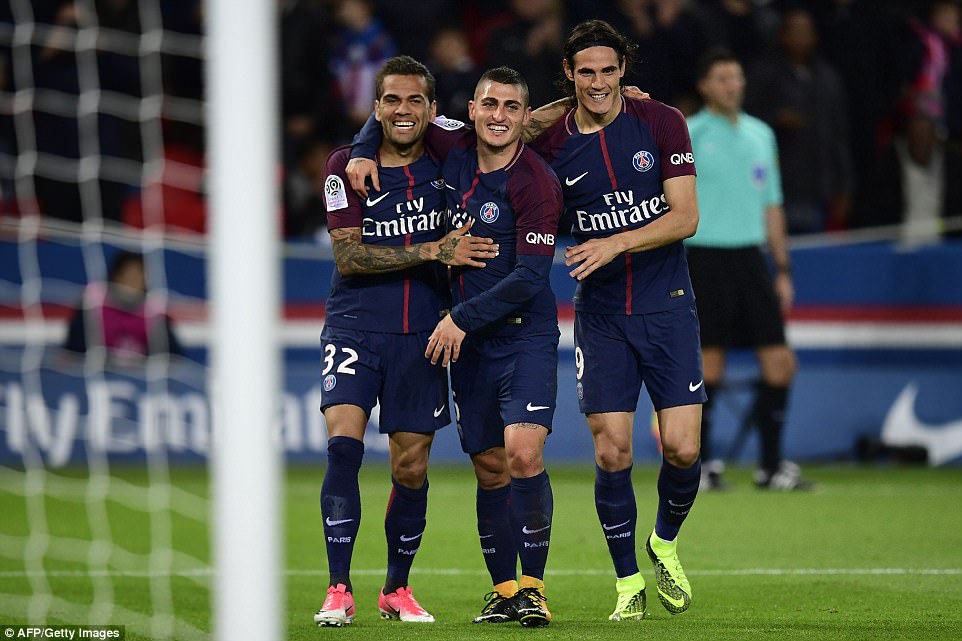 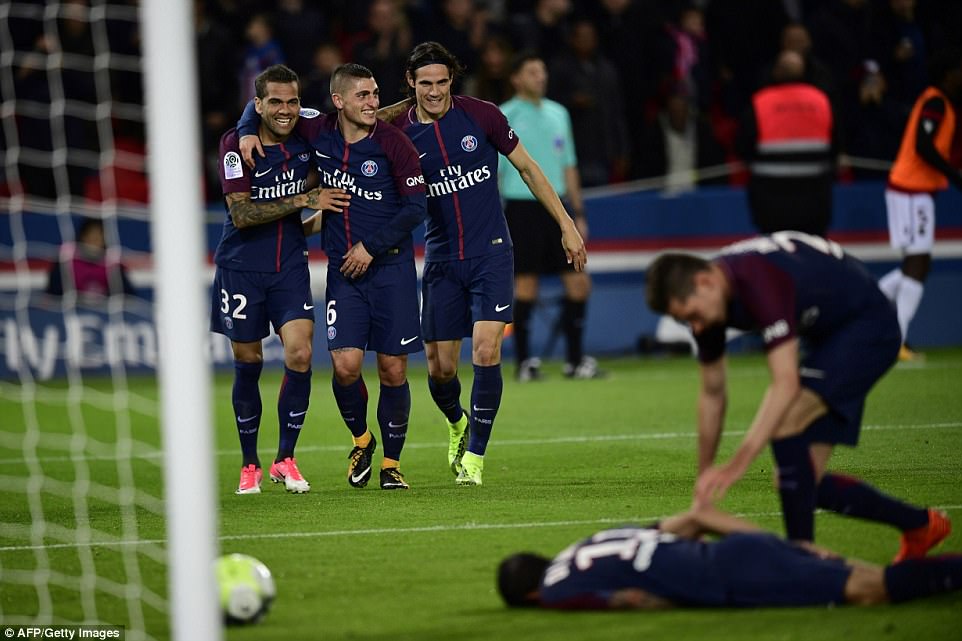 Angel Di Maria lies on the floor in a heap after colliding with Alves in attempt at poking in the goal, but was able to play on 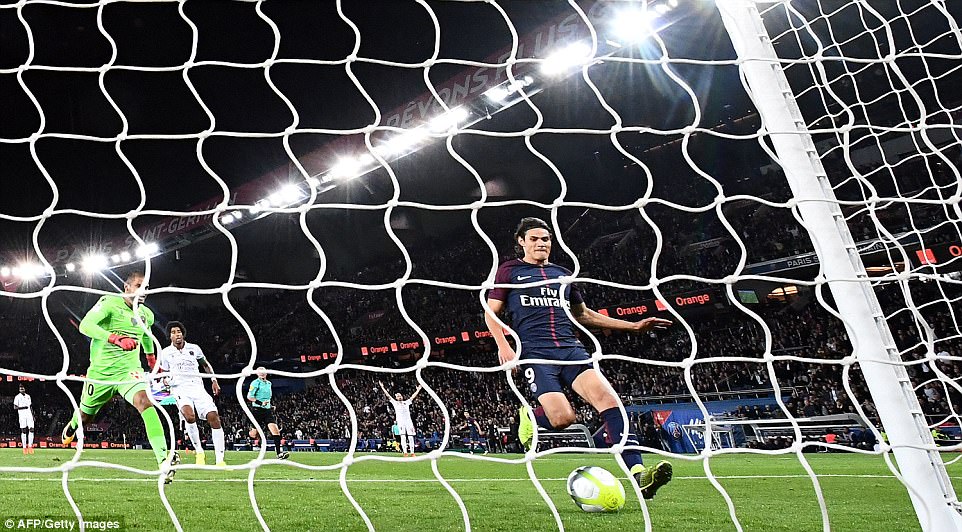 After staying onside and timing his run, Cavani rounds the goalkeeper and slots the ball into an empty goal for PSG’s second 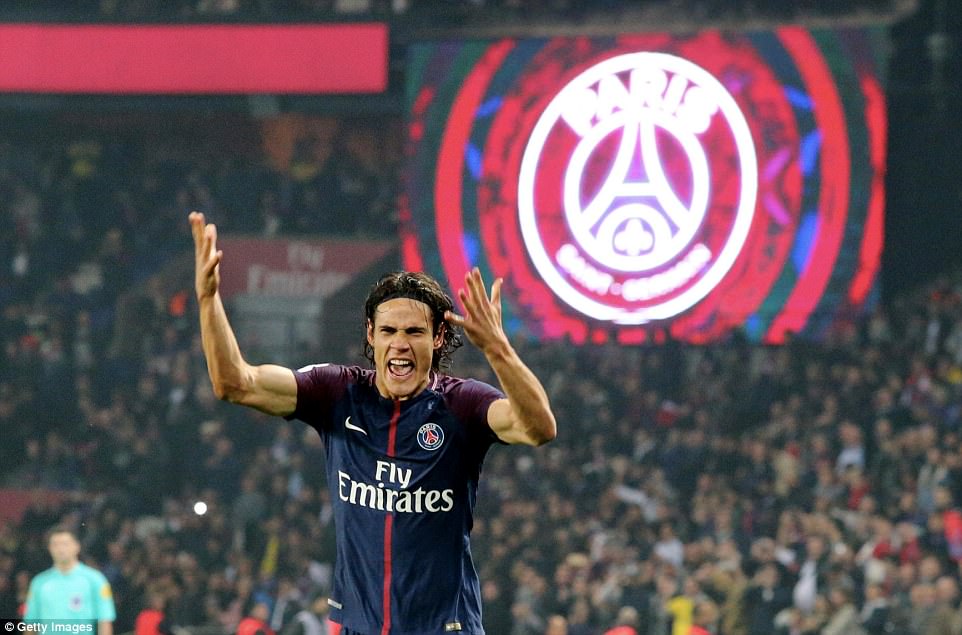 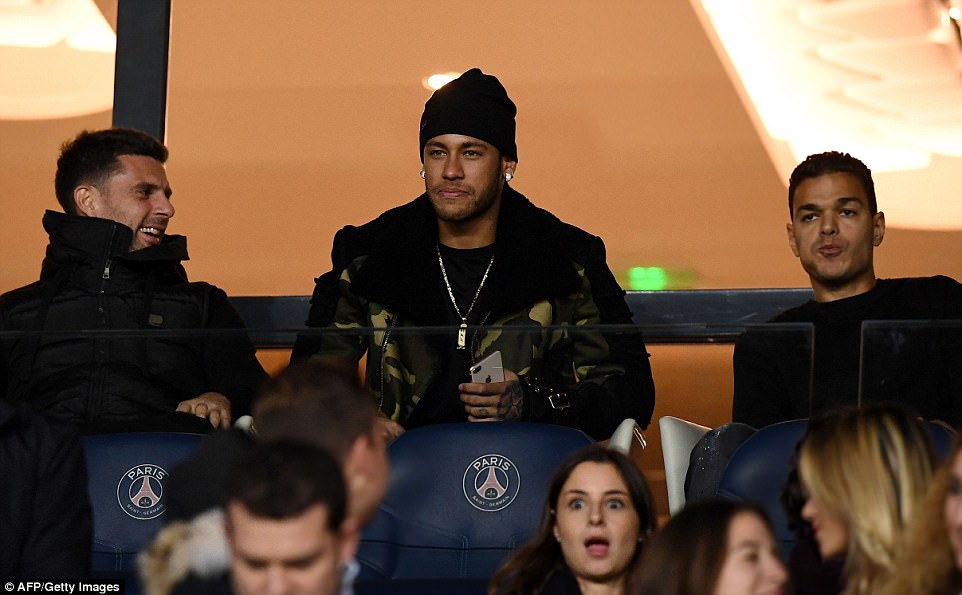 Rattled, Nice scrambled to compose themselves and begun setting about attempting to establish some foot hold in the tie.

Their defence was penetrated once again however on the half hour mark, Cavani and Di Maria linking up once more to double the lead.

The former Real Madrid man sent a lofted through-ball over the Nice back line, committing Dante into making an erroneous offside trap and send Cavani through on goal.

Bearing down on stand-in ‘keeper Benitez, Cavani tapped the ball around the advancing stopper and slotted home to give the league leaders a 2-0 cushion.

An ever presence in the final third, Cavani continued about his bustling performance by pitching in with defensive duties.

A clash with the notorious Mario Balotelli, brought upon by Cavani’s omnipresent work-rate, saw the two strikers square up in the centre of the Parc Des Princes before team-mates filtered in to diffuse the situation. 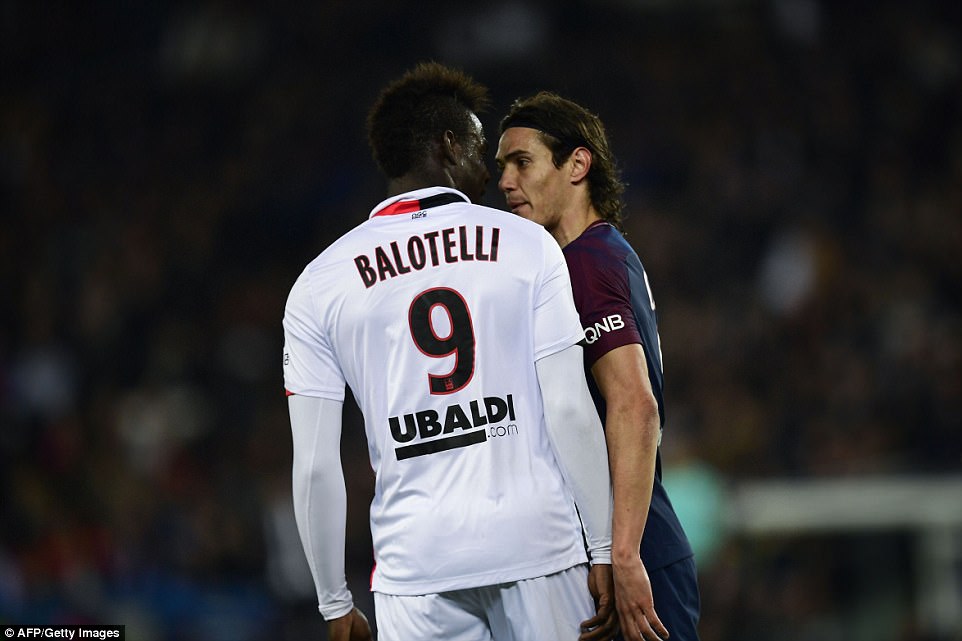 Involved in the thick of the action, Cavani squares up to former Liverpool and Manchester City man Mario Balotelli 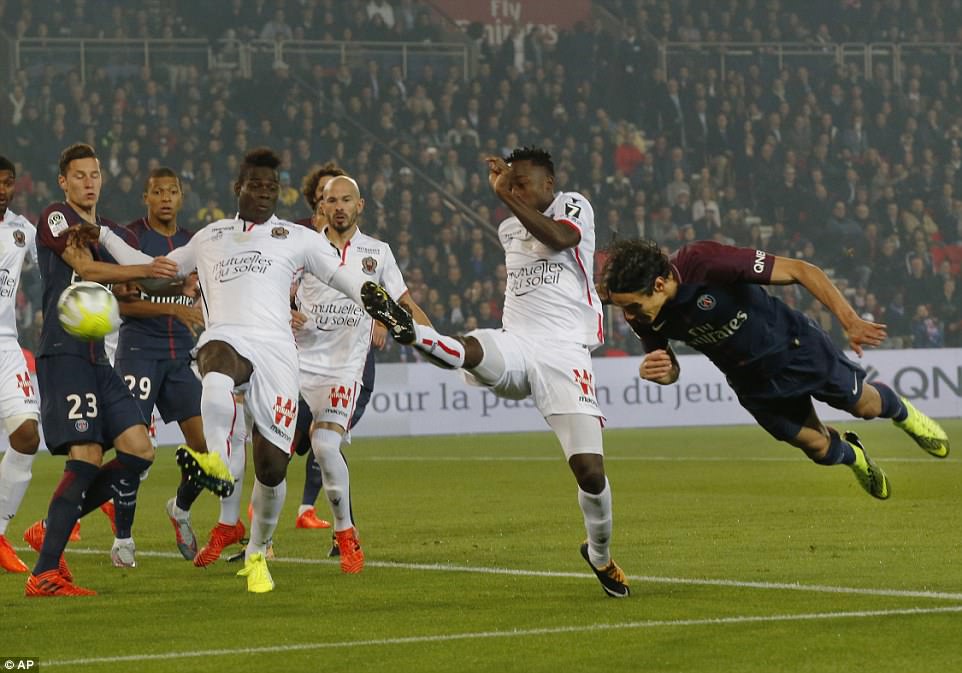 Earlier, Cavani peels off his marker and connects with a sublime diving header to put PSG ahead inside three minutes 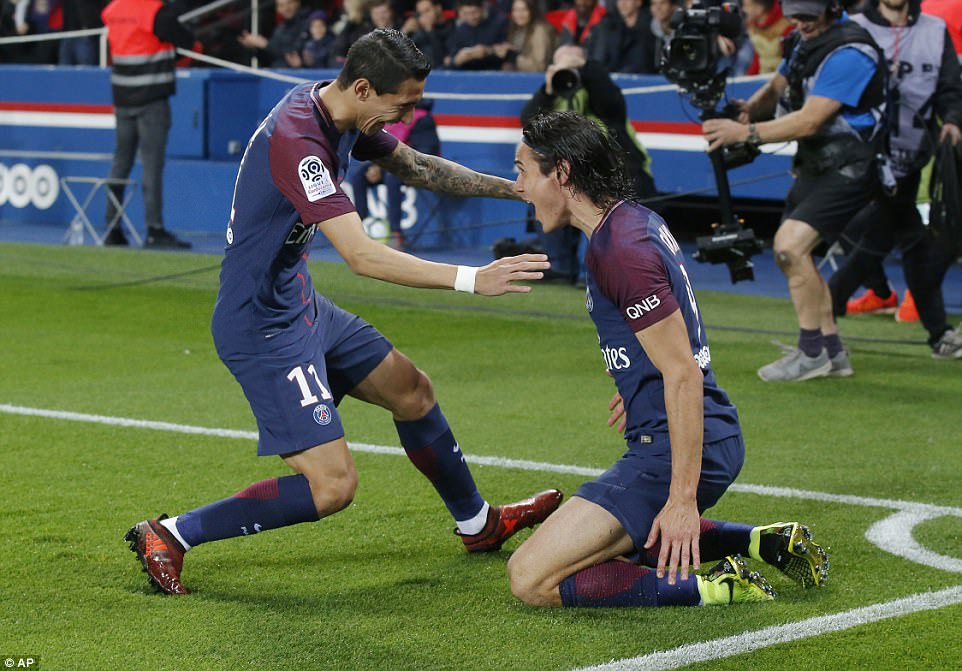 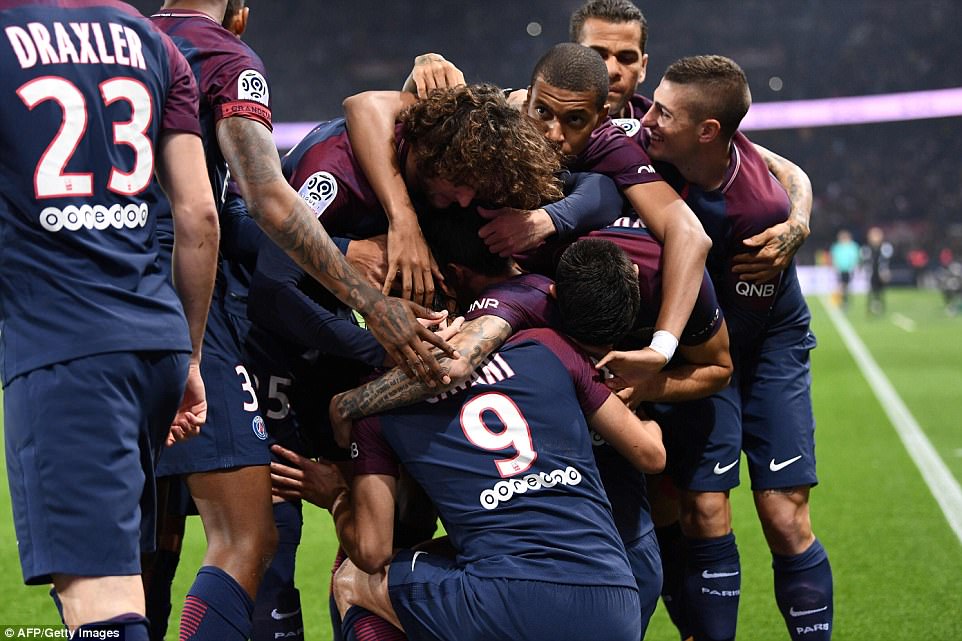 The second period saw PSG pick up where they left off, this time Cavani turning provider and heading the ball across the area for a combination of Di Maria and Dani Alves to poke home – the latter claiming the plaudits.

The Ligue 1 leaders showed just why they are the the team to beat this season, as they continued to set about dominated Nice all over the park.

Wonderkid Kylian Mbappe proved too much to handle for the struggling visitors, carving them open at will on several occasions, only for his end product to go lacking.

His replacement on the 70 minute mark for Javier Pastore was greeted with hearty reception by the home faithful, though the loudest cheer of the evening was yet to come.

With a brace under his belt and an assist for the third goal, Cavani departed the pitch in the latter stages with all four corners of the stadium on their feet.

Looking down from the stands a far from animated Neymar quietly acknowledged the superior performance put in by the Uruguayan, who now moves to within two goals of Monaco’s Falcao in the Ligue 1 goal scoring stakes.