By William Cole and Afp Reporter For Mail Online

Tucked away in a quiet, narrow street, the Beverley cinema held out for decades as Paris’s sole pornographic movie theatre, proudly yet discreetly offering non-stop showings of films.

But rising rents and changing social norms have finally caught up with the entertainment spot which shows films from the 1970s and 80s on a loop.

The adult cinema, on Rue de la ville Neuve, showed its last film reel on Saturday, and will now close for good.

Fans have just a few days left to pick up memorabilia from the movie house that is a symbol of a bygone Paris.

After the final screening last Saturday – the traditional ‘couples night’ – owner Maurice Laroche is remaining on site this week to sell films, posters, seats and whatever else is left.

‘Everything is for sale, except me,’ Mr Laroche told AFP on Monday as a handful of men pored over boxes of reels or struggled to make off with a huge speaker.

But women made up around a third of the curious who criss-crossed the theatre’s narrow brick-walled auditorium when the sale began Sunday.

Mr Laroche, who managed the Beverley since 1983 before buying it 10 years later, said that at 75 he was ready to retire to the ocean resort town of Royan in southwest France. 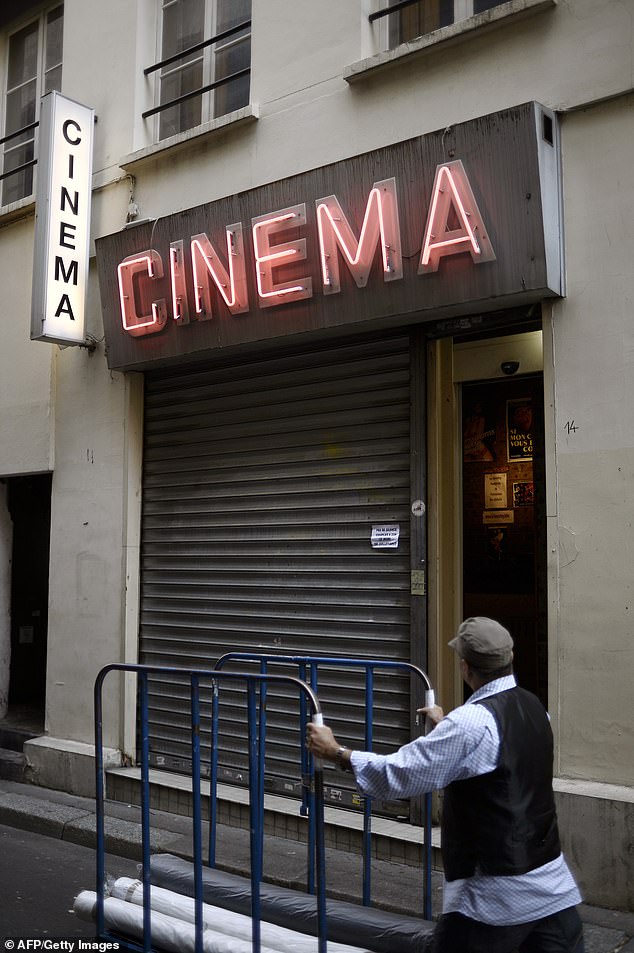 The Beverley’s entrance was on tucked-away sidestreet Rue de la ville Neuve, but welcomed 1,500 people through the door each week 20 years ago 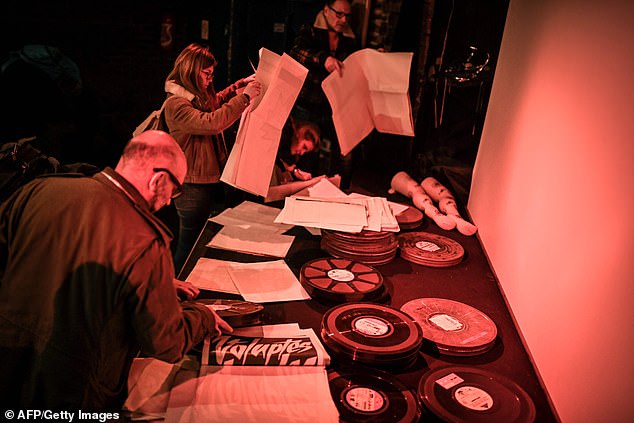 Fans and bargain hunters look through posters and film reels as owner Maurice Laroche announces that ‘everything is for sale, except for me’ 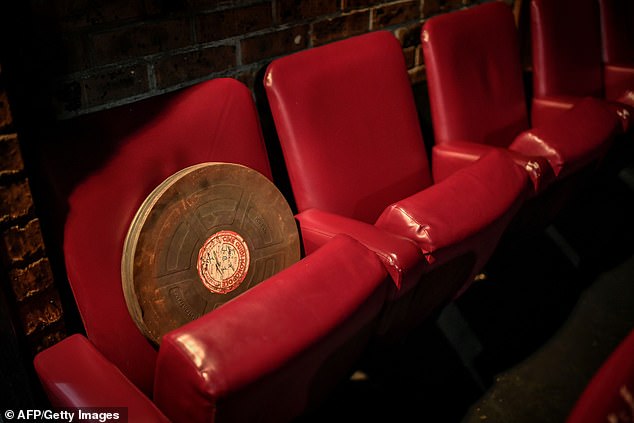 A reel of pornographic film sits in one of the theatre’s iconic red chairs, all of which are for sale in their current condition

His clients have become fewer as they’ve gotten older in recent years – most recently he had been selling less than 500 12-euro tickets a week, compared with 1,500 twenty years ago.

‘This was a place where you could be certain no minors would see pornography – nowadays they’re all watching on their phones,’ he said.

A property developer has bought the site, presumably with plans to install something more in line with the designer hotel and tapas bar up the street in a rapidly gentrifying corner of the capital. 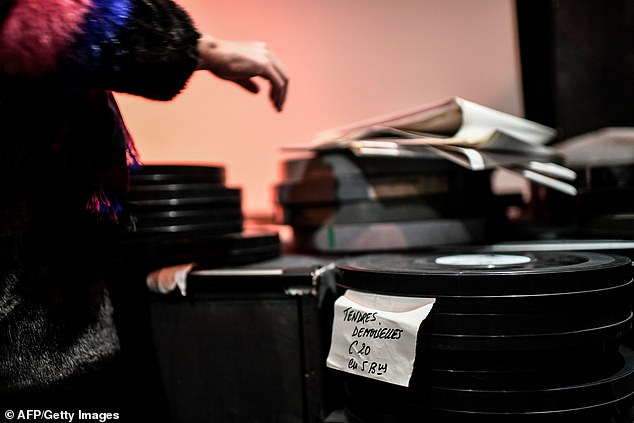 The theatre would play pornographic films from the 1970s and 80s on a loop throughout the days. Numbers of visitors had dwindled to 500 a week when the decision was made to close 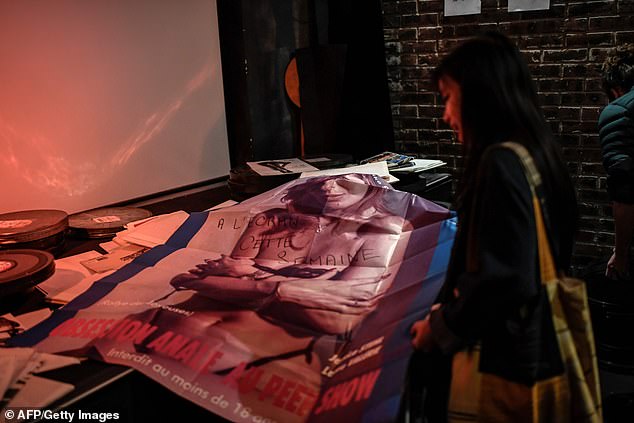 A woman examines a pornographic film poster, some of which are believed to be originals from the 1970 films shown at the movie house

According to France’s national cinema council only one X-rated cinema now remains in France, the Vox in Grenoble – though no one was answering the phone on Monday.

The council doesn’t appear to count the films shown at some of the seedier sex shops in Paris’s red light district at Pigalle, known for offering more than just a movie.

‘In its heyday, around 1975, there were over 900 cinemas specialising in pornography in France. Just six years later, there were only 90,’ French film journalist Jacques Zimmer told AFP.

Laroche said he would be taking his ‘head full of memories’ and two of the red vinyl seats to the balcony of his new apartment. 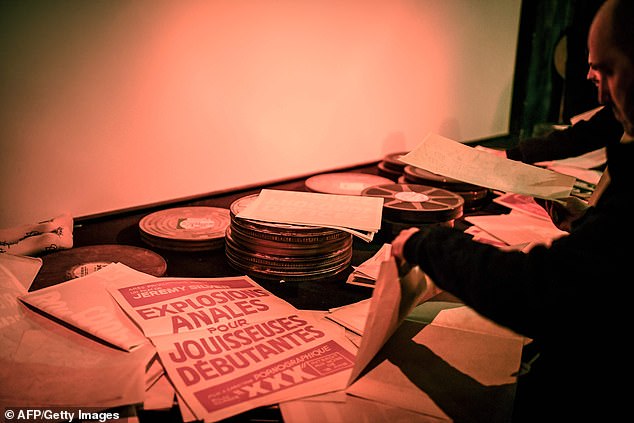 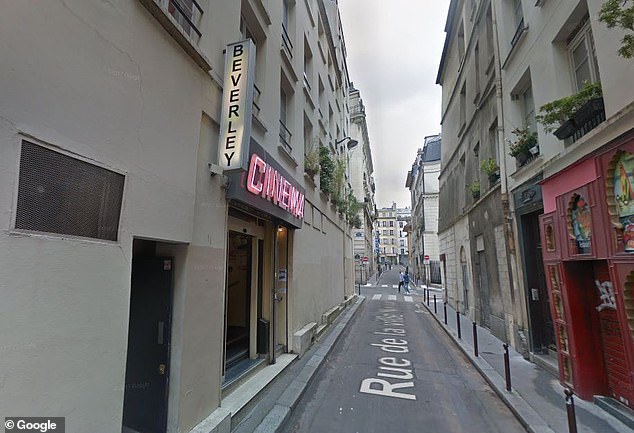