Paris’s most expensive apartment ever sells for £34million

The most expensive flat ever to be sold in Paris has been snapped up for £34m by a multi-millionaire industrialist leaving Britain because of Brexit.

It is a full seven million pounds more expensive than the previous record, and just one of numerous buildings in the French capital going to tycoons who want to get out of Britain.

The unidentified buyer ‘wanted to leave a United Kingdom plunged into uncertainty because of Brexit,’ according to a source familiar with the deal.

It has been shrouded in secrecy because of security concerns, but relates to the 16-room property covering more than 1000 square meters (3281feet) in the 7th arrondissement, close to the Eiffel Tower.

It is made up of the basement, a mature garden, and the ground and first floors of a modernised mansion that dates back to well before the French Revolution.

Originally features including fire places and cornicing are all in place, together with state-of-the-art conveniences, but neighbours are still upstairs.

This means it is technically a flat, according to agents Philippe Menager-Nicolas Hug, who dealt with the sale of the home, on the historic Rue des Saints-Peres. They refused to provide further details about the buyer.

Famous residents of the street, on Paris’s fabled Left Bank, have included the actor Jean-Paul Belmondo, star of the classic 1960 film Breathless (A bout de souffle)

‘It’s huge, but still just a city flat, so the price is absolutely breathtaking,’ said another source who lives nearby.

‘Very few people know who the industrialist is yet, but it’s well known that he is coming from London. Lots of people are right now.’ 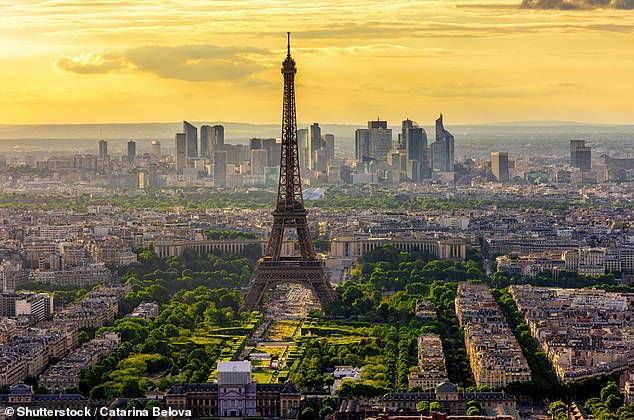 Britain is due to leave the European Union at the end of March, and France is actively encouraging businesses, financial institutions and high-worth individuals to move across the Channel.

President Emmanuel Macron – whose own official home, the Elysee Palace, is just across the Seine River from the Rue des Saint-Peres address – is a particularly fierce opponent of Brexit.

In 2007 a Paris penthouse flat was sold to a daughter of the late Uzbekistan leader Islam Karimov for the equivalent of £27m.

It was later seized by magistrates dealing with a money-laundering case, and was re-sold for half that price.

Property experts in Paris have confirmed that fears about Brexit have led to an explosion in the price of real estate in the city.

A complete house in the 7th arrondissement sold at auction for £42m late last year, and is also believed to have gone to multimillionaires leaving Britain.