While his schoolmates from Marjory Stoneman Douglas High School were leading the March for Our Lives and demanding stricter gun laws, Kyle Kashuv emerged as the voice of counter-demonstrators arguing for the Second Amendment.

Kashuv, a survivor of the February 14 massacre in Parkland, Florida, went on Fox News on Saturday and criticized the demonstrations as ‘anti-Republican.’

‘I saw this [march] as extremely anti-GOP,’ he told Fox News.

‘One of the biggest causes of this march is to be anti-Republican.’

Kashuv criticized fellow student David Hogg, one of the leading voices in the Never Again movement.

Kyle Kashuv (seen second from left with conservative activist Charlie Kirk arguing with demonstrators in Washington on Saturday), a survivor of the Parkland high school massacre last month, has emerged as a pro-gun voice opposed to his schoolmates’ movement 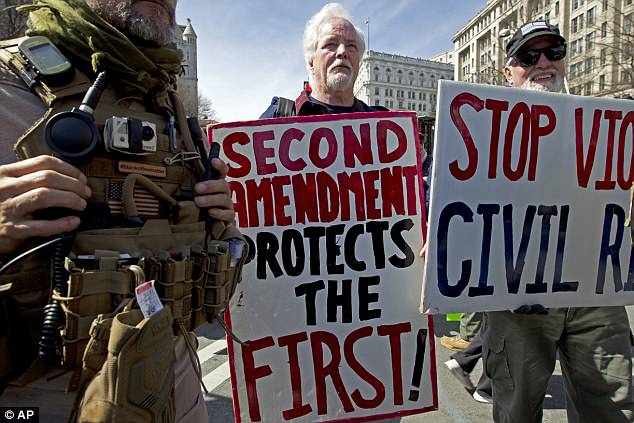 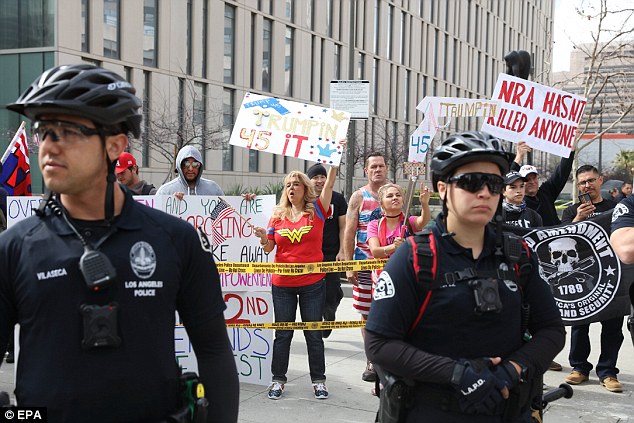 ‘You can hear the people in power shaking,’ Hogg said during the rally to loud applause.

‘We’re going to make sure the best people get in our elections to run not as politicians, but as Americans.

‘Because this – this – is not cutting it,’ he said, pointing at the white-domed Capitol.

‘We can and we will change the world!’

But Kashuv, a junior at Marjory Stoneman Douglas, said Hogg’s statements were ‘egregious and inflammatory.’

‘I talked to so many marchers and they don’t have a clear-cut solution. And it pains me not to see the government being held accountable for their failures. I don’t see anyone blaming Sheriff Scott Israel for failing to do what he was supposed to do.’

Kendall McKee, 11, is shown during a pro-gun march designed to advocate for fortified schools and more armed teachers Saturday in Salt Lake City

Kashuv said the protest organizers failed to criticize government failures leading up to the shooting.

‘I don’t see anyone looking at the FBI and saying, “How come two reports weren’t followed through?’ I don’t see anyone going, “78 reports to the Broward Sheriff’s office and nothing is done.”… How come we don’t hear speakers talking about this subject?’

Kashuv has become a hero among conservatives on Twitter. He posted a photo of himself alongside Charlie Kirk, a prominent right-wing activist, arguing with demonstrators in Washington, DC.

‘Smashing down hypocrisy with Charlie Kirk,’ read the caption of a tweet with a photo of the two debating a pro-gun control demonstrator.

Kashuv has even challenged his schoolmate, Hogg, to a debate.

The massive demonstrations from coast to coast demanding stricter gun laws were met in some places with small counter-protests from Second Amendment supporters.

Students and gun-control advocates in Montana and Wyoming joined protesters who rallied across the nation Saturday, galvanized by the students-turned-advocates who survived last month’s Florida school shooting. 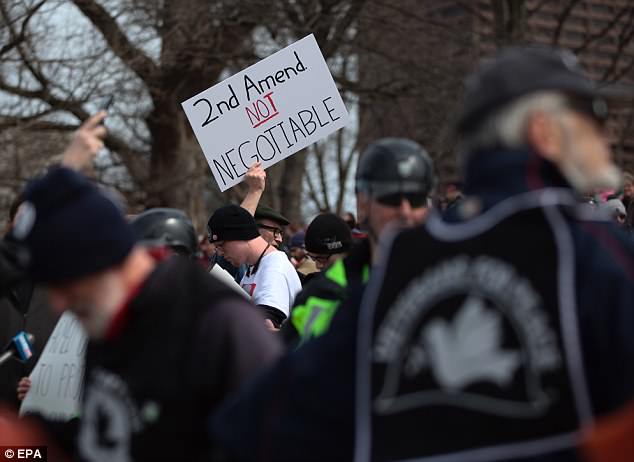 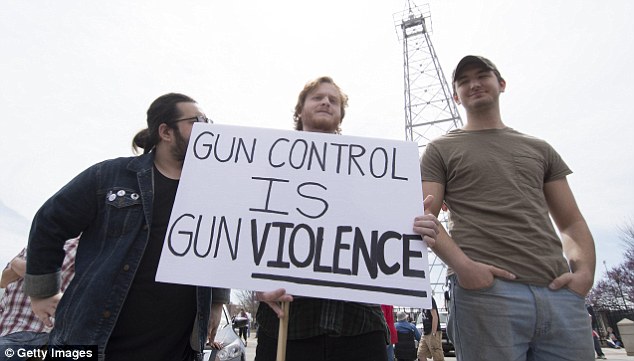 At least nine March for Our Lives rallies and marches were planned across the two states, most of them organized and led by high-school students after the Feb. 14 attack at Marjory Stoneman Douglas High School in Parkland left 17 people dead.

At the rally in Helena, Montana, two teen sisters who helped organize the protest said the Parkland shooting survivors gave them hope for the first time after watching and experiencing years of gun violence in schools.

Outside the Montana Capitol building, a counter-protest was held by a smaller number of gun-rights advocates who swore that no outsiders would dictate gun control or infringe on their freedom.

‘Today is about showing this country who Montana is, what we represent,’ said organizer Brent Webber.

‘We will be heard and you will not be forgotten.’

One high schooler in attendance at the pro-gun rally, Braxton Shewalter of Columbia Falls, said he held a pro-gun rally at his school during the nationwide student walk-outs earlier this month. 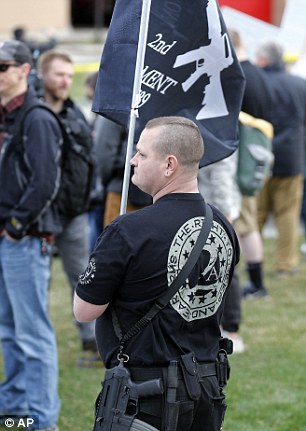 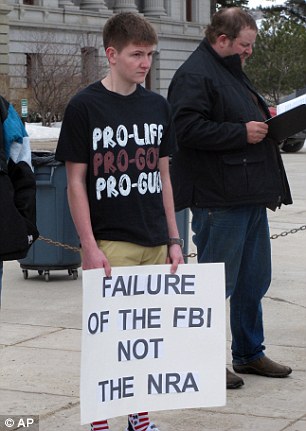 He said he believes the voices of responsible gun owners have been drowned out since the Florida shooting.

‘All we believe is that our voices deserve to be heard, too,’ Shewalter said.

In Washington, DC, a small number of counter-protesters stood outside of the Trump International Hotel advocating for the Second Amendment.

Approximately 10 people came to the hotel after messages on the National Rifle Association’s Facebook page, according to The Washington Post.

The counter-demonstrators held signs which read ‘keep your hands off my guns’ and ‘If the Govt can have tanks, I can have my AR-15.’

The AR-15 – or variants of it – is the semi-automatic rifle that was used in the recent shootings in Parkland, Las Vegas, Sutherland Springs, and Newtown.

‘The government didn’t give me these rights. These are the rights granted to us by our creator,’ Brandon Howard, a US Army veteran who was at the Trump International Hotel, told HuffPost.

Howard thinks that the best way to prevent future school shootings is to arm teachers.

‘They need teachers, who on a voluntary basis, have been trained in the use of a firearm, that they do so choose, carry it concealed in the classroom every day.’

‘You can go die for your country but [you] can’t buy a gun?’

In Boston, a group of about 100 counter-protesters gathered on the steps of the State House and then marched to Boston Commons.

Police on bicycles separated the counter-demonstrators from the March for Our Lives protesters, according to CBS Boston.