A student who co-founded the March For Our Lives movement has revealed he has left the group and says he regrets confronting Florida Senator Marco Rubio on live television after the deadly Parkland high school shooting.

Cameron Kasky, a Marjory Stoneman Douglas High School senior, became one of the most prominent faces in gun control advocacy after surviving the February mass shooting.

The 17-year-old helped raise millions of dollars with his fellow students for a gun-control rally and organized the March For Our Lives event in Washington.

But Kasky revealed on Wednesday that he has left the group and plans to change his approach in advocating for gun control.

Cameron Kasky, a Marjory Stoneman Douglas High School senior, became one of the most prominent faces in gun control advocacy after surviving the February mass shooting

‘I left the organization and if I thought that my friends and the people I worked with couldn’t do it without me, I would not have done that,’ Kasky told Fox News Radio.

‘All of our efforts looking forward looked like they didn’t really need my involvement and, while I could have helped, it wasn’t crucial.’

He said his decision to leave March For Our Live was not because he had changed his political views, but because he wanted to change the way he approaches political disagreements.

In the days after the Parkland massacre, Kasky confronted Senator Rubio at a town hall event broadcast on live television.

‘Senator Rubio, it’s hard to look at you and not look down a barrel of an AR-15 and not look at Nikolas Cruz, but the point is you’re here and there are some people who are not,’ he told the senator at the time.

Kasky then questioned Rubio about accepting donations from the NRA. 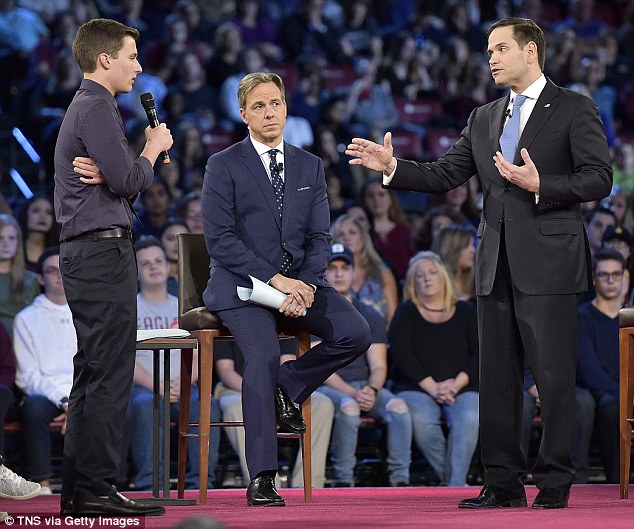 In the days after the Parkland massacre, Kasky confronted Senator Rubio at a town hall event broadcast on live TV (above). He said he now regrets his approach in trying to embarrass Rubio

Looking back on that moment, Kasky said he now regrets trying to ’embarrass’ Rubio.

‘I look back on that and I say, you know what, there were people who had just been buried and when you’re looking at somebody that you find might in some way have been complicit in this murderer obtaining the weapon it’s hard not to say something like that,’ Kasky said.

‘But, I went into that wanting less conversation and more to embarrass Rubio and that was my biggest flaw. I was going into jab at something when I could have gone in and said ‘what can we do here’.’

Kasky also said he regretted using the name of the gunman, Nikolas Cruz, in his conversation with Rubio.

‘Looking back it ticks me off so much when people do that because then you’re getting that person’s name out there and making them a celebrity,’ he said.

‘These people are very often crying out for some sort of attention and power and entitlement and then you’re making them a household name. I feel in some ways responsible for that.’ 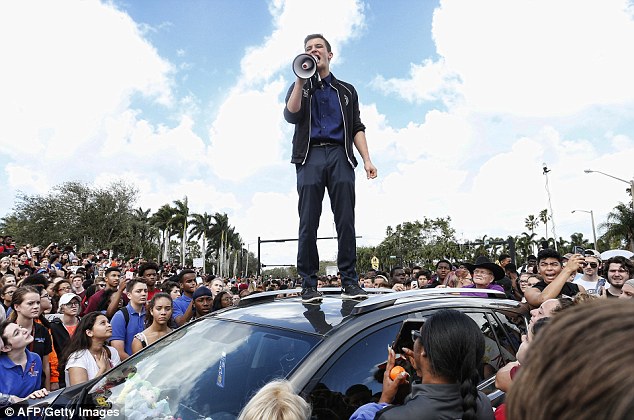 Kasky said his decision to leave was not because he had changed his political views, but because he wanted to change his approach in advocating for gun control. He is pictured above at a rally at Marjory Stoneman Douglas High School after the shooting

Kasky said spending his summer touring with March For Our Lives across the country advocating for gun control made him appreciate views that are different than his own.

‘I met that person in Texas whose got that semi-automatic weapon because that’s how they like to protect their family. I met the 50 some odd percent of woman who are pro-life, even though I thought it was preposterous that a woman could be pro-life and not pro-choice at the time,’ he said.

‘I learned that a lot of our issues politically come from a lack of understanding of other perspectives and also the fact that so often young conservatives and young liberals will go into debate… trying to beat the other one as oppose to come to an agreement.

‘I’m working on some efforts to encourage bipartisanship or at least discussion that is productive and help a lot of people avoid the mistakes that I made.’