Thousands have gathered for an emotional interfaith vigil at the National Cathedral ahead of Saturday’s ‘March For Our Lives’ in Washington DC and in other cities.

Area residents joined together with students and families affected by the Valentine’s Day shooting at Marjory Stoneman Douglas High School in Parland, Florida, where 17 died.

Volunteers handed out more than 2,000 candles on the cathedral steps as the attendees entered.

‘We come with sadness, as we grieve so much loss of life, so much senseless death, so much needless suffering,’ Rev. Randy Hollerith, dean of the Cathedral, told the crowd, WTOP reported.

Volunteers handed out more than 2,000 candles on the steps of the National Cathedral as the attendees entered on Friday 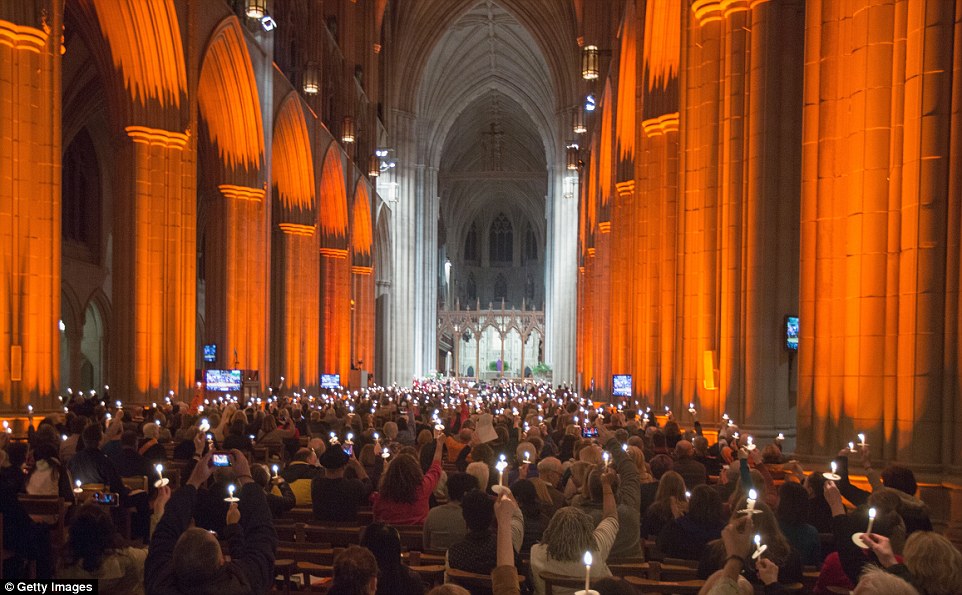 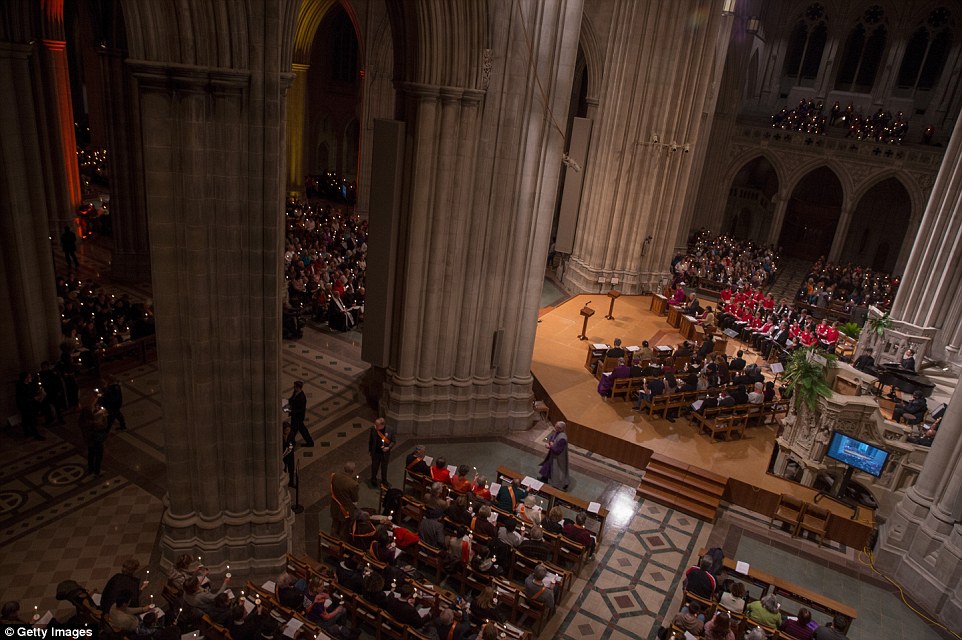 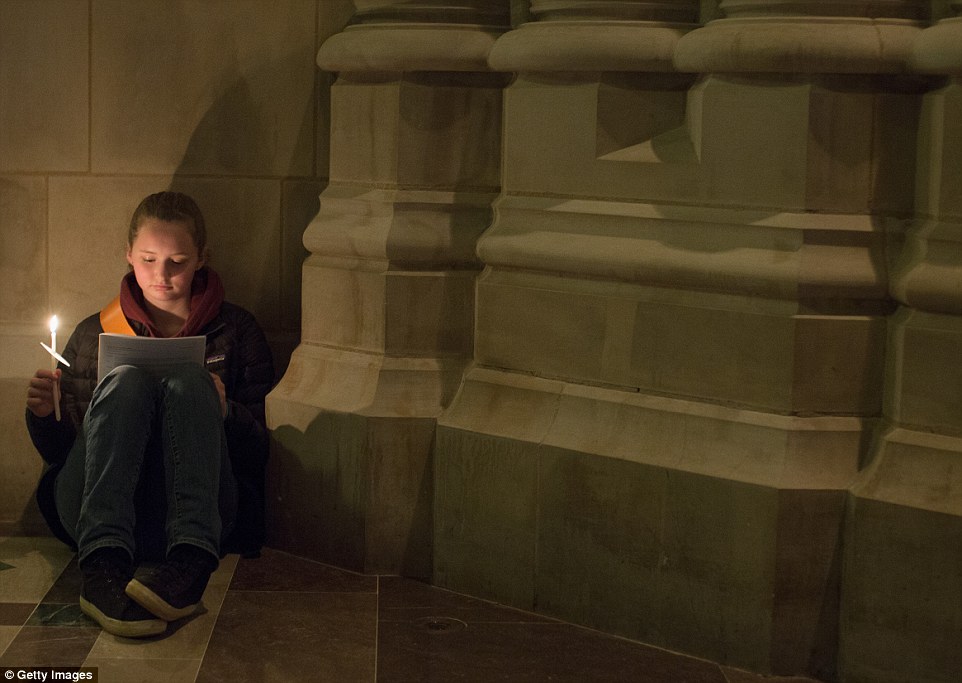 Mia Sande, 13 of Reston, Virgina takes part in a candle light vigil at the Washington National Cathedral on Friday

Kathleen Wind, of Reston, Virginia, said that felt she needed to join the many others who had traveled to DC for the event.

‘This is just an extremely important placed to be tonight, to pray and be with all of these students that are coming into town,’ Wind said.

‘She was going to change the world,’ Schentrup said, as he remembered his daughter.

A slate of religious leaders from multiple faiths and denominations also addressed the crowd.

‘God is about to make a new covenant, with a new generation, who understands what it means to have the law written on your hearts, instead of wrapped up in a distorted understanding of a Second Amendment,’ said Reverend Canon Mark Sims, an Episcopal minister at the Schentrup family church in Florida, according to Mother Jones.

‘Students, this nation’s adults, we have failed you,’ said Rabbi Jonah Dov Pesner of the Religious Action Center of Reform Judaism.

It came on the eve of a massive rally in support of gun control in Washington, with sister marches planned at cities around the country. Phillip and April Schentrup, parents of 16-year-old Carmen Schentrup who died in the recent shooting in Parkland, speak at the Washington National Cathedral for a interfaith prayer vigil 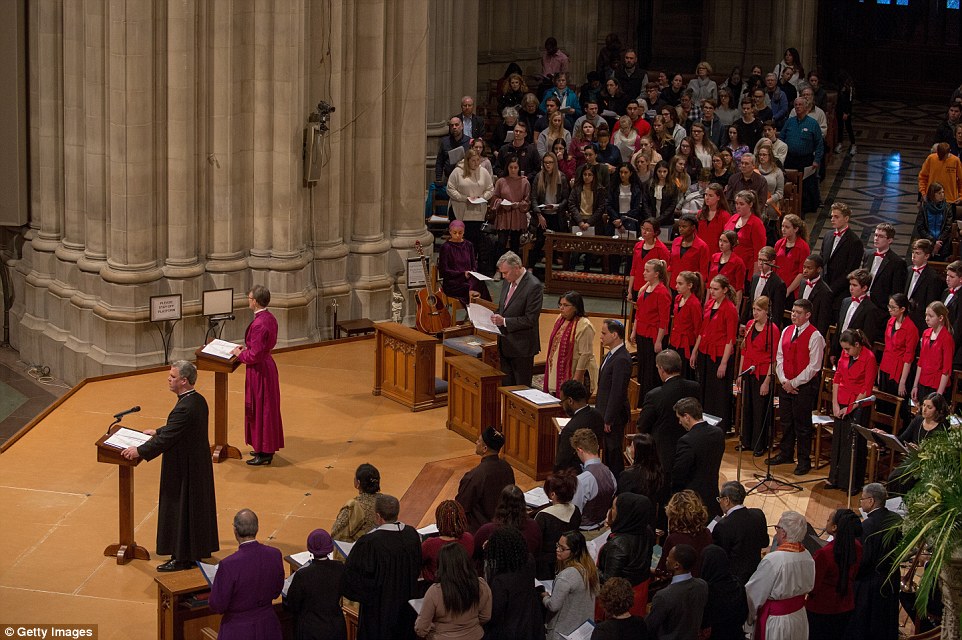 Pastors speak at the Washington National Cathedral for a interfaith prayer vigil with activists, students, and pilgrims 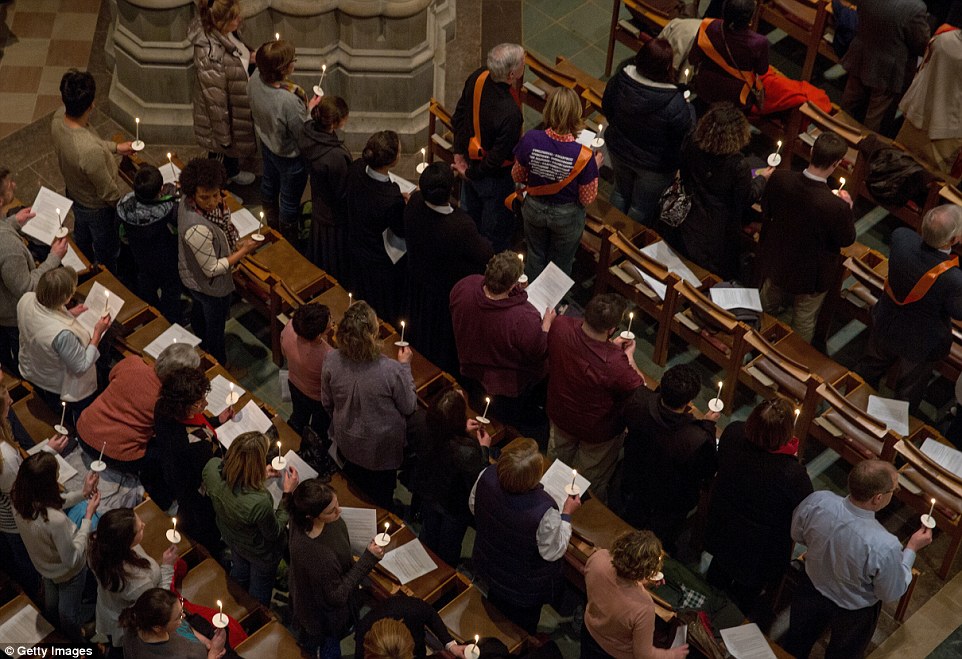 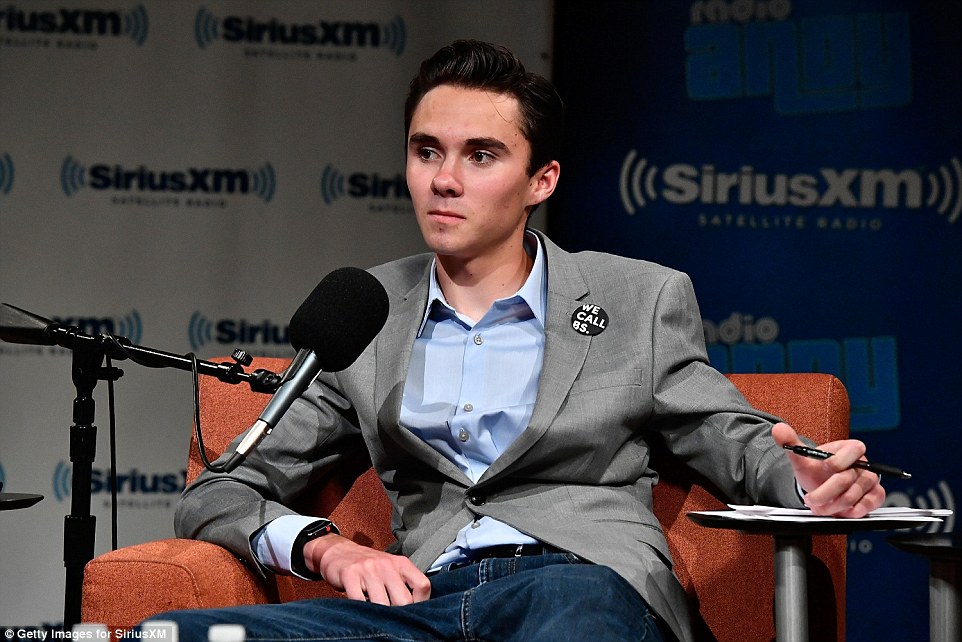 Organizers hope the event will prove that the country has reached an emotional tipping point on gun violence, with teenagers seizing the initiative and leading the demand for change.

The nation’s capital is generally nonchalant about protests, but Saturday’s gathering has prompted more attention and speculation than usual.

Estimates on crowd size are notoriously unreliable but organizers are hoping to draw 500,000 protesters; that would match last year’s women’s march and make this one of the largest Washington protests since the Vietnam era.

It would also bolster claims that the nation is ready to enact sweeping changes to its gun control laws. More than 800 other concurrent marches are planned in cities across America and dozens of locations overseas.

Joseph Kushner, the brother to President Donald Trump’s advisor and son-in-law Jared Kushner, also posted on Instagram that he would be attending a march.

‘I look at the younger kids and the future generations and I never want them to go through what we went through or see what we saw,’ said 15-year old Kayla Renert, a student at Stoneman Douglas High School, on Friday morning.

Renert, who sheltered in a classroom during the attack and had a friend wounded in the leg, was on a bus bringing her to Washington from the airport after flying up from Florida.

She pointed out that the Parkland shooting wasn’t even the most recent school shooting in the United States. One student was wounded and another later died from her wounds after being shot Tuesday in southern Maryland. The 17-year old gunman was also killed by an armed school resource officer.

‘We keep saying, ‘Oh this is going to be the last time.’ But there’s already been another time,’ Renert said. Students are seen during a March 14 walkout in this file photo. Organizer hope half a million will rally in DC on Saturday Joseph Kushner, the brother to Trump’s advisor and son-in-law Jared Kushner, posted on Instagram that he will march

Many of the protesters spoke pointedly about how their parents and others of their generation had failed to bring about the changes they are demanding. They present the youth-led nature of the current movement as proof that they will succeed where their predecessors had failed.

‘I’m here because previous generations couldn’t do what we’re doing right now,’ said Charlie Shebes, 16, another student from the high school, on a flight from Ft. Lauderdale. ‘I want to see safer schools. I want to see changes in gun laws.’

The students have tapped into a powerful current of pro-gun control sentiment that has been building for years. They have also partnered with well-funded liberal groups such as Everytown for Gun Safety, the gun control advocacy group founded by former New York mayor and billionaire Michael Bloomberg.

Polls indicate that public opinion nationwide may indeed be shifting on an issue that has simmered for generations, and through dozens of mass shootings. A new poll conducted by The Associated Press-NORC Center for Public Affairs Research, found that 69 percent of Americans think gun laws in the United States should be tightened. That’s up from 61 percent who said the same in October of 2016 and 55 percent when the AP first asked the question in October of 2013. Overall, 90 percent of Democrats, 50 percent of Republicans and 54 percent of gun owners now favor stricter gun control laws. 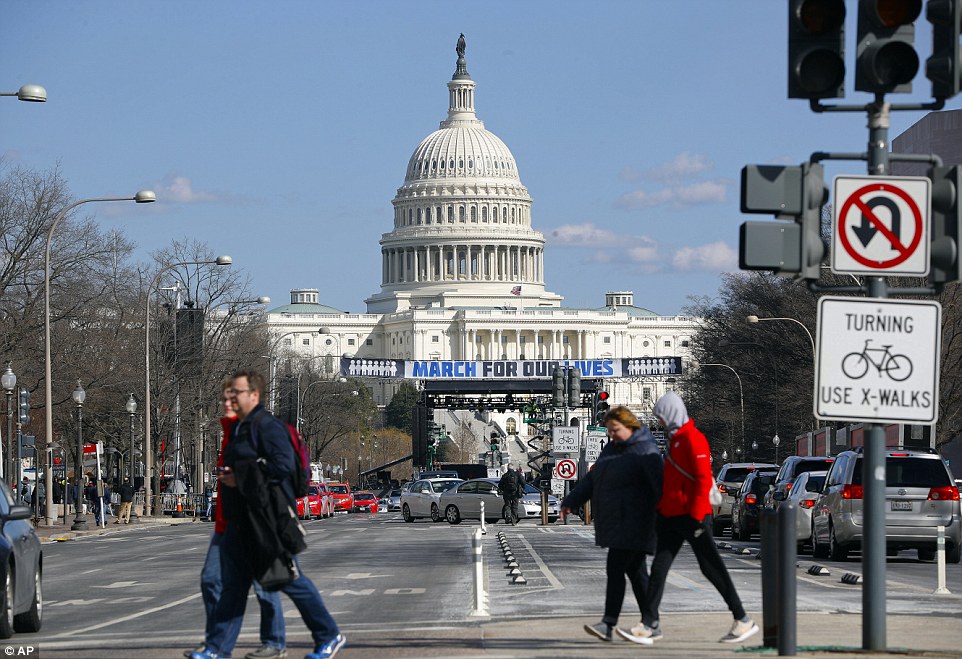 ‘To me, it feels like this is THE moment when it’s all going to change,’ said Anne Tumlinson, who will be hosting about a half dozen high school demonstrators from Jacksonville in her Washington home. A grassroots campaign among Washington residents resulted in more than 1,500 Washingtonians offering their homes to underage out-of-town demonstrators.

But even with claims of historic social momentum on the issue of gun control, the AP poll also found that nearly half of Americans do not expect elected officials to take action. One of the questions facing march organizers and participants will be how to translate this one-day event, regardless of turnout, into meaningful legislative change.

One way is by channeling the current energy into mid-term congressional elections this fall. Students in Florida have focused on youth voter registration and there will be a registration booth at the Saturday rally.

‘We’re pushing the message of now is the time for action but also November is going to be the time for action. It’s the time to make our voice heard when we’re voting,’ said Alex Wind, a 17-year-old student from MSD. ‘We are the age of people that don’t vote normally. We’re going to change that.’