The Houses of Parliament has escalated its war on mice amid claims the ‘infestation’ is getting worse despite a £111,000-a-year pest control bill.

An internal report obtained by MailOnline using Freedom of Information rules reveals the authorities are taking ‘additional steps’ after a rash of sightings of rodents on the estate.

MPs, peers and staff complain that mice are regularly seen in canteens, and even run across desks. The problem has been fueled by a huge programme of building and restoration work.

Glue boards – which mice get stuck to – have now been installed in the historic chambers, and thousands of ‘bait stations’ have been upgraded. Officials also say they are consulting a ‘world-leading expert’ in pest control.

But there is still no sign that the authorities are ready to bow to calls for cats to be brought in.

New figures published by Parliament show that £111,498 was spent on controls last year – down slightly on the previous year. But the problem appears to have escalated again since then

According to the paper, politicians have demanded the authorities look again at how to deal with the pest problem on the estate.

Senior officials blamed the ‘proximity of the Houses of Parliament to the River Thames, as well as to Westminster Tube Station’ for making the buildings ‘particularly vulnerable to pests, especially to mice’.

‘In recent times, this vulnerability has been exacerbated by the amount of building work taking place on the Estate,’ the briefing added.

The paper highlighted the huge efforts already in place to combat the scourge.

New figures published by Parliament show that £111,498 was spent on controls last year.

Another £2,419 went on consultancy, and £16,753 on flying a hawk to ward off pigeons and other birds who can damage delicate stonework.

However, the number of mouse sightings makes clear the issue has become significantly worse since then.

There were 119 reports in April and May, compared to 49 in the equivalent period last year.

The briefing paper, delivered to the House of Lords Services Committee in June, said: ‘Parliament retains a dedicated pest control technician to monitor pest invasion and take any necessary measures.

‘All key areas in the Palace are “baited”, meaning they contain traps to isolate any pests, including the Chamber and kitchen areas.

‘Mice and rat bait boxes, of which there are over 2,000 on the Estate, are checked every 21 days.

‘Additionally, every 6 months, a world-leading pest control consultant conducts a detailed audit of all pest traps and advises on how control could be improved. 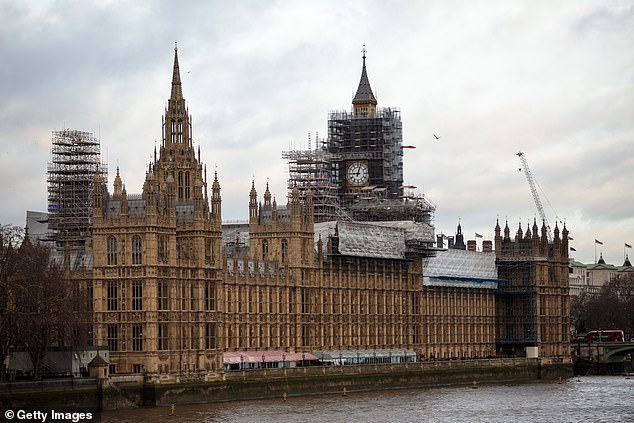 MPs, peers and staff complain that mice are regularly seen in canteens, and even run across desks. The problem has been fueled by a huge programme of building and restoration work at Parliament (pictured)

The officials say ‘additional steps’ are now being taken to crack down on pests.

They include installing ‘glue boards’ in the historic chambers, which are considered particularly ‘vulnerable’ to mice.

‘Permanent re-fixing of bait stations for all affected areas commenced on Monday 29th April, followed by the glue-boarding of any vulnerable areas including in all food preparation and services areas, the Chamber, the Prince’s Chamber, the Family Room and rooms across all floors on the West Front.’

However, the parliamentary authorities insist that the only animals allowed on the estate are guide dogs.

They have warned that cats could be poorly cared for or present a health and hygiene hazard if they are brought to Westminster.

In a rare piece of good news, the report reveals Parliament is making some progress tackling moths.

‘A new formulation of insecticide has recently been introduced which incorporates an Insect Growth Regulator; this prevents the eggs and larvae from developing properly,’ the briefing said.

‘A test area was chosen for a three month trial, which has proven successful with the area completely clear of infestation. The new formulation will now be extended to all infested areas.’