Yvette Cooper warned Parliament would take control of Brexit if Theresa May fails to lead the country out of the ‘worst kind of chaos and brinkmanship’ today.

In a furious blast at the PM, Ms Cooper accused Mrs May of having ‘truly run down’ the clock.

She said the PM had hoped to unite Parliament around a fudge that saved hard questions about the final state of Brexit for later – but had failed.

The senior Labour MP told Mrs May the looming catastrophe in tomorrow’s re-run vote on the deal was the moment to ‘pivot’ to a new strategy.

Mrs May faces a second humiliation at the hands of MPs tomorrow as eight weeks of frantic diplomacy to renegotiate the Irish border backstop have come to nothing.

In a speech at the Centre for European Reform (CER) today Ms Cooper said ‘nothing has changed’ since the PM’s historic 230-vote loss on January 15.

She said: ‘What has the Prime Minister been doing for 8 weeks? Even if by magic, the Attorney General comes up with something to add at the last minute we will have barely hours to consider it before we are supposed to vote.

‘This is the worst kind of chaos and brinkmanship.’

The MP added: ‘We have no idea what kind of Brexit we are going to get. In just over two weeks’ time.

‘How can anyone plan?’

Ms Cooper said the stakes are ‘far too high’ to rely on the hope Mrs May has a ‘cunning plan’ to escape the Brexit maze.

She said MPs knew time was ‘running out’ and would no longer ‘stand back and wait’. 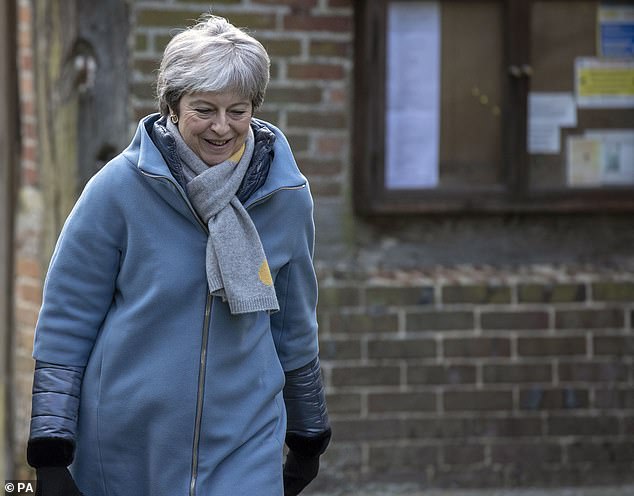 In a furious blast at the PM, Ms Cooper accused Mrs May (pictured yesterday in Maidenhead) of having ‘truly run down’ the clock

She said: ‘Theresa May needs to accept that her approach isn’t working whether her deal gets through or not this week.

‘As Prime Minister, she needs to show some leadership and reset the debate. This is the point to pivot not to dig in.

‘There are practical steps the Prime Minister can take now. Not easy ones but sensible ones, step by step, to build more consensus around a way through.

‘If she won’t find a way forward, then Parliament has a responsibility to do so instead.’

Ms Cooper said a simple delay to Brexit with no plan in place would prove nothing – insisting even if the deal does pass the political declaration on the future partnership meant ‘following the Conservative Party on a journey into the unknown’.

She said: ‘The risk is that the Prime Minister just does more of the same, running round the same circles on the backstop, and running down the new clock.’

Ms Cooper said MPs should hold ‘indicative votes’ to find out what sort of final settlement the Commons would agree.

And she said that would likely need ‘public consent’ via either a general election or a referendum.

Ms Cooper said: ‘The challenge is to find a way to build consent and legitimacy not to just create more anger and division.

‘So that confirmation process is best resolved once we have a clearer view what Brexit looks like.’