Parliament’s fig trees could face the chop after £10,000 bill

Parliament’s fig trees could face the chop after the authorities had to pay £10,000 to stop them falling over.

The exotic trees – ficus benjamina – line the grand atrium of the glass-roofed Portcullis House, the new extension the Parliament.

They were imported form Florida in 2001 and provide MPs and their staff with a scenic canopy above the cafe.

But they cost around £20,000 a year to maintain – and the parliamentary authorities had to cough up an extra £9,875, excluding VAT.

John O’Connell, chief executive of the Taxpayers’ Alliance, attacked the authorities for spending the cash on the trees at a time when many public sector services are feeling the squeeze.

He told The Times, ‘There is clearly some dead wood in parliament’s spending priorities.

‘Politicians should spend more money on necessities instead of internal decor.’

The Commons authorities said that it had ordered a review – raising the prospect that the trees could be axed.

A spokesman said: ‘The trees in Portcullis House contribute to the building’s environmental and acoustic performance.

‘We are currently reviewing a number of options to minimise costs, as last year additional expenditure was required to stabilise the trees to prevent them from uprooting and becoming unsafe.’

The parliamentary authorities attracted a storm of criticism when it emerged that they had spent £400,000 over around a decade on the trees.

But architects have said the trees, surrounded by water features, are essential to provide shading to prevent the coffee bars and courtyard restaurants from becoming too hot on sunny days. 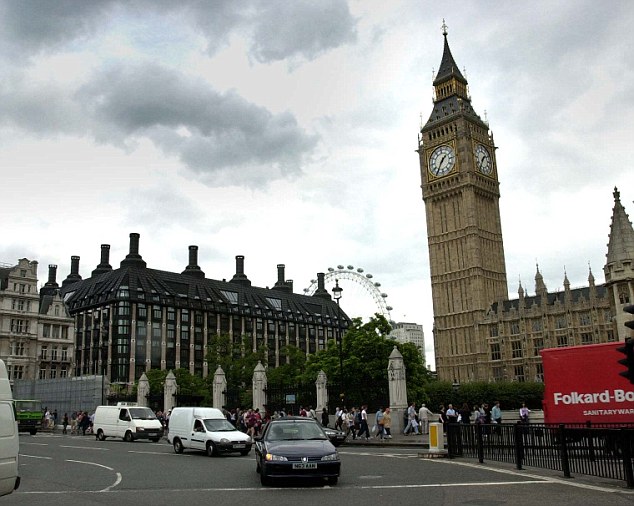 The Commons said that it had ordered a review – raising the prospect that the trees could be axed (pictured, Parliament)