By Kathryn Knight For Weekend Magazine

For a man who’s made his name writing twisty crime thrillers, Ian Rankin’s admission is startling. ‘At a murder mystery dinner I’m hopeless,’ he confides. ‘I’ve never even won a game of Cluedo.’

Goodness knows how he’d get on then if he was actually taking part in Murder Island, a new six-part series that’s part game show and part murder mystery, in which members of the public join forces with retired detectives to solve a fictional crime. Luckily, Ian was tasked instead with creating the plot and characters for what, in essence, is Cluedo for TV.

Viewers who tune in to the first episode of Murder Island, filmed on Gigha in the Hebrides, will see a woman running along and flagging down a car before calling emergency services to say she’s found a body. 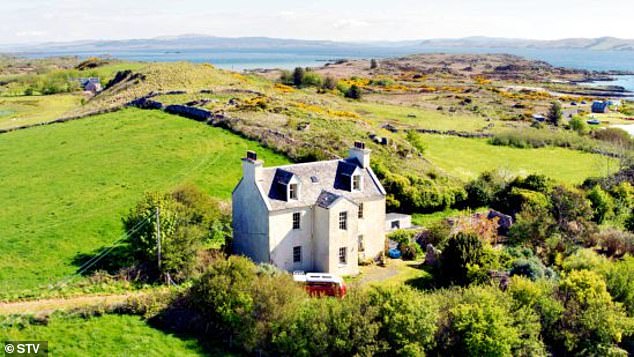 Ian Rankin, who is best known for writing twisty crime thrillers has created the characters and plot for new series Murder Island. Pictured: The house where the murder was committed

The action then jumps to a forensic team examining the scene, at which point several self-professed armchair detective duos – supervised by real retired senior investigating officers – scrutinise crime photos, gather evidence and quiz witnesses with the aim of identifying a suspect and making a watertight case that would be strong enough to reach court.

The civilian ‘detectives’ have real pathologists, forensic scientists and psychologists at their disposal as they compete to see who can spot the killer first. A £50,000 reward is at stake for the winners, while the poorest-performing duos are periodically culled.

It was a challenge for Ian, who’s best known for his hit Inspector Rebus novels about the saturnine Edinburgh CID detective, played on TV by Ken Stott.

‘When I write a novel I’m in control, but this was very different; once the script had gone to the island, the actors were at the mercy of the contestants,’ he says.

‘But I thought if I create compelling characters and the nuts and bolts of the plot, I’ve done my job; the actors and producers have to do the rest.’ 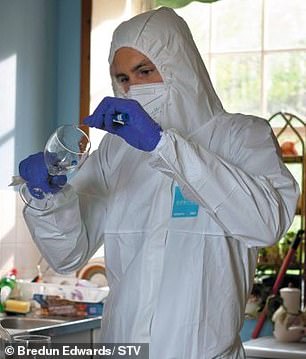 Ian who won’t be writing future series due to his writing commitments, said he would like to see another author take it on. Pictured: A forensic scientist at work

We learn early on that the victim is called Charly Hendricks and she had returned to the island of her birth (Gigha is turned into the fictional island of Hirsa).

She and the rest of the cast are seen in flashback and in ‘real time’ as they’re quizzed by our sleuths.

‘The contestants can ask them anything, and the actors have to be nimble enough at improvisation to answer convincingly,’ says Ian.

He professes a fondness for the armchair sleuths (teams include married couples and friends) who like to think their enthusiasm for crime drama has given them the skills they need. ‘Early on they’re a bit smug,’ he says.

‘Then they stumble into the crime scene and start getting it wrong – there are two big pieces of evidence they miss. It’s a very steep learning curve, and that’s part of the fun for the audience at home who probably all think of themselves as fantastic armchair detectives too.’

He believes this series could be the first of many, but alas, with another Rebus novel to deliver, Ian won’t be writing any more. ‘But I’d like to see another author take it on,’ he says.

For now though, it’s up to the viewer to work out the killer – or killers – in this first series. ‘I like to think there’ll be plenty of water-cooler moments,’ he says. ‘And I hope people have lots of fun trying to work it out.’