The partial shut down of the government may shake up the U.S. economy.

America’s economic expansion may see a decline as a result of the risks posed by the government shut down that started Saturday morning.

Experts say that if the Congress doesn’t pass a funding bill soon, the stock market will continue to fall, Trump’s administration will implode with chaos, and interest rates may hike, and a trade war could erupt with China.

According to Gregory Daco, the chief U.S. economist at Oxford Economics, the U.S. economy will remain strong but the government should be wary of the falling stock market.

The government shut down may threaten the U.S. economy, could lead to a recession and embittered relations with China as politicians scramble to pass a spending bill

‘What really matters is how people perceive these headwinds – and right now markets and investors perceive them as leading us into a recessionary environment,’ Daco said.

The stock market was rattled on Thursday by President Donald Trump’s threat to shut down the government unless his border wall is funded and federal agencies were closed on Friday at midnight.

As tensions with the incoming Democratic House majority have reached a fever pitch, Trump warned Friday that he foresees a ‘very long’ shutdown.

Experts say that Trump’s administration will only become more dysfunctional as the shutdown stretches on.

The White House already appears to be a revolving door of officials, as Defense Secretary James Mattis notably resigned earlier this week in protest of Trump’s decision to pull American troops from Syria.

How markets respond to the shut down could lead to a recession or growth.

The shutdown is unlikely to hurt economic growth very much, even if it last awhile, because 75 percent of the government is still being funded.

Each week of the shutdown would shave a relative minuscule $1.2 billion off the nation’s gross domestic product, according to S&P Global Ratings estimates.

As Trump struggles to cooperate with Democrats, the federal support through deficit spending will likely wane this year, according to Lewis Alexander, U.S. chief economist at Nomura.

As a result of declining deficit spending, the economy is widely expected to weaken from its roughly three percent growth this year, which would be the strongest performance since 2005.

Stocks have been tumbling since October with the Dow Jones Industrial Average sinking nearly 15 percent and it may continue to plunge with the shut down.

The plunge followed a propulsive winning streak for the stock market that began in 2009.

But investors are internalizing all the latest risks, including Trump’s trade war with China and higher borrowing rates, and how much they might depress corporate profits and the economy.

All eyes are turned to China after Trump imposed tariffs against a huge swath of goods from China. China has retaliated in kind with its own tariffs on U.S. products. These import taxes tend to dampen economic activity and diminish growth. 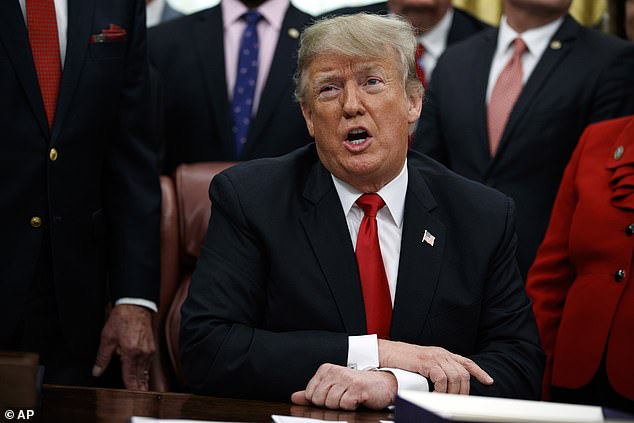 Experts say the shutdown will lead to chaos in the Trump administration, could further tumble stocks, and could weigh on the global economy

‘The trade war with China is now the biggest impediment to U.S. economic growth,’ Ian Shepherdson, chief economist at Pantheon Macroeconomics, said in his forecast for the first half of 2019.

In part because of the taxes Trump imposed on Chinese imports, manufacturing growth appears to be slowing, with factory owners facing higher costs for raw materials. The president has held off on further escalating tariffs to see if an agreement – or at least a lasting truce – can be reached with China by March.

Any damage from trade wars tends to worsen the longer the disputes continue. So even a tentative resolution in the first three months of 2019 could remove one threat to economic growth.

Jerome Powell of the Federal Reserve says that the Fed could gradually raise borrowing costs and limit potential U.S. economic growth because of the job market’s strength. But if they miscalculate and raise rates too high or too fast, it could trigger a downtown.

From a global perspective, the world economy seems to be slowing down.

U.S. trading partners in Europe and Asia are weakening or are expected to expand at slower speeds. Their deflating growth can, in turn, weigh down the U.S. economy.

Several other global risks abound. There is Britain’s turbulent exit from the European Union. Italy appears close to recession and is struggling to manage its debt. China, the world’s second-largest economy after the U.S., is trying to manage a slowdown in growth that is being complicated by its trade war with Trump.

‘Next year is likely to be challenging for both investors and policymakers,’ Alexander, the Nomura economist, concluded in his outlook.

Still, the U.S. on its own looks encouraging with unemployment near a half-century low and with tame inflation rates.

The length of the shutdown will determine should how severe these risks are and may determine the future of the nation’s financial growth.